In this week’s FPL Bottom Line feature, we’ve picked out three big hitters who look set for big returns alongside our Gem of the Week ahead of Gameweek 3.

Here are our pointers for GW3.

It was a tough afternoon against Manchester City for Spurs talisman Harry Kane; the forward lacked quality service and was drowned out of the game by the breathtaking Blues.

However, after a bright performance against Aston Villa in Gameweek 1, we hope Kane’s last outing against the reigning champions was just a blip.

Against Villa, England’s No.9 secured a brace and a Man of the Match performance.

Kane was a threat the entire game, registering six shots inside the box alone, with eight in total, demonstrating his keen eye for goal.

Tottenham have a home encounter against Newcastle in GW3 and it’s simply too enticing to cold-shoulder.

The Magpies will be lacking in confidence following a 3-1 defeat away to Norwich and are yet to keep a clean sheet this season.

Furthermore, since serving his suspension, Son Heung-min is back in action for Spurs.

The South Korean will most certainly bolster Mauricio Pochettino’s side, providing more energy and support in attack alongside Kane.

Manchester City face-off against Bournemouth this weekend, with the Cherries having never beaten the Cityzens in their 14 previous league meetings. City have a 100%-win record in the past eight games against Bournemouth, winning by an aggregate score of 25 to just 3 conceded.

It should come as no surprise that we’re advertising the superb Raheem Sterling in this week’s FPL Bottom Line feature following his remarkable goalscoring form.

Presently, Sterling is averaging 13 points per game after producing a 20 point haul against West Ham on the opening game of the season, providing a further six points against Tottenham in GW2.

We’ve always backed the 25-year-old for big returns when facing Bournemouth considering his impressive record against the club.

The forward has created eight goals and produced a further two assists in seven league appearances against the side, equating to a goal involvement every 62 minutes.

Once again, Razza looks set to extend his record.

After a late arrival to action following the Africa Cup of Nations, Sadio Mané found himself reattached to Jürgen Klopp’s starting line-up against Chelsea in the UEFA Super Cup final.

The Senegalese international arrived in style on his return, producing a brace and a Man of the Match performance, leading to Liverpool’s second piece of silverware this year.

In Gameweek 2, Mané made his first start of the 2019/20 Premier League campaign against Southampton and certainly didn’t disappoint.

Once again, the forward displayed another fantastic showcase, earning his second Man of the Match of the season and documented his first Premier League goal and assist since his return to the line-up.

The Reds host Arsenal at Anfield this weekend and Mané boasts a good record against the North London side.

The 27-year-old hasn’t failed to score against the Gunners on home soil since venturing over to his Merseyside club, assembling four goals and an assist since joining in 2016.

Sadio Mané would be worth considering for a straight swap with Mohamed Salah to free up those funds. 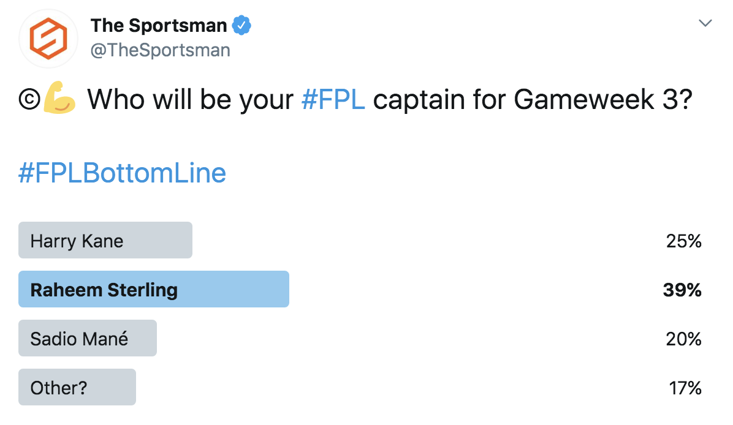 Captaincy calls are always a toughie with the fret of selecting the wrong option.

Ahead of the GW3 deadline, we reached out to our followers and asked the problematic question ourselves: Who will be your FPL captain for Gameweek 3?

The results are in and Manchester City’s Raheem Sterling leads the way with a majority 39% of votes.

We hope this helps you out and we wish you the best of luck.

Gem of the Week

We couldn’t leave this week’s FPL Bottom Line feature untouched without a Gem of the Week.

Trossard was deployed for his Premier League debut against West Ham in Gameweek 2 and looks a flashy prospect for the Seagulls.

The Belgium born winger relished scoring in front of his home crowd at the Amex.

Unfortunately, the 24-year-old was unlucky not to secure a hat-trick, scoring a volley ruled out by VAR and squandering a glorious opportunity.

All in all, a positive start.

Graham Potter’s side have made a confident start to the 2019/20 campaign and appear a different side compared to last season.

Brighton host Southampton this weekend, a team who have lost both their opening fixtures.

Selected by 0.9% of teams, Trossard looks a differential capable of capitalising on the lack of morale in the Saints squad.