The football climate of the immediate post-Second World War period can arguably be epitomised by one particular European player.

On August 20, 1945 Ferenc Puskás made his debut for the Hungarian national side, a team that across the next decade would eventually be known as the ‘Aranycsapat’; the 'Golden Team', a pride of a nation that would ultimately be destroyed not by poor management but by politics and revolution, events from which the sport in Hungary has never truly recovered.

Perhaps this is why Puskás'’ legacy shines so brightly, an almost mythical figure peaking in an unattainably romantic period of the game, unblemished (to an extent) by suspect internet video compilations, his stature decreed almost by word-of-mouth from generation to generation.

And of course that flickering flame in football folklore prevails, his name indoctrinated in the annual award for ‘the most beautiful’ goal of the year.

Puskás made his professional debut for Kispet (now Budapest Honvéd) in November 1943 against the then Nemzeti Bajnokság (Hungarian top division) leaders, Nagyvarad. Two years later at the age of 18 he won the first of his caps for Hungary, scoring in a 5-2 win over Austria, a match between two footballing powerhouses whose nous and foresight would shape tactics that had influence long after the two nations’ prestige faded away. The capital cities of Budapest and Vienna were particular hubs for intellectual debate on the beautiful game, like Vienna.

Jonathan Wilson documents the period brilliantly in his biblically seminal ‘Inverting The Pyramid: The History of Football Tactics’.

Puskás would go on to record an impressive 84 goals in 85 appearances for the national side and would  feature in two definitive football events of the mid-20th Century. 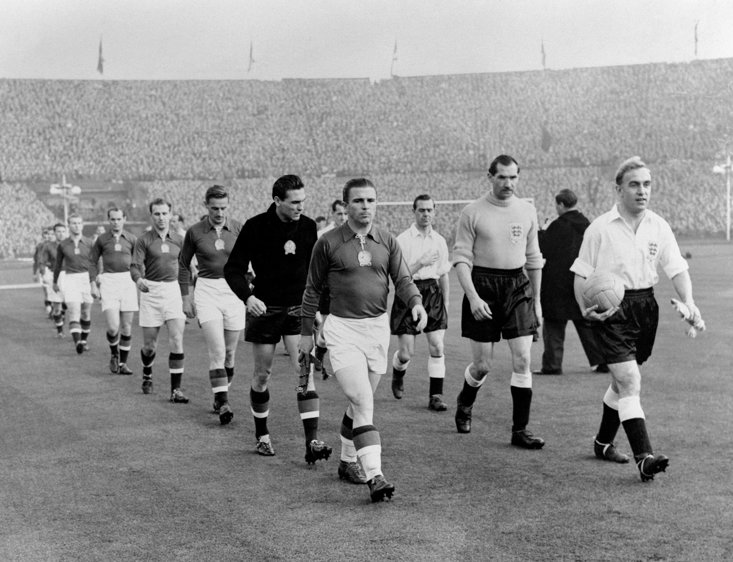 Hungary were anointed Olympic champions in 1952, yet this would prove to the bittersweet apex to the Aranycsapat. More notable was the match a year later, at Wembley in November 53; a game that pitted the Gold Medal winners Hungary against England, ‘the mother of football’.

In a game that has ‘resonated through the history of English football’ like no other, Hungary won 6-3, with Puskas scoring two of the goals. This was only the second time England had been defeated on home soil by foreign opposition (the first was against the Republic of Ireland at Goodison Park in 1949). Hungary right-back Jeno Buzanszky would say: ‘It was because of tactics that Hungary won. The match showed the clash of two formations and, as often happens, the newer, more developed formation prevailed.”

Puskás, who before the game had been denigrated as ‘that fat little chap’ by a member of the Three Lions, helped launch a relentless assault on England’s home turf; Hungary were 4-1 up after 28 minutes.

Puskás’ second goal, ‘the drag-back’ has become legendary; Puskás floored England's captain Billy Wright after collecting the ball on the edge of the six-yard box, by dragging the ball back with the sole of his left boot and, turning beautifully, perfectly, and smashing it past goalkeeper Gil Merrick. The Times described the confuddled Wright as "a fire engine rushing to the wrong fire".

Aside from Puskás’ astounding ability, what is regularly cited is his commanding leadership complemented by generosity in spirit and sportsmanship. On teammate Nándor Hidegkuti, Puskás would say: “He was a great player and a wonderful reader of the game. He was perfect for the role, sitting at the front of midfield, making telling passes, dragging the opposition defence out of shape and making fantastic runs to score himself.”

Puskas’ football beginnings began in his home city of Budapest. His father was coach of Kispest - the football club of the town the younger Puskas grew up in - but was eventually replaced by the notorious Bela Guttman with whom Ferenc would refuse to see eye to eye with. Wilson documents a pivotal occasion when Puskas overruled an instruction for Mihaly Patyi not to return for a second half, which would have brought them down to 10-men. Guttman left the stadium and resigned.

Puskas only ever played officially for two clubs in his career, in a trajectory that mirrored his national allegiance - he would also make four appearances for Spain.

He won five Hungarian league titles with Kispet but at the age of 31 he crossed the Iron Curtain and eventually found his way to Real Madrid, where he spent eight years. He won five Primera Division titles in his time at the club and, as of 2019, he remains the club’s fifth-all time highest scorer, with 240 goals in 260 appearances.

In the 1960 European Cup final, the second of his three wins with Los Blancos, in front of a 127,000-strong crowd Puskas handed the match ball to Erwin Stein of the defeated Eintracht Frankfurt, Stein having scored two of Eintracht's three goals. Puskas had scored four.

Two years later, Puskás scored a hattrick in a 5-3 defeat in one of the best European Cup finals of all time in Amsterdam in 1962. He gave his shirt to then 20-year-old Eusebio of the winning Benfica side (interestingly managed by Guttman); “A gesture”, states Wilson, “widely interpreted as a symbolic passing of the mantle as Europe’s greatest player”. Puskás had finished the competition’s top goalscorer that season, the second time in two years.

At Real Madrid, Puskás formed a formidable partnership with Alfredo di Stefano. In his first season in the Spanish capital, he and the Argentine were joint leading scorers going into one of the final games of the season, against Sevilla. In an 8-0 thrashing of the Sevillistas, Puskás, already with a brace to his name had a chance to score but instead waited and ultimately squared it to Di Stefano who slotted home and was awarded the Pichichi (for the fourth straight year).

Like his compañero di Stefano, however, the most prestigious award in football eluded Puskás; the World Cup. 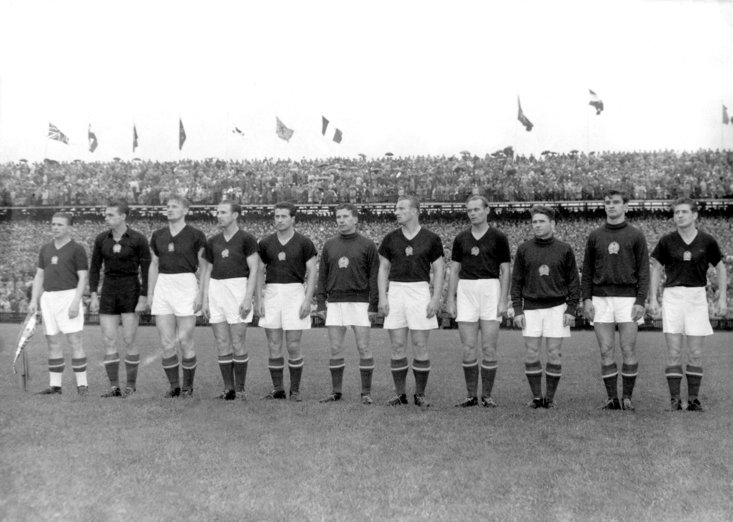 Puskás was, alongside Hidegkuti, Sándor Kocsis, József Bozsik and Zoltán Czibor, one of what Wilson deemed ‘five of the greatest players of the age’ under the stewardship of  ‘an intellectual and meticulous coach’ in Gusztáv Sebes for the Hungary side of the early ‘50s. The Aranycsapat in Wilson’s words however “remained forever unfulfilled”.

Having obliterated West Germany 8-3 in the group stages in Switzerland, Hungary threw away a two-goal lead to be defeated 3-2 by the very same side in the 1954 World Cup Final 'Miracle of Bern', Hungary’s only defeat between 1950 and 1956 (the year Puskás withdrew from the national side) - a period stretching 49 matches. Puskás had played the entire final with a hairline fracture.

Nicknamed "Ocsi" meaning little brother, or ‘buddy’, Ferenc Puskás was declared the Greatest Hungarian Footballer of the last 50 Years in 2003. He died on November 17, 2006 in his home city of Budapest, aged 79. 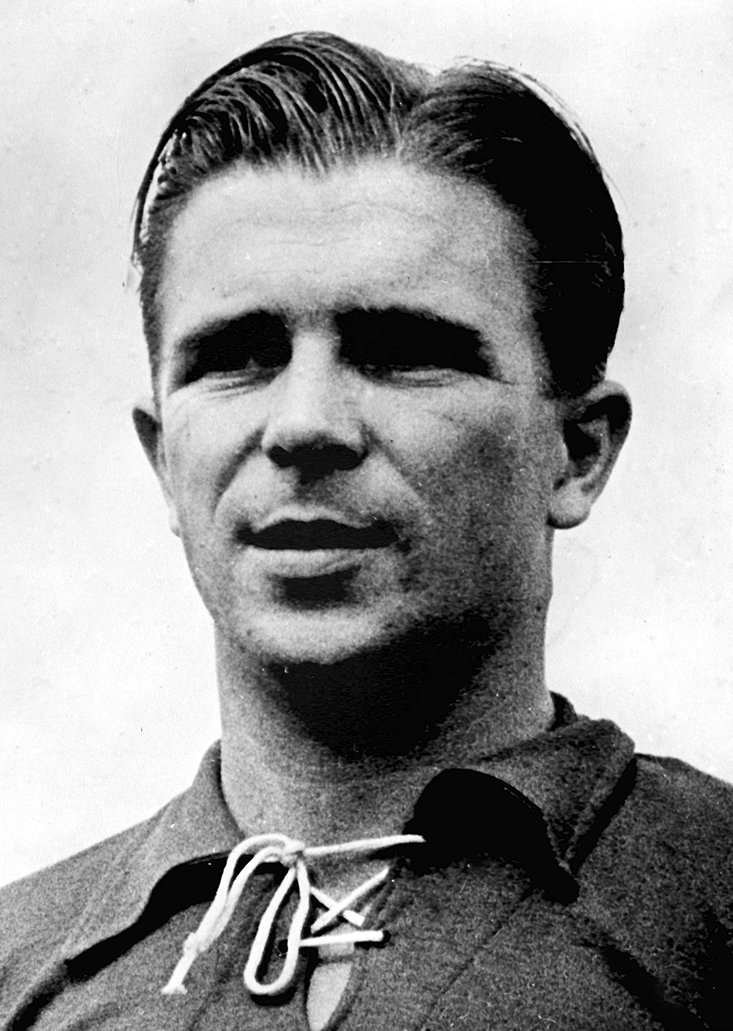