Rugby
Features
The two foes have served up some memorable contests over the years
Ross Brown
14:35, 24 Oct 2019

England barnstormed their way through a lacking Australian side and the All Blacks flattened Ireland in the Rugby World Cup quarter-finals last weekend, so to the Yokohama International Stadium we go to watch the rugby giants of either hemisphere face each other in the semi-final.

Believe it or not, this will be the 42nd time England have squared up to the Kiwis, and although history sadly isn’t on their side there are still a few classics worth remembering…

The Men From Across The Sea

The first time the teams met was way back in 1905, when the All Blacks were still an unknown quantity. It didn’t last long.

They walked over everyone in England, then marched through Scotland and Ireland before finally being stopped by a seriously impressive Wales. It didn’t bother them much; on the way home they paused in France and Canada, just to beat them too. It was like a visit from marauding vikings, just with weirder accents.

Inevitably, the next team to arrive on our shores 10 years later (that’s right, we had 10 years to prepare for this one) would become known forever as The Invincibles. It was an entirely adequate moniker. They played 32 games, including clashes with France, England, Wales and Scotland, and won all 32. But the 1925 tour is worth remembering for one reason, fact fans; the England test match saw All Black forward, Cyril Brownlie, become the first player ever to be sent off in a test match. Remember to thank us at your next rugby pub quiz.

It’s worth remembering that, with just two All Black caps under his belt, very few people had seen the 6ft 5inch winger before his 1995 World Cup debut. At a time when wingers were still considered light, nimble fast-moving assets, Lomu looked like a lost freight train, standing out on the edge of the pitch as forwards half his size battled it out in the middle. And then some bright spark would throw him the ball and all hell would break loose.

Having warmed up against Ireland and Scotland, Jonah had grown tired of running around players by the time England faced them in the semi-final: 70 seconds into the game he barrelled right through Mike Catt in the first of several moves that would see the All Blacks win 45-29 with Lomu helping himself to four tries.

Catt has always been fairly diplomatic in his assessment of that afternoon, but Will Carling (who Lomu had deposited somewhere in the stands on his way towards Catt) held nothing back: “He’s a freak, and the sooner he goes away the better.”

He’ll always be remembered for a cheeky drop-goal against a really cocky Australian side in the 2003 World Cup Final, but Mr Wilkinson absolutely covered himself in glory the previous year when the All Blacks faced England at Twickenham.

The final score that day was 31-14 to the home team and 21 of those points (21!) came from the plucky fly-half, who scored a try, two conversions, three penalties and - of course - a drop goal. That, folks, is called a ‘full house’ – again, please remember to credit us at the pub quiz.

The One And Only Draw

You would think that after 41 bruising meet and greets, there would be more than one draw between the two sides but no, rugby’s ever-changing scoring system is designed to avoid this as much as possible. And so 1997 is the only time the teams have finished level, with the game ending at 26-26 in what became known as ‘the game of the year’.

England looked set to romp away with it via three tries in the first half (not easy to do against the men in black) to put the score at 23-9. But, as you’d expect, the Kiwis swarmed back into the game and England could only watch as the score ended neatly at 26-26.

Another small point of note: The game, played at the end of December, also prevented the All Blacks from recording a 100% winning streak on their tour of Europe. Thinking about it, it’s probably worth just going ahead and calling your pub quiz team ‘The Sportsman’. 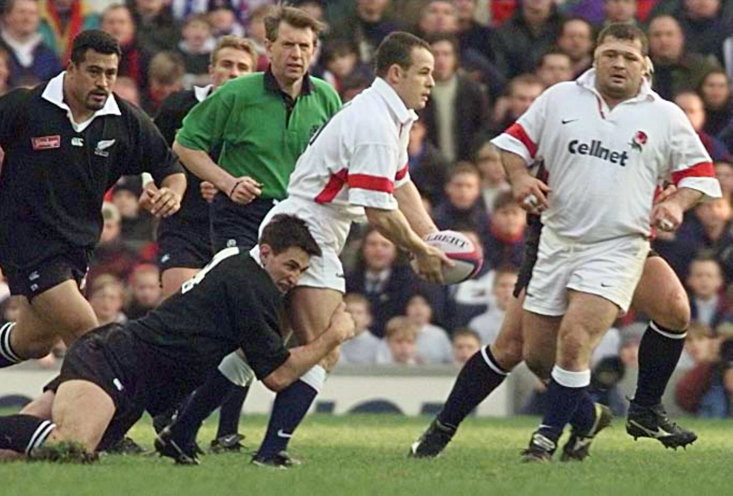 Yes, England beat the All Blacks for the first time in 1937, but forget about that because this is the game known as ‘Obelensky’s Match’ in honour of the man who scored two incredible first half tries: 19-year-old Prince Alexander Obelensky. And who said Union was an elitist sport?

The Oxford-educated prince fled Russia during the revolution and just kept on running when he got to Twickenham, traversing the pitch in a diagonal fashion to score what is still considered one of the best tries ever scored at the ground. Additionally, Obelensky became the first England rugby international to be killed in the Second World War. Just send the quiz winner’s trophy to the usual address.