“He is who he is. You can ask him about anything and he’s never going to short-change anybody. His heart and his mind is in everything he does. He’s just a great guy to be around...”

When you discover the conversation is set in the world of golf, it’s not difficult to guess who Harris English is talking about. Phil Mickelson: The five-time major winner, holder of 44 titles on the PGA Tour.

“He’s really just a goofball,” described English, “One of the greatest players ever, but still a goofball.”

“One of the greatest golfers ever” is an accurate accolade. In November 2019, Mickelson dropped out of the top 50 of the world golf rankings for the very first time. He had spent a mammoth 1,353 consecutive weeks there  - the longest consecutive streak since the official world rankings began in 1986 - having first entered into the top of the charts after finishing just behind Tom Lehman at the Casio World Open on Nov. 28, 1993. 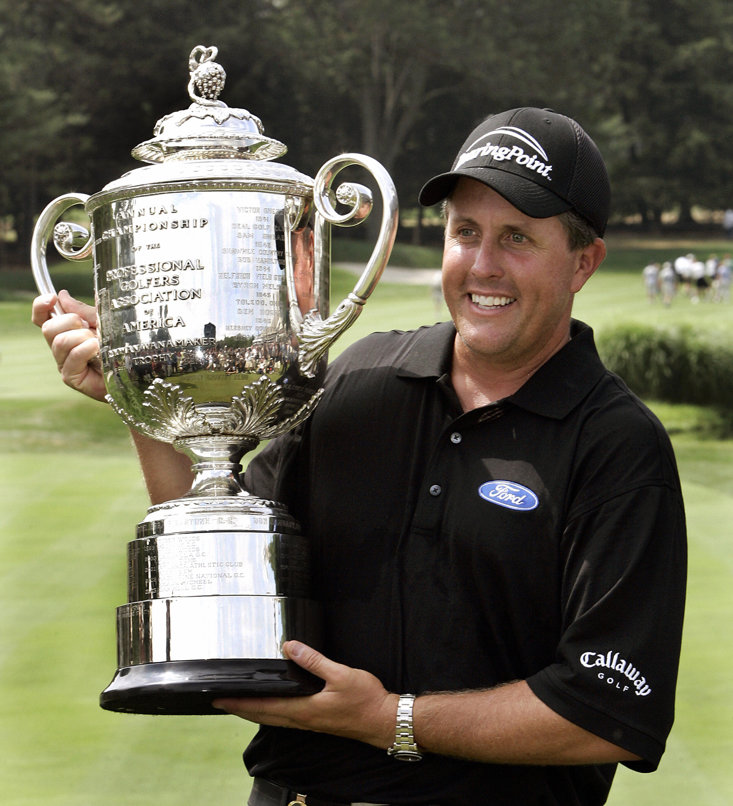 He’s also the second richest golfer in sport, behind Tiger Woods, with an estimated $89million in the bank.

His tenure at the top lasted through four presidencies, from the early days of Bill Clinton up until the current day clusterf*ck. The first major came at the 2004 Masters, a tournament he would win a further two times, the year after the PGA Championship, and in 2013, The Open Championship.

Of course, alongside those major triumphs , it’ll be the elusive US Open, the final piece of the Career Grand Slam puzzle, that still looms: having participated in the American national championship 27 times, Mickelson finished as the runner-up a record six times. Despite the numerous tournament successes, Mickelson never actually made it to the top of the rankings, being kept off top spot for a long time by a certain Tiger Woods. What should be a point perhaps of contention, animosity, and resentment instead has provided mutual respects, a barrel of laughs, and, in Mickelson, the elevation of one of the truly great characters of the sport.

Here’s when Leftie left us laughing... 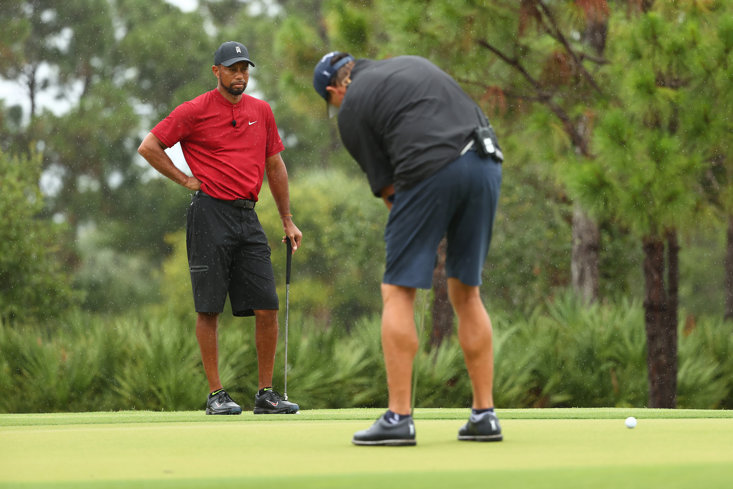 The ‘Champions for Charity’ event pitted the two friendly foes firmly against each other, occupied by NFL stars Tom Brady and Peyton Manning. On the third hole, Mickelson began rabbiting on about ‘activating his calves and begging Tiger Woods for an advantage ahead of the long-drive contest’ (GolfWeek). Woods, amused by his mate’s antics broke the fourth wall, staring directly into the camera, turning to the viewing audience and smiling, “this is what I have to listen to every time we play.”

Around a month after announcing he was entering the social media sphere with the fantastic line “I got this @Twitter thing down” accompanied by the notorious GIF of him failing to wink,  Mickelson broke the Internet again by attempting to perform an ambitiously high roundhouse kick over the head of a cringing Chris O’Donnell. That’s Chris O’Donnell, the 5’10” ‘Robin’ in the 90s Batman movies, in trousers. Why? In his words, “Because [he] can.”

Did he succeed? See for yourself.

Phil Mickelson
@PhilMickelson
High kicking over @chrisodonnell. Why? Because I can!
5362
33482

When Padraig Harrington was cruelly ejected out of the Abu Dhabi Golf Championship, after

unknowingly brushing the ball forward on the green during the opening round and signing for a wrong scorecard in the aftermath of not imposing a two-stroke penalty on himself, his comrades on the course rallied round to offer the Irishman their utmost condolences and sympathies.

Instead, Leftie jokingly taunted Harrington that it was in fact he who snitched his competitor to the golfing authorities.

"Phil came in the locker room that afternoon,” explained Harrington, “He said he thought it was very unfortunate, that the whole incident was a terrible thing to happen - and he felt really bad for bringing in the phone call.

"So Phil was great going with this line, 'Oh, I was sorry I rang in.' "But that was perfect as the only way to deal with it is to laugh. Even though it is a serious enough subject it was nice when the odd jokes that were made eased the sort of distress of it all.” 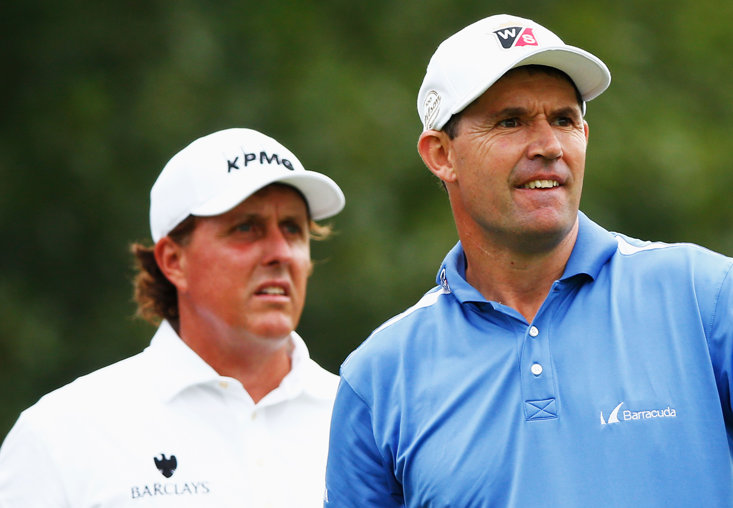 The Worst Best Piece Of Advice

“I met him at Phoenix my rookie year in 2011 and I introduced myself to him probably the first 10 times I met him because I just didn’t want to be the guy he was looking at going, ‘Who are you?’,” recounted fellow pro Brendan Stelle, “And every time he’d go, ‘Yeah, I know. I know who you are.’

“So we started playing together, the first time, was at the Players that year, with Keegan Bradley, and we played a 9-hole practice round. And I guess he liked us enough that he kept wanting us to play more practice rounds.”

“He’s such a big star and he’s done so much for the sport that you just don’t feel like you belong anywhere around him.

“But the great part of Phil is that there is nothing about his personality that makes you feel that way. He’s so welcoming, so genuine, so nice and so helpful.

“I remember the first time we ever played together, we were on No. 3 at the Players, the par-3, and short left there’s that big run off and I went down there trying to figure out the chip. And I said, ‘Phil, how do you hit this shot? This shot is so hard, you’re short-sided, it’s into the grain, what do you do?’ 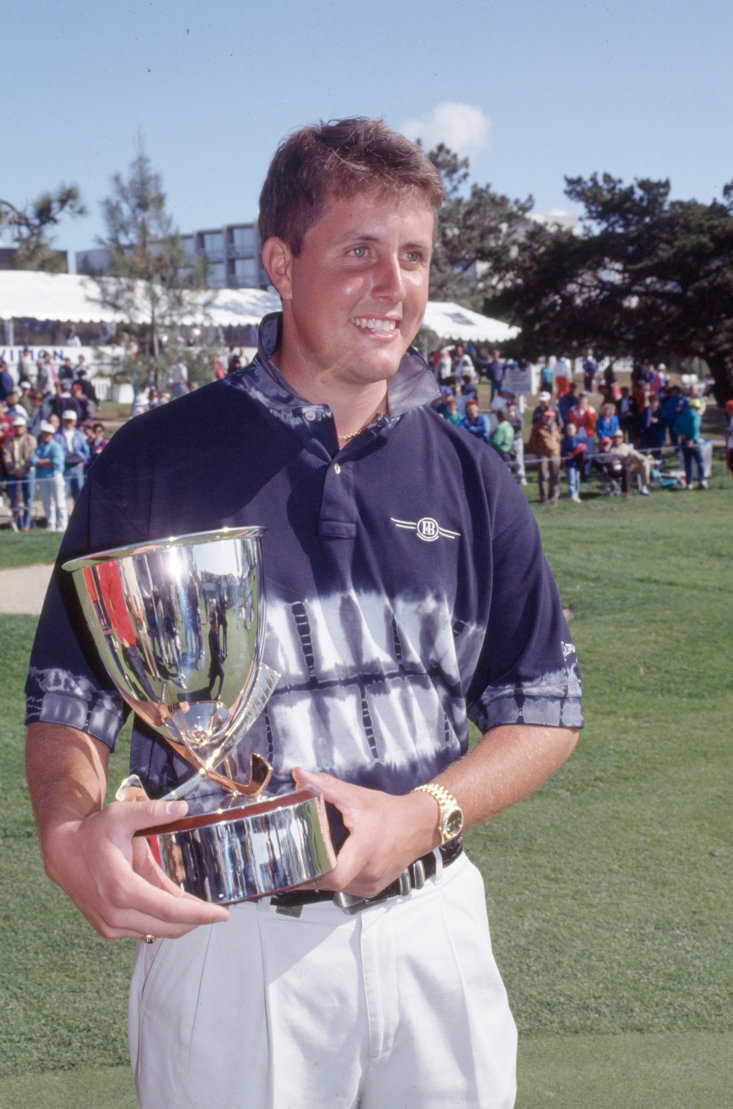 In 2018, the highly anticipated first edition of The Match rolled around, and Mickelson eventually walked away with a pretty $9million for defeating Woods across 22 holes.

The exhibition didn’t particularly demonstrate the best the two greats had to offer, with fluffed lines aplenty despite the mammoth paycheck available.

Though Mickelson bagged the win, he came under scrutiny from famed country singer and golfing devotee Jake Owen.

While appearing on Barstool Sports' Fore Play podcast, Owen revealed that he ran into Mickelson the day after "The Match" while attending Jordan Spieth's wedding, angered that he had shelled out money for the pay-per-view event.

"So I walked over to him," Owen told the Fore Play podcast. "I was like, 'Hey Phil, you owe me f**king $29.99 for wasting four hours of my life with the shittiest golf I've ever seen! You guys hype this whole thing up about the big match? You guys couldn't even make three birdies between the two of you? I want my $29.99 back and apologise to me for some shit golf!'"

Mickelson didn’t take the attack lying down. He pulled out a stack of $100 bills, thrust one in Owen’s direction and told him, "I won 90,000 of these things yesterday.