Gabriel Hanot is one of the most influential men in football history.

Not only was the European Cup his brainchild, but he also had the idea for the Ballon d’Or.

It is surprising, then, that as one trawls the internet it is evident that Hanot’s name is so rarely championed - it barely features in the annals of the beautiful game.

However, as the world gathers to see Lionel Messi (come on, who else?) crowned this year’s winner at a glitzy gala, it is proof Hanot had a monumental impact on how footballers’ talents are perceived and the adulation they receive.

A respected editor at L’Equipe following a 12-year playing career with US Tourcoing, BFC Preussen and AS Francilenne which also saw him earn 12 France caps, Hanot felt the biggest stars of the era deserved rewarding.

He and his fellow writers wanted to celebrate the achievements of the best individual performances over the year and so the winner was solely voted for by football journalists who picked their top three before the man with the most votes was awarded the ‘Golden Ball’.

And with that, the Ballon d’Or was born.

The inaugural award was met with little fanfare in 1956. In fact, when England winger Sir Stanley Matthews scooped the gong, it was presented to him by Hanot at Blackpool Town Hall. However, it sounded like the editor had a different favourite, writing in France Football: “In the right winger Stanley Matthews, there is something of Charles Chaplin; in Alfredo di Stefano, we celebrate a great knight, who brings together courage and invincibility. Stanley Matthews is light humour. Di Stefano is an epic."

At the presentation Matthews was accompanied by his wife Betty and the only other people in attendance were the Mayor of Blackpool Herbert Henson and Spencer Copeland, a supporter of Matthews’ former club Stoke, who presented him with a china plate. So quaint compared to the grandeur of the ceremony in 2019.

The French magazine’s award gained exposure over time and, following Hanot’s death in the summer of 1968, the serving editor of France Football would then hand the prize over pitchside at the player’s home stadium.

OldFootballPhotos
@OldFootball11
#OnThisDay in 1956 the first ever #BallondOr European Footballer of Year
In 2nd place was #AlfredoDiStéfano and #RaymondKopa, was 3rd. The winner was 41-year-old #BlackpoolFC player StanleyMatthews. He was presented with the trophy by the man behind the new award #GabrielHanot 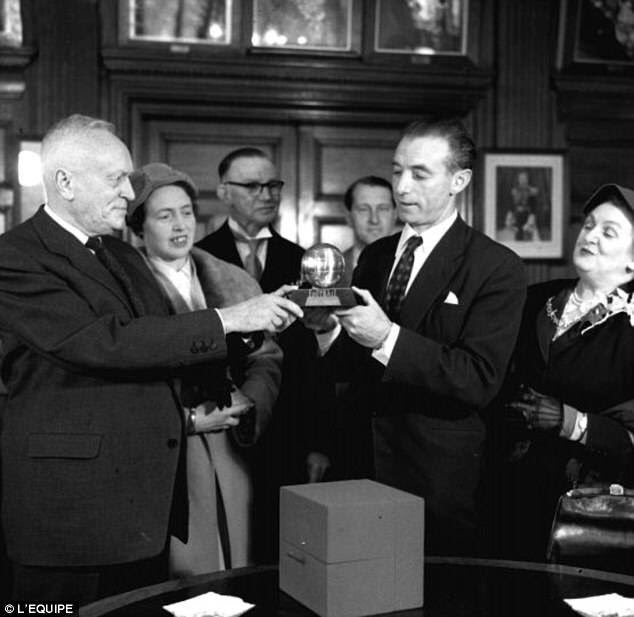 In the interests of fairness and equality, any player of any nationality representing a European club was eligible to win the award from 1995, and in 2007 it was expanded to every football star worldwide.

Astonishingly, before then, the likes of Pele and Diego Maradona, huge legends of the game, adored by millions, did not win the European Player of the Year Award as it was known upon its conception.

For the first half of the 2010s, FIFA joined forces with France Football to make the FIFA Ballon d’Or a solo prize as for so long the magazine’s award had held more weight than the world governing body’s Player of the Year gong.

However, the two corporations parted ways in 2016 and FIFA created its own ‘The Best’ award.

Now, the night is conducted by an international panel of football journalists, who vote for the players who have impressed most, picking from a shortlist of 30.

Of course, we all love goals, and so it should come as no surprise that attackers and playmakers are the main beneficiaries of the prize.

Messi and Cristiano Ronaldo have dominated the 2010s - rightly so as the two best players on the planet.

We have to go as far back as 2006 for the last defender who was victorious, with Fabio Cannavaro getting the vote after captaining Italy to the World Cup.

Last year marked another landmark as France Football handed out the first women’s Ballon d’Or at the ceremony in Paris, with Norway and Lyon striker Ada Hegerberg winning and thus writing her name into the history books.

With football being so swamped with tradition, it is both peculiar and a great shame that Hanot is not revered for his contributions to the game.

There are no stadiums bearing his name and no statue in his home town of Arras.

However, as Messi poses in front of hundreds of photographers with the world’s gaze shining on him, it should not be forgotten that it was Hanot’s appreciation of great footballers that gave us such nights of grandeur.