Jose is back, domestic football is back, and the FPL is back. This weekend will see more than six million managers return to action, so it’s not only Mourinho looking to make an immediate impact after the international break.

For those looking to be the Special One in the FPL this season, here are three easy-to-follow tips ahead of another promising weekend of Premier League action. Follow our lead, and you may well be awash with green arrows on Tuesday morning.

Back Aguero To Deliver

Coming off the back of a loss against Liverpool, Manchester City are a wounded animal and Pep Guardiola will be hoping for a fearsome response against Chelsea on Saturday. In the corresponding fixture last season, Sergio Aguero scored a hat-trick as City romped to a 6-0 win, which made them the Argentine’s favourite opponent.

Against no other side has he scored more goals, having hit 15 in 18 appearances against the Blues across his career, and in the Premier League that record reads 10 goals in 13 games. Frank Lampard’s side have made a brilliant start to the season and it should be a cracking game, but Aguero should get on the scoresheet. Consider him as captain.

Don’t Miss Out On The Leicester Juggernaut

If you haven’t got three Leicester City players already in, do it right now. With five favourable fixtures in a row starting this weekend with Brighton, you simply cannot miss out. Jamie Vardy is top scorer and a must-own striker heading into the weekend, while James Maddison, Youri Tielemans, Ben Chilwell and Ricardo Pereira are also exciting options.

Leicester are serious top-four challengers this season and you must take full advantage while their players are still ‘reasonably’ priced. It is up to you which two players you team up with Vardy, but do not miss out on these points.

Jose Mourinho’s Tottenham side will be difficult to predict as well as difficult to beat, but they could provide a chance to take a gamble and make up serious ground if you predict the line-up correctly. Players such as Serge Aurier, Danny Rose and Christian Eriksen could be reinvigorated under the Portuguese manager and points could be made up.

Many people will choose the ‘wait and see’ tactic here with Spurs facing West Ham this weekend, but if you are bold and bring in somebody like Eriksen ahead of the game, the gamble could pay off. Probably not a move to pull off if you are leading your division but if you have ground to make up and need to take risks then this could be a masterstroke. 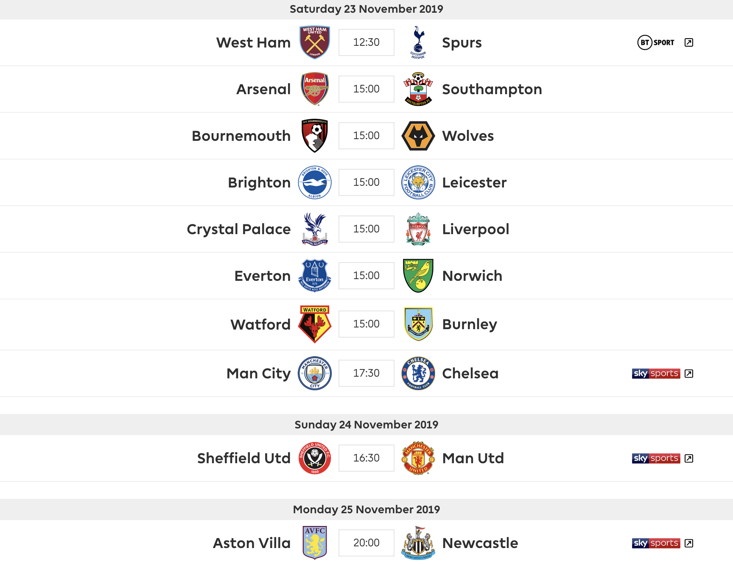 x
Suggested Searches:
Tyson Fury
Manchester United
Marcus Rashford
Lewis Hamilton
F1
Air Jordan
More
football
Ryan Giggs And The Greatest Goal In FA Cup History
Across his 24 seasons and over 900 appearances as a mainstay of the Manchester United squad, Ryan Giggs [ ... ]
boxing
The Suzie Q To The Hammer, Five Signature Punches That Changed...
The art of punching has moved on leaps and bounds since John L Sullivan won the first heavyweight title [ ... ]
football
Frank Warren On Being Shot, Benn v McClellan And Retirement...
Legendary boxing promoter Frank Warren will take centre stage this weekend as his documentary ‘Make [ ... ]
football
The Big Interview: Jamie Carragher On England Regret, Liverpool...
The Sportsman were lucky enough to sit down for a lengthy chat with former England international, Liverpool [ ... ]
football
On This Day: A 17-Year-Old Alan Shearer Announces Himself To...
On April 8, 1988, a relatively unknown and somewhat scrawny teenager by the name of Alan Shearer, opened [ ... ]
golf
“Hello World, Huh?” When Tiger Woods Announced His Arrival On...
The north suburb of Brown Deer, Wisconsin, at the Brown Deer Park Golf Course.  A stage has been [ ... ]
football
Jamie Carragher On England’s Euro 2020 Hopes, Southgate And...
“Listen, all this nonsense that people talk about you have got to play the best teams to win it, [ ... ]
boxing
When Buster Douglas Shocked The Boxing World By Beating Iron...
What do you do when you’re given a 42/1 ‘not-a-chance-in-hell’ price for victory?  [ ... ]
boxing
The Hardest Puncher Ever Born: The Sportsman Interviews Earnie...
It was in 1977 at Madison Square Garden that Shavers pushed Muhammad Ali all the way to fifteen [ ... ]
football
EXCLUSIVE: FC Porto's Toni Martinez Talks Champions League,...
Toni Martinez let out a roar of elation. On his knees and with clenched fists, the emotion poured out [ ... ]
football
Rushie To Everton And Diego Dates Madonna - The Best Footballing...
It was the equivalent of Virgil van Dijk appearing on the front cover of FourFourTwo in a [ ... ]
boxing
Outside The Ropes: Steve Wood - The Promoter, The Manager And...
The Sportsman delves deeper into the world of professional boxing to uncover the stories away from the [ ... ]
motorsport
From Senna to Schumacher - The Five F1 Families That Changed...
On 31 March 2001, at Interlagos, Ferrari driver Michael Schumacher recorded his seventh consecutive [ ... ]
football
Ollie Watkins' Former Coach On His Incredible Rise From Non-League...
Ollie Watkins is used to making an immediate impact. Joining sixth-tier side Weston-super-Mare on loan [ ... ]
football
An Ode To Goodison Park As Everton Prepare To Bid Farewell To...
It is finally happening, Everton are leaving the Grand Old lady, Goodison Park, one of the most recognisable [ ... ]
rugby-league
Your Club-By-Club Guide To The 2021 Betfred Super League Season...
Happy New Year! Tonight marks the start of 2021 for Betfred Super League fans, with the first two matches [ ... ]
rugby-league
Your Club-By-Club Guide To The 2021 Betfred Super League Season...
The Betfred Super League is back! Friday brings the first two games of the new season as rugby league’s [ ... ]
football
How A Big Rangers Fan Helped Plot Brora's Huge Cup Giant-Killing...
“I didn’t think it could get any better after last week but it’s definitely [ ... ]
horse-racing
Horse Racing Has Lost A Legend In Sheikh Hamdan Al Maktoum
Sheikh Hamdan bin Rashid Al Maktoum, one of the most influential owner/breeders of flat racing over [ ... ]
rugby-league
How York's Super League Ambition Led O'Hagan To Swap Australia...
Brendan O’Hagan could have taken the easy choice. As Australia was coming out of the other side [ ... ]
athletics
Being Unbeatable To Feeling Broken, Now Jodie Williams Is Ready...
“Do not be afraid to speak up. That is definitely something that I really struggled with, admitting [ ... ]
boxing
Outside The Ropes: Curtis Woodhouse - The Premier League, The...
The Sportsman’s new feature series ‘Outside the Ropes’ delves deeper into the world [ ... ]
football
Balotelli, Boateng and Berlusconi Aiming To Make Monza History...
Monza is a massive part of Formula One history, having hosted Grand Prix races on the iconic [ ... ]
rugby-league
New Stadium And New Ambitions For York City Knights In 2021
It’s hard to believe when stood in the LNER Community Stadium, the new home of the York City Knights, [ ... ]
football
How Lewes FC Are Leading The Football World As The First Among...
“I read a staggering statistic the other day and it was that 0.004 percent of sponsorship [ ... ]
football
Barnsley's CEO On Valerien Ismael's Golden Touch As Reds Close...
“I would be lying if I said I thought this would be as successful as it has been. Did I believe [ ... ]
football
30 Years On From His Man United Debut, Ryan Giggs' Legacy Will...
Ryan Giggs was always destined to be a star.  “Myself and Bryan Robson went to see the youth [ ... ]
darts
From Phil Taylor To Tiger Woods, Five Athletes Who Dominated...
We all adore sport when it is at its most competitive. Close title races, match points and play-offs [ ... ]
football
Everton ''Momentum Is Coming'' Under Ancelotti, Says Merseyside...
Kevin Campbell insists Everton are on the right track with Carlo Ancelotti at the helm but believes [ ... ]
football
Jordan Henderson The Key In Liverpool v Everton Derby, Says...
Liverpool and Everton go head-to-head in the 238th Merseyside derby on Saturday. While the Reds are [ ... ]