French rugby league had never known as important a weekend as this one. Catalans Dragons were in their first Grand Final, Toulouse Olympique were competing for a place in the Betfred Super League. While the Dragons’ narrow defeat to St Helens in the northern hemisphere’s showpiece was a blow, arguably the bigger result saw Toulouse double the number of clubs from l’Hexagone in next year’s top flight.

Their 34-12 victory over Featherstone Rovers in the Million Pound Game confirmed Toulouse’s promotion, meaning that France will have two Super League teams for the first time in 2022. Add in the Catalans’ achievements over the last 12 months, and this has been a real breakthrough season for the country.

“It will be great for French rugby league. More French players, two Super League sides and a French derby,” Dragons captain Benjamin Garcia told reporters on Saturday, insisting that even in defeat Catalans had made a huge impact in their home nation.

“You cannot imagine how it is for the fans in the south of France at the moment. Think of the fans first, because it’s really difficult to come with Covid and passports, but everyone was at the bars in front of the TV tonight.” 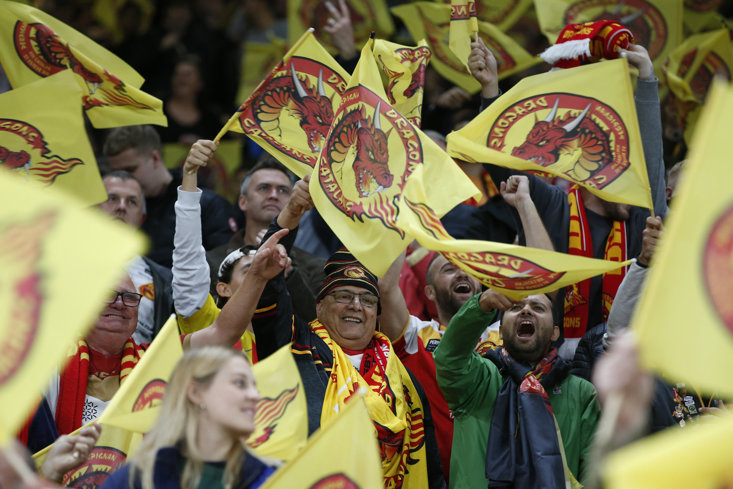 Dragons coach Steve McNamara was also keen to impress just how much the paradigm has been shifted by the achievement of both Catalans and Toulouse this season.

“What this has done is it has opened up a brand new market, it has exposed everyone to a whole new scenario with the Catalans, with French rugby league,” said the former England head coach. “There are TV cameras here from Barcelona, from Paris, all the national papers in France. But I think it has opened everyone else’s eyes as well to what can be achieved if we give teams the opportunity. It’s been a huge effort from everybody at the club.

“I don’t think the result detracts from the impact. I think the disappointment of not winning the Grand Final is more internal, it’s out there to be seen and it’s been seen in so many parts of France. I don’t think winning it will change too much. It’s opened the door now, and we’ve got to keep that door open and keep pushing. There’s Toulouse, the World Cup in France which is coming up in 2025, it’s very important for the game, and if we can keep the momentum up it will only make our game stronger.”

McNamara was also quick to talk up the French players who have played such a key role in his side’s successes.

“People talk about the young French players we’ve got, but Ben Garcia, Julien Bousquet, they’re as good as any player in the competition. They don’t quite get the credit they deserve and the Dream Teams and all this, and it disappoints me at times because they are some of the best players in the competitions.

“Yes, our young players are coming through, and Mickael Goudemand had to play in the second row in the Grand Final and is normally a middle, but across the board everyone’s played their part. I’m so, so pleased that there are some young French players who are getting some opportunities and showing everyone what they’re worth.”

Toulouse’s promotion will mean greater opportunities for French stars, although the logistics of turning out a French team in a British competition will continue to be something of a handicap, as McNamara pointed out to The Sportsman.

“The disappointment is sickening at the moment, because of how much is invested. I know everyone invests every year in every club, but this is different given what our owner has done to keep us going, what the players have done in terms of the travel and commitment and everything else, so this one’s a real kick in the teeth. But we’ll be back, don’t worry about that.

“It’s very hard from a distance to understand it and appreciate the effort of the fans,” he continued. “There were two of our staff in the office this week filling in 800 passenger locator forms for everybody, day two tests that you have to pay for which are hard to understand.

“They’d changed the passport rules since French people travel on identity cards mainly, but we couldn’t do that from October 1 so people were trying to get emergency passports. The cost was pretty astronomical for people to come across as well. The effort is absolutely incredible, and that is probably the most gut-wrenching thing, that we haven’t got the trophy to take back to them, who invested so much in it.”

The future is bright though. Catalans came within a single score of besting the whole of Super League, and now Toulouse are ready to share the top table with them. Watch out for what French rugby league is set to offer in 2022.

“I don’t know how Sam Tomkins has got on the field, but he has. It was a Grade 2 Medial injury, he played with injections and it could have shut his leg down but it took the pain away enough for him to play. Matt Whitley broke his hand in the first minute of the game, Ben Garcia broke his hand in the game, Dean Whare has torn his pec. It was that type of game, but they just kept turning up.

“Even during warm-up I half-expected the physio to come in and say he wouldn’t play.”