Football
Features
Nobody knows how to celebrate quite like a Premier League footballer
Kris Voakes
14:10, 23 Oct 2021

It's been a full decade since Mario Balotelli lifted his shirt in Manchester City's 6-1 rout of local rivals Manchester United, the Red Devils' worst home defeat since February 1955, and displayed those three iconic words: "Why Always Me?"

To celebrate such a memorable moment, we decided to look over the best celebrations, from Balotelli to Bullard, we've ever seen in the Premier League...

THE OUT OF LINE WITH ROBBIE FOWLER

“He was pretending to eat the grass,” said the shadiest defence lawyer this side of Saul Goodman, when Gerard Houllier was asked to explain Robbie Fowler’s goal celebration against Everton in April 1999. Fowler had, of course, been getting it in the neck from Everton fans, with totally unfounded allegations of his fondness for a particular Colombian export. So when he slammed home a penalty for Liverpool against their city rivals, he got down on his hands and knees and dragged his nose along the big white painted bye-line, to produce one of the most controversial gestures in Premier League history. 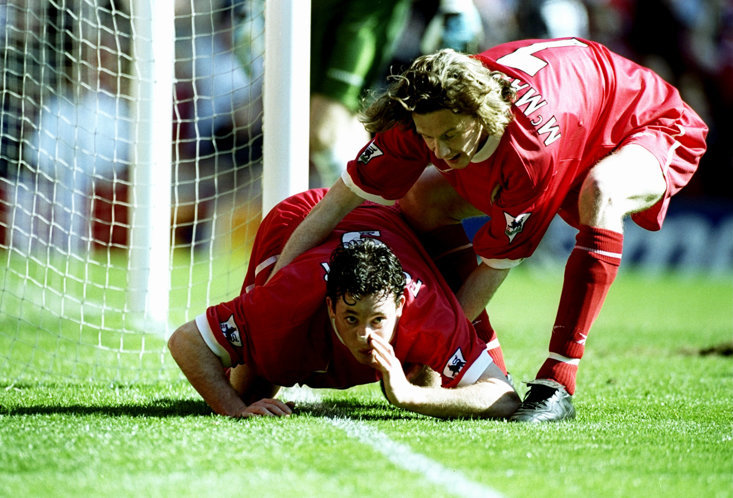 Houllier’s straight-faced explanation had nobody convinced, least of all the FA, who banned Fowler for four games.

THE SUBLIME WITH ERIC CANTONA

The question with Cantona is which one? There was, of course, the time he swung off the stanchion behind the goal to celebrate equalising against Liverpool, stopping just short of jumping into the crowd on his return to action, eight months after he went hurtling feet-first into a Crystal Palace fan at Selhurst Park.

But surely the most iconic was the sheer look of brilliant arrogance as he stood with arms aloft, taking a slow turn to survey all around him after delivering a sublime chip over Sunderland keeper Lionel Perez in a 5-0 Manchester United win in December 1996. It was a perfect reflection of the aura around the scintillating Frenchman.

THE TEAM TALK WITH JIMMY BULLARD

Hull City’s first-ever season in the top flight will forever be remembered for the moment Phil Brown shunned the warmth of the dressing room for the freezing cold Etihad Stadium pitch to conduct his half-time team-talk, with his side 4-0 down against Manchester City on Boxing Day 2008. 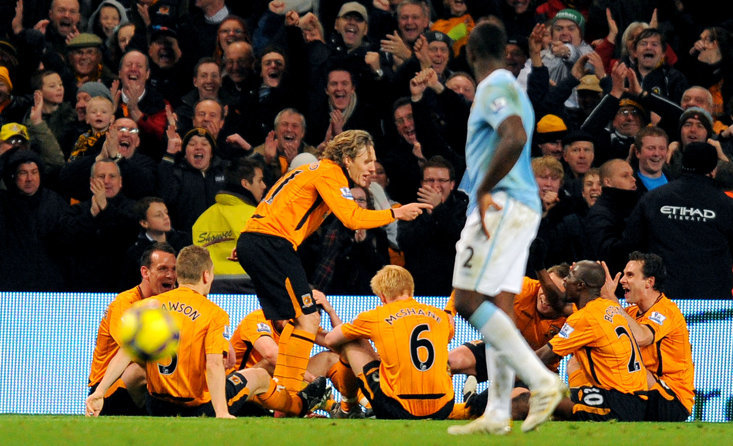 And the Tigers’ second campaign in the Premier League will forever be remembered for Jimmy Bullard’s recreation of his gaffer’s unforgettable faux-pas. Having equalised from the penalty spot with just eight minutes to go, Bullard had his team-mates congregate around him and proceeded to wag a finger of fake disapproval, sparking laughter among fans of all persuasions. Brown himself was understandably slightly less amused!

THE QUESTION WITH MARIO BALOTELLI

Why always this celebration? Because nobody will ever forget the act itself or the incredible game, that’s why.

Just 36 hours before the Manchester derby at Old Trafford in October 2011, Mario Balotelli had caused £400,000 worth of damage to his bathroom (that’s a lot of bathroom right there!), after he and his friends attempted to set off fireworks from the window. It was the latest in a lengthy list of misdemeanours from the headline-grabbing Italian forward, so when he netted the opener in City’s unforgettable 6-1 trouncing of United he unveiled the inquisitive ‘Why Always Me?’ printed vest which would become so iconic. We never did find the answer.

THE KNOCKOUT WITH WAYNE ROONEY

Who needs a well-crafted social media post to respond to press criticism when you can use a goal celebration to deliver the ultimate counter-punch? Wayne Rooney’s goal in Manchester United’s 3-0 win over Tottenham in March 2015 gave him the perfect chance to make a joke of the video which had emerged that morning showing him being knocked out by former team-mate Phil Bardsley during a friendly sparring session in the England captain’s kitchen. As you do. 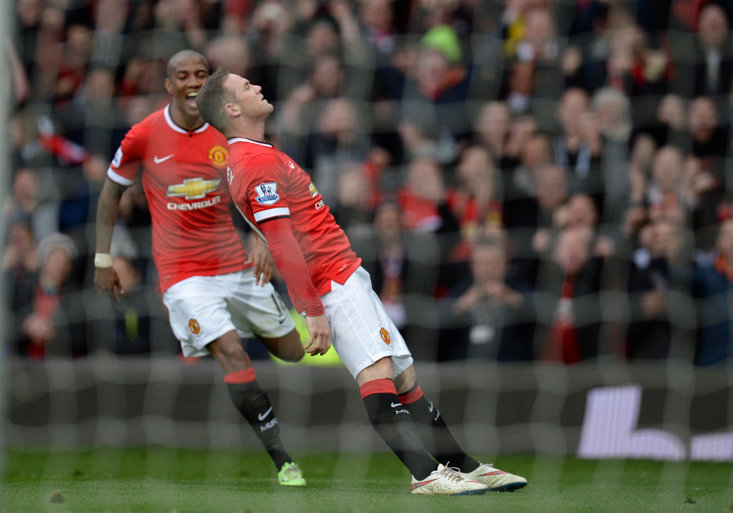 After finding the back of Spurs’ net, Rooney threw a few fake punches, then recreated his dramatic fall against Bardsley by collapsing backwards onto the Old Trafford turf. No longer a huge drama, the story was now little more than a light-hearted explanation of a memorable Premier League moment. Killer blow, Wayne.

THE PAYBACK WITH EMMANUEL ADEBAYOR

“Emotions took over me, and I feel sorry for what I have done,” said Emmanuel Adebayor after this one, but surely we’ve all wanted to do what he did at some stage in our life?

Adebayor had just been sold by Arsenal to Manchester City for £25.5m when the two teams met at the Etihad Stadium in September 2009, so when he bagged City’s third goal in a 4-2 win over the Gunners every Premier League fan would have been anticipating something special to come.

The Togolese front man ran the full length of the pitch before sliding on his knees in front of the Arsenal supporters who had been taunting him over his departure from north London, with rabid gestures and verbal taunts the inevitable response from the visitors’ section.

Beats the feigned hand-up apology of many an ex-hero, if you ask us.

THE ORIGINAL WITH FABRIZIO RAVANELLI

We all copied this one. Whether on the park kicking the ball about with brothers and sisters, or on the Sunday League pitch, or even delivering an unusual greeting to the neighbours after a long night bringing in the New Year – that last one wasn’t yours truly, honest. Yes, at one stage or another we surely all ‘did a Ravanelli’ by pulling our shirt over our head to mimic the Italian striker who made the celebration famous on his Premier League debut for Middlesbrough in August 1996. 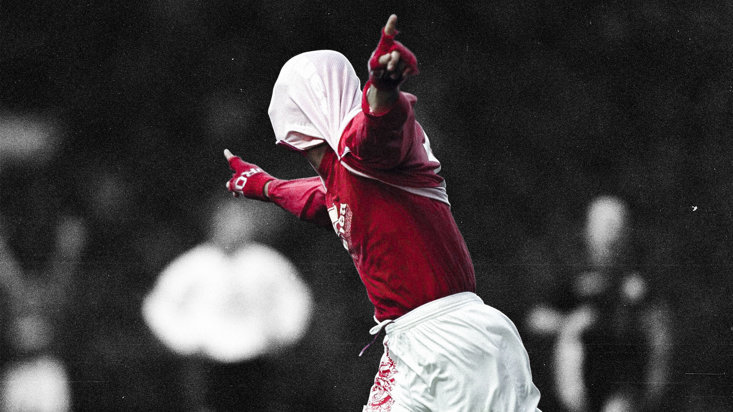 Perhaps he had more reason to do it than we did, since he scored a hat-trick against Liverpool and we just megged our two-year-old sister/bounced one in off the injured keeper’s knobbly knee/had one Guinness too many, but we all loved reproducing the White Feather’s moment in the Riverside sun, which remains one of the top flight’s most iconic sights.

THE ROBOT WITH (WHO ELSE?!) PETER CROUCH

The man, the myth, the Robot.

The Premier League got this celebration second hand, since Peter Crouch first unveiled his now-legendary moves in a couple of England friendlies shortly before the 2006 World Cup. He would later explain that it came from a throwaway joke at David Beckham’s pre-World Cup party, when he promised Jamie Carragher he would do something daft on the way back from the toilet. Carragher tipped off an ITV cameraman in attendance, Crouchy chose to do the Robot, and a legend was born.

So when the Stoke City striker netted his 100th Premier League goal against Everton 11 years later, he brought the infamous robot moves out of hiding to the delight of English football fans everywhere.

x
Suggested Searches:
The Sportsman
Manchester United
Liverpool
Manchester City
Premier League
More
boxing
On This Day: Sugar Ray Leonard Edges Past Marvin Hagler In Titanic...
"How do you like it, how do you like it?!"   The commentator's words rang out [ ... ]
football
''I Believe In Fairies'' - The Life And Times Of The Extraordinary...
Brian Clough wasn’t just one of the most quotable managers in English football’s long history, [ ... ]
football
Rangnick Right About Fourth Being United's Ceiling, But He Shouldn't...
"We want to finish fourth in the league, this is the highest possible achievement we can get.” [ ... ]
boxing
Angelo Dundee: Three Masterpieces From Boxing’s Greatest Trainer
Perhaps the greatest cornerman of all-time, Angelo Dundee guided the careers of sixteen world champions [ ... ]
boxing
The Day Ali Talked A Suicidal Man Down Off The Ledge Of A Beverly...
Wilshire Boulevard in Los Angeles cuts right through the heart of Beverly Hills. One particularly famous [ ... ]
boxing
From Broadway To Hostage Negotiation: Ali's Best Moments Outside...
Muhammad Ali transcended the world of not just boxing, but sport as a whole, like no other athlete who [ ... ]
football
Zaha's Double, 1989 And 'Poogate': Inside The Brighton v Crystal...
This article first appeared in The Sportsman on 27th September, 2021 Crystal Palace against Brighton [ ... ]
boxing
George Foreman’s Faith: How The 45-Year-Old Heavyweight Stunned...
George Foreman swept through the heavyweight division like a hurricane, obliterating nearly all who [ ... ]
boxing
Last Round, Folks: When Boxing’s Invisible Champion Was Blitzed...
History has not been kind to Floyd Patterson. Countless world champions have drifted through the annals [ ... ]
boxing
The Life And Times Of Heavyweight Legend Jack Johnson
What do Alan Turing, The Doors frontman Jim Morrison and the comedian Lenny Bruce have in common? These [ ... ]
boxing
Pacquiao: From Poverty-Stricken School Drop-Out To Eight-Weight...
"I knew without a doubt I would become a fighter - I knew that the underdog can, and often does, [ ... ]
sports
Hulk Hogan, Mr. T And Madison Square Garden's Five Greatest...
It’s named after the fourth President of the USA. It’s where George Harrison had his concert [ ... ]
snooker
VR Mishaps, Pig Farms And American Hustles: When Ronnie O’Sullivan...
As it's snooker legend Ronnie O'Sullivan's 46th birthday, we thought we'd take [ ... ]
sports
Meet The Man Who Climbed Everest, Partied For A Week, Then Climbed...
This article first in The Sportsman on 08/12/19 There’s nothing normal about Nirmal Purja. After [ ... ]
motorsport
Frank Williams - A Formula One Pioneer Whose Team Went To The...
For much of the 1980s and 90s, Williams Racing was the biggest name in Formula One and Frank Williams [ ... ]
football
How Cantona Made Manchester United The Dominant Force Of The...
It started with Leeds United making an enquiry about signing Denis Irwin and finished with Manchester [ ... ]
football
Almost 30 Years Since THAT Goal, Davide Gualtieri Is Still San...
8.3 seconds, 28 years ago. That’s all it took for part-time footballer, part-time computer [ ... ]
boxing
River Wilson Bent Talks Coventry City, Newborn Baby And British...
“Imagine if Coventry City made it to the Premier League and I brought the British title home for [ ... ]
football
Neil Warnock - The Record Breaking Football Lover That Just...
When the whistle blows at Kenilworth Road for Luton Town's home match against Middlesbrough on Tuesday [ ... ]
football
Leicester's City Progress Is Proof That Vichai's Vision Has...
On this day three years ago Leicester City lost their influential owner, Vichai Srivaddhanaprabha in [ ... ]
rugby-league
The Birth Of The Grand Final: Rugby League's Biggest Of Big...
“I’ve said it for years… the last game of the season should be the most important,” [ ... ]
football
Celebrating Arsenal's Invincibles With The Stats That Tell The...
There’s Sergio Agüero winning it in Fergie time. Liverpool finally ending 30 years of hurt [ ... ]
motorsport
On This Day: Rookie Lewis Hamilton Loses F1 Title In Controversial...
On this day in 2007, we witnessed perhaps the greatest end to a Formula One season we have ever seen. [ ... ]
motorsport
How Lauda's 140mph Crash Marked The End Of The Age Of Innocence...
There are few worse moments to lose control than when driving at 140 miles per hour. The events on just [ ... ]
football
FA Cup Round-Up: Brilliant Buxton Make First Round As Dorking...
It was a night when Dorking Wanderers saw their dreams dashed by Hayes and Yeading, Stratford made some [ ... ]
us-sports
Celebrating Jim Brown - The NFL Movie Giant Who OJ Robbed Of...
Before OJ there was the OG. The Original Gangster. In fact he was front and centre of an action-packed [ ... ]
football
Sheriff Tiraspol - The Champions League Club With Two Faces
On the surface, it has been the underdog story of the Champions League so far. Never before has a club [ ... ]
boxing
From Taming Tyson To Bashing Buster, Evander Holyfield’s Best...
Today marks the 59th birthday of one of the best boxers to lace up a pair of gloves in the modern [ ... ]
football
Fernando Torres - Atletico's Local Hero, Liverpool's Tainted...
‘This means more’ is Liverpool’s oft-derided motto, but when they face Atletico Madrid [ ... ]
football
On This Day In 1987: The Rangers v Celtic Shame Game
Whatever the circumstances when Rangers face their Glasgow neighbours Celtic the [ ... ]