Tennis
Features
How Perry went from Wimbledon champion to create one of the most iconic British fashion brands ever
Jack Porter
16:00, 12 Sep 2020

“I’m a great believer in trying to look the part. It’s a fetish with me.”

For the longest time, even in death, the figure of Fred Perry loomed largest over the All-England Club and British tennis as a whole. Perry carried a blessing and the burden, an honour and a reminder that cut deep into the sport, posthumously prevailing long after his passing after attending the Australian Open in February 1995. The Stockport-born great’s three Wimbledon titles were the benchmark for every British male tennis player to attempt to emulate for an astonishing 77 years, from his last in pre-War London in 1936, until Andy Murray was finally able to break the curse at The Championships in 2013. 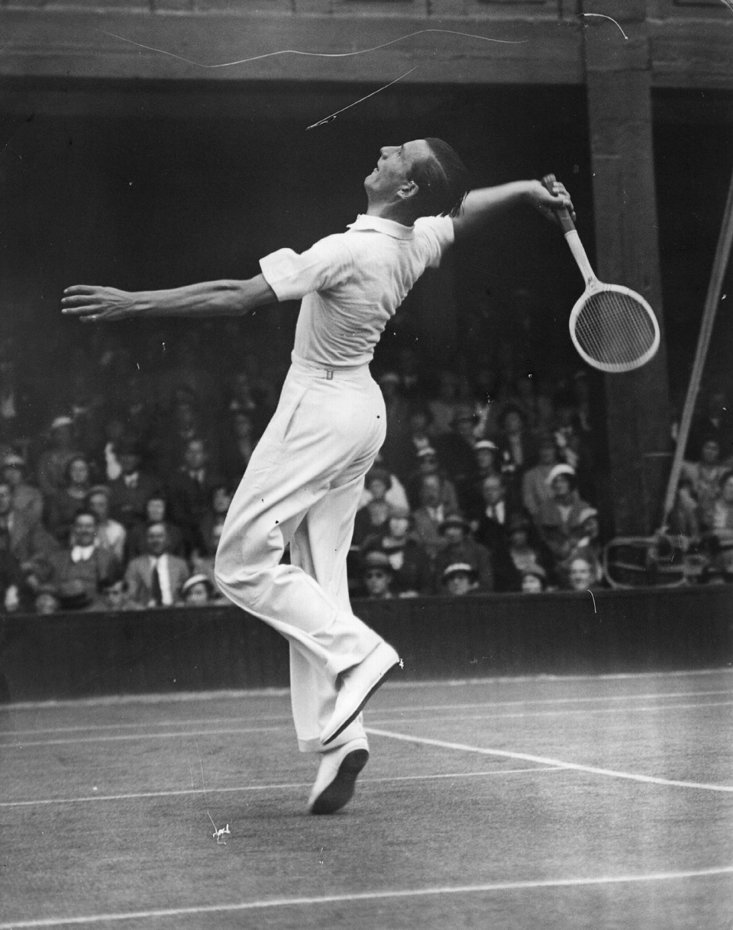 Perry had remained a perpetual cultural icon hovering in the background through generation after generation of disappointing home turf attempts at Wimbledon, not just because of his doubtless achievements on the tennis court, but also thanks to the famous fashion brand that bears his name. Today, a quarter of a century after his death, and a brace of Murray Wimbledon wins that have gone some way to heal the hurt, the sports clothing brand is arguably more famous than the man who gave his name to it.

How was it ever thus?

The son of a Cheshire cotton-spinner, Perry’s contrasting background to the privileged tennis elite of the 1930s immediately marked him as an outsider. He substituted decorum for desire, regards for rules with ruthlessness, and his ultimate eight Grand Slam titles irked those who saw him as infiltrating and besting the bourgeois, especially those trip-triumphs in London. It was a character-building layer that seethed through his later, post-racquet ventures. In his autobiography, Perry wrote, "Some elements in the All England Club and the Lawn Tennis Association looked down on me as a hot-headed, outspoken tearaway rebel, not quite the class of chap they really wanted to see winning Wimbledon, even if he was English.”

But win he did. Lots of times. Fred Perry was the first player in history - and still only Brit - to complete the heralded major clean sweep, winning all four Grand Slam tournaments, Wimbledon and the U.S Championship on multiple occasions, between 1934 and 1936. But what's more, he brought tennis to Tinseltown. There were games of doubles with two of the movie world's biggest stars of the day, Charlie Chaplin and Groucho Marx. And he was seen with legends of screen, Marlene Dietrich and Bette Davies, on his world famous forearm. 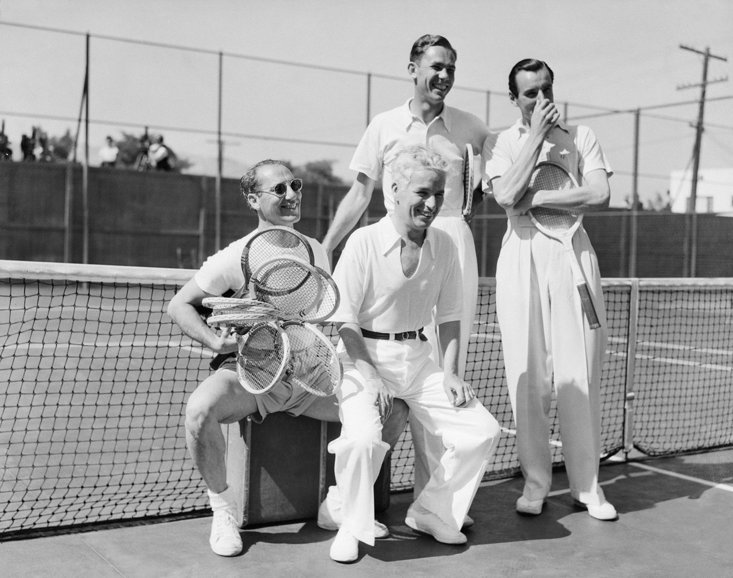 So the fashion itself, when it arrived in his post-playing career, was automatically tinged with ‘cool’, even if the word wasn’t in wide use. The rebel, and one time outsider, who became as quintessentially British as Bond, the Beatles, or Big Ben.

It happened, as these things often do, with an approach. In the late 1940s a former Austrian football player with a background in textiles, Tibby Wegner, was attempting to invent a wrist-worn antiperspirant, what would become the world’s first custom sweatband. Fred Perry played tennis with a cobbled-together piece of gauze wrapped around his wrist, preventing the sweat from dripping down and loosening his grip on his racquet; in a sense a prototype to Wegner’s idea. Furthermore as well as being a bloody good tennis player, Perry was style personified, augmented by his glamorous Hollywood lifestyle: by his own admission, “I was generally regarded as the best dressed player of my time.” As Sports, Style, Fashion so brilliantly described, Perry “played in clothes that Fred Astaire would have danced in”.

A chance meeting in a South London restaurant later, and the soccer star and the slammer were collaborating to launch their own edition of the sweatband accessory ,accompanied by a recognisable logo, the laurel wreath, that was based on the original symbol of the location of Perry’s most famous successes, Wimbledon. The new sweatband became the first product in their clothing line. And so, ‘Fred Perry’ the brand, was born.

As the tennis titan’s career wound down, fashion became even more the focus. Designed by the man himself, the white M3 was the original one colour Fred Perry shirt, as the brand itself today retrospects, “perfectly fusing practicality and wearability both on and off the court.” Launched at Wimbledon in 1952, the polo became an immediate success, thanks to its elevation by being worn by finalist Jaroslav Drobny, incredibly with a pair of sunglasses, while he was actually playing, and its soon-to-be-synonymous famed ‘Fred Perry fit’ a streamlined silhouette with a focus on lightweight functionality. More colours soon became available and it was becoming worn well beyond the sporting arenas and parameters of performance. Sport and everyday society were becoming synergised, a phenomenon that would soon be cemented. 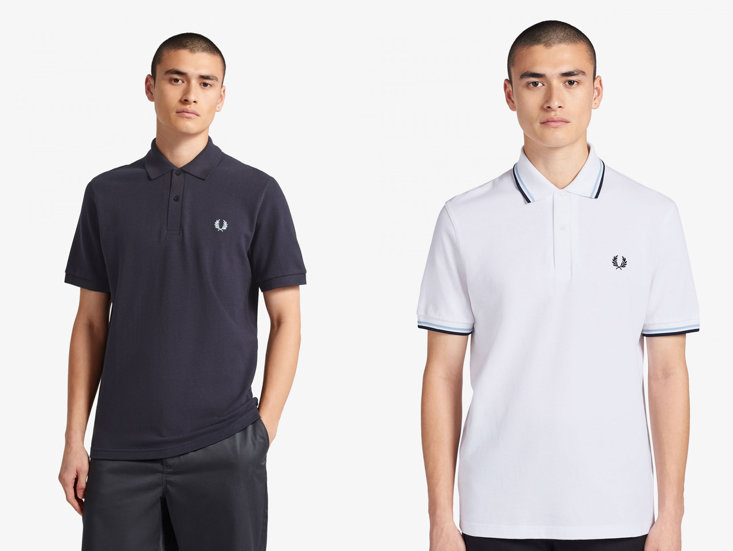 The arrival of the M12 marked the original twin-tipped ‘Fred Perry’ shirt, now its signature. It was, as the brand subsequently declared, the thing that took ‘Fred Perry’ from sportswear to streetwear. That laurel wreath was of course ever present.

With tennis enjoying a resurgence in the sixties and as the Mods took to the beaches, the brand surprisingly became a uniform of both players and the fashion conscious followers of bands such as The Jam and The Who. The transformation into an icon of the Mod-culture came from pairing the tennis shirt with their slim-fitting suits, buttoning it to the top as an almost middle-finger statement. The brand’s branch on Carnaby Street in the capital became a mini-cathedral. 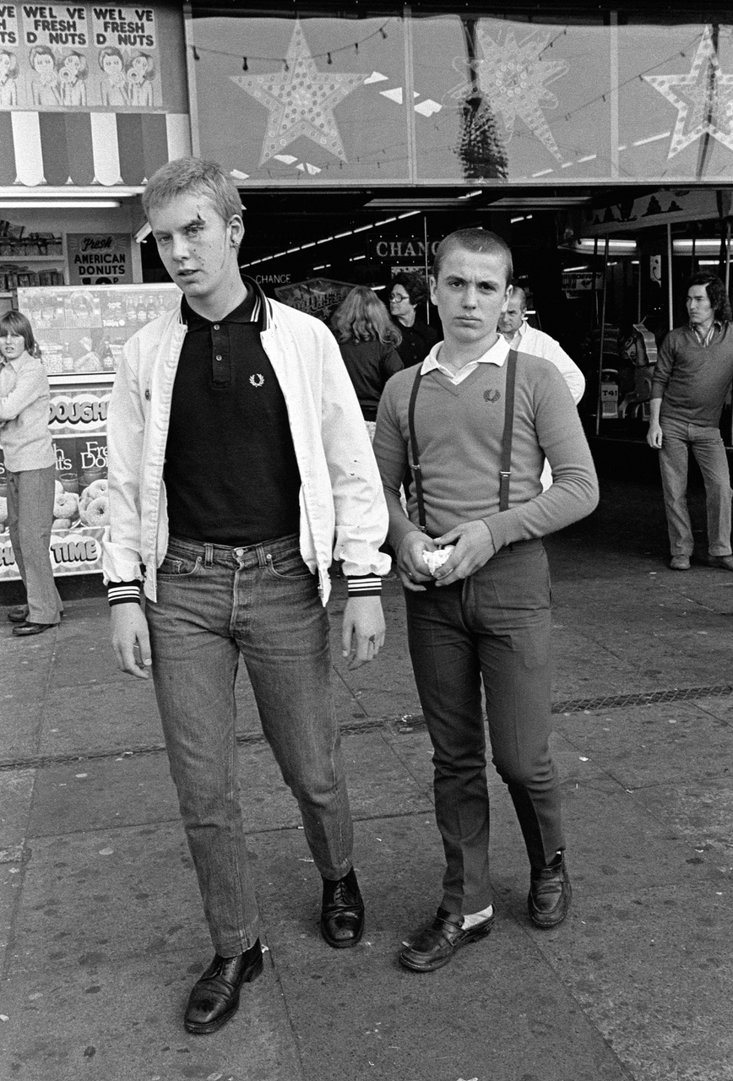 When Sean Connery wore a navy M3 as James Bond in 1965’s ‘Thunderball’, the most successful film in the series for half a century, Fred Perry’s place as a cultural phenomenon was confirmed. The quintessential British hero was now sporting the quintessential British brand. After almost 60 years of the spy franchise, it still remains one of the few visibly branded articles of clothing Bond has ever worn. It had truly transformed from a line designed specifically for tennis players, to a lifestyle brand that represented contemporary fashion and heritage.

‘Fred Perry’ had become an outcast accepted by both the mainstream and the rebels to assert a strong sense of identity, an identity that remains to this day, seven years since Andy Murray broke the Wimbledon duck, 25 years since the great man’s passing, and eighty years of the fashion brand itself, something that screams ‘Best of British’ without the need for the utilisation of Union flags.