This weekend the gaze of the sporting world will turn to Saudi Arabia as Anthony Joshua looks to win back the IBF, WBA, WBO and IBO titles he lost in June against the man who took them off him, Andy Ruiz Jr.

While the choice to host the bout in the Middle East raised eyebrows, it’s not the first time a fight has been hosted in a somewhat bizarre location. In fact, just six months ago Amir Khan headlined an event in Saudi Arabia himself, while Callum Smith and George Groves slugged it out a year prior in the World Boxing Super Series at the very same venue.

Speaking to The Sportsman this week, promoter Eddie Hearn said there is nothing new in the Ruiz Jr. v AJ rematch causing a stir since the same had happened for Muhammad Ali's battles in the Philippines and Zaire.

“Both fights were held in controversial options at the time,” Hearn told us, reflecting on the criticism of holding perhaps the fight of 2019 in a country whose human rights violations have been well documented. “This is very similar.”

“The difference is there’s a plan in Saudi Arabia to develop the sport and at a grassroots level as well. I’m not saying the country’s perfect. What I’m hearing [from] everybody that’s coming is that they're having a nice experience. That’s what they keep telling me.

“We couldn’t have been treated better. [Saudi Arabia] couldn’t have done more to make it the success that it will be. They’re throwing everything at this. I can’t wait.”

So as Saudi Arabia gets set to become the centre of the boxing world for one weekend at least, here are more examples of big-fight venues that defied the norm:

Located in what is now known as the Democratic Republic of Congo, ‘The Rumble In The Jungle’ is regarded as one of the most important fights not just in Muhammad Ali’s career, but in the history of boxing as a whole.

The concept of pitting these two brilliant heavyweights against each other in Africa was concocted by non-other than notorious promoter Don King. The most famous haircut in boxing managed to get both combatants to sign a contract saying they would fight for him if he could secure a $5million purse, an enormous prize-fund at the time.

Unwelcome to host the fight in America, and with no money, King was forced to seek an alternative country to stage and support the fight.

This led to Fred Wyman, American advisor to Zaire’s dictator Mobuto Sese Seko, attempting to persuade the leader that such a high-profile event would place an immense spotlight on the nation. Libyan dictator Muammar Gaddafi even came in as a primary financial sponsor of the event.

The truth is, you could fill this list with Ali fights; he fought Joe Frazier in the Philippines, Trevor Berbick in the Bahamas, Joe Bugner in Kuala Lumpur and Rudi Lubbers in Indonesia.

Boxing and bunnies have more in common than you’d initially think, with multiple fighters having fought in the hallowed grounds of the Playboy Mansion.

In 2003 a young David Haye, in only his fifth career fight, fought journeyman Vance Winn at cruiserweight on the undercard of Jeff Lacy’s fight with Richard Grant.

Haye isn’t the only big name to have scrapped it out in Hugh Hefner’s gaff with former light heavyweight king Sergey Kovalev fighting there three times at the beginning of his career in 2009, 2010 and 2011.

A year after his second defeat to Steve Collins and a brief spell of ‘retirement’, Chris Eubank made the 3,485-mile journey to Cairo’s Heliopolis Sports Centre to fight Argentina’s Luis Dionisio Barrera in a fight painfully punned as the 'Style by the Nile'.

Against an opponent who had lost his last four fights and was a much smaller man than Eubank, the fight was unsurprisingly seen as little more than an exhibition match, and Eubank had trouble selling the fight to UK broadcasters, who had little interest in the bout.

Eubank would stop his opponent inside five rounds before jet-setting to Dubai for his next fight five months later.

When you scour boxing records from the early part of the 20th century you’re bound to come across a few quirks, especially when looking at the larger-than-life Jack Johnson, boxing’s first black heavyweight champion.

In a career that spanned 34 years, the ‘Galveston Giant’ began his career in the States before fighting in England, Australia, Argentina, France, Mexico and Cuba.

His world title fight with eventual conqueror Jess Willard took place in the Cuban capital of Havana on a scorching April afternoon and was scheduled for a whopping 45 rounds at the newly constructed Oriental Park Racetrack.

Willard knocked out the champion in the 26th round but Johnson later claimed he lost on purpose despite recorded footage of him telling his cornerman between rounds that he’d bet $2,500 on himself to win. 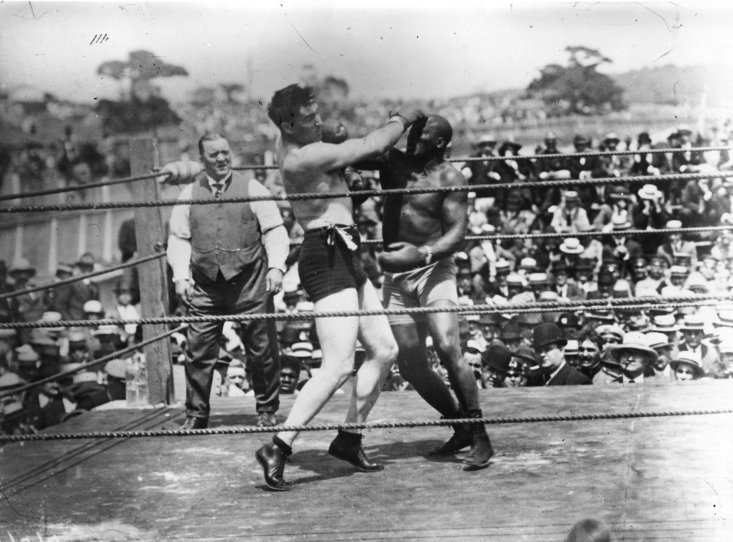 The third fight in Ali's blockbuster trilogy with arch-rival Smokin' Joe Frazier is not only the best of the trio but also one of, if not the, greatest exhibition of boxing in the sport's long and storied history.

Having fought the first two fights at New York's Madison Square Garden, the final 'rubber' match between the two moved 8,500 miles across the international date line to the Filipino capital.

The decision to host the fight in such a far-flung location meant that the fight took place at 10am local time, in order to accommodate the rest of the world on that October morning.

While it had little effect on the fans' viewing habits, the time swap was hugely detrimental to the fighters. Ali's ring physician, Ferdie Pacheco, said: "At 10am the stickiness of the night was still there, but cooked by the sun. So what you got is boiling water for atmosphere."

The struggle the fighters had to put themselves through was evident to all who saw. The two icons of the sport battered each bloody for 15 rounds in of the most brutal and exhausting spectacles pugilism had ever seen.

After the fight, Ali claimed: "It was like death, the closest thing to dying that I know of."