Sports
Features
The Brazilian is one of the most exciting personalities on the waves
Jack Porter
16:05, 14 May 2020

On grass they have Pelé, on asphalt Senna, and on water, the great nation of Brazil can count Gabriel Medina.

Medina, the 26-year-old South American surfin’ superstar with a brace of historic world titles, manoeuvres to match, and classic Baywatch looks. A cross between Duke Kahanamoku and Oberyn Martell, Medina also has ruthless competitiveness, and has ultimately become a source of cause célèbre that marks him as one of the most exciting and attractive personalities on the waves.

On May 14, 2016, he provided the moment when his status truly burgeoned, Medina wrote himself into surfing lore by becoming the first person in the history of the sport to produce a perfect backflip in professional competition. The came at the Oi Rio Pro, an event on the World Surf League tour. Off the beach of Barra da Tiju, the then 22-year-old launched himself stratospherically, taking his board ‘round the world, a courageous Catherine wheel off the coast. The superlative-defying, rainbow fish emulating spectacle earned him perfect 10s across the board. 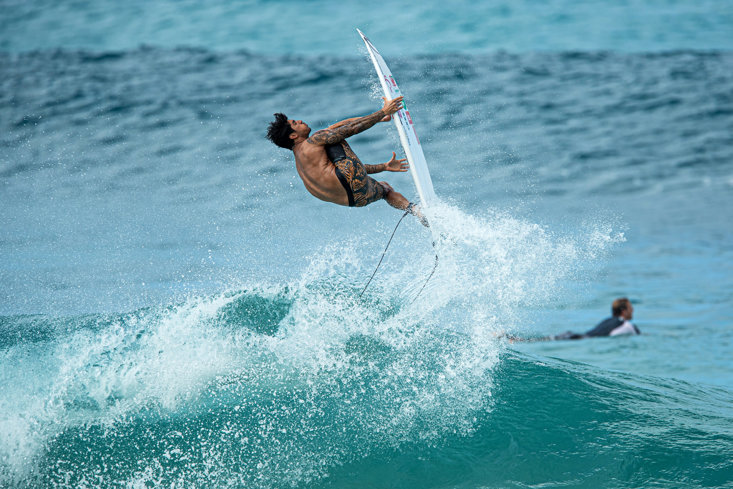 Born, raised and remaining in Maresias, the beach facing out towards the Atlantic Ocean, in the city of São Sebastião, on São Paulo state's northern coastline. He has almost single-handedly been responsible for the elevation of the sport in São Paulo. Under the influence and tutelage of his father Charles Saldanha, Medina started surfing aged nine on his hometown beach, his playground and training ground. A first title followed two years later, at the age of 11, in the under-12 category on Rip Curl Grom Search in Búzios, Rio de Janeiro.

Performances at the Brazilian National Amateur and Paulista (the main championship in the state of São Paulo). He gained further attention outside of Brazil with a second-place finish in the Under-14 Volcom, in California, then in the Under-16 Amateur World Championship, in Ecuador. In July 2009, aged 15, he signed a contract with Rip Curl and began his career as a professional, immediately taking off by becoming the youngest ever surfer to win a men’s qualifying event in the World Surf League (WSL).

In 2014 he became the first world surfing champion from Brazil.

“As a result, surfing gained huge visibility in my country, creating national interest,” he explained upon receiving his second award, in 2018, the year Brazil took nine event wins out of the 11 events on the Championship Tour calendar, with Medina contributing three. “Immediately we saw so many kids, adults, and even the elderly inspired and interested to learn more about surfing.

“I felt so happy to see all that happening, especially when I saw all those kids, who helped me to gain my dream, which is the Gabriel Medina Institute.”

The institution offers free tuition and training to selected athletes in the Circuito Medina programme, as well as providing language skills and computer courses.

“Surfing is such a powerful platform to help society and keep kids away from bad things.”

There was also a coastal clash of the titans at the 2014 Billabong Pro Tahiti, in which Medina, the World Number One, then aged 20, took on arguably the World’s Greatest Ever Number One, Kelly Slater (ranked sixth at the time and 42 years old).

“I’m looking forward to put on a great show,” Medina started ahead of the match-up.

In an exceptional contest, Medina edged Kelly, starting off strongly to etch a perpetual smile across his face as he produced consistent technique through opening barrels. Slater eventually asserted the pressure on the young upstart, with a beautifully controlled ride even through to a classy exit, moments after taking his first wipeout of the entire event. However, recovering, riding through the mineshafts with exceptional ease, Medina didn’t relent, taking perfect Chopes with an 18.96 combined total.

"I don't really know what to say," said Gabs. "Kelly is a legend of surfing. When I fell off, I thought I had lost that heat. But I thank God. This is the best feeling ever. The waves were perfect and big. This feeling is amazing. I don't know how to describe it. I love surfing, I love what I'm doing right now.

Since 2015, Medina has earned more Championship Tour victories than any other competitor, and the two-time World Champion who was set to illuminate the inaugural event in his discipline at the 2020 Olympic Games.

It would also have been an opportunity for him to regain a vitiated reputation, after courting controversy at the Billabong Pipe Masters in Hawaii, having dropped in on fellow Brazilian Caio Ibelli’s wave to ensure his opponent wouldn’t outscore him on the final run of the round, a decision that, although was considered clever and tactically astute, gained widespread consternation as devious and unsportsmanlike.

“I knew if I had an interference I was going to count my big wave,” Medina said in the aftermath.

He eventually finished behind countryman Italo Ferreira, the man he will partner with at the Olympics, in the final.

Medina counts among his friends the most expensive footballer in history, his compatriot Neymar Jr.

“Gabriel is like a brother to me,” said the Paris Saint-Germain forward, in attendance to witness Medina at a 2018 competition in Peniche, the Oeste region of Portugal. And much like the €200million man, Gabriel Medina is quickly becoming not only a divisive but undeniably magnetic feature of his sport, but a national icon, producing samba on the surf.