Isn’t golf meant to be a leisurely daytime pursuit? Not for Tyrrell Hatton this weekend, it wasn’t.

The Brit’s win at the Turkish Airlines Open was completed under the floodlights for the first time in European Tour history. The late finish came thanks to six players having finished level on 20-under-par after the 72-hole contest.

Hatton eventually got the better of Matthias Schwab, Kurt Kitayama, Benjamin Herbert, Victor Perez and Erik Van Rooyen to bag the €2million first-place prize, but he’s far from the first sports star to have taken the long route to victory...

This weekend’s FA Cup ties had a salmagundi of first-round fixtures to keep across, but the one which outlasted the rest came between Accrington Stanley and Crewe Alexandra. The Wham Stadium seemingly turned into the Globe Theatre, as what took place was a comedy of errors.

After an injury to the referee was followed by his replacement also being injured, there had to be a toss of coin to decide which wing the one remaining referee’s assistant would patrol, since his colleague had been forced to act as third-choice ref. With all the delays for the officials’ injury-time, it only made matters worse that there was a penalty and a red card throw in too. In total, the match took more than three hours to complete from start to finish. Thankfully, it didn’t go to extra-time or a replay, with Crewe winning 2-0 on the day.

Across three days between June 22nd and 24th 2010, John Isner and Nicholas Mahut played out the longest tennis match in history at the Wimbledon Championships, running an eye-wateringly stunning 11 hours and five hours.

The fifth set alone lasted more than eight hours and was eventually won 70-68 by Isner, with organisers allowing him a night’s rest before sending him back out for his second-round match the following day! There’s now even a plaque at the All-England venue commemorating the match, with the longevity never likely to be match since a new fifth-set tiebreaker rule was introduced in 2018.

The third game of the 2018 World Series between the Boston Red Sox and the Los Angeles Dodgers was a proper test of endurance. The game ran for seven hours, 20 minutes, making it the longest postseason game in Major League Baseball history. It finished at 12:30am in Los Angeles, meaning Red Sox fans back home in Boston were left watching until 3:30am Eastern time to see their side beaten by a Max Muncy home run in the 18th inning. There was no rest for the wicked, as the two teams played each other in Game 4 the following night, with the Red Sox prevailing that time on their way to a 4-1 series victory.

Red Sox
@RedSox
Thank you to the @Dodgers for an incredible #WorldSeries and congrats on an amazing season! 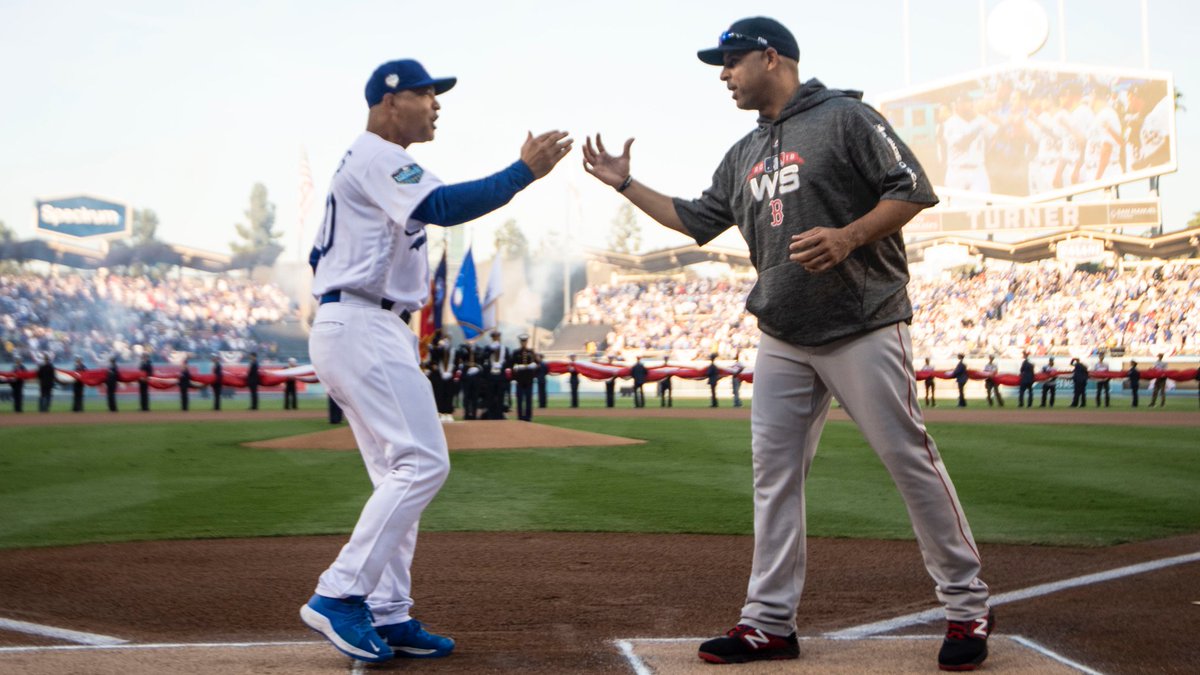 In the era of timeless tests, the longest test match in cricket history saw a gargantuan clash between South Africa and England in Durban. It started on Friday March 3rd 1939 and wouldn’t conclude until Tuesday March 14th. Since there was no conclusion to the match by the end of the ninth day there ought to have been a 10th day of play, but England needing to begin their boat ride home and so the match was declared a draw.

Imagine that, after 43 hours and 16 minutes of play, 1981 runs and 5447 balls, it still ended as a draw! Such are the eccentricities of cricket!

ICC
@ICC
#OnThisDay in 1939, the longest Test match ever, 9 days of play over a 12 day span, began in Durban between South Africa and England. 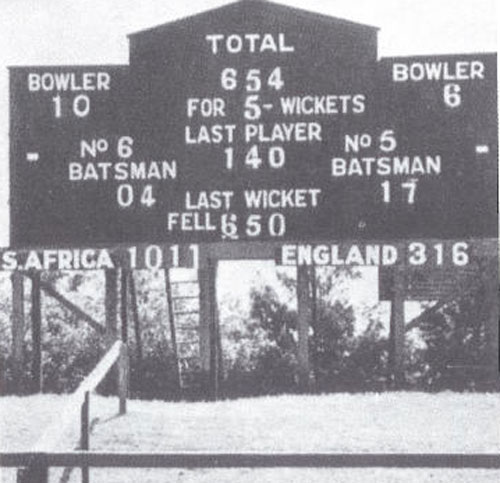 If you thought Tyrrell Hatton had it bad - though the £1.56m pay-out might be of some comfort - spare a thought for Billy Burke and George von Elm all the way back at the 1931 US Open. With the two golfers tied after their four rounds of golf, they were sent out for a fifth day of play to negotiate 36 more holes in a bid to decide a winner. The result? Another tie!

And so it was that on the sixth day, another 36-hole play-off finally separated the two players, with Burke winning by a single stroke, with a combined 589 shots to 590 over the entire 144-hole competition.

Burke reportedly smoked a total of 32 cigars over the eight-round, six-day duration at the Inverness Club.

Was anyone exhausted watching KSI v Logan Paul? Well on April 6th 1893, Andy Bowen and Jack Burke were involved in the longest fight in boxing history, going at it for a remarkable seven hours and 19 minutes for a light heavyweight title in New Orleans. The fight at the Olympic Club lasted a phenomenal 110 three-minute rounds.

Referee John Duffy eventually had to declare a "no contest". That’s right, after all that, it was just a draw. Both pugilists had finally gassed themselves out and Burke had even broken all the bones in both of his wrists.

Bowen fought four more times, including just a month later in a relatively impressive four-hour, 85-round fight against Jack Everhardt, which Bowen won with one hand. 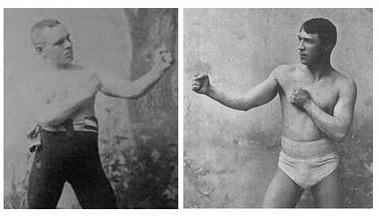 12
5
x
Suggested Searches:
Tyson Fury
Manchester United
Marcus Rashford
Lewis Hamilton
F1
Air Jordan
More
football
'Big Fish' James Rodriguez Is Exactly Where He Needs To Be At...
James Rodriguez’s career so far has been a great big ‘what if’. Whereas some footballers [ ... ]
sports
''Hold My Beer'' - How Surfer Mikey Wright Leapt Into Action...
“Hold my beer” bellowed Mikey Wright as he tore off his shirt and charged towards the sea. [ ... ]
us-sports
The Headbutts, Fall-Outs And Four-Day Benders That Made Dennis...
They called him The Worm. It may now be over two decades since he last played at the highest level in [ ... ]
boxing
The Skipping, Sushi And 6am Starts Behind Canelo Alvarez's Billionaire...
Saul ‘Canelo’ Alvarez is not only one of the richest sportspeople on the planet, having [ ... ]
sports
Team GB Star Lutalo Muhammad's Guide To Sleeping Like An Olympian
Practice makes perfect, and Olympic athletes spend years honing their craft in pursuit of medal glory. [ ... ]
football
How Cheung Chi Doy Flew Solo To Become Hong Kong's Only European...
Sixty years ago, on 14 January 1961, two teams walked out at Bloomfield Road for a Saturday football [ ... ]
sports
The Top Motivation Tips To Keep Your 2021 Fitness Kick On Course
We are now getting stuck right into January and the new year, and with the first proper weekend behind [ ... ]
football
Remembering Josef Bican, The Only Footballer Cristiano Ronaldo...
It is the perennial argument.. Who is the greatest ever, is it Cristiano Ronaldo or Josef Bican? Ok, [ ... ]
motorsport
Lando Norris' Stunning McLaren 570S, £1.4m Track Test Cars And...
What were you doing at the age of 21? Finishing university, taking the first steps on your career ladder, [ ... ]
darts
Gerwyn Price Would've Quit Darts For A Wales Rugby Union Cap,...
Gerwyn Price dreamed of representing the Wales national rugby team. Life, though, works in mysterious [ ... ]
football
20 Years On, Is Eriksson's England Remembered For The Successes...
It was a time of relative success and front-page scandals. The FA’s decision to appoint England’s [ ... ]
football
Beckham's MLS Move Gets More Monumental Every Year, And Messi...
“I would like to play in the United States someday, it’s always been one of my dreams... [ ... ]
football
Cheers Bud, Messi Pays Respect To The World’s Best ‘Keepers...
Budweiser continues to celebrate Lionel Messi’s record-breaking 644th goal by sending every goalkeeper [ ... ]
football
No More Begging Bowls, Teams Like Marine Should Get 100% Of...
There was an inevitability about the 5-0 away win on the pitch, but Sunday’s third-round clash [ ... ]
sports
The Good, The Bad And The Downright Ugly, What Happens When...
Cardiff City Football Club is one of the most traditional organisations of a deeply traditional sport. [ ... ]
sports
Meet Milly Pickles, The Inspiring Para-Athlete With Five Million...
With five million likes and 204,000 followers on TikTok, and a brand deal with one of the UK’s [ ... ]
boxing
The Hard Work, Long Days And Big Meals Behind Tyson Fury's Incredible...
Tyson Fury has found solace in working out, discovering it is the thing that not only keeps him in shape [ ... ]
us-sports
How Kareem Abdul-Jabbar Brought The Lakers' Incredible 33-Game...
He towered at seven feet two inches tall. The sky-hook was in full flow. Once again the Los Angeles [ ... ]
motorsport
Biker Sam Sunderland Won't Let Covid-19 Kill His Dream Of Another...
It was back in 2017 when Sam Sunderland wrote his name into the record books, becoming the first Brit [ ... ]
football
James Rodriguez's Car Haul Includes £300k Worth Of Mercs, And...
James Rodriguez is an absolute Rolls Royce of a footballer and had Everton’s midfield purring [ ... ]
football
Heroes V Minnows, Legends V The Lowly, The FA Cup Third Round...
The magic of the FA Cup has been slowly dying, they say. There are the scattered fixtures and irritating [ ... ]
sports
The Diet Plans To Suit All Shapes And Sizes, From 5/2 To Fasting...
The New Year’s festivities have been and gone, and Christmas is a distant memory, at least until [ ... ]
motorsport
The Major Milestones Behind Lewis Hamilton's Relentless March...
Lewis Hamilton. His name is Lewis Hamilton. And there’s a million things he’s done. But [ ... ]
us-sports
11 NBA Titles And A 70% Win Rate, Phil Jackson Is The Best Coach...
There is simply no other who can touch him. He taught Jordan, Kobe, Shaq, Fisher, Pippen, Rodman. He [ ... ]
football
Big-Game Belief Proves City Are The Real Deal And United Are...
Manchester City are going to Wembley again. Manchester United are fielding questions about their readiness [ ... ]
boxing
Anthony Joshua Is The Selfless Sports Star We All Need In Our...
We need sport more than ever right now. We need it to distract, to entertain, to lift our mood and help [ ... ]
football
Thirst, Dedication, Craft, Bravery, Words That Define The Genius...
Even Gianluigi Buffon and Jan Oblak couldn’t stop Lionel Messi, but they got a little something [ ... ]
football
Long Live Le King! Why Bruno Fernandes Is Manchester United's...
Manchester United are flying. Ole Gunnar Solskjaer’s men have transformed themselves from mid-table [ ... ]
boxing
Canelo Alvarez, The Superstar Who Makes Golf Shirts And A Panda...
What would you spend your money on if you were one of the richest sportspeople on the planet? Saul 'Canelo' [ ... ]
boxing
Heroin, The Mob And A Left Jab From Hell: The Tragic Tale Of...
“One day they’re going to write a blues song about fighters. It'll just be for slow [ ... ]