America in the 1930s was about fighting the gloom of the Great Depression.  The 102 storey Empire State Building went up, a shining beacon of the American dream. Movies went from silence to sound, and icons such as Marlene Dietrich, Carole Lombard and Greta Garbo were suddenly heard and instantly loved. And in sport, the two epochal female figures were tennis players, Helen Wills Moody and Helen Jacobs.

The two Californians’ Hellenistic on-court battles both in Europe and across the Atlantic commanded attention, and Wills Moody retired with 19 Grand Slam titles, today still the fourth-highest of all-time on the women’s charts, marginally ahead of both Chris Evert and Martina Navratilova. But Ms Jacobs had a far more interesting tale to tell, far away from tennis.

On the court she generally lost to Moody, including six major singles finals, four Wimbledons, one U.S. National, and one French International, but that didn’t dampen the atmosphere of the dramatic encounters. For two decades the pair would provide some of the most electric battles in the sport, setting the tone for rivalries to come. 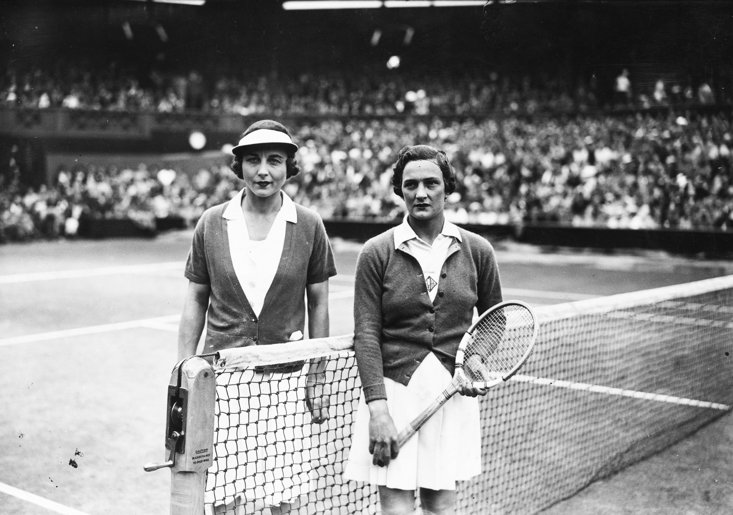 It was in Forest Hills, New York, where Jacobs achieved the most success. She won the US Championships consecutively from 1932 to 1935 and in her four victories, dropped only one set, to - guess who? - Wills Moody. Jacobs was also a three time U.S. National Women’s Doubles Champion and appeared in six singles finals at Wimbledon between 1929 and 1938.

And as a character, Jacobs was a champion. Where Wills Moody was phlegmatic and professional, Jacobs was extroverted and affable. Jacobs also courted controversy when, in the ‘33 U.S final, she retained the title - her third of four straight - wearing shorts without stockings in her sporting attire, and would do so again in front of Wimbledon the following year. 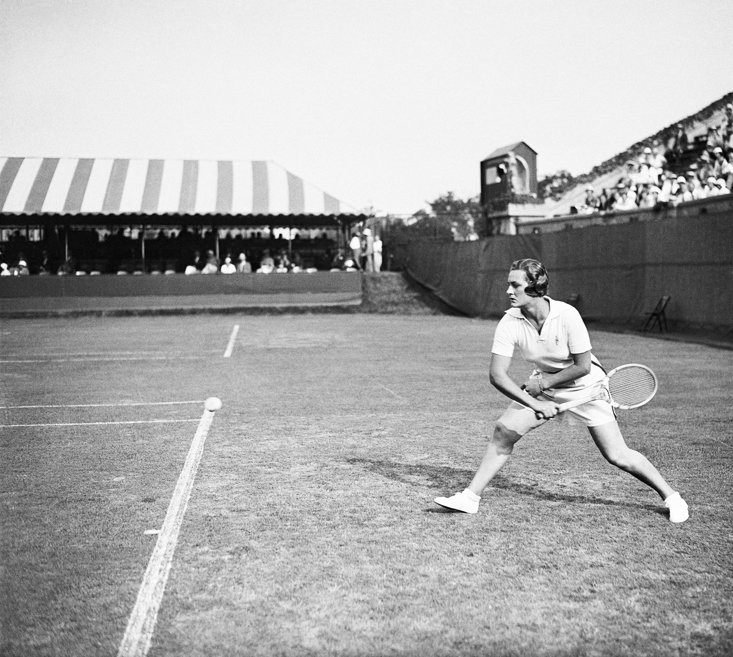 But even more tendentious: this tennis star was a gay tennis star. Jacobs was an out, loud and proud lesbian, dating the publishing heiress Henrietta Bingham for ten years. At the time of her death, in 1997 aged 88, she had been running a farm on Long Island for almost 30 years with her life partner, a woman named Virginia Gurnee.

Though she would have to constantly cede the limelight to Wills Moody throughout her playing days, Jacobs would also have another far more important part to play away from the court, and this time as a pioneer not for her sexuality, but her religion, when it was most under threat. Born into a Jewish household in Arizona Jacobs would be involved in the fight for freedom when the United States’ entered the Second World War. Jacobs took courses at the College of William & Mary in preparation for training as a U.S. Navy WAVE and subsequently became a commander in the U.S Navy intelligence, one of just five women in the Navy to achieve that rank. 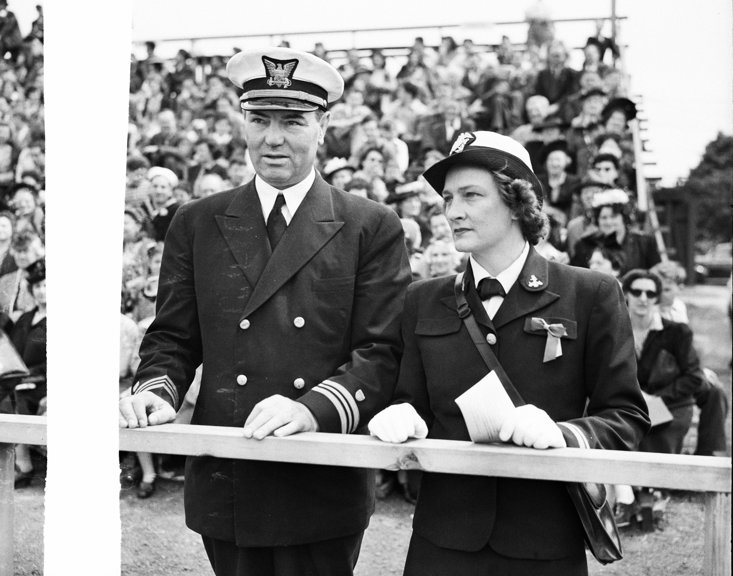 She was also the first female tennis player to be named the Associated Press Female Athlete of the Year in 1933, and in September 1936 she appeared on the cover cover of Time Magazine (she same year she achieved the world number one ranking in her sport)  wearing a black shirt with white trim around the collar and man-tailored shorts, revolutionising new attire for women’s players that she popularised. She continued her fashion forays after the career had concluded, designing sportswear. 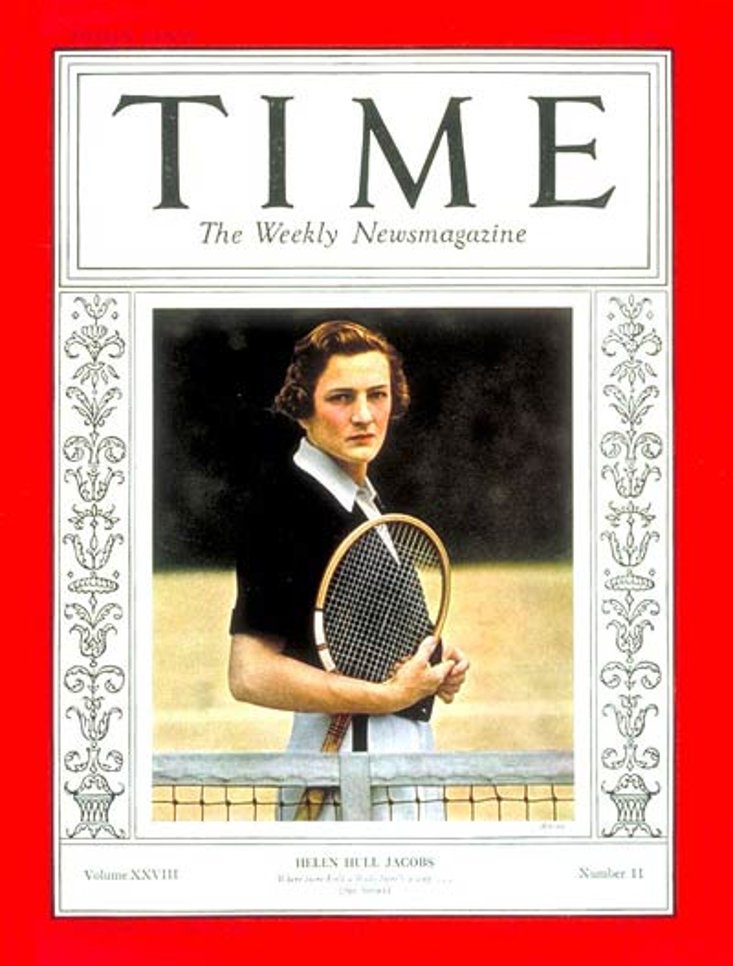 Helen Jacobs, the Gay Jewish Tennis Star Navy Commander was inducted into the International Tennis Hall of Fame in 1962.

Over half a century later, she was rightly afforded a place in the National Gay and Lesbian Sports equivalent.

x
Suggested Searches:
Manchester United
Liverpool
Manchester City
Marcus Rashford
Premier League
More
football
Russell Martin Is Destined For The Premier League - With Or...
35-year-old Russell Martin has been appointed Swansea City’s new boss after the exit of Steve [ ... ]
sports
Biles, Peaty, Stokes and Mings: Mental Health In Sport Reaches...
Mental health in the sporting world looks to have hit a turning point. The Olympics, watched by over [ ... ]
boxing
Teofilo Stevenson: The Man Who Turned Down Muhammad Ali To Stay...
Former featherweight world champion Barry McGuigan once said that "Cuban boxers are genetically [ ... ]
sports
How John Major And The National Lottery Inspired Team GB's Gold...
25 years ago Team GB was a mess. At Atlanta 1996, Matthew Pinsent and Steve Redgrave won Britain’s [ ... ]
cricket
Ryan Sidebottom: I'm Bouyed By Early Success Of The Hundred
I’m in. This competition had its sceptics, but having watched the action unfold for the past week, [ ... ]
football
With Solskjaer And Sancho, Manchester United Are Title Contenders...
It has been a long eight years for Manchester United fans since Sir Alex Ferguson departed, but finally, [ ... ]
football
Future England Manager Wiegman Shows What To Expect From Her...
Sarina Wiegman will have been whetting the appetite of England fans as her Netherlands side have scored [ ... ]
boxing
Outside the Ropes: Jamie Quinn, The Journeyman Fighter Winning...
In former times, a journeyman was a worker who had finished learning a trade [ ... ]
rugby
Where Does The British And Irish Lions Tour Rank Amongst The...
The British and Irish Lions play the first of their three test matches against South Africa today, with [ ... ]
football
On This Day: Luis Figo Joins Real Madrid In The Most Controversial...
In the midst of the summer transfer window 2021, we rewind the clock 21 years, look back at the [ ... ]
sports
Olympic Opening Ceremony At Tokyo 2020 Was A Reflection Of Japan's...
The Japanese opening ceremony was not what we've come to expect from opening ceremonies. The eerily [ ... ]
sports
Who Are Team GB's Flag-Bearers For The Olympics Opening Ceremony?...
The Olympic Games are going to look a little different this year, and Team GB are starting as they mean [ ... ]
sports
Muhammad Ali, James Bond And A Jetpack: The Best Ever Olympic...
Across all sport, few events, if any, inspires unity and collectivism in the same way the [ ... ]
boxing
Last Round, Folks: When Boxing’s Invisible Champion Was Blitzed...
History has not been kind to Floyd Patterson. Countless world champions have drifted through the annals [ ... ]
cycling
The Music Man And The Machine: When Wiggins And Froome Went...
Brits, find a better sporting highlight reel than that of 2012. We dare you.  Simply put, it was [ ... ]
golf
McIlroy’s Open Victory: When Neither Garcia, Fowler Nor Fowl...
“The Open is the one that we all want, the one that we all strive for and to be able to hold his [ ... ]
motorsport
F1's Grey Area Exposed Once Again As Hamilton & Mercedes Take...
As Lewis Hamilton paraded around Silverstone waving the British flag, after winning his home Grand Prix [ ... ]
sports
Make War, Not Love - The Times The Sport Stars Lost It
The case was announced on July 9, 1975: The State of Minnesota vs. David S. Forbes. It became the first [ ... ]
rugby-league
Rugby League Eyes ''Best World Cup Ever Seen'' After 2021 Event...
The Rugby League World Cup this week got the go-ahead to take place as planned in 2021, and with less [ ... ]
football
The Best British Player Ever? It's Time To Put Some Respect...
Happy birthday to Gareth Bale. At 32, the Welshman can boast a career that others can only dream of. [ ... ]
golf
Bryson DeChambeau's ''8-Year-Old'' Tantrum Has Nothing On Di...
Sports people are role models, so goes the consensus, but things don’t always play out that way [ ... ]
football
An Inside Look At England's Euro 2020 Campaign From The Kitmen...
England has a squad packed full of young stars. This summer, led by national treasure Gareth Southgate, [ ... ]
motorsport
The Birth Of Silverstone Thanks To A Race Between A Prince,...
April 14, 2019, China, and the third race of the season at the Shanghai International Circuit. Lewis [ ... ]
boxing
Pandemonium In Atlanta: The Last Great 15 Round Title Fight
The 1980s was a transitional period for the world of boxing. The fledgling cruiserweight division, inaugurated [ ... ]
football
From Jules Rimet To The FA Cup, The Sporting Trophies That Went...
When the World Cup trophy was stolen in London on 20 March 1966, it threatened to plunge the most famous [ ... ]
football
Stuart Pearce Lauds Pivotal England Star Raheem Sterling Ahead...
Ahead of Euro 2020, not many people had Raheem Sterling starting for England. The Manchester City man [ ... ]
football
Mancini v Southgate - The Tactical Battles Which Could Decide...
Could England become European champions on Sunday night? They have shown so far in Euro 2020 that they [ ... ]
tennis
The Day A Flawless Fred Perry Stormed Wimbledon To Win A £25...
“Packed Centre Court sees strenuous struggles for Championships!’ screamed the Pathé [ ... ]
boxing
From Knocking Out A Horse To Missing Gold Medals: Five Of Boxing's...
Boxing has had its fair share of folklore since the introduction of the Queensberry Rules, the generally [ ... ]
us-sports
The Luckiest Man On Earth: When Lou Gehrig Bid A Fond Farewell...
In the Friends episode, The One Where Old Yeller Dies, the character Phoebe Buffay (Lisa Kudrow) watches [ ... ]