Football
Features
The front three is now used by most teams in the Premier League
Simon Lillicrap
11:50, 24 Aug 2019

This weekend will we see two of the Premier League’s most fearsome front threes take each other on at Anfield, as Liverpool host Arsenal. Two wide men and one sole striker is now the norm for most Premier League teams and these two sides boast two of the strongest forward lines in the country.

Liverpool’s famous trio of Sadio Mane, Roberto Firmino and Mo Salah won the Champions League last term and terrified defences across England - but the new-look Arsenal front three has the potential to be just as potent. Pierre Emerick-Aubameyang has shown his class in front of goal, Alexandre Lacazette is a natural finisher and Nicolas Pepe was a fearsome goalscorer in Ligue 1 last term.

But where did the idea of playing three up front come from and why is it now so prominent in the English game?

Perhaps the innovators of the 4-3-3 system, at the very least, the ones who popularised the formation, were the Netherlands side of 1974. Uruguay had played a similar system 20 years earlier, but their three forwards were centre-forwards rather than operating out wide.

A lot was made of the ‘Total Football’ that the Dutch played and the fluidity that their system had when in possession but this is often overstated. The World Cup runners-up boasted a remarkable front three, with Johnny Rep and Rob Rensenbrink on either wing supporting Johan Cruyff, who was an all-purpose number nine. They were the most attractive team to watch in that tournament but ultimately came up short, yet the world had learned from this intricate system.

Fast forward to the Premier League era and despite the 4-3-3 system being popularised across Europe, Manchester United’s success with the 4-4-2 under Sir Alex Ferguson meant that English teams were accused of being tactically naive until the arrival of ‘The Special One’. 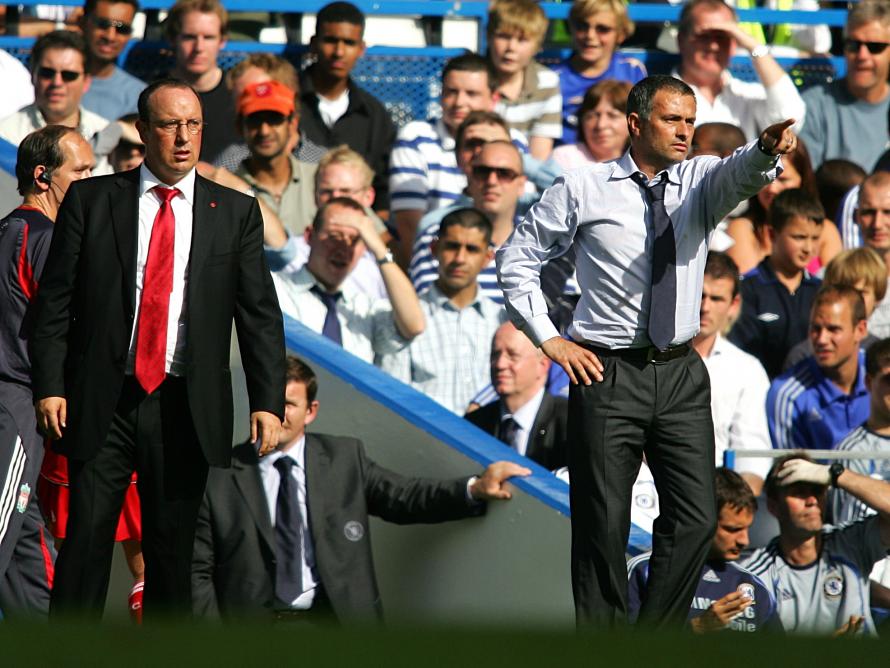 Jose Mourinho came to Chelsea and implemented his 4-3-3 system that helped make English football into the game we recognise today. With United and Arsenal, the two dominant sides at the time, successful with variations of the 4-4-2, Mourinho knew he could get the better of them. He explained at the time:

“Look, if I have a triangle in midfield – Claude Makelele behind and two others just in front – I will always have an advantage against a pure 4-4-2 where the central midfielders are side by side. That’s because I will always have an extra man. It starts with Makelele, who is between the lines. If nobody comes to him he can see the whole pitch and has time. If he gets closed down it means one of the two other central midfielders is open. If they are closed down and the other team’s wingers come inside to help, it means there is space now for us on the flank, either for our own wingers or for our full-backs. There is nothing a pure 4-4-2 can do to stop things’.

He was right. Chelsea won the league twice on the bounce and only lost one game in the 2004-05 season on their way to Mourinho’s first league success in England.

By 2006, Alex Ferguson was sick of losing to the Portuguese gaffer. He brought in Michael Carrick from Spurs in a move that strengthened his midfield and was able to play Cristiano Ronaldo, Wayne Rooney and Ryan Giggs together as a strong front three and by doing so, he won back the Premier League title.

The following season, Carlos Tevez arrived and Giggs was pushed into a central role as he lost his pace. Those three caused havoc and Ronaldo was the best player in the world that season as United did the Premier League and Champions League double. However, their hopes for a European double were dashed in 2009 as Pep Guardiola’s side, with Lionel Messi in the false nine of their very own 4-3-3, became the best in the world.

Chelsea fought back to win the title in 2009-10 with Nicolas Anelka, Didier Drogba and Florent Malouda to win the Blues the title, with Drogba ending the season with 29 goals and the Golden Boot. Manchester United and Manchester City then traded titles between them before Fergie’s retirement, which of course ended with a title win as 4-2-3-1 become more commonplace.

Leicester stunned the country with their title win in 2016, as Claudio Ranieri’s aggressive 4-4-2 system lead to an incredible Premier League win whereas Antonio Conte’s title win with Chelsea came with his famous 3-4-3 formation, but still, it required three fluent forwards, led by Eden Hazard to secure that title win. Since then, it has been Pep Guardiola’s 4-3-3 that has dominated English football with his pressing style perfected at Barcelona in operation once again.

Strike partnerships are a thing of the past and Arsenal and Liverpool, as well as most of the other teams in the division now,  like to operate with three forwards in the final third. The investment in this area has been huge for the Gunners, but will it pay off on Saturday afternoon?