Sheikh Hamdan bin Rashid Al Maktoum, one of the most influential owner/breeders of flat racing over the last 40 years, has sadly passed away at the age of 75.

He was the older brother and deputy of Dubai’s ruler, Sheikh Mohammed bin Rashid Al Maktoum, and came to Britain in the late 1960’s to study at Cambridge. It was here, at nearby Newmarket that he fell in love with horse racing and his famous blue and white silks were carried by various superstars all over the globe under the Shadwell banner.

Sheikh Hamdan had lots of success in South Africa and USA as well as in his native Dubai, but it is on these shores and in Ireland where his influence was most clearly felt in the horse racing industry.

He bred champions such as Nashwan, Nayef, Erhaab, Sakhee, Haafhd and Ghanaati amongst many others, helping him to become Champion Flat Owner on eight occasions, most recently last season.

He was also a very successful bloodstock buyer, having purchased champions such as Salsabil and more recently Battaash from the sales.

He used many of the top trainers, such as John Gosden, Sir Michael Stoute and Barry Hills, who handed over the reins to son Charles, and it was he who presided over the career of superstar sprinters Muhaarar and Battassh.

John Burrows, travelling head lad for Charles Hills at Faringdon Place in Lambourn, knew Shiekh Hamdan Al Maktoum from his many stable visits and told me: “He was a very loyal and generous man who always liked his horses. He was very sweet on the Ghanaati stock [his 1000 Guineas winner] and followed them.

"He was patriotic man who always had affectionate for his horses. He always liked to know the goings on and how the family was here at Faringdon Place. There is a picture on our website of Battaash’s first Nunthorpe win with Charles’ children on the winners’ podium with him and they are all smiles. That is the kind of man he was.

“He had horses here with us since the mid-90s, like Haafhd and Ghanaati who were homebred at his Shadwell base and then more recently Champion sprinters Muhaarar and Battaash.“He always used to pay visits around the yard and evaluate his stock, and will be sorely missed in the racing world. He was a very nice man.” 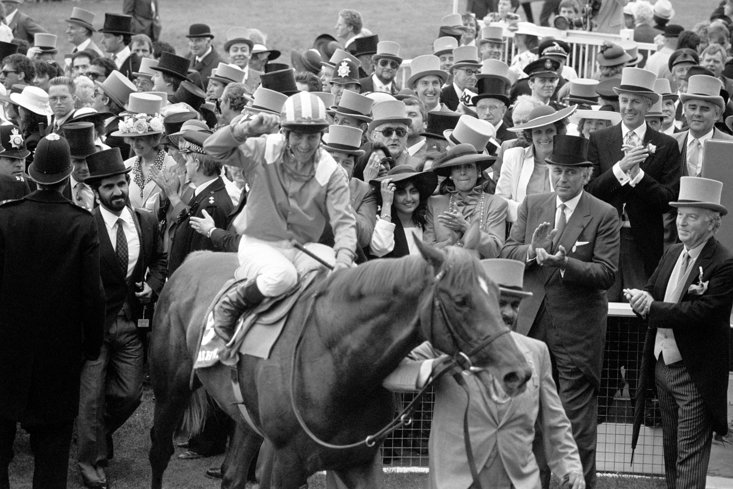 WILLIE CARSON ON NASHWAN AFTER THEIR 1989 DERBY WIN

Classic winning jockey turned ITV and Sky Sports pundit Jason Weaver rode in the famous blue and white silks and recalled the days of watching them when growing up.

He said: “When you think back how many times he has been champion owner and then last year at Royal Ascot it was a Sheikh Hamdan rout of the opposition. He won everything.

“I go back to when I was a kid and starting off, seeing Willie Carson on Nashwan, that was the absolute pinnacle of the sport. Those colours were always at the top level and they were in everything and winning everything.

“He was incredibly loyal with everybody around him. If you showed him loyalty, he showed you. Years ago, when Richard Hills was second jockey to Willie Carson, it was an unwritten rule that the number two never got the top job. But Richard did, and that broke the mould at that time. That was an indication of the man he was.”

Those world-renowned silks are set to be carried by Danyah in the Lincoln at Doncaster and by Khaadem in the Al Quoz Sprint at Meydan on Saturday afternoon, with victory for either, especially Khaadem in Dubai, likely to produce emotional scenes from connections.

His daughter, Ms Hissa Hamdan Al Maktoum, owns another leading Lincoln fancy in Haqeeqy, showing that the great man instilled the love of the thoroughbred into his children. With the Sheikh regularly having 200 horses in training in Britain alone each season, it is hoped that his legacy lives on in the Shadwell operation.