Football
Features
Nwankwo Kanu and Marc Overmars caused a furore against Sheffield United on this day in 1999
Matthew Crist
06:55, 13 Feb 2020

It was a goal that never should have been in a game that never was, at least in the eyes of the record books. But Arsenal’s clash with Sheffield United on 13 February 1999 will always remain part of FA Cup folklore.

In an age when it appears managers will do pretty much anything to avoid a replay, it’s almost inconceivable to think that two teams would voluntarily play each other again when the outcome has already been decided.

But that is exactly what happened when Nwankwo Kanu drew a helpless Alan Kelly and squared the ball for Marc Overmars to score in the 76th minute of the fifth-round tie at Highbury 21 years ago. It ought to have secured the Gunners’ place in the quarter-finals but instead sparked scenes like nothing witnessed before on an English football ground.

Arsene Wenger’s side had won the league and cup double the previous season in his first full campaign as Arsenal manager and entered the match on a run of nine games without defeat as they battled with Manchester United for the Premier League title once more.

Sheffield United, managed by former Manchester United defender Steve Bruce, were sitting comfortably in mid-table in the old First Division and headed to north London with nothing to lose and backed by 5,000 noisy fans.

It appeared to be business as usual when Patrick Vieira headed home Dennis Bergkamp’s free-kick, but United levelled just two minutes after the break when Marcelo glanced a superb header past David Seaman right in front of the travelling Blades fans.

The game then exploded into life as United threatened at one end and new-boy Kanu came on for Arsenal and almost scored with his first touch in English football.

But with 15 minutes to go an incident occurred which turned a relatively nondescript FA Cup encounter into one of the most talked-about and controversial fixtures for years.

When United’s Lee Morris went down in the Arsenal area he appeared to be seriously hurt, leading Blades keeper Alan Kelly to put the ball out in the belief that his side would then be given possession back when play restarted.

But as Ray Parlour threw the ball towards the United goalkeeper, Kanu, seemingly oblivious to this unwritten piece of football sportsmanship, nipped in and gave the ball to Overmars, who almost apologetically put the ball into an empty net.

Referee Peter Jones was besieged with furious Sheffield United players, but with no Arsenal player having broken any rules and nothing in the laws of the game stating that the ball must be returned to the opposition in such circumstances, the goal stood.

Steve Bruce was so furious that he began to beckon his players to the touchline, initially threatening to call a halt to the game. It took the intervention of midfielder Graham Stuart and assistant boss John Deehan for Bruce to allow a resumption after a six-minute delay during which five United players were booked. 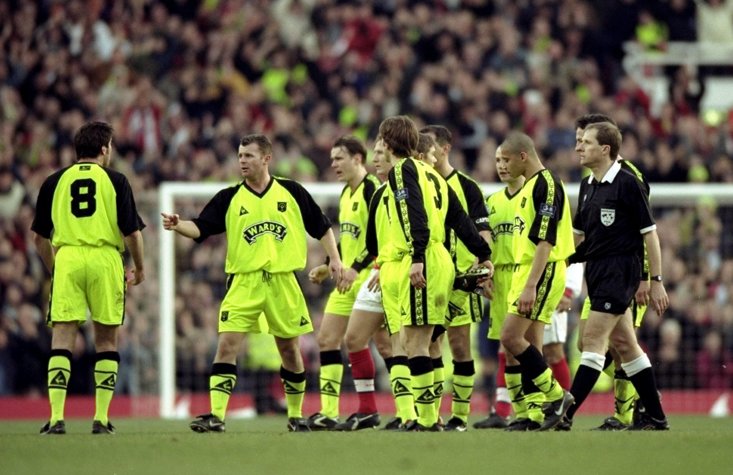 Sheffield United's players prepare to leave the field in protest

“Most of the crowd had switched off while treatment was being given,” Arsenal fan and author of ‘Stuck on You: The Rise & Fall... & Rise of Panini Stickers,’ Greg Lansdowne tells The Sportsman of his memories of that day at Highbury.

“When play re-started there was probably even more confusion in the crowd than on the pitch as, once the goal went in and all hell broke loose, we all needed to work out exactly what had gone on as confusion reigned.”

Arsenal saw out the game with their 2-1 lead intact but even before the final whistle there were moves by the Arsenal hierarchy for the match to be restaged, an offer which was later confirmed by Wenger.

“When we left the ground it was clear that wasn’t going to be the end of it,” recalls Lansdowne, a Gunners follower of almost 50 years. “Remember, we’re talking about 1999 and media uproar then wasn’t what it is now, so when I got home and saw [Arsenal vice-chair] David Dein being interviewed on Sky Sports, I knew something was afoot.”

The match was eventually replayed 10 days later with Wenger claiming, “I offered the replay because it wasn’t right to win that way. It wasn’t the Arsenal way. We want to win all our games but nobody cheated on purpose.”

Bruce was more than grateful for the opportunity to play the game again, revealing after the initial match, “I could not understand what was happening, and if any of my players had done anything like that I would have sorted them out straightaway.

"At the time it was perhaps the most sickening moment of my entire career, certainly of my managerial experience.”

Fittingly, like the first game, the result of the rematch was 2-1 to Arsenal, but minus the controversy as the Gunners progressed to the last eight at the expense of the Blades and their loyal band of fans who had once again travelled to the capital in their numbers.

“If memory serves me right we had to pay again,” explains Greg of the replay for which tickets were half the usual cost. “We’d seen a game in its entirety first time round so this was another 90 minutes. Essentially it was just another game, though the Sheffield United fans who had to trawl back down to London again probably saw it another way!

“In terms of the replayed match, a Dennis Bergkamp chip is really the only thing worth recalling, though with similar ‘inadvertent’ goals seeing the wronged team being allowed to walk the ball into the net in subsequent years, I think it would have made things a lot easier had they agreed to do that in the first game!”

With convention having caught up in the last 21 years, the scenes at Highbury that day will probably never be repeated.

More
boxing
Mayweather, Novocaine And A Bad Night At The Office: Floyd’s...
As far as professional boxing careers go, they rarely finish as immaculately as Floyd Mayweather Jr.’s [ ... ]
football
Cantona And Culture: The Five Greatest Performances Of King...
“As flies to wanton boys are we to the gods, they kill us for their sport. Soon the science will [ ... ]
boxing
''Most Notorious African-American on Earth,'' The Life And Times...
This article first appeared in The Sportsman on 31/03/20 What do Alan Turing, The Doors frontman Jim [ ... ]
motorsport
Barrichello: The Brazilian Bridesmaid Who Refused To Catch Schumacher’s...
When ‘Brazil’ and ‘Formula One’ are mentioned within the same breath, the first [ ... ]
football
Best Kept Secrets: A Man United Legend, Joan Collins And Beatrix...
Maradona good. Pelé better. George Best. You’ve heard it countless times. You’ve [ ... ]
football
Kendall, Big Dunc And Me - Meet The Fan Who Became Friends With...
This article first appeared in The Sportsman on 15/12/19 Ray Parr is an Everton icon. He was there when [ ... ]
boxing
Muhammad Ali, Highbury And A Lifelong Love Affair With Britain
When Muhammad Ali, then known as Cassius Clay, first made the trip across the pond in 1963, he was met [ ... ]
football
A Look Inside The Premier League And What To Expect When Football...
The thirst for football is alive and very real. Parched football fans were allowed to take a healthy [ ... ]
motorsport
The Beard Of Brabham - When 'Geriatic Jack' Won The World Championship
In the 70 years of the Formula One World Drivers’ Championship, there have been 32 different winners. [ ... ]
football
127,000 Fans, Ten Goals And The Greatest Game In Champions League...
There have now been 65 years of European Cup competition. 22 clubs have lifted iconic Old Big Ears, [ ... ]
football
Interview: Sylvain Distin On Man City, Everton, And That Portsmouth...
He was the player that Kevin Keegan once described as the perfect defender. The man Louis Saha called [ ... ]
sports
Burgers, Basketball & Fishy Footballers: Sport Stars And Food...
Canada. Home to Moose, Mounties, manners and maple leaves, in that order. But the list can’t be [ ... ]
boxing
Why Sugar Ray Leonard Is The Epitome Of Boxing’s Last Truly...
Sugar Ray Leonard, Roberto Duran, Marvin Hagler and Thomas Hearns, the so-called ‘Four Kings’ [ ... ]
us-sports
On This Day 35 Years Ago, Michael Jordan Was Named NBA Rookie...
It was before the six rings. Before the dream second Gold at the Games. Before the multitude of MVPs. [ ... ]
boxing
The Injustice Of Harry Wills, The Greatest Boxer To Never Fight...
Like many black boxers in the 1920s, a post-Jack Johnson landscape left Harry Wills with very little [ ... ]
sports
Beer, Hot-Dogs And Royalty: The Day Bush Sr Took Queen Elizabeth...
Pop quiz, hot-shot! With her astonishing longevity, Queen Elizabeth II has been around for exactly a [ ... ]
sports
Gabriel Medina, The South American Surfin' Superstar Who Neymar...
On grass they have Pelé, on asphalt Senna, and on water, the great nation of Brazil can count [ ... ]
motorsport
The Birth Of Silverstone Thanks To A Race Between A Prince,...
April 14, 2019, China, and the third race of the season at the Shanghai International Circuit. Lewis [ ... ]
boxing
Remembering Muhammad Ali: Five Of His Greatest Performances...
On June 3 2016, we lost the great Muhammad Ali - not only one of the most important sporting icons of [ ... ]
sports
Russell Crowe, The Leeds United Loving Gladiator Who Bought...
‘Makin’ movies, makin’ songs, and fightin’ round the world’ was how South [ ... ]
football
Wor Jackie! Remembering The Toon's First Iconic Number Nine...
St. James’ Park is one of the biggest football stadiums in England. The home of Newcastle United [ ... ]
us-sports
Chuck Daly: 'Daddy Rich' Tamed Rodman, Bagged Isiah His Rings...
Entering a debate on the greatest sports sides in history should inevitably reach a particular conclusion. Avoiding [ ... ]
football
Wrong Man, Wrong Place, Wrong Time: David Moyes' Mission Impossible
On May 9, 2013 it was announced that David Moyes was to be put in a position he alone will ever occupy.  [ ... ]
boxing
Heroin, The Mob And A Left Jab From Hell: The Tragic Tale Of...
“One day they’re going to write a blues song about fighters. It'll just be for slow [ ... ]
us-sports
Remembering Mr Sunshine And The 2529 Games That Ernie Banks...
May 8 1973: sports history is made. Stepping out into the arena of Candlestick Park, in Bayview Heights [ ... ]
ufc
Who is Justin Gaethje, “The Most Violent Man in the World’s...
“My name is not coronavirus. My name is Khabib.” With that, a noticeably irritated UFC lightweight [ ... ]
boxing
The Sportsman Interviews Joseph Parker - Self-Isolation's Greatest...
Professional heavyweight boxer, Joseph Parker, has proved himself one of the great surprises to rise [ ... ]
us-sports
The Crazy Times Of Kareem Abdul-Jabbar, The NBA All-Star Who...
Being the number one draft pick in the NBA can be a poisoned chalice: the full-fat meal of hype, prestige, [ ... ]
football
The '49 Grande Torino Serie A Champions And The Flight That...
The dates of the demise of the greatest football sides can vary. To pinpoint exactly the end of a particularly [ ... ]
football
The Day Leicester City's 5000/1 Premier League Fairy Tale Became...
The odds were 5000 to one. It wasn’t written in the Premier League script. The manager in charge [ ... ]
This website uses cookies
Cookies help us and our partners provide statistics. By browsing this website, you consent to the use of cookies in accordance with our Privacy Policy and Cookies Policy.
Accept & Close