There are few worse moments to lose control than when driving at 140 miles per hour.

The events on just the second lap of the Nürburgring sear furiously in the mind; once witnessed, never forgotten. A flailing Ferrari coming loose on the 14-mile, 174-turn track, the car conflagrating whilst orange, yellow and blood red flame produces a dance of death, before the shock comprehension that within the inferno lies a human being.

The result? The last rites. Skin on the head and face burned all the way to his skull. Hands offering no protection and being practically melted. Lungs and blood shot to pieces by inhaled plastic and the motor fuel that was the professional lifeblood becoming toxic gas. The loss of an ear.

And then, in defiance of mortality, a return. The crawl back from the verge of death, the physical recuperation and the mental one. From witnessing your main rival winning the Championship to recapture it for yourself. To then step away for two whole years from the one thing you’ve always known, before a triumphant return which eventually led, on 21 October 1984, to become a three-time Formula 1 World Drivers champion by finishing second in the season-ending Portuguese Grand Prix at Estoril to win the title by just 0.5 points.

An icon who turned scars into symbols as a permanent reminder of the sacrifice and the danger that has had an uncomfortable but perpetual relationship with Formula One.

“I leave the scars here for all the drivers to see what racing can do to them,” said the man who sported them proudly, Niki Lauda.

Before Lauda’s accident at the German Grand Prix of 1976, there had been 38 different driver fatalities in Formula One.

The organization had only been in existence for 26 years. 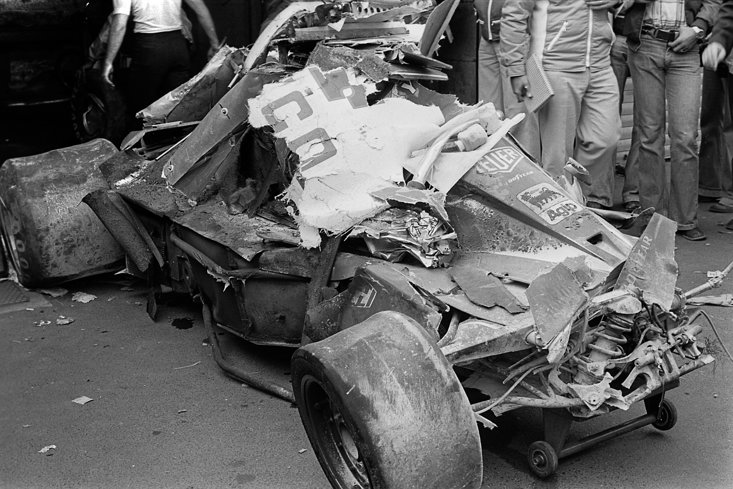 THE WRECKAGE OF LAUDA'S FERRARI

In the decade leading up to 1976, Kevin McConway, Professor of Applied Statistics at the Open University, analysed that drivers had a 0.35% chance of dying each time they competed in a Grand Prix including any practice and qualifying sessions. The odds rose to 4.4% across an F1 season and higher still if a driver participated in every race for five years. At that point his chance of death was hitting 20%, or as contextualised by the BBC, the risk to a Formula 1 driver dying per race was equivalent to travelling 1.5 million miles by car today or completing 500 skydives.

If only those fatalities that occurred during either a F1 World Championship race or practice are counted, then there were fewer than two deaths each year. In total, eight drivers died in the 1960s and nine in the 1970s.

"When some of these claims are made about the incidence of death in Formula 1, there is a bit of a grey area as to the fact that there was a high incidence in motor sport in general," explained Roger Smith to the BBC in 2013, to coincide with the Lauda/ James Hunt biopic Rush.

"Some of those Formula 1 drivers who can be listed as the death of a Grand Prix driver actually were driving other forms of motorsports… Indeed [F1 Champion] Jim Clark was killed in a Formula 2 accident in 1968."

Formula 1 drivers killed across the board accounted for 29 deaths in the 1960s and 18 in the 1970s. Racing legend Sir Jackie Stewart, winner of three World Drivers' Championships, would insist, “If you raced for five years in Formula 1 there was a two out of three chance you were going to die." Not quite. In fact it was around 50%. Safety wasn’t mandatory. In fact it was virtually ignored. Indeed, up until four years before Lauda’s accident, seatbelts weren’t required.

We may applaud Lauda reentering the cockpit just 40 days after Nürburgring to compete and eventually retake his crown (twice) but his effect on the safety of the sport - both directly and indirectly - was the effect to celebrate most. It was the Austrian who, somewhat ironically, had famously called on fellow competitors to boycott the dangerous circuit ahead of the race that he would almost perish in.

In the aftermath, tracks were made shorter - in addition to helping safety cars and firetrucks get to the scenes of accidents quicker - and the old Nürburgring, the track Jackie Stewart nicknamed "The Green Hell", was abandoned first by F1, then motorsport altogether. 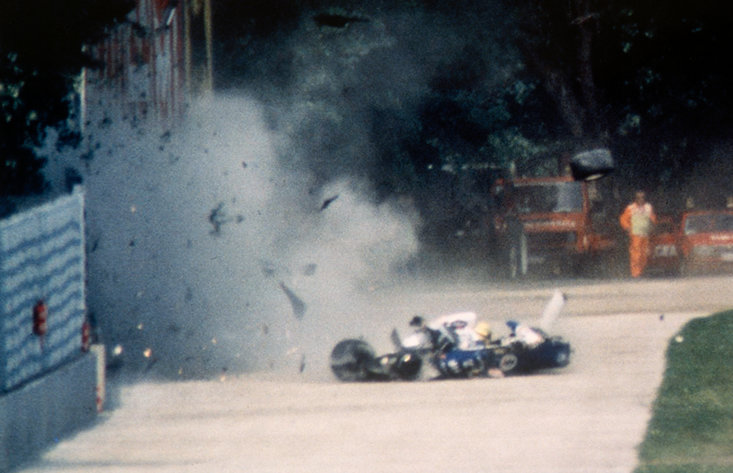 Lauda’s inferno can be seen, for the better, as an end of the age of innocence for Formula One. Across the next two decades, up until the tragic San Marino weekend of 1994 that claimed the lives of both Roland Ratzenberger and Aryton Senna, there were just seven F1 race-related deaths, three in a Grand Prix. Senna’s death had an even more dramatic effect on the sport. Formula One implemented better helmets, as well as the head and neck support that prevented rapid and excessive movement during accidents, while cars have been made safer and the cockpit opened more to prevent drivers from being trapped inside.

There were 21 years between F1 fatalities before Jules Bianchi died on 17 July 2015, after nine months in a coma, as a result of crashing into a recovery vehicle at the 2014 Japanese Grand Prix and suffering a diffuse axonal injury, at the age 25. Since the 2018 season the FIA has made the halo - a driver crash-protection system which consists of a curved bar placed to protect the driver's head - mandatory on every vehicle in Formula 1, Formula 2, Formula 3 and Formula E as a new safety measure. 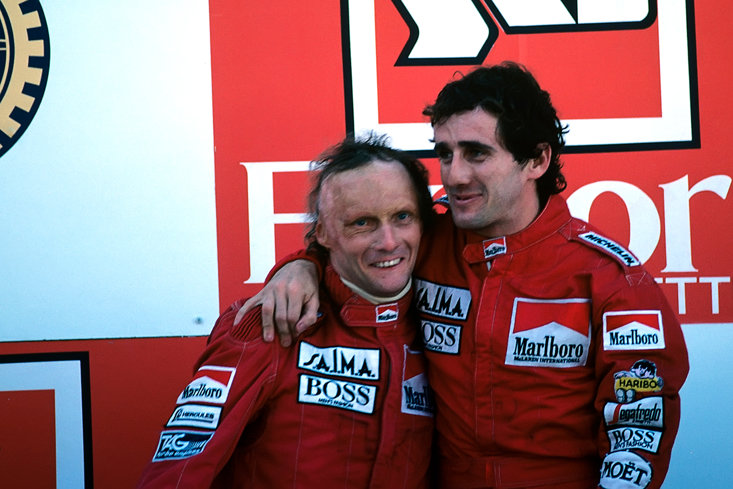 ALAIN PROST CONGRATULATES CHAMPION LAUDA ON THIS DAY IN 1984

F1 is a tapestry, and though it has been stained with tragedy, it has produced enviable narratives that have threaded it into a cultural institution, through artistry, creativity, spontaneity. And spontaneity is dangerous.

Several years before his death in 2019, Lauda was still preaching caution in the push for safety which he believed was swamping the sport. "Why are we watching?" Lauda asked. "Good racing, a bit of danger -- always there. And unbelievable driver performance to keep these cars under control.

"My opinion is if we continue only to think of making it 110% about the safety issues, we're going to destroy Formula One."

While the 2000s remains the only decade to date in which no F1 driver was killed, the hope is that the 2020s will yield a similar return without the sport changing beyond all recognition. But when assessing how and why the sport began to take safety seriously in the modern sense, it all comes back to Niki Lauda.

x
Suggested Searches:
Tyson Fury
Manchester United
Marcus Rashford
Lewis Hamilton
F1
Air Jordan
More
us-sports
Remembering ‘The Big Cat’: The NBA Icon Who Paved The Way For...
At the last census, across 30 different franchises, just under 75% of National Basketball Association [ ... ]
football
£9M Deals And 2.7M Insta Fans, It's The Top Teens In European...
Youssoufa Moukoko made history in November, becoming the youngest player ever in Bundesliga history, [ ... ]
football
Bugattis, Ferraris, Lambos, Top Five Motors From Ronaldo’s Insane...
On paper, Cristiano Ronaldo has everything. A chiselled body, a giant mansion and a delightful family [ ... ]
motorsport
First Men In: Jennie Gow Talks To The Heroes Who Pulled Grosjean...
When the first responders, Dr Ian Roberts and Alan van der Merwe, pulled up to the stricken Haas car [ ... ]
boxing
The Home Of The $1BN Boxing Deal Lands In The UK, All You Need...
Are you ready to get into DAZN? Finally, it’s sunlight for the British-based blockbuster subscription [ ... ]
sports
Feast Your Eyes On Our Five Fantasy Gifts For The Fitness Fanatic...
Every family’s got one, the fitness fanatic. The one who’s a slave to the strava, the one [ ... ]
cycling
How Emily Chappell Went From Courier To Conquering The 4,000km...
Emily Chappell was once an imaginative inner-city courier, who thoroughly enjoyed riding round metropolitan [ ... ]
sports
Bow Down To Keegan Hall, The Artist Behind This Amazing Drawing...
With just a handful of pencils, a $5 sheet of paper and a whole lot of talent, Keegan Hall blew up the [ ... ]
football
Money, Moods And Mario: Micah Richards On Life At Manchester...
Micah Richards has admitted that Manchester City’s takeover more than a decade ago split the dressing [ ... ]
sports
Big Waves, Exotic Dancers, The Life Of UK’s First Pro Surfer,...
Hawaii is a lost paradise. Ted Deerhurst was drawn there as a dreamer. It was his Mecca, the ultimate [ ... ]
football
With 313 Goals Between Them, It's Football's Greatest Ever Goalscoring...
It’s one of the sights which makes football fans giddy, a goalkeeper striding up for a corner. [ ... ]
boxing
Anthony Joshua And Me: Legendary Team GB Coach Reveals All About...
“He was shaking like a leaf!” Paul Walmsley, Anthony Joshua’s former Team GB [ ... ]
sports
Career Ending Dogs And Huge Gatecrashing Alligators, When Animals...
We love all creatures great and small but sometimes pesky critters and colossal creatures, [ ... ]
rugby
Wales Face Strong England Against A Backdrop Of Departures,...
It has been 20 months since Wales lifted the Six Nations trophy as Grand Slam champions. Wayne Pivac [ ... ]
boxing
The Mike Tyson Interview: ''Living Takes A Lot Of Courage''
Mike Tyson’s life has been a well-documented roller coaster ride. A difficult childhood, then [ ... ]
football
The Secret Boot Camp And Drills That Made Marcus Rashford The...
If we’ve learned one thing about Marcus Rashford in 2020, it’s that he doesn’t rest [ ... ]
boxing
35 Years Of Rocky IV, 10 Hard-Hitting Facts About Balboa’s Greatest...
Can you believe it’s been 35 years since Sylvester Stallone’s Magnum Opus, Rocky IV, premiered [ ... ]
sports
How The Art Of Ice Climbing Saved The Life Of Teenage Drug Addict...
At just 12 years old, Margo Talbot was using drugs and drink to help medicate her juvenile depression. [ ... ]
boxing
When's It On? How To Watch? Why No Knockouts? Your Tyson-Jones...
Haters gonna hate. For Taylor Swift 2014, read Mike Tyson 2020. He’s back in the ring this weekend [ ... ]
sports
Ruqsana Begum, The Kickboxing Champ Who Kept Her Career A Secret...
Muay Thai kickboxing isn’t for the faint of heart. Pain is a bedfellow. An adrenaline-fuelled [ ... ]
sports
Meet The Man Who Can Hold His Breath For 7 Minutes And Freedive...
“The look, of love….is in your eyes...”  One hundred metres underwater, with [ ... ]
boxing
Anthony Joshua's £1M Car Garage Boasts A Stretch Roller And...
Killer speed, energetic and ferocious, Anthony Joshua’s car collection is just like his boxing [ ... ]
football
To Naples And To The World, Maradona Was More Than Just The...
Naples is not a city, it’s an experience. It is a heartbeat, a way of life. Diego Maradona got [ ... ]
sports
How Emily Harrington Became The First Woman To Climb 3000ft...
There was 3000ft of sheer granite between Emily Harrington and greatness. The monolith had proven her [ ... ]
football
All Hail Roc Nation, Jay-Z's £56M Powerhouse With Rashford And...
Seriously, how can Jay-Z possibly have 99 problems when his brilliant entertainment company Roc Nation [ ... ]
motorsport
Stand By For The Resurgence Of Ricciardo At McLaren In A Tantalising...
All the great love stories have a happy ending, with the protagonists finally getting together after [ ... ]
motorsport
Monte Carlo To The Arctic Circle, The Five Wackiest Racing Tracks...
As the Baja 1000 drew to a close in Mexico this weekend it marked the end of one of the craziest races [ ... ]
us-sports
About Time! Why Trailblazing Kim Ng Is The Perfect Person For...
The reader’s letter to the New York Times editor proclaimed, "A trailblazer who has been [ ... ]
boxing
The Times Tyson Fury Used Bespoke Fashion To Get Inside His...
Tyson Fury loves a knockdown and he loves a put down. He’s got a particular way with words but [ ... ]
rowing
The Brit Who Rowed The Atlantic, Pacific And Indian Oceans In...
Sarah Outen has pretty much conquered the planet, en route becoming a superlative-defying superstar [ ... ]