Sports
Features
The US athlete has gone from difficult beginnings to world dominance
Simon Lillicrap
16:53, 09 Oct 2019

She may only be 4 ft 8 in, but Simone Biles is standing tall this week as she aims to establish herself as the most successful gymnast of all time. Now with 21 World Gymnastics Championship medals to her name, she is the most successful female of all-time and could surpass Vitaly Scherbo’s all-time record of 23 before the end of the tournament.

She qualified in first place for the all-around, balance beam and floor finals and also made it through to the vault and the uneven bars final. The all-around final takes place on Thursday and if she wins gold in that, she will be just one medal away from matching the all-time record ahead of the weekend finals.

However, this piece of history is not on her mind as she told the BBC:

I never think of records - I just go out there and do what I came to do. Every year it feels better and better, just because we're adding to the legacy.

However, it has been a long and arduous journey to make it to this stage for the 22-year-old, who has not allowed her difficult childhood circumstances to hold her back.

Her parents did not play a big part in Biles’ life as they battled addiction over a lengthy period. Her father, Kelvin Clemons, abandoned his young family due to his struggles, while her mother was also a victim of drug and alcohol addiction. After her mother lost custody of all four children, Simone was to spend three years in and out of care before her grandfather Ron stepped in to return her to a family environment.

At the age of six, she was adopted and raised by Ron and his wife, Nellie, who Simone now considers to be her father and mother. The pair have been mainstays ever since adopting Simone and her younger sister, supporting her in a sporting sense right from the day she first tried gymnastics at the age of six, through to watching her become the most successful female gymnast ever this week.

Writing for CNN last year, Biles said of her childhood:

“Although I was young when my foster care ordeal began, I remember how it felt to be passed off and overlooked. Like nobody knew me or wanted to know me. Like my talents didn't count, and my voice didn't matter.”

Her brother, Tevin Biles-Thomas, has perhaps provided an example of what could have been for one of the greatest sportspeople of all time had she ended up heading down a different path. Last month he pleaded not guilty when charged with homicide after three people died at a New Year’s Eve shooting in Ohio.

Making A Name For Herself

Her senior career got off to a flying start in 2013 as she tasted success at the World Championships in Antwerp in the All-Around and Floor Exercise, scooping the gold medal in both events. The following year she became a household name in her homeland as she won four gold medals at the World Championships in Nanning and 12 months on she repeated the feat in Glasgow, defending her titles in all four events.

Ahead of the Rio Olympics in 2016 she was the shining light of a talented American team and everybody wanted a piece of her. Heading into the biggest show on earth she had endorsement deals totalling over $4 million with major companies including Nike, Hershey’s and Kelloggs all wanting to have their name associated with the queen of gymnastics.

Nelson Freitas, chief strategy officer at Wunderman New York explained at the time: “Simone Biles represents the quintessential American dream, and that’s what makes her such a powerful brand ambassador.”

Simone Biles
@Simone_Biles
usa is in the house bby 🇺🇸 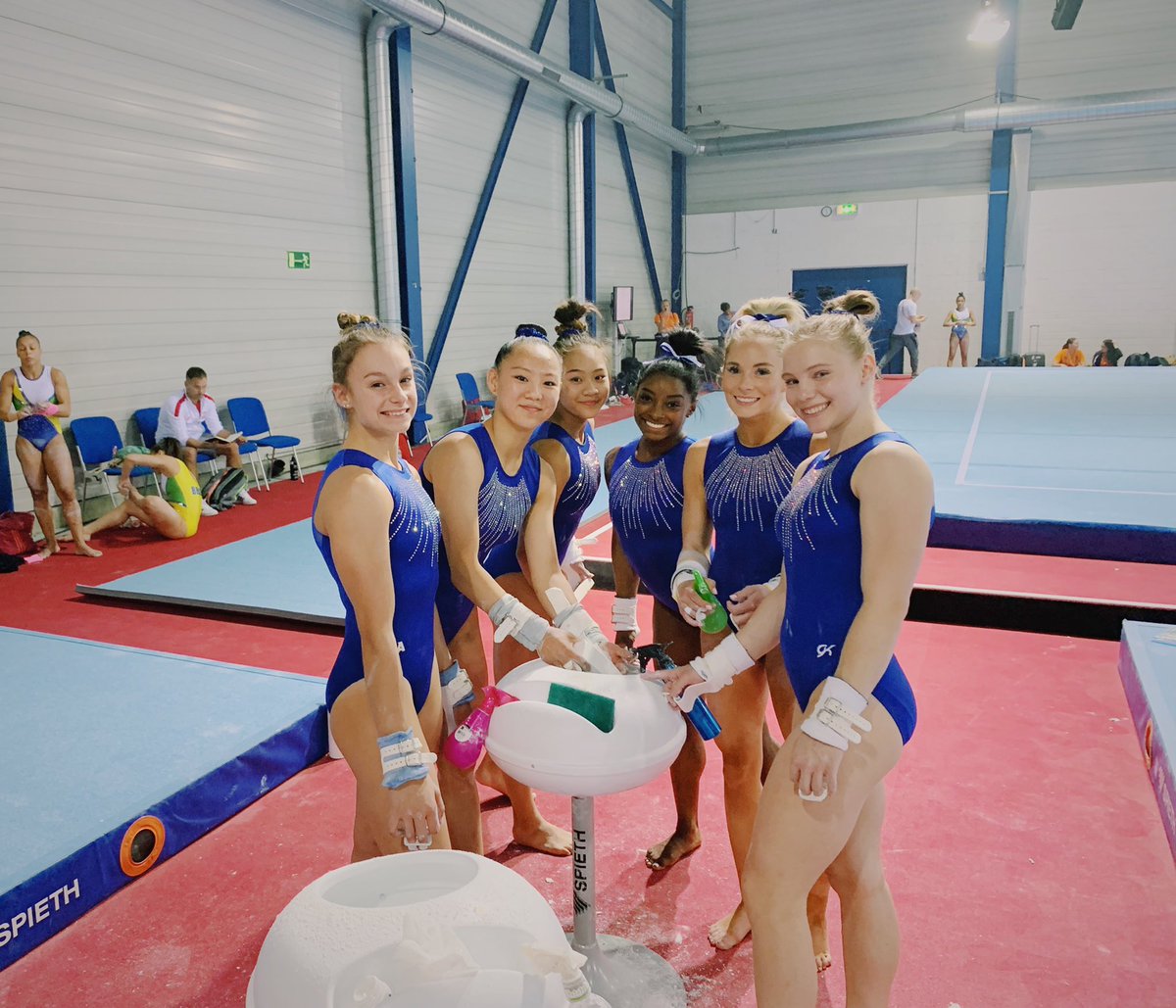 With the world watching, on the biggest stage of them all, Biles produced. She won four Olympic gold medals and one bronze, setting an American record for the most gold medals in women’s gymnastics at a single games.

She won Team, All-Around, Vault and Floor gold and took bronze in the Balance Beam event, proving to the world she was nothing less than a superstar. As a result of her phenomenal performance she was chosen to carry the flag at the closing ceremony, the first female gymnast from America to be bestowed with that honour.

Biles is not only a fine athlete but also a brave and mature human being. In January of last year she posted on Twitter as part of the #MeToo movement, explaining that she was one of many people to have been sexually abused by convicted paedophile and former national team doctor Larry Nassar.

She posted on Twitter: “I too am one of the many survivors that was sexually abused by Larry Nassar. Please believe me when I say it was a lot harder to first speak those words out loud than it is now to put them on paper. There are many reasons that I have been reluctant to share my story, but I know now it is not my fault.”

Simone Biles is still making history, having had two signature moves now named after her. ‘The Biles’ is a beam landing and ‘The Biles II’  is a triple-double on the floor, two moves that are not ranked high enough in terms of difficulty by judges, according to Biles herself.

Her celebrity status has meant she has been praised by some of the biggest names in the world. She was invited to the White House to meet the Obamas, while NBA great LeBron James regularly tweets his support of her, as do model and TV personality Christine Teigen and British actress and presenter Jameela Jamil.

The list of positives about this superstar are endless. From her difficult background to the utter domination of her sport, we are simply in awe of Simone Biles.

BBC Sport
@BBCSport
Simone Biles is so good, they've had to start naming the moves after her.
Incredible!
36
255
x
Suggested Searches:
The Sportsman
Manchester United
Liverpool
Manchester City
Premier League
More
boxing
On This Day: Sugar Ray Leonard Edges Past Marvin Hagler In Titanic...
"How do you like it, how do you like it?!"   The commentator's words rang out [ ... ]
football
''I Believe In Fairies'' - The Life And Times Of The Extraordinary...
Brian Clough wasn’t just one of the most quotable managers in English football’s long history, [ ... ]
football
Rangnick Right About Fourth Being United's Ceiling, But He Shouldn't...
"We want to finish fourth in the league, this is the highest possible achievement we can get.” [ ... ]
boxing
Angelo Dundee: Three Masterpieces From Boxing’s Greatest Trainer
Perhaps the greatest cornerman of all-time, Angelo Dundee guided the careers of sixteen world champions [ ... ]
boxing
The Day Ali Talked A Suicidal Man Down Off The Ledge Of A Beverly...
Wilshire Boulevard in Los Angeles cuts right through the heart of Beverly Hills. One particularly famous [ ... ]
boxing
From Broadway To Hostage Negotiation: Ali's Best Moments Outside...
Muhammad Ali transcended the world of not just boxing, but sport as a whole, like no other athlete who [ ... ]
football
Zaha's Double, 1989 And 'Poogate': Inside The Brighton v Crystal...
This article first appeared in The Sportsman on 27th September, 2021 Crystal Palace against Brighton [ ... ]
boxing
George Foreman’s Faith: How The 45-Year-Old Heavyweight Stunned...
George Foreman swept through the heavyweight division like a hurricane, obliterating nearly all who [ ... ]
boxing
Last Round, Folks: When Boxing’s Invisible Champion Was Blitzed...
History has not been kind to Floyd Patterson. Countless world champions have drifted through the annals [ ... ]
boxing
The Life And Times Of Heavyweight Legend Jack Johnson
What do Alan Turing, The Doors frontman Jim Morrison and the comedian Lenny Bruce have in common? These [ ... ]
boxing
Pacquiao: From Poverty-Stricken School Drop-Out To Eight-Weight...
"I knew without a doubt I would become a fighter - I knew that the underdog can, and often does, [ ... ]
sports
Hulk Hogan, Mr. T And Madison Square Garden's Five Greatest...
It’s named after the fourth President of the USA. It’s where George Harrison had his concert [ ... ]
snooker
VR Mishaps, Pig Farms And American Hustles: When Ronnie O’Sullivan...
As it's snooker legend Ronnie O'Sullivan's 46th birthday, we thought we'd take [ ... ]
sports
Meet The Man Who Climbed Everest, Partied For A Week, Then Climbed...
This article first in The Sportsman on 08/12/19 There’s nothing normal about Nirmal Purja. After [ ... ]
motorsport
Frank Williams - A Formula One Pioneer Whose Team Went To The...
For much of the 1980s and 90s, Williams Racing was the biggest name in Formula One and Frank Williams [ ... ]
football
How Cantona Made Manchester United The Dominant Force Of The...
It started with Leeds United making an enquiry about signing Denis Irwin and finished with Manchester [ ... ]
football
Almost 30 Years Since THAT Goal, Davide Gualtieri Is Still San...
8.3 seconds, 28 years ago. That’s all it took for part-time footballer, part-time computer [ ... ]
boxing
River Wilson Bent Talks Coventry City, Newborn Baby And British...
“Imagine if Coventry City made it to the Premier League and I brought the British title home for [ ... ]
football
Neil Warnock - The Record Breaking Football Lover That Just...
When the whistle blows at Kenilworth Road for Luton Town's home match against Middlesbrough on Tuesday [ ... ]
football
Leicester's City Progress Is Proof That Vichai's Vision Has...
On this day three years ago Leicester City lost their influential owner, Vichai Srivaddhanaprabha in [ ... ]
rugby-league
The Birth Of The Grand Final: Rugby League's Biggest Of Big...
“I’ve said it for years… the last game of the season should be the most important,” [ ... ]
football
Celebrating Arsenal's Invincibles With The Stats That Tell The...
There’s Sergio Agüero winning it in Fergie time. Liverpool finally ending 30 years of hurt [ ... ]
football
From Balotelli To Bullard, The Premier League's Greatest Ever...
It's been a full decade since Mario Balotelli lifted his shirt in Manchester City's 6-1 [ ... ]
motorsport
On This Day: Rookie Lewis Hamilton Loses F1 Title In Controversial...
On this day in 2007, we witnessed perhaps the greatest end to a Formula One season we have ever seen. [ ... ]
motorsport
How Lauda's 140mph Crash Marked The End Of The Age Of Innocence...
There are few worse moments to lose control than when driving at 140 miles per hour. The events on just [ ... ]
football
FA Cup Round-Up: Brilliant Buxton Make First Round As Dorking...
It was a night when Dorking Wanderers saw their dreams dashed by Hayes and Yeading, Stratford made some [ ... ]
us-sports
Celebrating Jim Brown - The NFL Movie Giant Who OJ Robbed Of...
Before OJ there was the OG. The Original Gangster. In fact he was front and centre of an action-packed [ ... ]
football
Sheriff Tiraspol - The Champions League Club With Two Faces
On the surface, it has been the underdog story of the Champions League so far. Never before has a club [ ... ]
boxing
From Taming Tyson To Bashing Buster, Evander Holyfield’s Best...
Today marks the 59th birthday of one of the best boxers to lace up a pair of gloves in the modern [ ... ]
football
Fernando Torres - Atletico's Local Hero, Liverpool's Tainted...
‘This means more’ is Liverpool’s oft-derided motto, but when they face Atletico Madrid [ ... ]