If there is one thing for certain, it is that South Africa doesn’t do average.  Especially in rugby.

The pendulum that had swung so far towards disaster in 2017, pinned itself firmly on the other side as the Springboks completed an epic journey to win the 2019 Rugby World Cup.

To think that just 18 months ago when Rassie Erasmus took over the coaching of the team they were downtrodden, had just lost to the All Blacks by 57 unanswered points and were at a lowly seventh in the world.

Erasmus’ meticulous planning, his player-driven self-belief and his honest approach to coaching not only turned the team into World Champions, but it led a nation to believe once again.

Rugby has always had a special place in South Africa. From the protestor-tours of the 60s, 70s and 80s in the Apartheid years to that Mandela moment in 1995, where the elder statesman was punching his arms behind Francois Pienaar as the rainbow nation defeated the odds to win one of the most epic Rugby World Cup finals in history.

On Saturday the sequel was etched into folklore. And the scriptwriters could have chosen no better way of ending the first World Cup in Asia.

South Africa’s first black captain, a player who has risen from the dust of Zwide township to the heights of Yokohama, who found and adopted his two half-brothers from foster care, who epitomises the rainbow nation with a mixed marriage and has the softest heart of a rugby player you’d ever find – lifted the Webb Ellis Cup.

It set off rapturous celebrations across the country at a time when South Africans needed it most. With the rainbow nation project fracturing, it reminded South Africans again that they are more than their worst shadows. Together a nation can achieve anything.

And they did. Erasmus’ brilliance ripped up the script of the traditional four year cycle. He found a way to make players believe – almost bloody-mindedly that nobody could stop them. He found a way to return to their strengths while integrating the best parts of different rugby cultures into a team that so often was torn apart by differences. And he did it in 18 months. 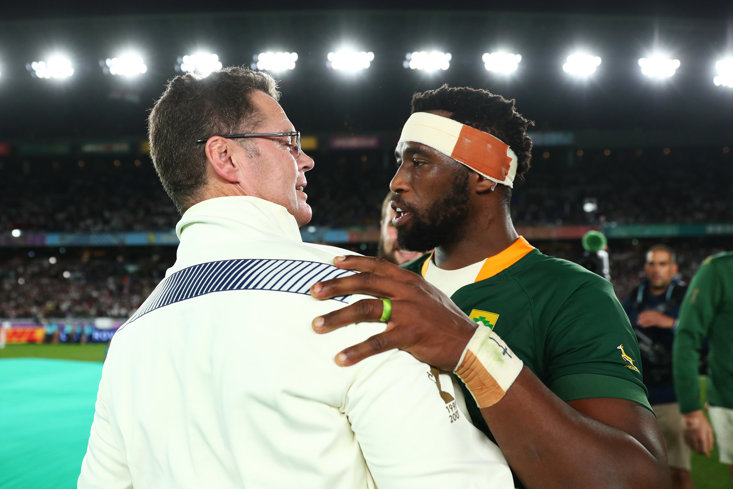 While in Kolisi he had the perfect captain, his forward pack was almost unbeatable. Tendai Mtawarira – or the “Beast” as he is known – was rejuvenated to lead a pack that demolished England in the final. Cheslin Kolbe, told so many times he was too small for international rugby, thrived in dancing through defences to score tries that seemed impossible. Makazole Mapimpi, a player who represents the deep heartland of black rugby in the Eastern Cape, showed on the international stage that belief can move mountains.

To understand the approach Erasmus took, you have to understand South Africa and its complex nature. Erasmus underlined it with the way they adapted after the opening loss to the All Blacks. Six weeks later they became the first team to have lost a pool match and still won the World Cup. But in a South African context, Erasmus knows all too well rugby is a small microcosm of bigger battles the country faces.

“It was my first World Cup as a coach and the first All Blacks game was a great test ground for us handling pressure. We were terrible that week, we were tense and it was a terrible build up and that taught us how to handle the quarter-final and semi,” Erasmus explained after his win.

“In South Africa it [pressure] is not having a job, having a close relative who is murdered. Rugby should not create pressure, it should create hope. We have a privilege, not a burden.“Hope is when you play well and people watch the game and have a nice braai [barbecue] and watch the game and no matter of political or religious difference for those 80 minutes, you agree when you usually disagree. That is our privilege and that was the way we tackled it.” 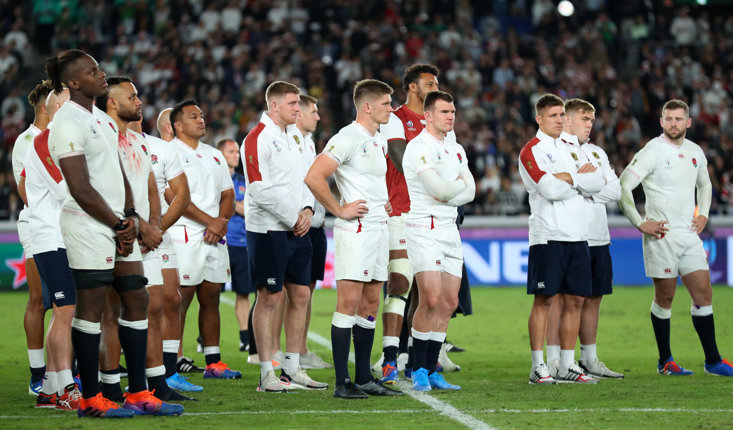 England’s multi-million pound venture may have failed at the final hurdle, but in beating the All Blacks comprehensively they turned World Rugby’s hierarchy on its head. One loss doesn’t mean failure, even on the biggest stage.

Eddie Jones has transformed England into one of the best outfits in World Rugby and their success at Junior levels in recent times could see this continuing for years to come. While many will be disappointed with the final result, Jones gave England hope again, and going forward the challenge will be to build on the platform he created.

"The players prepared tremendously well for this World Cup and played with a lot of pride, passion and we got caught short today. These things happen. But you can’t doubt the effort of the players. I thought they were extraordinary.”

On the night Jones’ plan collided with that of South African coach Erasmus. And as the dust settles on an epic Rugby World Cup, its hard not to feel that perhaps, just perhaps, South Africa needed this victory more in the larger context of things.

Kolisi lifting the golden trophy may not be what England fans wanted, but like Japan’s victory over South Africa in Brighton in 2015, it may be just what the sport needed.

More
football
David James Steps Up To Protect Perilous Grassroots Football...
“The club is the fabric, the life and soul of the community. Taking Maslow’s hierarchy of [ ... ]
golf
How Steaks And Shakes Fuelled Bryson DeChambeau's 'Bomb And...
He’s the coolest scientist since Breaking Bad’s Walter White, only he’s used his powers [ ... ]
football
Why You Should Still Have A Whole Lot Of Love For The League...
The League Cup needs some love. The unwanted and unloved fourth child of English football, without the [ ... ]
boxing
Born To Box: The Extraordinary Story Of Nipper Pat Daly
“They’ll laugh at you, son. Wait until you’re a little older.” It’s 1920s [ ... ]
boxing
Mia St. John - The Boxing World Champion Using Her Power For...
Mia St. John had a purpose in life. It was, in her own words, “to kick somebody’s ass”. [ ... ]
football
From The Ox To Dele Alli, Meet The Photographer Trusted By Football's...
Matt Gordon enjoys PlayStation with Liverpool’s Trent Alexander-Arnold, holidays with rising football [ ... ]
football
Robbie Fowler By Numbers: From L8 to Liverpool Legend
A ferocious storm straight from the heavens hit west London on Wednesday 22 September 1993. Craven Cottage [ ... ]
football
The Crazy, Continent-Crossing, Love Affair...Welcome To The...
5,031 miles. That's the exact distance that separates Aston in Birmingham from the Ghanain village [ ... ]
sports
From Kelly Slater To Serena Williams, The Athletes Stepping...
“We are facing a man-made disaster on a global scale.” Not our words but those of Sir David [ ... ]
football
Fenerbahce's Light Out Of The Dark: When Turkish Women Ruled...
Hearing the cry of ‘Women and children first!’ could understandably take you to that freezing [ ... ]
boxing
Finding Mike - All The Details So Far On Jamie Foxx's Tyson...
Mike Tyson is one of the most explosive and enigmatic sportsmen of all-time. His life has been one of [ ... ]
football
A Wonder Of The Footballing World: Celebrating The San Siro
The position as a modern-day Antipater would be unenviable if one was tasked with nailing down the Seven [ ... ]
boxing
Ken Norton, The Former US Marine Who Used A Self-Help Book To...
Not a soul in attendance, even in his adopted hometown, believed Ken Norton had a chance of beating [ ... ]
football
11 Points And Down In March: Derby County's Nightmare Premier...
It is the 39th minute at Pride Park in front of a roaring 33,000 strong crowd, the majority of whom [ ... ]
motorsport
184MPH On A Push Bike... Meet The Fastest Cyclist In The World
The scorching Bonneville Salt Flats of Utah. As far as the eye can see, the view is only a two-tone [ ... ]
football
Thanks Gaffer - The 19th Century Moniker Modern Footballers...
If you watched ‘The English Game’ on Netflix recently, the countless differences between [ ... ]
football
We’ll Raise Your 27-0 And Give You 31-0, The Biggest Hammerings...
Winning provides happiness. Losing provides wisdom. In football, it takes two sides to create history, [ ... ]
football
Joaquin, We Salute You - Real Betis Royalty Who’s Reigned For...
Eight years. That’s the average length of a professional footballer’s career. Average. Joaquin [ ... ]
football
From The Work Of Art To The Throwback, The Season's Best New...
Leeds United were the first. That’s right, the Elland Road club who are back in the Premier League [ ... ]
tennis
From Stockport Rebel To Hollywood Favourite, How Fred Perry...
“I’m a great believer in trying to look the part. It’s a fetish with me.” For [ ... ]
football
Germany Vs Bayern? Brazil Vs Exeter? These Are The Best Club...
The club versus country row has increased this century, with the soaring popularity of the Premier League [ ... ]
football
Bill Shankly - The Teenage Miner, Midfield Star And Managerial...
Bill Shankly wasn’t only a great football manager, you know. He was one hell of a player too. [ ... ]
tennis
Why John McEnroe Epitomises The Best In Tennis And How It Can...
It’s nearing the end of the long, hot summer. The year is 1984. You’ve got your Member’s [ ... ]
football
Toffees, Trophies And T90s: Rooney’s Football Journey Through...
Wayne Rooney’s right foot was explosive, like a traction engine as Alan Partridge would put it, [ ... ]
tennis
Remembering Little Mo, The Grand Slam Winning 'Killer In Pigtails'
No other player has arguably had such a profound effect on tennis, in such a tragically short space [ ... ]
cricket
It Pays To Be Patient: The Sportsman’s Ode To 140 Years Of Test...
Can you imagine trying to sell Test cricket to the public in 2020, if it was a new invention? Given [ ... ]
boxing
First Glimpse Of Greatness: When Ali Fought Fear With A Parachute...
As he sat there on bended knees in the middle of the aisle, the beads of sweat rolling down his forehead [ ... ]
boxing
The Newport Rocky: The Best British Boxer You’ve Never Heard...
Before David Haye and Tony Bellew, there was David ‘Bomber’ Pearce. A British cruiserweight [ ... ]
us-sports
Vince Lombardi: NFL Legend, Pursuer Of Perfection, Champion...
His name adorns American football’s ultimate prize thanks to his outstanding record as a coach [ ... ]
tennis
Serena Williams Doesn't Need The Grand Slam Record - She's Already...
There is no benefit in asking when it will end, just be glad that it’s happened. And still happening. [ ... ]