There is a freshness to the air in the Earthquake Memorial Park in Kobe harbour in Osaka Bay. For those of us used to going to football full of anxiety and last night’s food and drink it doesn’t feel like a football day at all.

The morning tide glides in, lifting the moored working boats. The subtlest of breezes comes with it, slipping past huge sculptures, fountains and towers erected to commemorate those who didn’t survive the devastation of January 17th 1995.

Twenty-five years on the only sound you can hear is the distinctive clack of skateboards on concrete. There’s no trace of football here but the local club, Vissel Kobe, and the earthquake are indelibly linked because the day 40,000 citizens lost their life coincided with the club’s first week of professional training.

As football clubs go it was probably the worst start ever. And you thought losing 2-0 to the bottom club in the table was bad. The city’s working harbour was ripped apart, cranes buckled, concrete piers collapsed, flyovers split like a broken Hot Wheels track, and fires broke out everywhere.

Faced with the sheer horror of what had happened, many newly-launched enterprises might have just packed in. This was an option for Vissel Kobe, especially given that many of the newly-founded club’s commercial sponsors were hit so hard they had to redirect their funding back into their own businesses.

The Vissel Kobe training pitch was destroyed, and head coach Stuart Baxter, out of the country on a scouting mission, could only watch the news from afar, gripped by the terrible realisation that players, staff and fans would all have lost loved ones. But instead of shutting up and giving in the club immediately relocated the business to a nearby factory with available office space, and there they simply began to practice in the car park.

The move offered a sort of civic optimism that didn’t go unnoticed, and, in a state of shock, many of the club’s neighbours, now homeless and grieving, came to the newly-formed football team and watched them going through their workouts with the ball on tarmac. Moved by the attendance, the club shared their water, food and what other hospitality they could muster, and the community never forgot that. A special bond was formed, the city rebuilt itself, and the Kobe football and baseball clubs became a focus for the recovery. 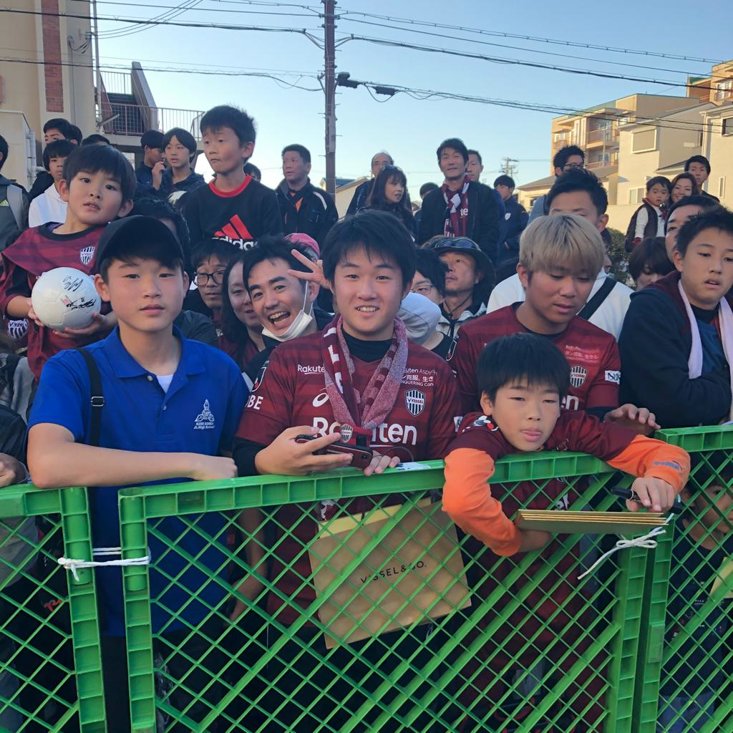 In a new century and a new-look stadium Vissel Kobe still has a passionate support but structurally it is a different beast altogether. It’s a worthy destination for the curious football traveller. The playing squad boasts veterans of the Champions League, the Noevir Stadium hosted matches at last year’s Rugby World Cup, and the club is owned by Hiroshi Mikotani, a local fan with a global outlook and one of Japan’s leading businessmen.

You’ll know of his company, Rakuten. It is a thriving multi-media company which sponsors Barcelona’s shirts. Partnering with Gerald Pique, Mr Mikotani just acquired the Davis Cup tennis tournament. Vissel Kobe also like hiring ex- Barcelona players. It was this link that caught my attention. 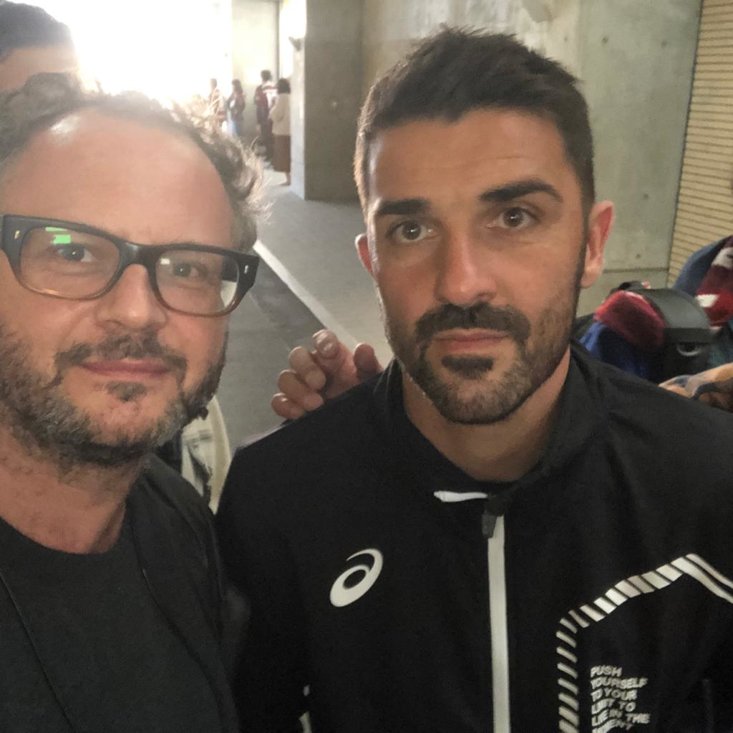 In Kobe you will find Andres Iniesta still making unbelievable passes, David Villa ending his career, Thomas Vermeulen on the physio’s bench,  and young midfielder Sergi Samper buzzing round the middle of the pitch. He’s the least stellar of the former Barcelona players, but a man who was encouraged to come by Iniesta and Villa themselves. Add former Arsenal winger and World Cup winner Lukas Podolski and you have some serious talent, albeit largely in their twilight years.

You would assume with that calibre of recruit, they would be near the top of the J-League, but no. In late November, when I visit, that’s not the case. In fact today they are the underdogs looking up into the top half of the table enviously at local rivals Cerezo Osaka. As Simon, the ex-pat Liverpool fan behind the bar at the Harbour Tavern, puts it: “They’re good at attracting players, now they need to build a team. At some point they may have to look at the manager.”

Football is a brilliant reason to travel, and the Kobe-Osaka derby day delivers one of those crisp blue skies that drags people out of houses and towards stadia with a sense of optimism. Goals are so much easier to remember when it’s sunny. 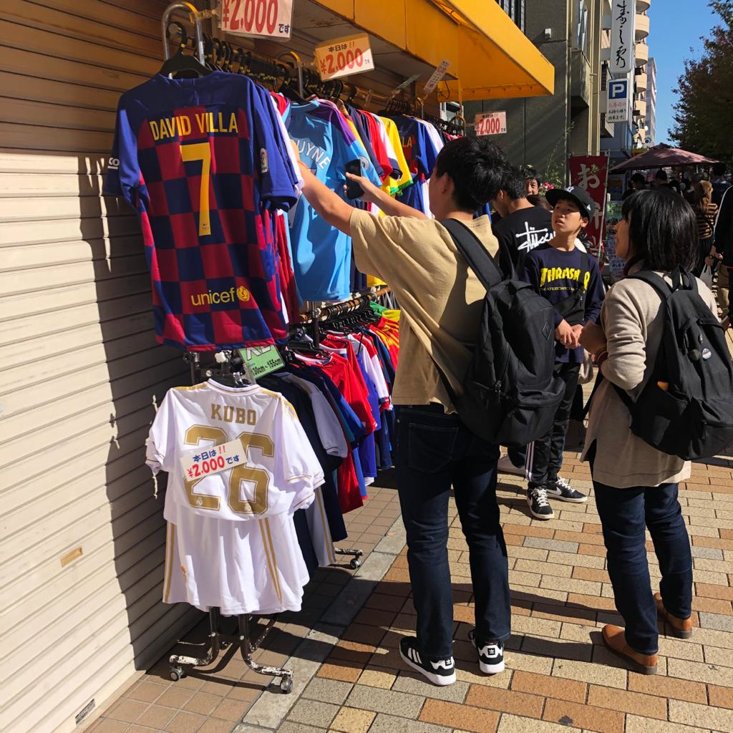 At the main train station they’re selling packs of biscuits with the players’ names and numbers on them. Pennants hang from lampposts with the stars in action on them advertising the game. The tube ride is good-natured, with fans of both clubs mingling without incident or threat.

I follow the crowd out of the underground and down the main road to the stadium, and there’s one football shirt stall selling replicas from all over the world. Next door an elderly man in a Kobe shirt and blue hat stands outside his sushi place and keenly ushers the hungry in for a match-day roll. It’s better food than you get outside Stoke City’s ground, which is possibly the worst offering in Britain. By the Noevir it is very clean and spacious with lots of information tents and good signage. They’ve clearly taken their influence from the Bundesliga, not the UK.

Inside the stadium, even before kick-off, the atmosphere is noticeably buzzy. Behind each end are banks of opposition fans, 99% of them are in replica kit - Osaka are in dark pink, Kobe blood red. It’s like they actually had a fight over the colour chart for the same shade. The back and front walls of the stand in the home end are covered in strong graphic banners for Kobe, emblazoned with their logos and slogans: ‘Keep on fighting in enemy land’ ‘The 11 Stones’ ‘We will follow, Love over land and sea’ ‘Now and forever in the name of Kobe’ ‘Punx de Kobe’ ‘Black lions’. 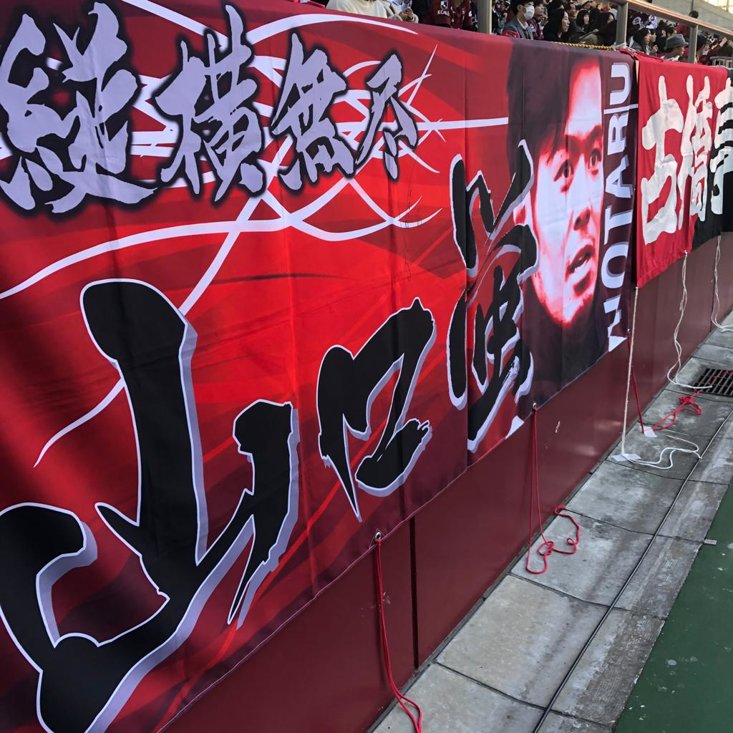 There’s relentless drumming and chanting organised by a guy in blue with a megaphone, but the upbeat, speedy rhythm of the drums means it somehow never grates like the solo drummer does at places like Reading or Sheffield Wednesday. The Kobe fans spend a lot of time perfectly delivering a corrupted version of  The Beatles’ ‘Yellow Submarine’.

Once the game starts the noise never stops once. Seriously. Despite it making for a tremendous atmosphere it gets to the point where you kind of hope it would stop. These are very regimented fans. It’s like being at a Metallica gig with two 45-minute medleys. And it’s echoed back with similar fervour from the away end. F**k knows how the players can hear each other. They let their bodies do the communicating.

Played out beneath the open retractable roof, the game is fast, zippy and exciting. A noticeably higher standard than when I went to see David Villa and Andrea Pirlo at New York City a couple of years back.

Every now and then Iniesta plays a short instant wall pass, or a quarter-length through-pass that pets open the Osaka defence and it’s like watching an artist at work. He looks at his opponent as he receives the ball, moves his foot forward to guide the opponent where to go, and then slips the ball the opposite way to his teammate. We’ve all seen this sort of move many times on TV but to see it in the final days of a great player’s career is something else.

When Kobe go close to scoring, Osaka fans pull out these giant flags on poles as if to ward off evil sprits. It doesn’t work, and Kobe follow in again to coax immense screams of hope and expectation before the Osaka keeper manages to turn the chance away.

The game is settled by Kobe winger Kyogo Furuhashi, who only joined from freshly-relegated FC Gifu in 2018. He executed a great drive in from the wing, turned his defender off balance and fired a long, hard, diagonal shot into the net. The young Japanese players on both side look really fresh and ambitious rather than just reliant on Podolski and co, but the game ends 1-0. Weirdly, lots of them dye their hair blonde to make them look western, the Beckham influence lingers on.

The end of the match is quite ritualistic. Both teams line up in the centre circle and shake hands, and then Kobe go to each corner of the stadium and bow to the stands, waving as they go, much like the last game of the season in the UK. It really makes it feel like the game has been a performance rather than just a sporting event. 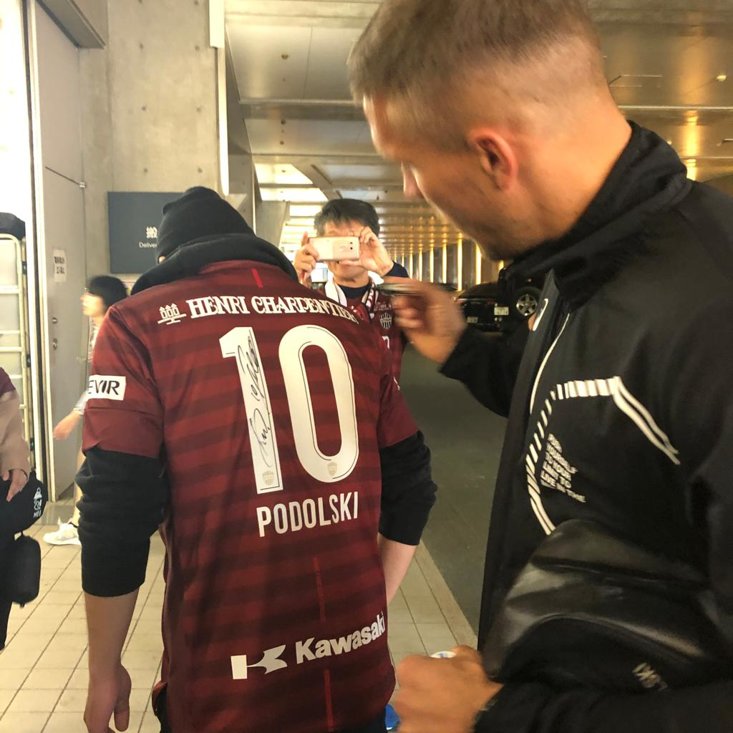 As Kobe reach the home end individual fans hold up banners with photographs of players on and sing to them as the team link arms on the edge of box. Then the fans sing, not chant, to them. Even the Osaka fans clap Kobe off the pitch. The man of the match is singled out and given his award by a giant Transformer with a sponsors D on his chest.

Once the players have gone, the Kobe fans stay behind singing and swaying and jumping in unison. It’s a love hewn from tragedy. And they will happily drive the team on through Christmas to the first day of 2020 when Kobe beat Kashima Antlers 2-0 in the Emperor’s Cup Final, the first game in the new National Stadium built for this year’s Olympics. It is the first silverware won in their history, 25 years on from the earthquake.

Vissel Kobe were right not to give up.