As we are probably all aware after the Christmas break, spending too long around your relatives can be difficult. Working with them, then, must be nigh-on impossible. Greek tennis star Stefanos Tsitsipas stole the headlines for the wrong reasons during his ATP Cup match against Nick Kyrgios on Tuesday as he lost his rag midway through the game.

His temper flared and he took it out on the man closest to him, and unfortunately for him that man was his father.

Tsitsipas took an angry swipe with his racquet and accidentally caught his dad on the arm, leading to a penalty point from the umpire and, perhaps more damaging, a stern telling off from his mother. We’re sure she put him in his place with the classic “I’m not angry, I’m just disappointed" line.

Parents are often a constant in the background of a sportsperson’s career. But sometimes they take the spotlight for themselves, with brilliant results. Below we look at some of the best parental moments in sport.

One of the most touching Olympic moments of all time. Back at the Barcelona Olympics in 1992, Derek Redmond was competing for Team GB in the 400m at the peak of his career. He’d posted the fastest time in the heats and was a serious medal contender as he lined up for the semi-final.

Redmond started well, shooting round the first bend, but on the back straight disaster struck as he snapped his hamstring and fell to the ground in pain. His race and hopes of an Olympic medal were over, but his determination to finish saw him rise back to his feet and hobble along for the next few metres.

Then, heading into the final straight, he was joined on the track by another man, when all the officials were attempting to get him to stop. That man was his father Jim, the man who had been by his side throughout his entire career, holding him up as they made their way slowly towards the finish line.

Derek told awesomestories: “I just said ‘Dad, I want to finish, get me back in the semi-final.’ He said, ‘OK. We started this thing together and now we’ll finish it together.’”

The crowd erupted as they finished, and the image of the pair arm in arm, with Derek in tears, is now one of the most iconic Olympic pictures of all time.

Parents are with you every step of the way, through good and bad. We saw the Redmonds emotionally deal with a devastating defeat, but sometimes the good times produce moments just as spectacular. When Chad Le Clos beat the great Michael Phelps in the 200m at the London 2012 Olympics, BBC Sport managed to get hold of his father, Bert. What followed was one of the most heartwarming interviews you can imagine as he celebrated his son’s Olympic gold.

Le Clos Senior simply could not hide his emotions as he spoke with Sue Barker. “Unbelievable. Unbelievable. I have never been so happy in my life,” he beamed as the proudest dad on the planet.

One of the defining images of the 2019 Champions League final was Liverpool captain Jordan Henderson embracing his father after the final whistle. Having been part of the side which lost the 2018 final to Real Madrid, Henderson finally got his hands on the trophy 12 months later.

But despite the success, it was a moment post-match between Henderson and his father that pulled on the heartstrings of Liverpool fans and neutrals alike. Brian had been suffering from throat cancer for the majority of the decade but had since been given the all-clear and was there to see his son win the most prestigious trophy in club football.

Even the staunchest of anti-Liverpool onlookers will have had a tear in the eye. What a moment. 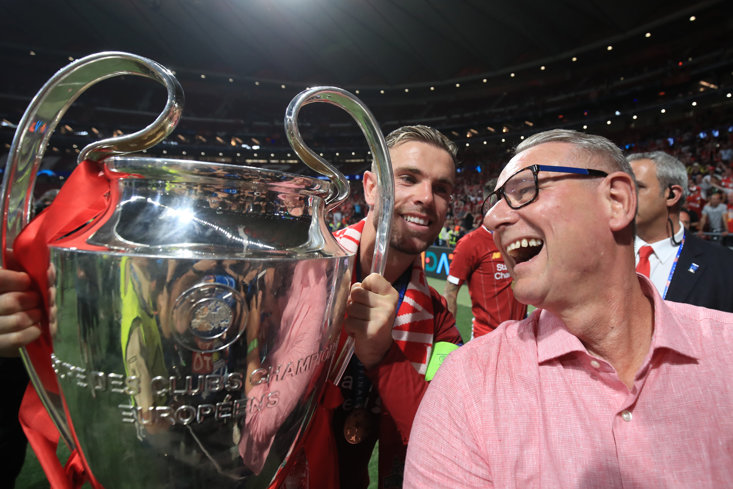 The thing with the Eubanks is that there is not one particular moment that Chris Eubank Sr has overshadowed his son. It has just been his entire career in which he has hilariously taken the spotlight in almost everything he has done.

As Junior tried to establish himself as a boxer in his own right, Senior was always behind him in the corner, or making it all about him with his now-famous interviews. On Gogglebox, the pair showed a lighter side to their relationship which did show the closeness between the pair which was touching.

Like Dick without Dom, Eubank Jr getting screen time with no sign of his dad lurking in the background just looks wrong.

Austin Rivers became the first player in NBA history to play for his father, coach Doc Rivers of the LA Clippers, in January 2015. More recently, Doc was berating a referee in a game between his Clippers side and his son's Houston Rockets in November 2019 when Austin called for a technical foul on his own dad and got him ejected from the game and sent back to the dressing room.

Although this particular clip may not show it, the pair do share an incredibly close relationship, on and off the court.