Sports
Features
In May 1997, the world chess champion was the first to be defeated by a supercomputer in a competitive match.
Jack Porter
12:48, 01 May 2020

There are more possible variations of chess games than there are atoms in the observable universe and the complexity of the battling board game has inspired some of the greatest minds, including José Raúl Capablanca, Bobby Fischer and Alexander Alekhine.

And in May 1997, artificial intelligence joined those illustrious ranks.

Taiwanese-American computer scientist Feng-hsiung Hsu - nicknamed ‘Crazy Bird’ - began the foundations of what would ultimately be the first computer chess champion whilst he was in college, studying at Carnegie Mellon University in Pittsburgh, Pennsylvania.

Hsu joined IBM in 1989 and with a core team of like-minded engineers and scientists, eventually created ‘Deep Blue’, the technology that would later shock the world and reign supreme in chess.

In conversation with the BBC, Murray Campbell of the IBM Thomas J. Watson Research Center, outlined the mission’s aim, “We were trying to prove that it was possible to build a chess machine that could beat the best human player in the world.”

That player was Garry Kasparov, the “Beast of Baku'', who was world champion from 1985 to 2000.  The Russian grandmaster was born in the capital of what was then the Azerbaijan Soviet Socialist Republic, in 1963. Kasparov started playing chess aged six, by 13 he was Soviet champion, aged 16 he won his first international tournament, then in 1985, at 22 years old, became the youngest world chess champion by defeating Anatoly Karpov. Throughout his entire professional career, Kasparov was numero uno for 225 out of 228 months.

He was, quite simply, the genius chess-playing paragon, the best the human race had to offer.

Thanks to Hsu, IBM, and Deep Blue, Kasparov would also later have the dubious honour of becoming the first world chess champion to be defeated by a supercomputer in a competitive match. 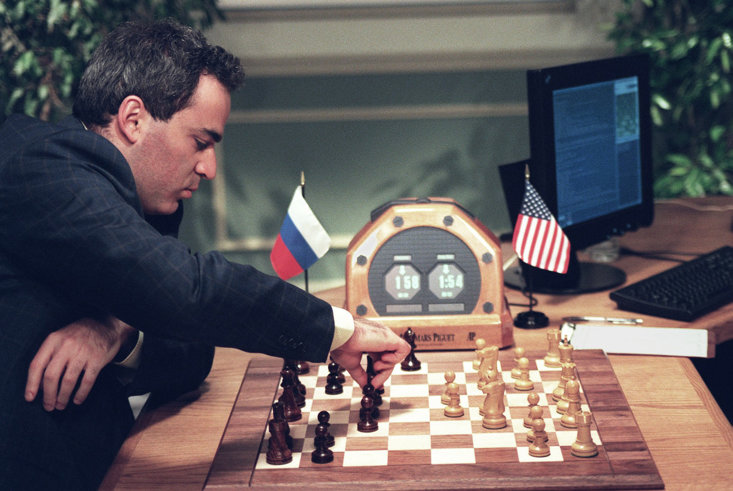 Deep Blue was a huge Kubrickian monolithic machine which had taken inspiration from Douglas Adams’ fictional computer in The Hitchhiker’s Guide to the Galaxy which spent 7.5million years calculating ‘the Answer to The Ultimate Question of Life, the Universe, and Everything’ (Spoiler: the answer is 42). Indeed, the original system Hsu created was called ‘Deep Thought’ named after Adams’ creation.

In 1996, with Hsu the one to represent his project, Deep Blue faced off against Kasparov in a heavyweight clash in New York. Kasparov had already played Deep Thought seven years earlier and won comfortably. Kasparov was used to challenges from upstart tech teams, and few - if any - had caused sizeable problems for the champ.

“At that point, you are the operator, so everything is beyond you,” recalled Hsu to NBC. “You don’t want to show anything emotional to Kasparov, so that he has nothing to read.”

The first game of the match produced its own shock, when the supercomputer forced Kasparov to
to resign after thirty-seven moves. It had been the first time in chess history that a reigning world champion ever lost against a computer with tournament conditions and time controls.
Kasparov eventually won the battle 4-2.

One year later Deep Blue returned with a vengeance. The interim between matches had allowed the IBM team led by Hsu to double the computer’s processing power, and on May 11, 1997, in New York history was made.

Once again, within the chess community, Kasparov was widely expected to win, and win comfortably. He was unrivalled, unparalleled and the technology to beat a human mind at the game was widely thought to be decades away.

Entering the sixth game the match was tied at two-and-a-half each, to both Kasparov and Deep Blue.
Kasparov had won the first game, but had been stunned by the computer in game two after Deep Blue had produced what Kasparov deemed ‘a human-like’ move, to combat a tactical “poisoned” pawn instigating. Unable to comprehend the defeat, Kasparov was unable to beat Deep Blue and drew the following three games.

Game six, and the match, and history was decided on just move eight. Deep Blue stunned the grandmaster by sacrificing his own knight. Kasparov failed to take the knight immediately, which proved to be a fatal choice. In 19 moves, Kasparov resigned and the tournament.

Kasparov knew he had been outthought, outwitted, and outmaneuvered. The pressure of him being the pinnacle of chess was obvious. All the Russian could do after resigning from just 19 moves was hold his head in his hands, then raise his arms up in surrender and walk bemusedly over to his mother watching on.

It had been the largest coverage for a chess match ever seen in the history of the sport, and indeed will ever be likely to be seen. For the first time in history, a computer had beaten a world champion in tournament conditions, with standard time controls. That legendary move eight in Game Six has now been adopted in all modern computer chess programs.

“The rematch in 1997 was a watershed moment,” Kasparov recalled to FICO in 2018, “Machine was capable of winning a normal, classical chess game against a current world champion.

“The irony is that, contrary to the expectations of the founding fathers of computer science - Alan Turing, Claude Shannon, Norbert Wiener - the machine that succeeded in defeating a world champion was not a machine that as they expected would not be emulating human mind. It was brute force.

“I’m almost resisting Deep Blue being called an intelligent machine. It was as intelligent as an alarm clock, but it was very fast.”