The Rugby World Cup gets underway this Friday, taking place in Asia for the first time in its 32-year history. A total of 19 teams venture to Japan to join the host nation, with the tournament running until November 2.

The curtain raiser sees Japan take on debutants Russia at the Tokyo Stadium, in the nation’s capital.

There are 12 venues, stretching as far north as the Sapporo Dome on the island of Hokkaido, down to the Kumamoto Stadium on Kyushu.

The 20 teams are divided into four separate pools of five, each nation in the respective pool facing each other once. Four quarter-finals of match-ups from the winners and runners-up from each pool then take place across the weekend of the 19 and 20 October, with semi-finals taking place the following week for the final four.

The final will be on Saturday, November 2 at the International Stadium (also known as the Nissan Stadium), Yokohama.

But what about beyond the rugby, when the games are done?

Japan is of course regarded as a cultural cacophony, recognisable but still brilliantly alien; a salmagundi of styles, from the neo-tech visible from a Tokyo skyline to the traditions of temples and teahouses identifiable in a place such as Kyoto.

Notable celebrities include the astronomically successful band Glay (who can proudly boast to have held the second-highest attended concert of all time), the famous Japanese film director Takeski Miike, and Issei Sagawa, a former food critic who once killed and ate a woman.

Japan has as many Michelin-starred restaurants as the entire top 10 countries on the prestigious list; three cities from Japan make up the top five; Osaka, Kyoto, and Tokyo topping the list. The capital actually has an astonishing 230 Michelin starred-restaurants.

It is literally the culinary capital of the world.

And there is actual science for the popularity of the country’s cuisine, the aesthetically pleasing Japanese cooking - or ‘washoku’ - works on the basis of the “rules of five, in order to emphasize variety and balance”.

According to Culture Trip, “this is achieved through the use of five colors (black, white, red, yellow, and green), five cooking techniques (raw food, grilling, steaming, boiling, and frying), and five flavours (sweet, spicy, salty, sour, and bitter). These principles can be found even in a single meal of one soup and three sides paired with rice, 一汁三菜 (ichiju-ju, san-sai).”

It’s not all high-priced high cuisine however, staple recognisable dishes of rice, ramen, udon, and soba, with opportunities to feast at franchises with the pop-up Pokemon cafes, Robot food service, and even a Resident Evil restaurant.

If you fancy staying around after the tournament’s end, the Christmas holiday tradition is eating KFC. 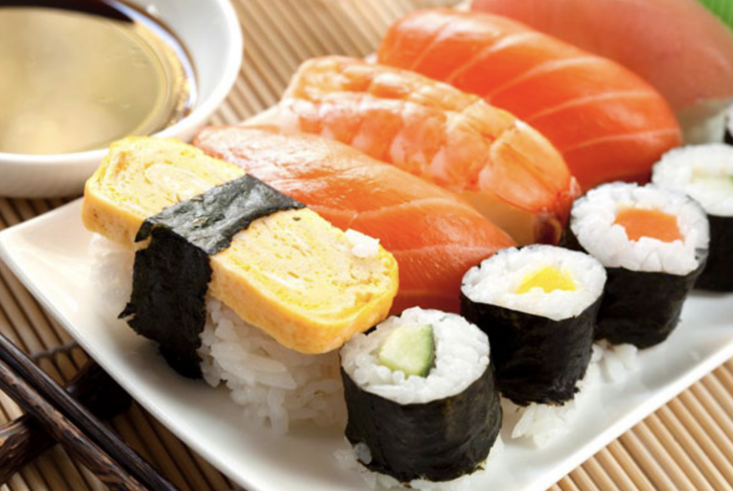 Transport/ How to get around

So it’s all about the famous high-speed train right? Wrong! Though the Bullet-train ‘Shinkansen’ privileges travellers to such journeys as the 450km Kyoto-Tokyo route in just two hours, those with tighter purses can find their way around the country quite easily by bus. In the major cities, however, the convenience of subway systems makes journeys by this particular mode of transport all but obsolete. Most subway systems in Japan begin service at around 5am, with last trains until midnight. With lack of regularity night-buses, taxis are the method for the night-owl. Appropriately eye-catchingly decorated budget air travel will also be welcome to those stadium-hopping throughout the tournament.

What are you going to pack? Or more appropriately, what are you going to need to pack? The Rugby World Cup is being held from mid-September through to October. Unfortunately, this is generally when it’s the darkest and wettest, so make space for those brollies. In Tokyo, you’re only likely to experience around four hours of sunshine a day! Most notably, however, September is peak typhoon season, with the east coast being hit the hardest. More extreme, a tremor occurs somewhere across Japan at least every five minutes, and each year there are up to 2,000 earthquakes that can be felt by people.

Get your singing voices ready as Karaoke is really ‘the thing’; choose whether you are a ‘Maximum The Hormone’ or ‘Stereopony’ type of person. All will become clear in time, fear not. There’s a gluttony of bars and nightclubs in the main cities across Japan, well actually more than a gluttony, over 80,000 to be precise. Tokyo has 25,000 alone, most requiring you to pay an entry fee. By law, clubs are supposed to shut around midnight - most will stay open until 7am. 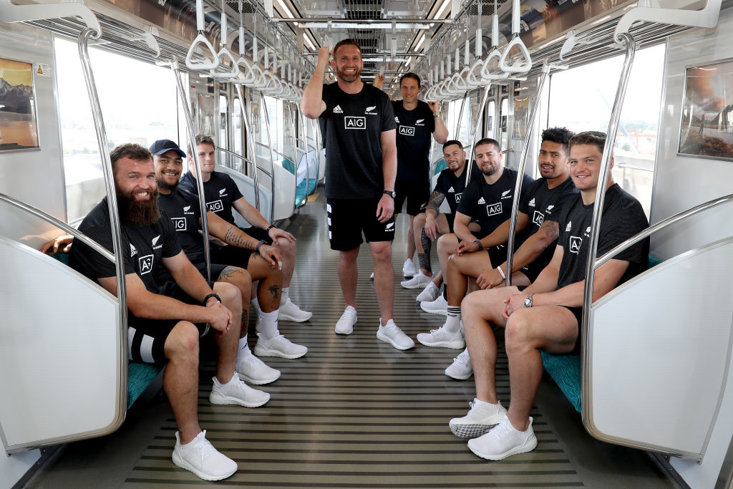 Liam Coltman, Ofa Tuungafasi, Matt Todd, Kieran Read, Ben Smith, Sonny Bill Williams, Dane Coles, Ardie Savea and Scott Barrett of the All Blacks host Japanese media on a train to the launch of the New Zealand Says 39 campaign in Kashiwanoha, Japan. In Japanese, ‘39’ means ‘San Kyu’ and on behalf of New Zealand we say ‘Thank You’ for hosting us.

Punctuality is a must, of course, getting to your game on time is entirely your prerogative.

If you enter a lift/ elevator first, you’re in charge of that elevator, ‘captaining up’ to the different floors based on where the rest of your ‘passengers’ want to venture, and you’re of course required to hold the door open.

If you’re interested in making friends, take a stack of business cards. When approaching the exchange, offer your personal business card with both hands - if you believe yourself to have a lower rank than the other person, it must be provided lower than the person you’re presenting it to. Receiving, allow it to be placed on your card holder (make a note: buy a card holder) and take time to study it.

Most ventures indoors will require you to take off your shoes, and there are even special slippers to wear to go to the bathroom.

And remember, always, always bow. And clean up after yourself.

If you feel like making your trip a little bit more permanent, it’ll probably do wonders for your health,  the world’s oldest man and woman reside there. Plus it’s got a seriously low crime rate (fifth in the world, behind Switzerland, New Zealand, Norway, and Austria).

But remember, if you’re using chopsticks, don’t cross them on the table - it represents death. Sticking them upright in a bowl of rice is also only done at a funeral, which hopefully you won’t be experiencing doing the Rugby World Cup.

The Lonely Planet quite rightly deemed Japan a ‘cultural galapagos’; a beautifully eclectic mix of traditions and tastes. Get your Yen and your Zen ready, you lucky rugby fan you! 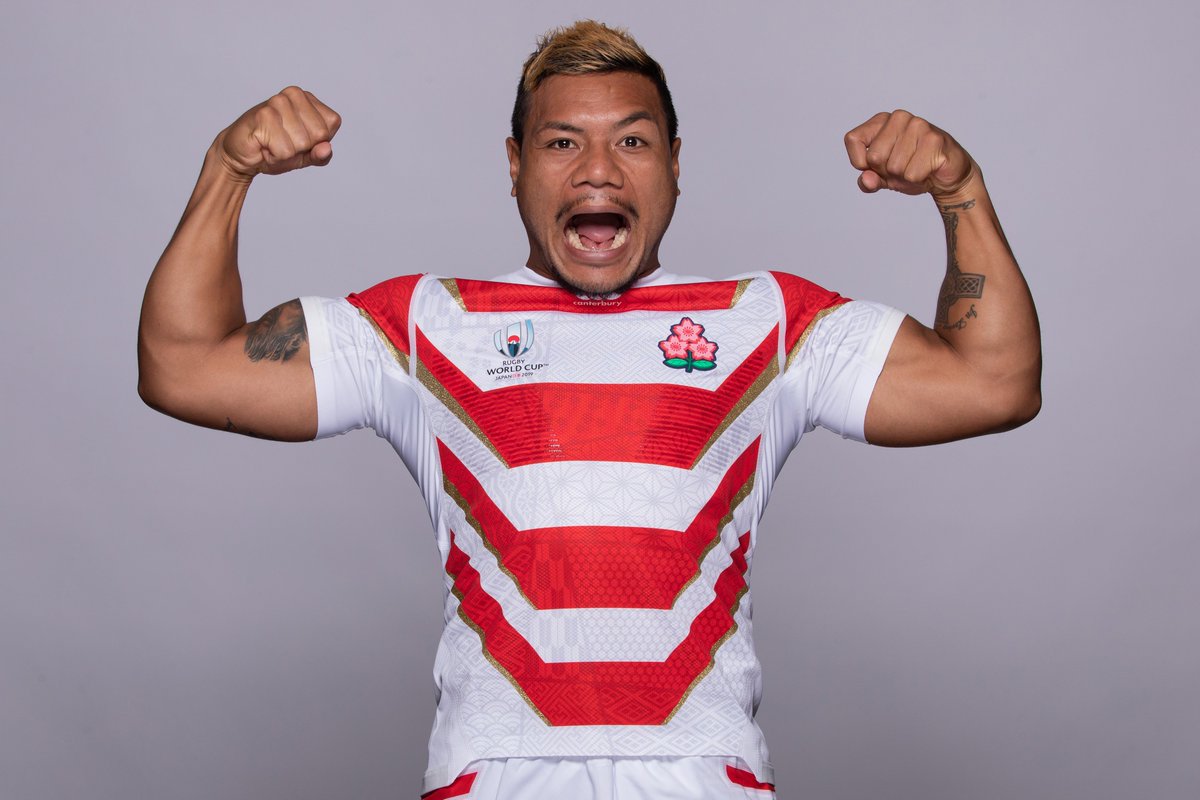