Images of Jurgen Klopp around Anfield fill Liverpool fans with immense pride, everyone enjoying the glorious ride the German is taking them on.

From European Cup glory to a possible Premier League title having won every game so far this season, the Reds are loving every minute.

There is an illustration in L4 which makes one Liverpool supporter beam more than most, though, for it’s his own creation.

John Culshaw was commissioned to paint a mural of the infectious coach on the side of the popular bar ‘Klopp’s Boot Room’ and it looks amazing.

“It’s fantastic, I love it. It sounds stupid saying it but I’m really proud of it,” he says with a massive grin when The Sportsman catches up with him in St Helens as he works on his latest project at a local gym.

“If I’m in the car with one of my mates and driving through Anfield I’ll always go that way and I say ‘Have you seen that there?’” he jokes.

“The responses have been through the roof! I’ve been inundated with requests and people wanting work so I’m made up.

“I’ve even been getting recognised. I bump into other artists and get chatting and they’ll say ‘Oh, are you John Culshaw?’ It’s weird for me to be recognised by anyone!”

What makes this even more special, however, is that Culshaw produced the stunning artwork with just one arm.

Having suffered catastrophic injuries as a youngster following a road accident, losing one of his limbs, it hasn’t stopped him carving a career as a painter.

“It was when I was nine, I was out with my mates,” he says. “My cousin and I were crossing the road on our bike and a car came bombing down and he hit both of us.

“I lost my arm. Both my arms and both legs, broke every bone in my body and this arm just never got better.

“It’s nerve damage in this arm,” he says, reaching to his right shoulder with his left hand, “That’s gone now.”

Battling back from such a terrible accident, he always had a creative talent but admits his latest venture has somewhat come out of the blue. Only two months ago, Culshaw was still a painter and decorator.

“I’ve fallen into it really,” he admits. “I always thought it would be great but just never dreamed that it could be a thing. I just never knew it was a job, I thought I’d have to be a painter or a builder or something.

“I’ve always enjoyed drawing, as a kid I used to love it. I started decorating and then, when I painted my little boy’s room with Spider-Man for him, a couple of people saw it and asked ‘Can you do ours?’ so I was doing friends houses and stuff.” 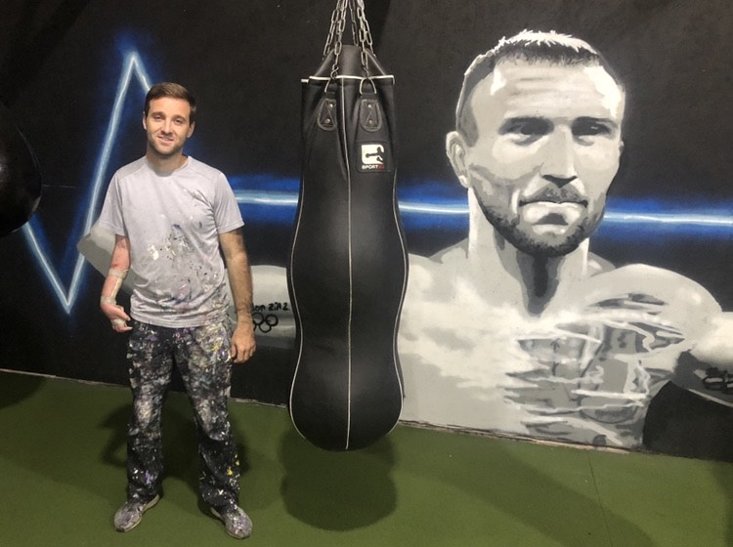 From there, it’s spiralled. Spiralled to the point that his work has even caught the eye of one Liverpool legend in particular, much to Culshaw’s delight.

“My friend is a barber in Huyton and he had an idea to have Steven Gerrard and [former Everton midfielder] Peter Reid, red and blue, on the side of the shop, as they are both from there,” he explained.

“I was made up with that,” Culshaw beams again, clearly loving how far his work is reaching right now, “For him to give me a little thumbs up…”

While he idolises Gerrard, Klopp also got a special mention: “I love him too, he’s the best thing to happen to Liverpool that I can remember in my lifetime. He’s brilliant!”

Now living his dream, painting his heroes around the city he calls home, Culshaw believes his accident may have actually aided his passion in some ways.

“I was right-handed, so I had to learn with my left hand from scratch.” he reveals. “I do think it’s improved my skills because I have to think ahead more than other people.

“Like, when I approach a door to open it, I have to think ahead. Now, as an artist, that process is already in my brain.”

Now looking to take things to the next level, he has ambitious plans and isn’t at all afraid to push himself forward and get his name out there, even fibbing at first, or at least bending the truth.

“There was a lot of graffiti down the side of a building and the company wanted it covering. They put a letter out saying does anyone know any graffiti artists?

“I’d never done it before but I said ‘Yeah, I’m a graffiti artist!’” he laughs, putting his hand in the air. “I just threw my name in the hat. I’ve got to be the guy who says: ‘Yeah, I can do that.’

“They asked me to do some designs, they liked it and it went really well. I got a little bug for it then… It’s really difficult to get a space and a lot of artists will go down certain avenues but I’ll just go straight to the door now.”

With such a giant painting, how does he pull it off with such great detail?

‘It’s just spray cans, it’s layers. I do think anyone could learn it,’ he says modestly. “I grid it all out on my ipad and then go grid by grid. I’ve not been doing it long and every job is new but the Klopp one I was daunted by.

“I’d never done that sort of photo, you know, realistic. But I thought ‘I’ll have a go here’ and it came out really well. I was happy with it.”

As we chat with him, he’s in the middle of bringing Peak Fitness Gym to life with a series of boxing murals, his favourite sport, and he’s glad Scouse artists are expressing themselves in the north west.

“Liverpool is going through a big boom in street art at the minute,” he tells us. “It’s massive in Manchester and there are so many big artists in Liverpool.

“We’re realising we can do it here, the public are starting to enjoy it - rather than seeing it as graffiti or vandalism, it’s art.”

So, does he want to be the next big artist?

“I’d love it, I’m trying to not say it to anybody and not jinx myself but I’d love to.” he says humbly before an excited smile cracks through.

“My ambition is, through the big jobs, to do my own work. I’d love someone to say ‘I like your work, will you put some of your work on my building?’ That’s where I’m aiming.”

Big plans, but another Banksy he ain’t.

“I think he’s great but he’s very political. I just do it because I enjoy it, I want to do something I enjoy for my work.

“I need as much exposure as I can! I’m the opposite of Banksy!”