The power of sports is undeniable. Yet the influence of a great sportsperson is immeasurable. The tragic death of Kobe Bryant has sent a ripple effect of unexpected emotion around the world, highlighting the significance of his 20-year NBA playing career for the storied Los Angeles Lakers franchise, and what a global icon he became in the process.

The 41-year-old father of four died in a helicopter crash in California on Sunday along with his 13-year-old daughter Gianna. It's not just an immense loss for the basketball community, it's a loss for the progressive ideology of a man who thought anything is possible with a little hard work.

His work ethic, celebrity and success transcended racial, cultural and gender barriers usually inaccessible for other sports stars. You'll have seen all the dedications about Kobe pouring in over the last couple of days from well-known figures in TV, fashion, music or even politics. You don’t have to be a basketball fan for your feed or trending tab to have been telling you who he is. The images of Kobe and Gigi posing together with smiles on their faces aren’t aligned with the captions below that list the grief of its senders.

Former NBA superstar Dwyane Wade, 38, posted several videos on his Instagram page opening up about his loss. “Today is one of the saddest days in my lifetime,” Wade said. The NBA's all-time leading scorer, Kareem Abdul-Jabbar, added: "It's very difficult for me to put in words how I feel. Kobe was an incredible family man, he loved his wife and daughters, he was an incredible athlete, he inspired a whole generation. This loss is hard to comprehend."

Barack Obama wrote on Twitter: "Kobe was a legend on the court and just getting started in what would have been just as meaningful a second act. To lose Gianna is even more heartbreaking to us as parents. Michelle and I send love and prayers to Vanessa and the entire Bryant family on an unthinkable day."

The timing of Kobe’s death has dictated these immediate and sad responses from online users and public figures alike. He had barely retired from the game of basketball, and hadn’t fully put his stamp down on his business, entertainment and sporting ventures inside and away from the game.

Barack Obama
@BarackObama
Kobe was a legend on the court and just getting started in what would have been just as meaningful a second act. To lose Gianna is even more heartbreaking to us as parents. Michelle and I send love and prayers to Vanessa and the entire Bryant family on an unthinkable day.
682691
4049118

Like the great Michael Jordan, Kobe's popularity soared the further his brand took him, whether it be nationally or internationally. In far Eastern places like China, Taiwan and the Philippines, Kobe was always the main attraction, inspiring a generation of young players at his basketball camps and events. The Taiwan president Tsai Ing-wen tweeted that her "thoughts go out to the Bryant family & the families of all those who lost loved ones today."

His affinity with Chinese fans was rivalled only by that of Yao Ming, the seven-footer who played in the NBA, LeBron James and Michael Jordan. At a 2013 Lakers preseason game against the Golden State Warriors in Beijing, the arena rang out with chants of "Kobe! Kobe!" despite the man himself being injured and not even suiting up for the game.

It’s no secret that he could speak Spanish and Italian fluently, and he lived in Italy between the ages of six and 13 while his father, Joe Bryant, played for several teams in the country before Kobe returned to Pennsylvania for high school.

"He spoke Italian very well. He even knew the local slang," Italian basketball federation president Giovanni Petrucci told The Associated Press. “He's particularly important to us because he knew Italy so well, having lived in several cities here.”

Back in the States, he was reserved growing up, feeling a little different from other boys due to his experiences in Italy. He would use basketball as a way to connect with others, but also as an avenue to unleash his knowledge of the game. It was the start of his unmatched work ethic and he’d play one-on-one with kids, first one up to 100 points wins, where normal games would be up to 21. He would get up early at 5.30am and practice daily to hone his skills so he could shine on the court, where everybody would know his name after a breakaway jam or a fall-away three pointer.

Joining the NBA straight from high school, it was a unique transition, where many of the players were older and Kobe was too young to head to the bars and have drinks. This meant Kobe would decline invitations and focus on the game instead, by watching film and practising some more. 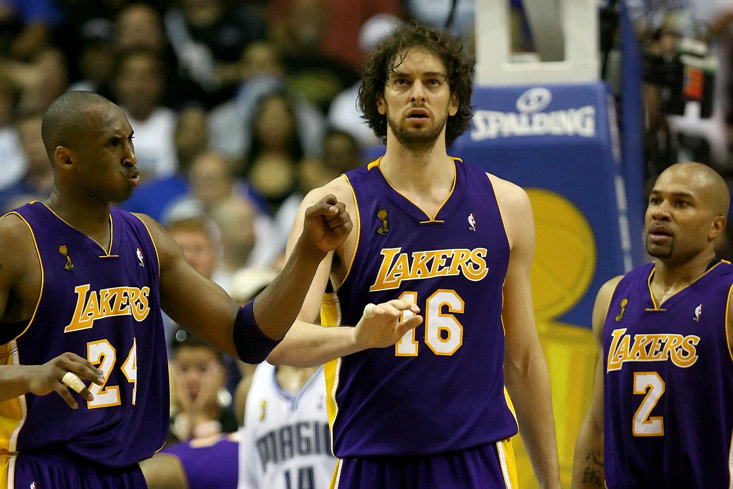 As he got older and the rotation of teammates filtered his playing career, only a few would get to know the real Kobe - and he once listed Caron Butler, Pau Gasol, Derek Fisher and Ronnie Turiaf as his close friends. He would share thoughtful discussions about the game and would establish a bond beyond the court with them, developing the soon-to-be recognised mantra, ‘The Mamba Mentality’. He described it as: “If you see me in a fight with a bear, pray for the bear.” His obsession with discipline, winning and his large personality made him one of the most polarising players of his time.

Nike would partner with him to launch a youth basketball league in Los Angeles called the Mamba League, and Kobe would give hundreds of kids free access to the sport, creating the Mamba Sports Academy to provide athletic and lifestyle training to competitors at all levels in a wide range of sports.

The experience of fatherhood played a big role in Kobe’s maturity as a person and with his daughters, Gianna, Natalia, Bianca and Capri by his side, Kobe routinely visited the WNBA’s Los Angeles Sparks as an informal advisor and worked with other women at all levels of basketball.

Kobe would diversify his career by breaking into the investments world even before leaving the NBA. In 2013, he co-founded venture capital firm Bryant Stibel & Co. along with Web.com founder Jeff Stibel. The firm now has more than $2 billion in assets, with investments in dozens of technology, media and data companies.

"You've got to have strong entrepreneurs, that's really the key for us is looking at the people," Kobe said in an interview with CNBC last year. "Yes, it's important to see those returns, right? But it's also important to have great opportunities, great relationships with our investors, great opportunities with our entrepreneurs to help them grow and put them in situations where they can be successful."

Bryant finished his playing career as the Lakers' all-time leading points scorer, and is fourth on the NBA's all-time list with 33,643 points. He is, and always will be, sorely missed.