On November 14 2012, England played Sweden in an international friendly in Stockholm. It was a game which would become memorable for Zlatan Ibrahimovic’s Puskas Award-winning bicycle kick over the helpless Joe Hart in a 4-2 win against the Three Lions.

Headline-dominating Zlatan was at it again.

But the same match provided one Raheem Sterling with his first international cap at the age of just 17, with the Liverpool attacker playing 85 minutes on the right wing in Roy Hodgson’s set-up.

Almost seven years later, Sterling knows a thing or two about stealing the front and back pages.

It can be easy to overlook the fact that this is a footballer still in his early 20s. He is an England stalwart, a fundamental cog in the Manchester City machine and now, arguably most importantly, an icon to be revered by the next generation of footballers.

“English football does not often produce this kind of player,” proclaimed Guardian journalist Barney Ronay at the tail end of 2014. Sterling was still eight months away from exiting his teens.

How right Ronay was.

That same year, Sterling was awarded the Golden Boy trophy as Europe’s Best Under-21s player, and to say he has gone from strength to strength would be an understatement.

He has become every bit as much a boundary-traversing presence away from the pitch as he is a visually thrilling presence on it. The reverence younger players have for him became even more apparent this week as Sterling prepares to make his 54th England appearance.

Advice from a genuine world-beater, who has been there and done that, has been priceless for the new wave of youngsters adorning the Three Lions shirt.

“Raheem tells me to keep working hard, tells me how to get the goals, how to get the assists,” his England teammate and 18-year-old Chelsea starlet Callum Hudson-Odoi said in a pre-match press conference ahead of meetings with the Czech Republic and Bulgaria.

“He'll tell me what are the best movements to get in the box when the balls are coming in, what is the best position to pick up possession.

“He obviously plays for a different team, so he doesn't have to do that, but he does because he wants everyone to do well.

For a person like that to help you, it's an amazing feeling. He gives you the best advice possible.

“I ask him: ‘How do you get all the goals you are getting, how do you work for the team, how do you make an impact in big games?’" 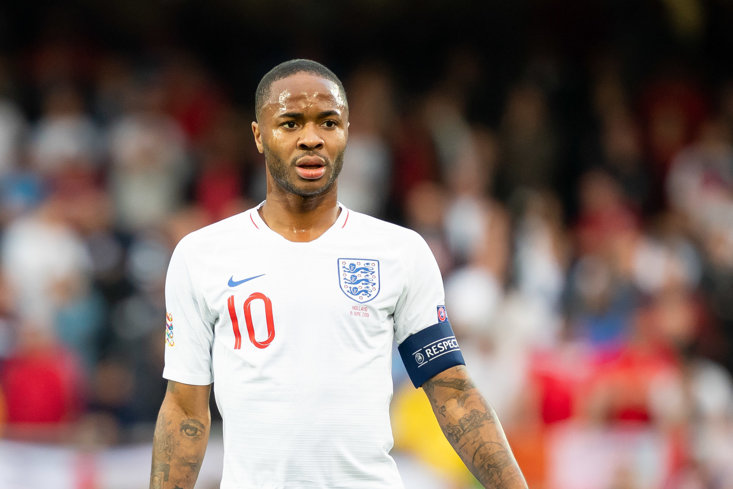 At Liverpool, Sterling won back-to-back Young Player of the Year awards and, in an exciting triptych alongside Luis Suarez and Daniel Sturridge, narrowly missed out on the Premier League title to the team he would eventually join, Manchester City.

However, an early, memorable excerpt from the documentary ‘Being: Liverpool’ circulated of Sterling being scolded by the club’s then-manager Brendan Rodgers on the training pitch in his breakout season with the Reds. It helped cast early doubts about his character.

Rodgers also criticised the player for purportedly taking nitrous oxide and being observed smoking a shisha pipe in his leisure time. And since then, he has been subjected to regular criticism about his personal life, including the inking of a gun tattoo on his lower leg in tribute to his father and buying a £15,000 guard dog.

His £49 million move from Merseyside to Manchester in 2015 was treated with scorn and cynicism, with particular attention on the new £100,000 weekly salary he would be granted. Liverpool legend Steven Gerrard expressed his disappointment in the player for his flirtation with City, though the Reds had reportedly offered him a similar contract. In Manchester, Sterling has consistently defied critics, evolving and developing on both a personal and professional level.

At City, his improved scoring proficiency has seen him finish second in the scoring charts behind the club’s all-time top marksman, Sergio Aguero, for the past three seasons, passing a century of goals at club level along the way.

Each new interview conducted seems to involve him not just being encouraged to discuss his on-pitch artistry, but also his being targeting for tabloid fodder and issues of race.

In December 2018, Sterling stated his belief that newspapers helped "fuel racism", with the Black Collective of Media in Sport thanking him for raising the issue of how the media portrays black footballers and communities across the country.

Has Sterling’s voice allowed others to speak louder? We can't say for definite but what's clear is that his unabashed vocality is welcome and needed.

This week Liverpool’s Trent Alexander-Arnold and Chelsea forward Tammy Abraham have been forthright in their intended responses to potential incidents of racism, no doubt emboldened by Sterling's stance on the issue.

Sterling captained the Three Lions against the Netherlands for the first time on June 7 of this year, at the age of just 24. It was a special night, marking his 50th international cap, but how many think this will only be a one-off?

As Sterling continues to show maturity and a selflessness to mentor younger players in Gareth Southgate's set-up, he's stating his case to be a future captain of England. Leading from the front, on and off the pitch.

England
@England
Lovely touch, @sterling7 👏
11120
73142
More
football
The Spurs Player Who Swapped Boots For Battle Long Before Son...
Tottenham Hotspur have this week announced that the unfortunate postponement of the football season [ ... ]
football
On This Day: A 17-Year-Old Alan Shearer Announces Himself To...
On April 8, 1988, a relatively unknown and somewhat scrawny teenager by the name of Alan Shearer, opened [ ... ]
motorsport
From Senna to Schumacher - The Five F1 Families That Changed...
On 31 March 2001, at Interlagos, Ferrari driver Michael Schumacher recorded his seventh consecutive [ ... ]
motorsport
René Dreyfus: The Motorsport Maverick Who Defied The Nazis On...
“There are only three sports: bullfighting, mountaineering, and motor racing; all the rest are [ ... ]
sports
From Boxing To Baseball, These Sport Films Are Your Lockdown...
The silver-lining of a lockdown is that it gives us a little bit of time to imbibe all [ ... ]
football
''The Quality Of Madness'' - Presenting Marcelo Bielsa, Leeds...
When Leeds United sacked Paul Heckingbottom as head coach after only four months in charge at the end [ ... ]
boxing
From Tapia To Tyson: When Blood And Tears Stain The Boxing Tapestry
“Of all the skills a boxer has to master, none is as mystifying as pain management,” sports [ ... ]
football
Rushie To Everton And Diego Dates Madonna - The Best Footballing...
It was the equivalent of Virgil van Dijk appearing on the front cover of FourFourTwo in a Manchester [ ... ]
motorsport
Thank You, Thierry Sabine - The Dakar Rally Is One Of Sport's...
In 1977, cinemagoers first experienced the now-iconic image of Luke Skywalker staring out over the Tatooine [ ... ]
boxing
''Most Notorious African-American on Earth,'' The Life And Times...
What do Alan Turing, The Doors frontman Jim Morrison and the comedian Lenny Bruce have in common? These [ ... ]
rugby
Alexander Obolensky - Exiled Russian Prince, Fighter Pilot,...
Exiled Russian prince, fighter pilot, and a rugby international who once scored 17 tries in a single [ ... ]
rugby
After 50 England Caps Amy Cokayne Finally Embraces Life As A...
Amy Cokayne is 23 years old and already has 50 caps for England and a Rugby World Cup final behind her. [ ... ]
mma
How Dana White Used 20 Million Instagram Followers To Take On...
When Polish fighter Joanna Jedrzejczyk went to war (and lost) with China’s Weili Zhang in the [ ... ]
sports
Prince, Tyson Fury, Jose Mourinho - Sport's Greatest Ever Press...
It is strange how quickly new trends become traditions. Every afternoon at 5pm, when most people used [ ... ]
sports
Donors, Helpers, Providers - The Sports Stars Stepping Up To...
In times of crisis, there really is something to be gained from looking around at all the good that [ ... ]
football
Speaking The Same Language As Carlo And Jose - The Life Of A...
“What do you do in the bedroom?” “I sleep with your wife.” The life of a football [ ... ]
sports
'Quarantini' Anyone? How To Stay Healthy In Mind And Body At...
Keep those spirits up, dear reader! For many of us, being confined to our homes for the foreseeable [ ... ]
football
Exclusive Leon Osman Interview:The Rooney Explosion And Ancelotti...
Leon Osman couldn’t believe what he was seeing. The Everton midfielder had heard about a young [ ... ]
mma
''A Warrior Poet...Beautiful Man'' UFC Legend Frank Mir Shares...
Former UFC heavyweight champion Frank Mir has told The Sportsman of his admiration for WBC world boxing [ ... ]
boxing
54 Years In The Game, 400 World Title Fights, Bob Arum Is Still...
1966 is a special year in sport for a plethora of reasons.  It was the year the England football [ ... ]
football
'' I Believe In Fairies'' - The Life And Times Of The Extraordinary...
Brian Clough wasn’t just one of the most quotable managers in English football’s long history, [ ... ]
sports
Retired Jersey Numbers: When Sports Stars Become Immortal
Basketball creates universal icons who transcend the sport itself. Over the past three decades or so, [ ... ]
football
From Jules Rimet To The FA Cup, The Sporting Trophies That Went...
When the World Cup trophy was stolen in London on 20 March 1966, it threatened to plunge the most famous [ ... ]
motorsport
On The Ground In Australia As Coronavirus Threw F1 Into Chaos
The beginning of a season is normally a time of high excitement as we wait to see which teams have hit [ ... ]
football
'Wizard Of Dribble' Sir Stanley Matthews Was The First Gentleman...
Sir Stanley Matthews was no ordinary footballer. His was a career which spanned some three decades, [ ... ]
winter-sports
From Wheelchair To World Title, The Amazing Katie Ormerod
Katie Ormerod is at her family home in West Yorkshire, fresh from the news that she has just become [ ... ]
football
''It Will Always Niggle'' - Leon Osman Reveals Hurt At How His...
Leon Osman has told The Sportsman of the hurt that still lingers as a result of finding out by text [ ... ]
football
The Man Behind The FA Cup: How Charles Alcock Made A Modern...
There might never have been a more significant game of football than the one played at The Oval on 16 [ ... ]
boxing
The Mike Tyson Interview: ''Living Takes A Lot Of Courage.''
Mike Tyson’s life has been a well-documented roller coaster ride. A difficult childhood, then [ ... ]
football
60 Years In Football, Sacked 37 Times...There Really Is Only...
When it comes to jobs for life, Barry Fry has it covered. The 75-year-old has been in football for a [ ... ]
This website uses cookies
Cookies help us and our partners provide statistics. By browsing this website, you consent to the use of cookies in accordance with our Privacy Policy and Cookies Policy.
Accept & Close