Man of the Match (MOTM) awards are always pretty standard - a nice bottle of bubbly and a gong to go on the mantlepiece. Or so we thought. It turns out there’s a whole world of weird and wonderful prizes that have been handed out over the years.

Our interest was tweaked when we read about Saveli Kononov, the Russian Ice Hockey goalkeeper who was handed an AK47 for his man of the match performance. That’s right, an actual AK47.

And it wasn’t done discreetly either. Oh no. The weapon was handed out in the middle of the dressing room, in front of all his teammates after Kononov had stopped 36 out of 38 shots.

Here’s some of the more bizarre prizes awarded to top performers, thankfully the AK47 appears to have been a one-off...

Winning a cup final and being named MOTM was a career highlight for Scottish midfielder Stephen Glass, something he’ll never forget. But something he’d probably rather forget is the rather odd prize he won for his outstanding performance on the day, back in 1995.

Now the host of The Great British Bake Off, Sandi Toksvig, presented the 19-year-old with a mountain bike courtesy of sponsors Coca-Cola. Of course, he then had to get on the bike and pose for photos in his full kit, including boots! This award was also handed out to Neil McCann the following year who was visibly upset given his side had lost in a 4-3 thriller to Rangers. The bike unsurprisingly didn’t soften the blow. 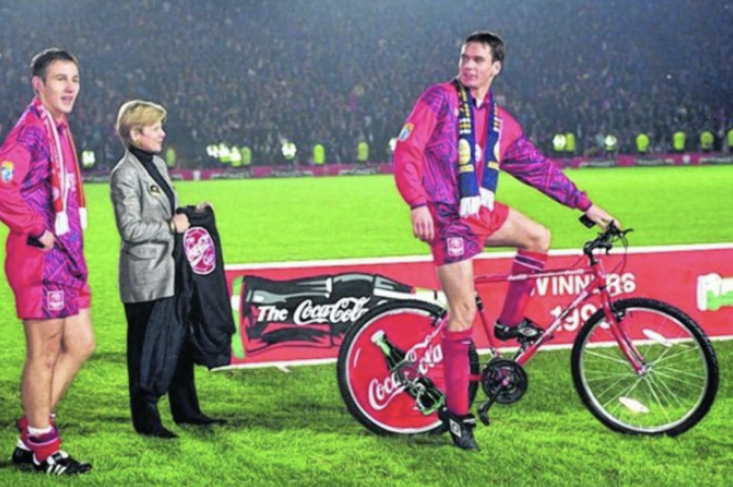 Photo: SNS (via The Herald)

Africa is the home of some brilliant MOTM awards from crates of beer to rice, but our personal favourite is the 5GB of mobile data sponsors Telkom gave out to Memelodi Sundowns player Hlompho Kekana last year. 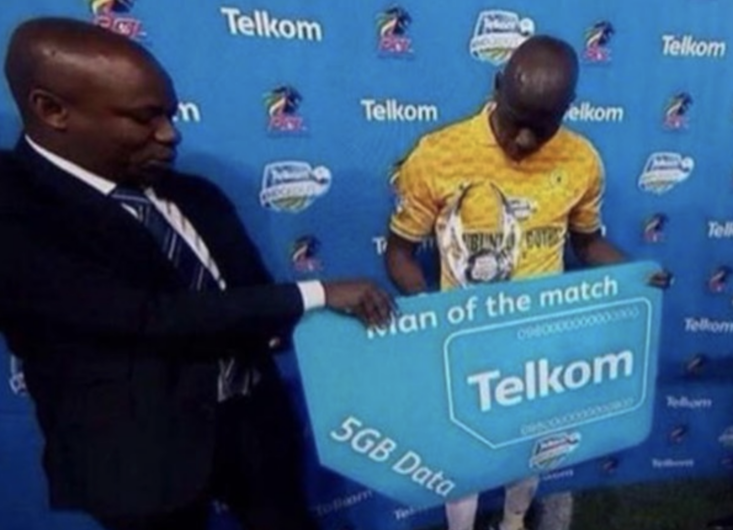 Back in the good old days when footballers were not celebrities, Charlton striker Carl Leaburn went to collect his MOTM award the following day, from his local Rumbelows shop. The sponsors of the competition had chosen him as the winner of the award back in 1993 and luckily for us there is video evidence of this beautiful moment. Imagine Sergio Aguero wheeling a new plasma TV out of Currys nowadays...

This one is made by the fact that Lanus striker Lautaro Acosta seems genuinely delighted with his prize. Something you are more likely to see on Catchphrase than a football pitch, in 2017 he picked up a BBQ Grill and a personalised apron to go with it, thanks to sponsors Burger King. 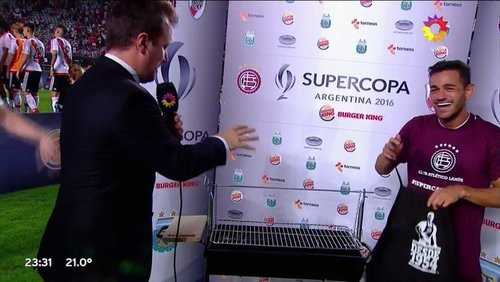 Goal bonuses and appearance bonuses are common in football but for some reason, a MOTM bonus seems strange, especially when presented in this format. Lebogang Manyama of Ajax Cape Town was presented with a card loaded with 2000 rand (approximately £110) after his midfield masterclass against Orlando Pirates in 2012. 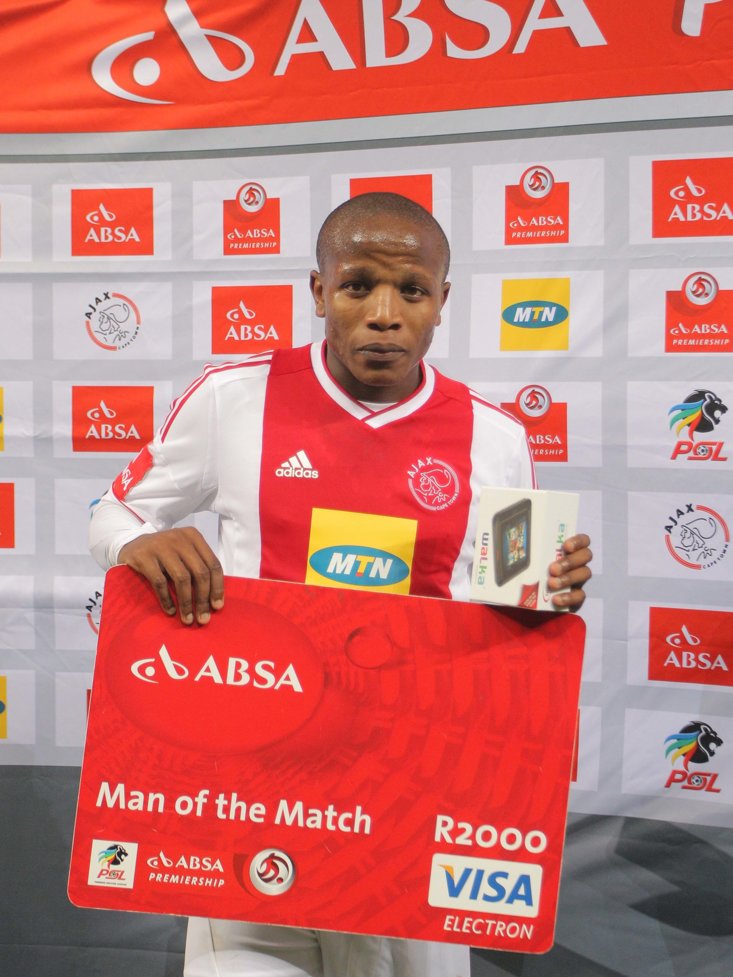 Raul is one of the most iconic and successful footballers of his generation, winning three Champions Leagues and six La Liga titles so, by comparison, this was certainly a low point of his career. When playing for the New York Cosmos in 2015 he won MOTM and was then presented with a tacky model of a Fly Emirates aeroplane, which he seemed unsure about. Just pop that one alongside your Champions League medals mate... 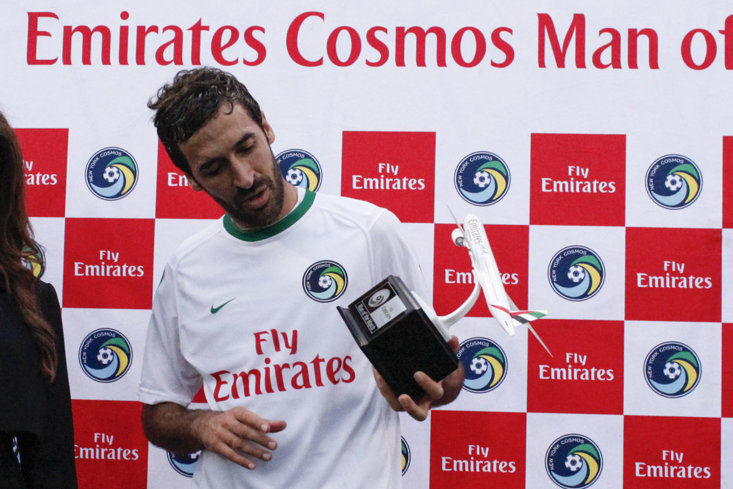 Arsenal Ladies’ Emma Byrne had a corker of a game against Gothenburg in the Champions League in 2012, and was rewarded for her glittering performance with a lovely bunch of flowers. To be honest it would have been absolutely fine if they’d have left it there but then, inexplicably they also gave her a cool box!?

It looks like it cost about £15 and is verging on degrading, although she made the best of a bad situation. 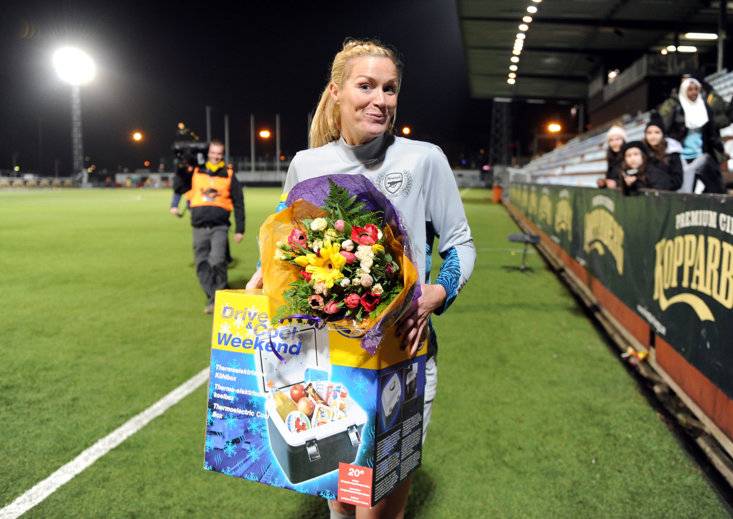 Well done, you’ve won MOTM! Here’s a live chicken. The strange thing about this one is that it is not a one-off, this happens every single week at Polish club Gornik Zabrze. This is thanks to one loyal fan, Stanislaw Setkowski, a chicken breeder who brings one of his prized possessions along to every game.

Club 25 Football
@Club25Football
adidas' Condivo template is the gift that keeps on giving.... not that different from herpes, except uglier. This is the away kit for Polish club GÃ³rnik Zabrze, and no, we don't know why they award their man of the match with a live chicken..... 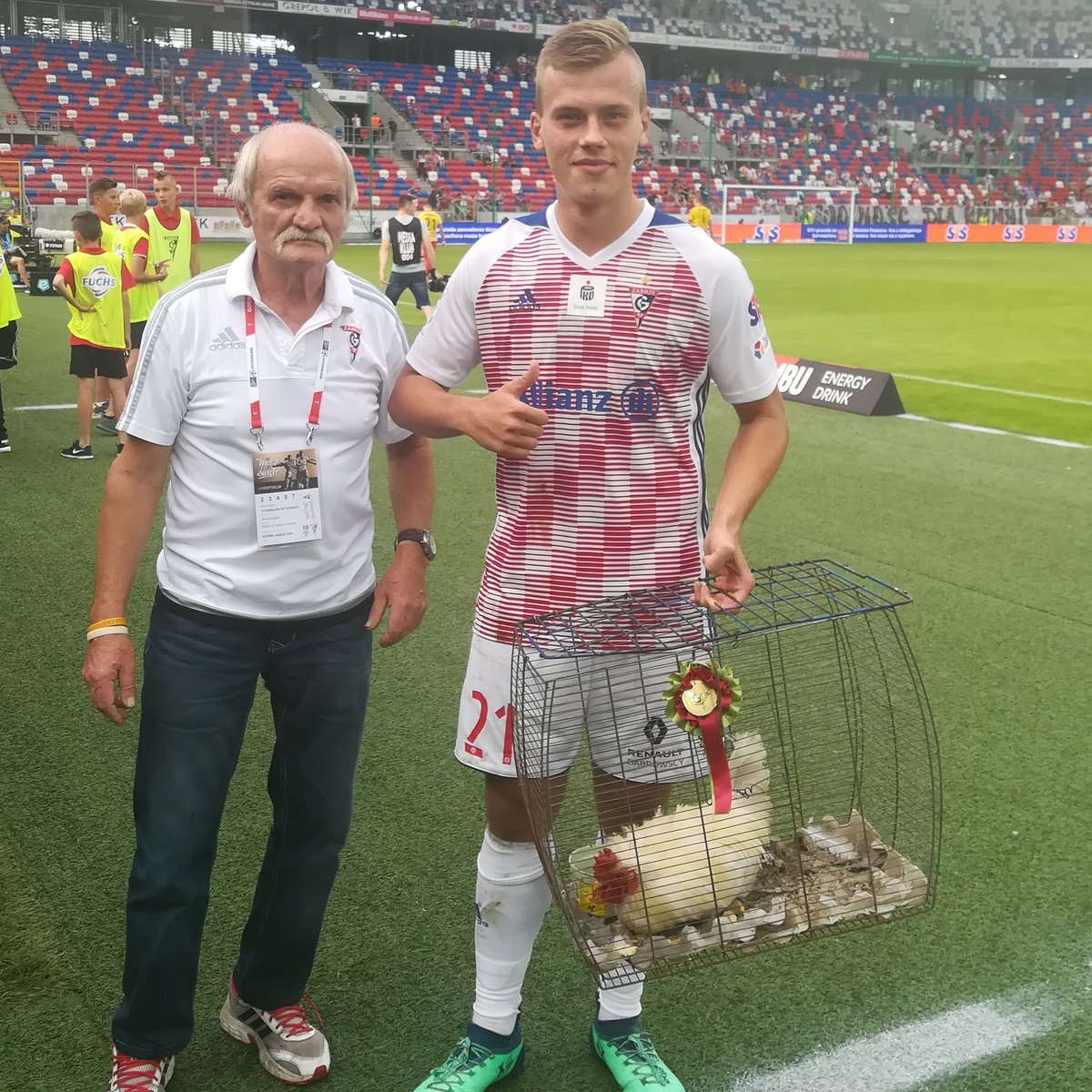 1
3
x
Suggested Searches:
Tyson Fury
Manchester United
Marcus Rashford
Lewis Hamilton
F1
Air Jordan
More
tennis
Ken Rosewall Was The Tennis Player Who Set The Bar For The Modern...
Ken Rosewall may just be the greatest tennis player of all time. As Novak Djokovic attempts to defend [ ... ]
athletics
The Great Wall, Las Vegas And The Bucket-List Marathons To Run...
Life in lockdown has proven to be a marathon, not a sprint. It’s been arduous, tiring, frustrating, [ ... ]
football
Spice Boys, Solskjaer And The Great Manchester United-Liverpool...
The rivalry between Manchester United and Liverpool has manifested into a monster in the 21st century [ ... ]
football
After Two Decades At The Top, Jermain Defoe Is Finally On Course...
Bournemouth were down to 10 men. The game was goalless after an hour. Up stepped an 18-year-old from [ ... ]
ufc
Dan Hardy On UFC 257 And Why Conor McGregor Has 90 Seconds To...
After a year out of the Octagon, Conor McGregor returns to the UFC to face Dustin Poirier at UFC 257 [ ... ]
football
The FA Cup Groundsman Sleeping On The Job To Keep The Rams And...
This season’s FA Cup has seen a bit of everything. From Gareth Bale playing in front of fans in [ ... ]
football
From The Sublime To The Ridiculous, The Most Magical Messi Moments...
Lionel Messi conjures up magic every time he takes to the field and his 644 Barcelona goals have been [ ... ]
cricket
England Test Series Win Would Be A Fitting Reward For Their...
England’s Second Test against Sri Lanka in Galle, which starts on Friday, carries with it two [ ... ]
football
The £13m Restaurant And Jet-Set Mishaps Of Ken Bates' Crazy...
Perhaps we should have expected madness all the way when, 16 years ago today, Ken Bates brought the [ ... ]
us-sports
'Mr. Basketball' George Mikan Was So Good The NBA Had To Change...
His dominance on the floor literally changed the sport. He has been called ‘The NBA’s First [ ... ]
football
James Maddison Said It All... Leicester City Are The Neutrals'...
James Maddison stood there, his smile wider than the Atlantic, and talked of racing back to the dressing [ ... ]
boxing
The Day Ali Talked A Suicidal Man Down Off The Ledge Of A Beverly...
Wilshire Boulevard in Los Angeles cuts right through the heart of Beverly Hills. One particularly famous [ ... ]
football
It Is A Miracle Lionel Messi Has Taken 17 Years To React To...
As Lionel Messi trudged off on Sunday, it felt like we were watching the real world in negative form. [ ... ]
football
Liverpool Have Three Weeks To Rescue Their Title Defence After...
It’s Pep Guardiola’s 50th birthday today, and the best gift the Manchester City boss could [ ... ]
horse-racing
Everything You Need To Know About The £5.7m Dubai World Cup...
On 21 January, one of the finest horse racing carnivals in the world kicks off as the Dubai World Cup [ ... ]
football
How Jimmy Hill's Strike Threat Turned £20 Footballers Into Multi-Millionaires
In January 2018, Mesut Özil signed a new contract with Arsenal Football Club. The German midfielder [ ... ]
tennis
The Incredible Story Of Mansour Bahrami, Tennis' ''Most Naturally...
“We are here to entertain,” insists tennis icon Mansour Bahrami. “If you want to be [ ... ]
football
Rafa's Facts, Mourinho's Respect, It's Football's Greatest-Ever...
It was the surest sign yet that Manchester United are back to cause trouble at the top. Jurgen Klopp’s [ ... ]
football
Why Man Utd Remain The Modern Giants, Even If Liverpool Are...
You can tell that football has changed a lot over the past eight years simply from observing some of [ ... ]
motorsport
Elfyn Evans Is Desperate To Make Up For His 2020 World Rally...
“I can’t repeat the exact words and how I felt at the time,” says Welsh rally driver [ ... ]
sports
The Cube, Swingball And The Home-Based Challenges To Get You...
Lockdown is here. Again. Once more the kids are off school and yet again we are left working from home [ ... ]
football
With Nine Teams In The Frame, Could This Be The Most Exciting...
Just four points separate second from seventh in the Premier League table, while leaders Manchester [ ... ]
football
'Big Fish' James Rodriguez Is Exactly Where He Needs To Be At...
James Rodriguez’s career so far has been a great big ‘what if’. Whereas some footballers [ ... ]
sports
''Hold My Beer'' - How Surfer Mikey Wright Leapt Into Action...
“Hold my beer” bellowed Mikey Wright as he tore off his shirt and charged towards the sea. [ ... ]
us-sports
The Headbutts, Fall-Outs And Four-Day Benders That Made Dennis...
They called him The Worm. It may now be over two decades since he last played at the highest level in [ ... ]
boxing
The Skipping, Sushi And 6am Starts Behind Canelo Alvarez's Billionaire...
Saul ‘Canelo’ Alvarez is not only one of the richest sportspeople on the planet, having [ ... ]
sports
Team GB Star Lutalo Muhammad's Guide To Sleeping Like An Olympian
Practice makes perfect, and Olympic athletes spend years honing their craft in pursuit of medal glory. [ ... ]
football
How Cheung Chi Doy Flew Solo To Become Hong Kong's Only European...
Sixty years ago, on 14 January 1961, two teams walked out at Bloomfield Road for a Saturday football [ ... ]
sports
The Top Motivation Tips To Keep Your 2021 Fitness Kick On Course
We are now getting stuck right into January and the new year, and with the first proper weekend behind [ ... ]
football
Remembering Josef Bican, The Only Footballer Cristiano Ronaldo...
It is the perennial argument.. Who is the greatest ever, is it Cristiano Ronaldo or Josef Bican? Ok, [ ... ]