Football
Features
The Portuguese has made a stunning impact since signing last January
Simon Lillicrap
14:00, 06 Jan 2021

Manchester United are flying. Ole Gunnar Solskjaer’s men have transformed themselves from mid-table muddlers into genuine title contenders for the first time since Sir Alex Ferguson’s departure in 2013. Although Solskjaer’s managerial style must be praised, in all truth this transformation is all down to one man. Bruno Fernandes.

No individual player has made a bigger impact in his first 12 months at Manchester United since Eric Cantona joined from Leeds in 1992. In fact, here are five reasons why Bruno is the new King Eric for Solskjaer's men.

When Fernandes joined Manchester United from Sporting on 30 January 2020, the Red Devils sat fifth in the Premier League table, six points off the top four and a whopping 36 points behind eventual champions Liverpool. Since his arrival, no other side in the Premier League has accumulated more points. Nope, not even their Merseyside rivals. The transformative impact he has had on the entire club has been simply staggering.

Without a league title in seven years, that drought pales into insignificance to the one Eric Cantona walked into in November 1992. When he arrived from Leeds for £1.2m, Manchester United were eighth in the table, without a league title in 25 years and Alex Ferguson was coming under pressure to deliver having been at the club since 1986. This carefree, talented enigma was the spark that delivered the Red Devils back-to-back Premier League titles and began an unforeseeable era of dominance. Now Bruno is the main man who can save Solskjaer and drive United into a new era of success. 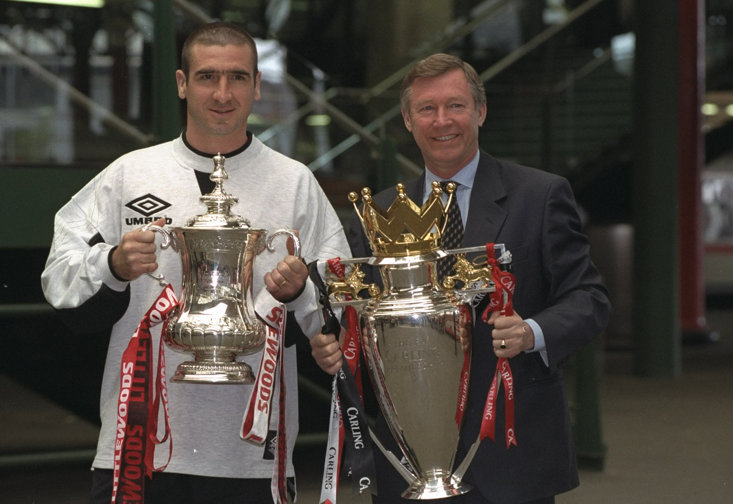 So yes, Manchester United have been the most dominant side in the Premier League since his arrival, but what has Fernandes brought to the table? His output is remarkable from a statistical standpoint. In fact, only Harry Kane has had more goal contributions in England’s top flight this season. The Portuguese has 11 goals and seven assists in 16 games in 2020-21, and as a United player he has a total of 33 goal contributions in 30 games, an average of one every 75 minutes.

That exceeds everybody in the same time period... Kane, Kevin de Bruyne, Mo Salah, they all fall short of this brilliant creator. By comparison, in Cantona’s first full season at Manchester United (1993-94) he bagged 18 goals and got 12 assists to boot. If Fernandes keeps up his current rate of goal contributions, he should fly past both of those figures. In terms of the numbers at least, the 26-year-old is more productive than his illustrious French predecessor.

Paul Ince recalls that when Cantona walked into United’s famous old training ground at The Cliff for the first time, “He just had that aura and presence. He took responsibility away from us. It was like he said: ‘I’m Eric, and I’m here to win the title for you.’”

Although Fernandes’ arrival was a little less arrogant, he did arrive with the support of Cristiano Ronaldo, Nani and even Bernardo Silva, despite the latter playing for his new city rivals. Picking the number 18 in tribute to one of his favourite players, Paul Scholes, was guaranteed to make him a hit with the fans, but among the players he instantly gained respect, standing out in training due to his sheer ability.

He may not wear his collar up, but he plays with the swagger and arrogance needed to become the Premier League’s best player. For the first time in a decade, United can go into games knowing they boast an unstoppable weapon, the most productive - and arguably the outright best - player in the league. 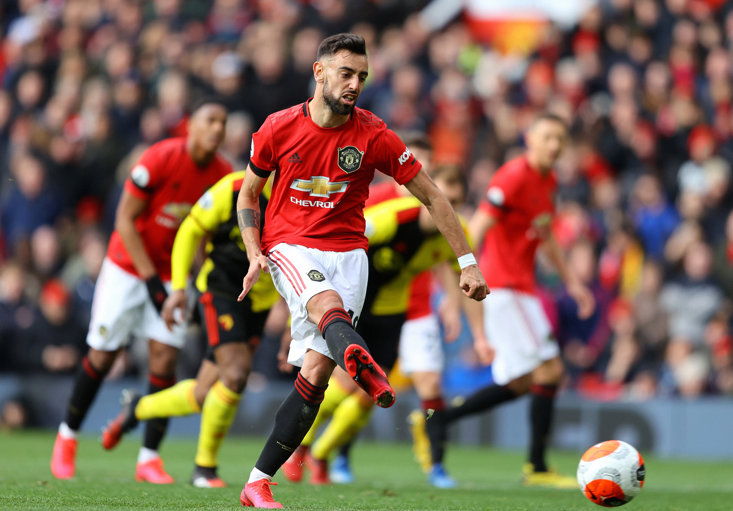 Manchester United and penalties are a match made in heaven. In 2018, Opta confirmed that despite all their great takers, Eric Cantona was the Manchester United penalty king of the Premier League era. The enigmatic Frenchman scored 14 of his 16 attempts in the league, giving him a conversion rate of 87.5 per cent. He could’ve added to that tally, but with the likes of Denis Irwin and Steve Bruce playing at the same time, penalty-taking duties were often shared.

Onto Fernandes. Even with Paul Pogba and Marcus Rashford in the team he has established himself as the number one at the club for spot-kicks. Despite playing less than a year in the English top flight, the introduction of VAR has meant he has already taken 10 Premier League penalties, scoring nine of them with his immaculate ‘hop’ technique. Only Newcastle’s Karl Darlow has been able to keep him out, giving him a conversion rate of 90 per cent. Yep, that’s better than Cantona and puts him at the top of United’s penalty tree.

Angel Di Maria couldn’t cut it, Alexis Sanchez flopped, and Paul Pogba hasn’t hit the heights expected of him. Manchester United’s creative burden has been passed from underperforming player to underperforming player since 2013, and although it has taken seven years they now have found the player who seems to flourish under that pressure.

Not since Wayne Rooney have United had a player who can turn a game around at the flick of a switch, and for too many years players have gone into hiding when things get difficult. Not Bruno. He is United’s main man. Everything goes through him and when they are under pressure, they turn to him to get them out of trouble. He is reliable, trustworthy with the ball and clinical in key moments. Just like King Eric was...