Forget the fireworks and the London Eye, the Six Nations is the surefire sign that any new year is in full swing. And 2020’s edition is just around the corner with new stories to be told and heroes to be made.

The likes of Alun Wyn-Jones, Courtney Lawes and Stuart Hogg will be looking to etch their names into the history books of the northern hemisphere’s greatest rugby spectacle, but there have been plenty who have become notorious for actions both on and off the field in the past.

Below, The Sportsman takes a look at some of the iconic mavericks that have graced this tournament over its 20-year history.

Simply put, a legend of international rugby. The Italian maestro is the most capped player in the history of the Six Nations, with 69 appearances to his name in a career which spanned 15 years. A true icon of Italian sport, Parisse has lost in every single way imaginable.

While playing for Italy he has lost more than 100 games in total and has one of the lowest win percentages in rugby history. His Italian side has been dismantled, pipped to the post, beaten by a late drop-goal, yet he has remained as an almost defiant constant.

And he’s no normal player either. This is a guy who regularly passes without looking, catches lineouts one-handed and diverts it straight to the scrum-half, and provides an enviable physical presence.

It is certainly those defeats that make the rare wins so special but, for Parisse, his career has lasted so long simply because of his love for the game.

Although he hasn’t made it into the initial Italian squad this time around, he will make his farewell appearance in the Six Nations against either England or Scotland at home. The opportunity to say farewell to rugby at the 2019 World Cup was cruelly taken away from him as Typhoon Hagibis wreaked havoc with the scheduling and forced Italy’s final match to be called off. This will be a truly fitting goodbye for a true winner, despite the Azzurri’s stranglehold on the wooden spoon.

When Shane Williams was told he was too small to play rugby and that he might be better off focusing on football instead, surely even he didn’t believe he was going to become Wales’ all-time leading try scorer.

He weighed in at just 11 stone on his debut in 2003, but by the time he won the Grand Slam in 2005 he was well on the way to becoming a global star and any fears over his size we well behind him.

However, his 2005 would soon turn downhill, as he was erroneously held in Cyprus over an alleged assault. Things got worse as police lost his passport, while Williams’ lawyer claimed the entire thing was a complete stitch-up. When home, Williams claimed he'd rather have holidayed in Tenby. What drama.

The legendary Welsh winger would end his career in Japan, playing for the catchily named ‘Mitsubishi Sagamihara DynaBoars’ and can now be seen regularly working as a pundit.

The moral of the story? Don’t stick to football. 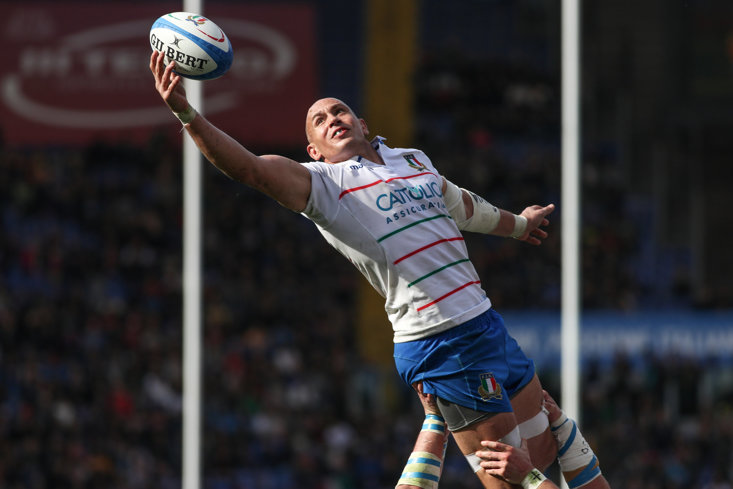 The cousin of French footballer William Gallas, Bastareaud emerged as an iconic figure in the French side. He was a crucial member of the side that won the Grand Slam in 2010 and fans grew to love his no-nonsense playing style.

It hasn’t been all plain sailing for the Frenchman though. On a tour of New Zealand and Australia in 2009 he faked being beaten up by thugs when he had actually just been drunk and tripped over the table in his hotel room. He fabricated the story as he didn't want to get in trouble with the coaching staff! He didn’t get away with it, but still made a total of 54 appearances for his country before retiring from international rugby last year.

He left his greatest mark on the Six Nations in 2010 when coming up against Ireland great Brian O’Driscoll, with one memorable right-hand fend which remains legendary to this day in French rugby circles.

He made a big leap across the Atlantic this year, joining Rugby United New York - a side which was only founded two years ago and is a pioneering force in American rugby.

Perhaps the most iconic Six Nations player of all time, the instantly recognisable Sebastien Chabal become a huge celebrity due to not only his hairy appearance but his size and aggression on the field.

Having left his factory job to take up rugby, the man known as ‘The Caveman’ became a national hero for the French when he was a part of the Six Nations-winning side of 2007. He was so popular that the term ‘Chabalmania’ was created by journalists in France for the sheer frenzy he created with his rugged looks and recognisable beard.

His staring down of the New Zealand Haka during the World Cup is still an iconic image, but nowadays he is a member of the Champions for Peace club looking to make sport a tool for dialogue and cohesion. Oh, and in his spare time he's a bit of a Proclaimers fan if his random rendition of their hit '500 miles' at the Hong Kong Sevens is anything to go by.

Sky Sports Rugby Union
@SkySportsRugby
ðŸŽ¤ What more could you want on a Friday morning... ever seen anything like this on a rugby field?! ðŸ˜‚
Does anything say @WorldRugby7s like SÃ©bastien Chabal dressed as a caveman singing The Proclaimers?!
Appropriate song choice, @Scotlandteam ðŸ´ó §ó ¢ó ³ó £ó ´ó ¿ in action now.
699
2363

If there is one English player who typifies exactly what it means to play for your country in the Six Nations, it is Lewis Moody. With a face that has suffered from two broken noses and a fractured cheek, he has also broken his hand, suffered a hip micro-fracture, three broken toes and a fractured navicular bone. It is fair to say he has put his body on the line for his country on multiple occasions.

He gained the nickname ‘Mad Dog’ from his teammates for a reason.

On one occasion he charged down a full-back’s kick, throwing himself head first onto his opponent’s boot, and then still wanted to play on despite the fact the collision had left him with blood streaming down his face. As he later told the Daily Mail:

“I found it frustrating. We were losing. I couldn’t see a thing out of my left eye, but I wasn’t that bothered. I said: ‘Can I stay on the pitch?’ The ref told me to go off because I was bleeding and I was taken straight to the hospital.”

x
Suggested Searches:
Tyson Fury
Manchester United
Marcus Rashford
Lewis Hamilton
F1
Air Jordan
More
football
With Nine Teams In The Frame, Could This Be The Most Exciting...
Just four points separate second from seventh in the Premier League table, while leaders Manchester [ ... ]
football
'Big Fish' James Rodriguez Is Exactly Where He Needs To Be At...
James Rodriguez’s career so far has been a great big ‘what if’. Whereas some footballers [ ... ]
sports
''Hold My Beer'' - How Surfer Mikey Wright Leapt Into Action...
“Hold my beer” bellowed Mikey Wright as he tore off his shirt and charged towards the sea. [ ... ]
us-sports
The Headbutts, Fall-Outs And Four-Day Benders That Made Dennis...
They called him The Worm. It may now be over two decades since he last played at the highest level in [ ... ]
boxing
The Skipping, Sushi And 6am Starts Behind Canelo Alvarez's Billionaire...
Saul ‘Canelo’ Alvarez is not only one of the richest sportspeople on the planet, having [ ... ]
sports
Team GB Star Lutalo Muhammad's Guide To Sleeping Like An Olympian
Practice makes perfect, and Olympic athletes spend years honing their craft in pursuit of medal glory. [ ... ]
football
How Cheung Chi Doy Flew Solo To Become Hong Kong's Only European...
Sixty years ago, on 14 January 1961, two teams walked out at Bloomfield Road for a Saturday football [ ... ]
sports
The Top Motivation Tips To Keep Your 2021 Fitness Kick On Course
We are now getting stuck right into January and the new year, and with the first proper weekend behind [ ... ]
football
Remembering Josef Bican, The Only Footballer Cristiano Ronaldo...
It is the perennial argument.. Who is the greatest ever, is it Cristiano Ronaldo or Josef Bican? Ok, [ ... ]
motorsport
Lando Norris' Stunning McLaren 570S, £1.4m Track Test Cars And...
What were you doing at the age of 21? Finishing university, taking the first steps on your career ladder, [ ... ]
darts
Gerwyn Price Would've Quit Darts For A Wales Rugby Union Cap,...
Gerwyn Price dreamed of representing the Wales national rugby team. Life, though, works in mysterious [ ... ]
football
20 Years On, Is Eriksson's England Remembered For The Successes...
It was a time of relative success and front-page scandals. The FA’s decision to appoint England’s [ ... ]
football
Beckham's MLS Move Gets More Monumental Every Year, And Messi...
“I would like to play in the United States someday, it’s always been one of my dreams... [ ... ]
football
Cheers Bud, Messi Pays Respect To The World’s Best ‘Keepers...
Budweiser continues to celebrate Lionel Messi’s record-breaking 644th goal by sending every goalkeeper [ ... ]
football
No More Begging Bowls, Teams Like Marine Should Get 100% Of...
There was an inevitability about the 5-0 away win on the pitch, but Sunday’s third-round clash [ ... ]
sports
The Good, The Bad And The Downright Ugly, What Happens When...
Cardiff City Football Club is one of the most traditional organisations of a deeply traditional sport. [ ... ]
sports
Meet Milly Pickles, The Inspiring Para-Athlete With Five Million...
With five million likes and 204,000 followers on TikTok, and a brand deal with one of the UK’s [ ... ]
boxing
The Hard Work, Long Days And Big Meals Behind Tyson Fury's Incredible...
Tyson Fury has found solace in working out, discovering it is the thing that not only keeps him in shape [ ... ]
us-sports
How Kareem Abdul-Jabbar Brought The Lakers' Incredible 33-Game...
He towered at seven feet two inches tall. The sky-hook was in full flow. Once again the Los Angeles [ ... ]
motorsport
Biker Sam Sunderland Won't Let Covid-19 Kill His Dream Of Another...
It was back in 2017 when Sam Sunderland wrote his name into the record books, becoming the first Brit [ ... ]
football
James Rodriguez's Car Haul Includes £300k Worth Of Mercs, And...
James Rodriguez is an absolute Rolls Royce of a footballer and had Everton’s midfield purring [ ... ]
football
Heroes V Minnows, Legends V The Lowly, The FA Cup Third Round...
The magic of the FA Cup has been slowly dying, they say. There are the scattered fixtures and irritating [ ... ]
sports
The Diet Plans To Suit All Shapes And Sizes, From 5/2 To Fasting...
The New Year’s festivities have been and gone, and Christmas is a distant memory, at least until [ ... ]
motorsport
The Major Milestones Behind Lewis Hamilton's Relentless March...
Lewis Hamilton. His name is Lewis Hamilton. And there’s a million things he’s done. But [ ... ]
us-sports
11 NBA Titles And A 70% Win Rate, Phil Jackson Is The Best Coach...
There is simply no other who can touch him. He taught Jordan, Kobe, Shaq, Fisher, Pippen, Rodman. He [ ... ]
football
Big-Game Belief Proves City Are The Real Deal And United Are...
Manchester City are going to Wembley again. Manchester United are fielding questions about their readiness [ ... ]
boxing
Anthony Joshua Is The Selfless Sports Star We All Need In Our...
We need sport more than ever right now. We need it to distract, to entertain, to lift our mood and help [ ... ]
football
Thirst, Dedication, Craft, Bravery, Words That Define The Genius...
Even Gianluigi Buffon and Jan Oblak couldn’t stop Lionel Messi, but they got a little something [ ... ]
football
Long Live Le King! Why Bruno Fernandes Is Manchester United's...
Manchester United are flying. Ole Gunnar Solskjaer’s men have transformed themselves from mid-table [ ... ]
boxing
Canelo Alvarez, The Superstar Who Makes Golf Shirts And A Panda...
What would you spend your money on if you were one of the richest sportspeople on the planet? Saul 'Canelo' [ ... ]