Cristiano Ronaldo and Lionel Messi; Roger Federer and Rafael Nadal; Aryton Senna and Alan Prost; Joe Frazier and Muhammad Ali. For all the tired talk and dreary debate of GOATs (Greatest of all Time), sport is undoubtedly most elevated when a tornado means a volcano.

In basketball, the 1980s were blessed with repeated encounters between two of the best to lace up their Chucks and take to the court. The tectonic clashes between two titans punctuated the decade, and fermented not just a rivalry of individuals but revitalized and significantly enhanced the greatest club contest in North America, beginning the second and arguably most formative chapter in the NBA-defining franchise rivalry: the Boston Celtics and the Los Angeles Lakers.

It was the story of two outstanding players who became the spiritual successors to Bill Russell (still the record-holder as the single player with the most Championships to his name) and Wilt ‘The Stilt’ Chamberlain, or more symbolically Russell and Jerry West, and it was cemented when, on May 29 1980, Larry Bird of the Celtics beat out Earvin ‘Magic’ Johnson of the Lakers to take the Eddie Gottlieb Trophy. 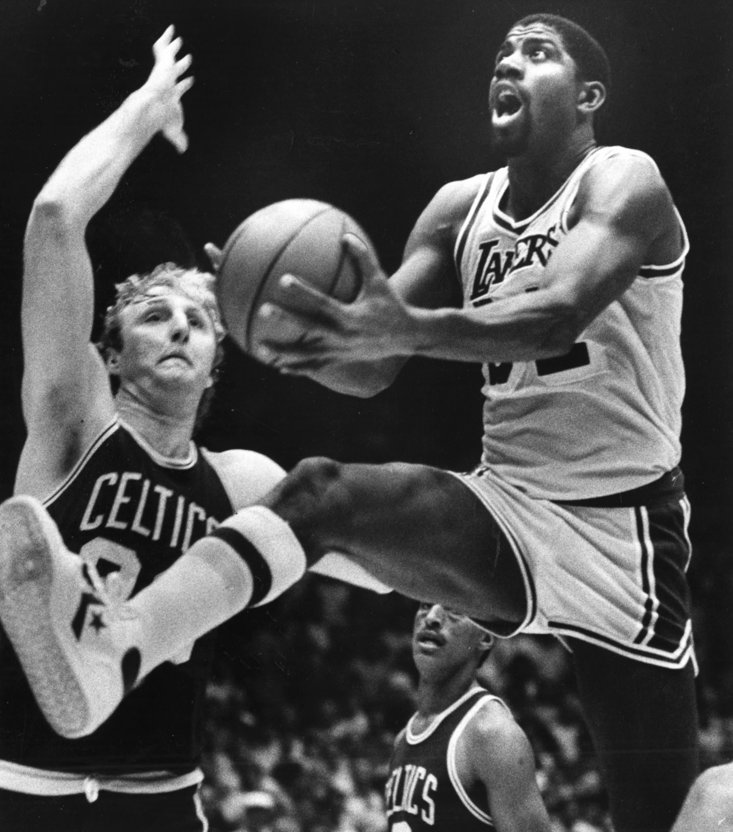 Bird had been recognised as the NBA’s Rookie of the Year, following the trodden path of such luminaries as Wilt Chamberlain and Kareem Abdul-Jabbar. That ceremony for the Gottlieb begins the narrative of the most enduring match-up in NBA history. Star-crossed competitors who couldn’t have been more intensified by their being counterparts at the grandest of empires on opposing coasts, who seemed perpetually destined to meet in the showcase event of the year.

It had its roots when the two freshmen were selected to play for Team USA in a World Invitational Tournament in 1978. In one game, Bird dominated College Player of the Year Jack Givens, impressing Johnson.

“I couldn’t wait to call home to tell my boys ‘This dude named Larry Bird is for real’,” Johnson recalled in the documentary ‘A Courtship of Rivals’, “‘he is the baddest white dude I’ve ever seen in my life!’”

The tournament provided some beautifully profound plays between the pair, at one point a sublime interchange of  telekinetic no-look passes, tantalising what could have been if Bird and Magic weren’t subsequently separated by 3000 miles.

The rivalry had truly begun the year prior to their debut NBA season, in Salt Lake City, Utah, with the 1979 NCAA Basketball Championship Game and the clash of two #33s. Indiana State versus Michigan State - the highest rated college final in television history the first encounter between Larry Bird and Earvin ‘Magic’ Johnson. 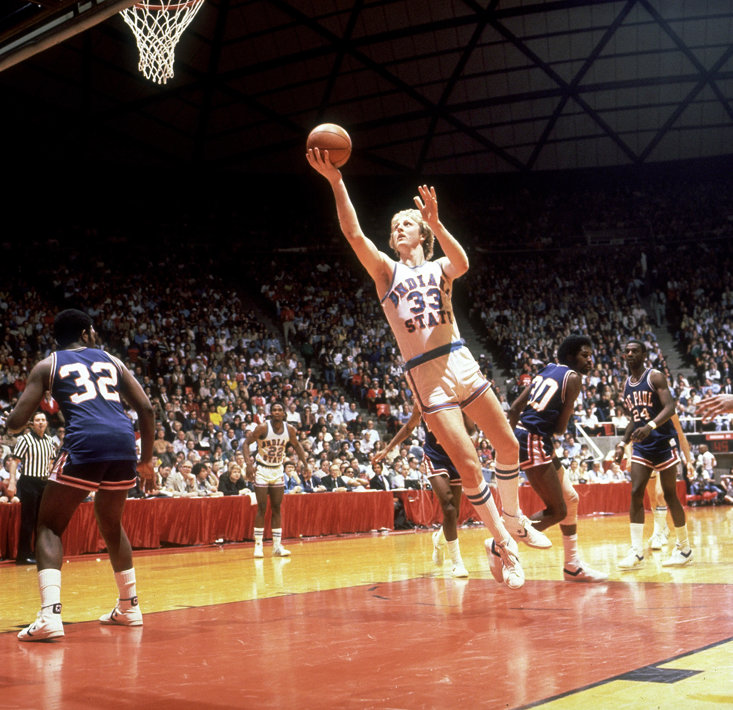 Notable sports presenter Bryant Gumble described the significance of the clash, why it garnered so much attention, and while it still resonates. “They were polar opposites. One black, one white. One outgoing, one shy. That was the charm of the attraction.” The tone had been set with a perceived snub by the Bird on Johnson pre-game and the tactics by Michigan was to nullify the opposition chants that ‘Indiana has a new state Bird’ by double-marking him out of the game. The 64-75 score to Johnson and Michigan Bird would later concede ‘was the toughest loss that I ever took.’

That summer Bird finally moved to the Boston Celtics, the ‘winningest’ team in NBA history, due to the still-unparalleled Red Auerbach era that produced 11 Championships in 12 years between 1957 and 1969.

Johnson, meanwhile, had the prestige of becoming the Number One pick for the west-coast franchise who had a respectable six rings themselves (a tally combined from their previous incarnation as the Minnesota Lakers).

The Rookie of the Year announcement was revealed on the very same day Johnson and the Lakers were due to play their decisive NBA Finals game against the Philadelphia 76ers.

There was no competition in the crop: Bird received 63 votes. Johnson just three.

Johnson, spurred on by the announcement, led his franchise to the Championship, notably producing a stunning career-defining Game 6 over the Philadelphia 76ers when he played all five positions in a performance that reduced Bird and injured teammate Abdul-Jabbar to the small print. Magic scored a game-high 42 points, provided seven assists, and hit a game-high 15 rebounds. His first ring had been bagged. By the end of the decade he would have a further four, three of them achieved by defeat of the Celtics, and of Bird.

That day, however, was perhaps the most significant in establishing the tone that was to define a whole NBA decade. Both players were envious of each other's success. “Even though I won the Championship I still wanted to win Rookie of the Year too.” admitted Johnson. Likewise Bird: “He won a Championship. I was pissed. I wanted one.” 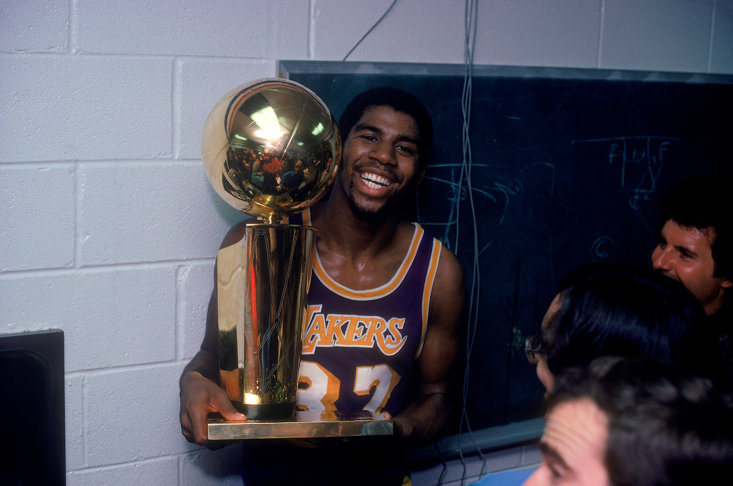 Johnson with his 1980 NBA Championship trophy

Across the next nine years Bird and Johnson combined would claim eight of nine Finals. Johnson lit up the Western Conference with his ‘Showtime’ style, a smile seemingly tattooed on his face. He was signed to a brobdingnagian 25-year $25million contract. Simultaneously, Bird’s working class, self-proclaimed ‘Hick from French Lick’ ethos similarly chimed well in Massachusetts.

Their passing was exquisite, teamwork and necessity to win unparalleled, with individual numbers off the chart. Aside from expressed personalities, they were two sides of the same coin and both West Coast and East Coast profited from this Romulus and Remus

“I had to have him there,” said Bird, “He was like a crutch, someone I could compare myself to.”

The first year that the Finals didn’t feature one of the two franchises was 1990. In the time since that historic, beloved decade, their recognising of qualities in one another, their individual control of the game, and ‘craziness to excel’, as Johnson described, has led to open, reciprocal respect that had been previously between repressed throughout their playing careers in order to pursue glory. Bird was also one of the first people Johnson called when his HIV diagnosis was to be made public.

The two and their respective individual can stand tall on their own but have to ultimately concede will be eternally intertwined. Though Bird was a forward and Magic was a guard meaning that that NCAA final of ‘79 would unfortunately, rarely be replicated.

“We’ve got this connection and it’s never going to be broken,” said Bird, “Right to our graves. They’ll be talking about this 100 years from now.”

Larry Bird and Magic Johnson, the definitive Dioscuri in sport.