Us Sports
Features
Jamie Gillan has been snapped up as a free agent after a remarkable rise
Elliott Bretland
15:46, 05 Sep 2019

Jamie Gillan lines up to make his NFL debut as the Cleveland Browns’ punter this week.

This is not a story of an American Football enthusiast living out his childhood dreams, however.

In fact, the 22-year-old, from Scotland, was rugby-obsessed as a teen and somehow fell into his new occupation.

The tumble has gone so well though, that he has earned a place on the Browns’ 53-man roster for their showdown with the Tennessee Titans, nailing his spot in the team ahead of former Super Bowl champion Britton Colquitt.

Set to become one of only a handful of Scots to play American Football in the history of NFL, Gillan’s incredible rise began when he moved from Inverness to Edinburgh in a bid to fulfil his ambition to represent his country at rugby union.

So determined, he attended Merchiston Castle boarding school famed for educating so many Scotland internationals.

However, when his dad landed a new job in Maryland, fate would fire him to another sporting path.

Having practiced his kicking during his rugby days, Gillan realised American Football could feed his hunger for competitive sport.

Approaching his high school teacher in the hope of getting a shot, was just the beginning.

Later earning a scholarship from the little known university of Arkansas-Pine Bluff, he was just as excited at the prospect of having free balls to kick and free food to eat as he was just being on a team. 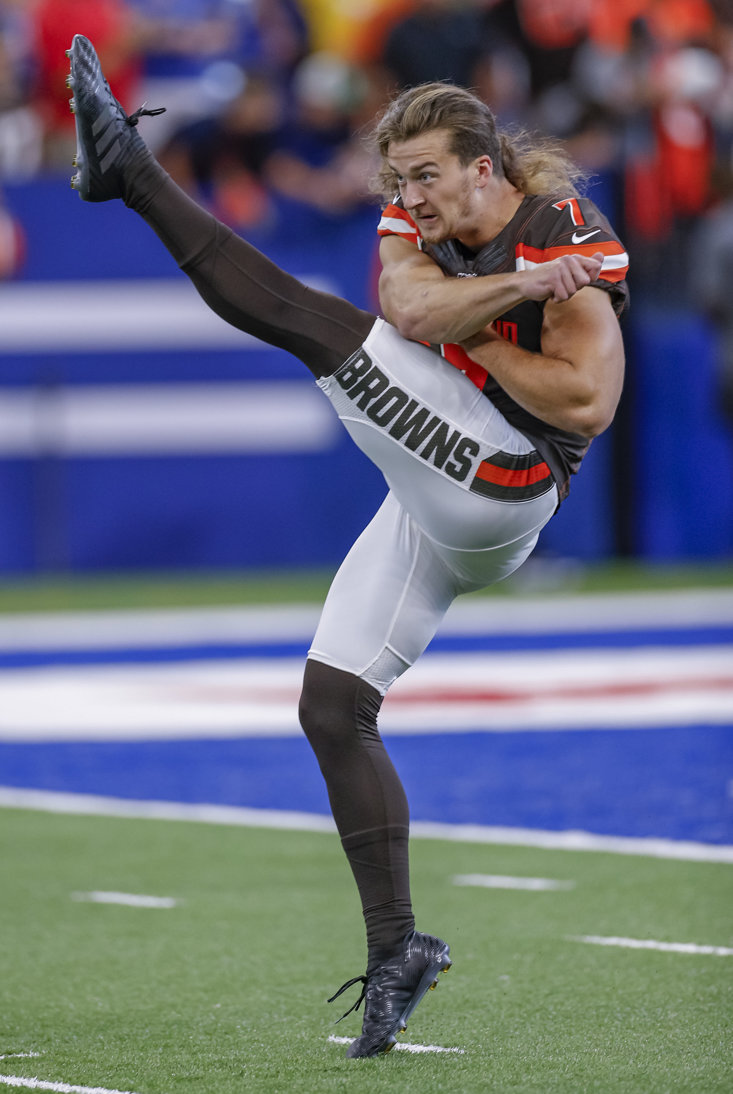 Speaking to the press earlier this year, Gillan, nicknamed ‘The Scottish Hammer’, revealed how his first foray into the sport came to be.

“I was playing soccer and rugby at the time and showed up to a football game. I watched a kicker, he didn’t make the extra point, it hit the back of the offensive line,” he explained.

“I went up to the coach after the game and I said: ‘You know I’ve got a rugby playing background? I’ve been able to do a torpedo punt since I was eight-years-old, you know I can do all three for you if you wanted’.

“We went out the next day, he literally told me ‘Okay, make the ball spiral.’ So I made the ball spiral and then I kicked a long field goal in front of him, and then he said, ‘you’re on the team.’ So I played five games of high school football and two all-star games.

“It was that first coach who gave me the nickname ‘The Scottish Hammer’ which makes it quite funny.

“Then I got offered a full scholarship through Facebook to Arkansas–Pine Bluff about three weeks before training camp. I didn’t care where I was going but he said: “Do you want a full scholarship?” So I’m right there - free weight room, free balls to kick, free food, I’m happy.”

Despite going undrafted, he was snapped up as a free agent by the Cleveland Browns.

The team put their faith in him, giving him the chance to punt in their last two pre-season games. Gillan’s taken the opportunity with both hands, completed the catch and made the roster.

He was told the news he would be Cleveland’s punter as he enjoyed some downtime and drinks with his dad at The Flying Monkeybar.

Browns general manager, John Dorsey, called to inform him he’d made the grade, much to the delight and amazement of Gillan’s family and friends.

“As soon as I got off the phone, everybody was kind of looking at me like, ‘What was that?’” he told AP, “And I just kind of said, ‘It looks like I’m playing Tennessee next week,’ and everybody just started going crazy, so it was really cool. It was good fun with them.”

Cleveland Browns
@Browns
So what was @ScottishHammer7 up to when he got the call on Saturday?
254
2531

Standing at 6 ft 2, with flowing locks and broad shoulders, he certainly looks the part though his broad accent will surprise a few. His beaming smile in NFL interviews a constant reminder of his amazing journey.

When he lines up at the FirstEnergy Stadium, Cleveland Browns will have to ensure they have plenty of spare balls.

Such is his power, they tend not to last very long, a skill which proved to be very costly to Gillan before he hit the big time.

Punting the $100 NFL balls he had bought to practice with as hard as he could, he soon realised three of the four were leaking air.

“I was kicking them and I could hear the air coming out of them,” he said on Saturday. “I was like, ‘Oh, man.’ So I treated the last one with a lot of care until the Browns sent me some footballs, which was awesome.”

Cleveland will be happy to foot the bill if Gillan can play his role in helping the Browns Special Teams secure the best possible field position for its Defense, all while making history in his homeland.

With NFL teams required to remain within the league’s salary cap, teams are required to disclose players earnings. According to Spotrac, Gillan will earn $495,000 in 2019.

While a far from modest figure compared to the average salary of £23,000 in his hometown of Inverness, Gillan is the lowest earner in Cleveland, where Odell Beckham Junior is the team’s top earner - he’ll earn $16.75m for his 16 games in 2019.

Competing at the top level in sport, Gillan is delighted the Browns have taken a punt on him.