“Bella is intelligent, resilient, strong and efficient, graceful and beautiful, influential, evolved, and important,” is what the marine biologist and environmentalist has to say. And who are we to argue, right?

The Hawaiian knows a thing or two about sharks. To date she has dived with almost 50 different species of shark around the world, has been doing it since he was 14 and actually spends more time with them than she does with us humans. So why is Bella so special for the woman they call ‘The Shark Whisperer’?

Well, they first met in 2012, deep beneath the crystal clear waters off the coast of Baja in Mexico, and the resulting images of Ocean riding on the huge creature’s fin went viral. ‘The Shark Whisperer’ was born and ever since Ocean has used her platform to try to change people’s perception of sharks and protect them from becoming extinct.

The trained free diver - who can hold her breath underwater for six-and-a-half-minutes and reach depths of 175 ft - believes that sharks are the most misunderstood creatures on the planet. And with more than one million followers on Instagram, Ocean has become a one-woman PR machine for the prize predators. She’s the author of ‘What You Should Know About Sharks’, a best-selling book about their social behaviour and interaction with humans. And in 2019 she starred with Zack Efron in ‘Saving Jaws’, a documentary that tries to combat the negative media coverage associated with the animals. 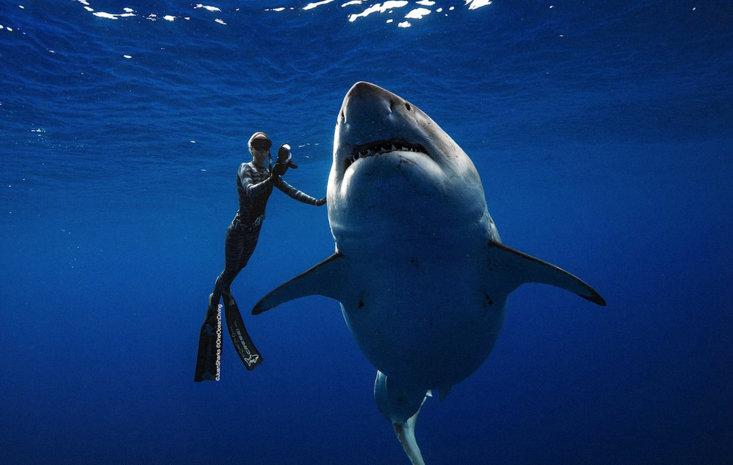 One of her biggest fights is debunking the myths that have been burned deep into people’s brains thanks to the likes of Steven Spielberg’s classic Hollywood franchise, Jaws.

“It’s so sad that when people see images of me with huge great white sharks. They think monster, and what to kill her, that’s down to movies,” she told America’s Today programme.

“Every story needs a villain and after films like Jaws it’s just too easy to manipulate the human psyche and ingrain a deeper, more absurd terror.

“The truth is they swim past surfers and swimmers every day and rarely make a mistake. I’m more scared driving on the road than swimming with sharks. They are a lot more predictable than people. There are just 10 global fatalities from sharks yearly.”

Last year Ocean went viral again when a video emerged of her swimming and touching, actually touching, a two tonne, 20ft long 8ft wide, great white shark. Filmed by her business partner and fiance, Juan Oliphant, it was a very close encounter with one of the largest great white sharks ever seen. Based on the markings, scientists believe it could've been the famous ‘Deep Blue’, a female great white previously found in Isla Guadalupe, Mexico.

So what’s it like to swim so close and actually touch one of these huge, terrifying creatures?

“We never would have imagined we would be fortunate enough to be graced with the presence of this massive, big beautiful, female white shark. It fills my heart with joy and takes my breath away,” she wrote in an Instagram post.

“I waited quietly, patiently, observing as she swam up to the dead sperm whale carcass and then slowly to me passing close enough I gently put my hand out to maintain a small space so her girth could pass.

“I try hard to replace fear with scientific facts and encourage a healthy level of respect for sharks as #apexPredatorsNotMonsters but not puppies…but not monsters.” 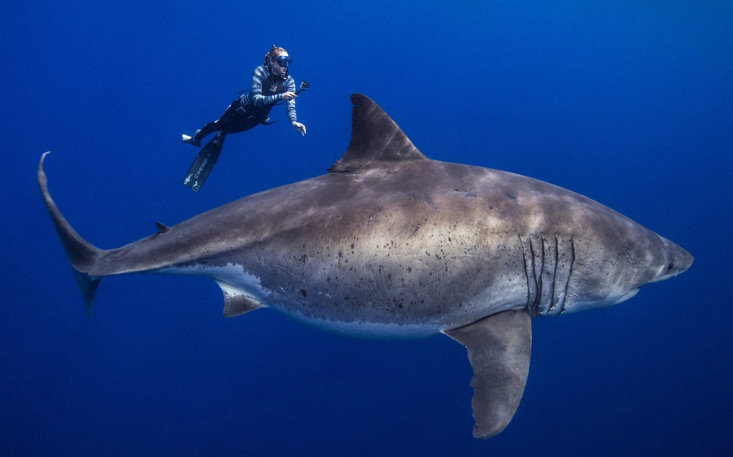 Ocean often wears a signature biomimicry wetsuit that imitates the tiger shark's natural camouflage, in order to get up close and personal.

“In 99.9 percent of the time, sharks cruise gracefully around,” the freediver once noted.

“As long as I keep looking around, pay attention constantly and quietly, and respect and pay attention to the more dominant individuals and challenging juveniles constantly, I am treated as more or less an equal predator. We should never be complacent. We must be respectful and adapt at every second to every movement.”

Back home in Hawaii, Ocean runs her own business, One Ocean Research and Diving. And her all-female team go out on daily dives to help educate people about all things shark, in order to create safer interactions with the animals.

Her main aim in life is to protect the shark. But she faces a massive challenge. Somewhere between 70-100 million sharks are killed annually, insists Ocean.

They are killed mainly for their fins - which are used in the Chinese delicacy, shark fin soup. Ocean says the soup is “neither tasty or nutritious, it is actually toxic, simply a status symbol, and the demand for it is responsible for the global decimation of shark populations by over 90 per cent.

“I need people to see that they’re not monsters so that they can care enough, or respect them enough, just to give them the same protection that dolphins and whales have been given.

“In truth, sharks are intelligent, calculated and generally very cautious about approaching humans.”