Manchester City are the football giant that just keeps getting bigger and bigger by the day.

The Premier League champions announced a £389million investment from American private equity firm Silver Lake this week, and the deal takes the overall value of the City Football Group at a whopping £3.73billion.

That’s more than a billion more than rivals Manchester United, who are valued at £2.2bn on the New York stock exchange. Amazingly, the deal actually breaks the global sports valuations record. This is serious, serious money.

CFG have a stake in seven clubs and, according to the Financial Times, they are now looking to add more to their portfolio in 'aggressive expansion plans'.

As well as that, they obtained 44.3 percent of Girona, who were relegated to the Spanish second tier from La Liga this season, and own a 20% stake in J-League outfit Yokohama F. Marinos.

There are plenty of big names who have plied their trades with City’s satelitte clubs in recent years, while others have made their name as part of the CFG family before going on to bigger and better things.

Over two seasons, Douglas Luiz featured 38 times for Girona as part of the link-up before earning a £10.7m move to Aston Villa this summer.

Then there is the rise of Australia midfielder Aaron Mooy, who was picked up by Melbourne City from Western Sydney Wanderers in 2014 before making the move to Manchester City and immediately being loaned out to Championship side Huddersfield. After leading the Terriers to the Premier League he made a £10m permanent move to the John Smith’s Stadium before heading back to the top flight via a loan move to Brighton following Huddersfield’s relegation last summer. 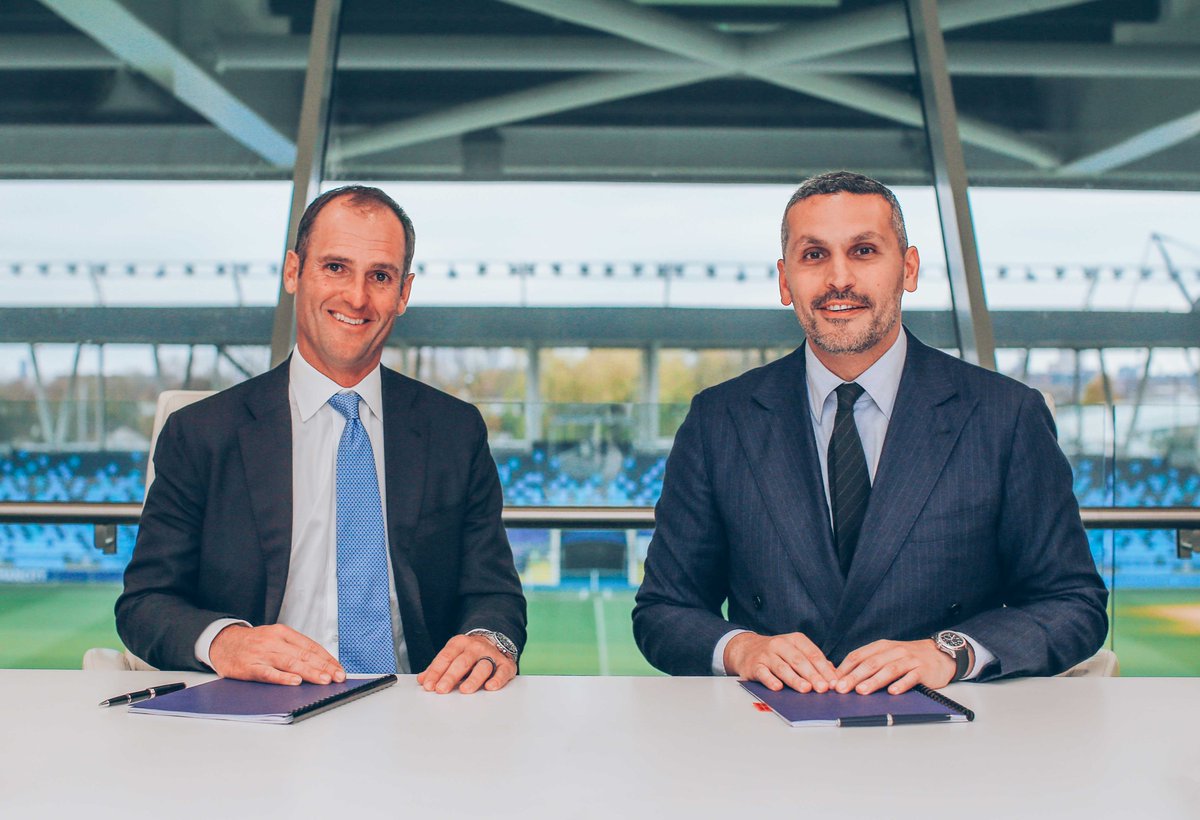 Other notable names to be involved in the wider projects include Patrick Vieira, who managed New York City in the MLS after working with the Manchester club’s development side upon retiring from playing.

The New York club has also been the home of the likes of David Villa, Frank Lampard and Andrea Pirlo during the latter years of their respective careers.

There’s simply no stopping the growth of the City family.

CFG chairman Khaldoon Al Mubarak said: “Silver Lake is a global leader in technology investing, and we are delighted by both the validation that their investment in CFG represents, and the opportunities for further growth that their partnership brings.

“We and Silver Lake share strong belief in the opportunities being presented by the convergence of entertainment, sports and technology and the resulting ability for CFG to generate long-term growth and new revenue streams globally.”

Silver Lake reportedly made an approach for Chelsea in the past having invested in companies such as Skype, and now boasts a 10% stake in CFG.

Earlier this month, City announced they had brought in a record £535.2m last season and it was the 11th season in a row in which they had posted revenue growth.

After signing a mega £650m kit deal with Puma, the figures behind City are due to grow even further.

The CFG project shows no signs of slowing down.

More
boxing
10 Hard-Hitting Trivia Facts You (Probably) Didn’t Know About...
It’s been nearly 45 years since Rocky premiered, and five sequels and a spin-off franchise later, [ ... ]
cricket
World Cups, Podcasts and Panesar: The Sportsman Interviews Alex...
So you think you know your cricket? Well answer this. When did England first win the Cricket World Cup? [ ... ]
boxing
Fighting Mums, Angry Trainers And Broken Ankles: Boxing's Strangest...
Boxing is a sport like no other. Stick two people in a ring, put pride and money on the line, set them [ ... ]
us-sports
Five Stand-Out Stars Who Stole The Show On Netflix's Last Chance...
“I’ll guarantee I’ll rip your f*cking nuts off if you f*ck up in the game on Saturday. [ ... ]
cricket
Better The Second Time Around: The Redemption of Kevin Pietersen
It’s both apt and ironic that Kevin Pietersen, the brash cricketer once known for his fondness [ ... ]
sports
Be Like Lewis Hamilton: The Athletes Who Overcame Obstacles...
“That was close,” Lewis Hamilton gasped, with possibly the world’s greatest understatement. [ ... ]
boxing
Ali’s Communist Twin: The Boxer Who Turned Down Millions To...
Former featherweight world champion Barry McGuigan once said that "Cuban boxers are genetically [ ... ]
boxing
From Pacquiao To Foreman: The Boxers Who Fought Father Time...
Father Time, more so than anyone they share a ring with, is the most challenging opponent any boxer [ ... ]
football
FC Gueugnon, PSG And One Of The Biggest Upsets In French Football...
A $1 billion operation. The most financially powerful club in world football. The possessor of the two [ ... ]
sports
Kevin Garnett, Uncut Gems And The Sports Star Cameos That Don't...
Sport stars making the successful transition from their respective fields to the big screen is nothing [ ... ]
football
Miners To Majesty: Understanding The Brilliance Of The Royal...
Committed, proud, loud and brave. The Royal Blue. They’re coming for you. And what a shade of [ ... ]
football
The Sportsman Interviews Weekend On His Latest Collaboration...
Ninety minutes is usually all that separates the football fan from experiencing the spectrum of emotion; [ ... ]
boxing
The Uncivil War: When Roy Jones Jr. Proved He Was The Best Fighter...
With unmatched hand speed, reflexes and movement that defied all logic and an athleticism that made [ ... ]
boxing
Executioners, Roman Centurions And A Harley: Boxing's Best Ring...
When the theme tune to Star Wars reverberated around Madison Square Garden in 1977 as Muhammad Ali made [ ... ]
sports
Meet The Man Behind The Mouthguard That Tells Your Brain How...
If you have watched a rugby match in the past year or so, you’ve almost certainly seen the work [ ... ]
football
Pulisic, Fernandes And The Premier League New Boys Who Tore...
The Premier League 19/20 is finally wrapped up, the final day of the season duly providing all the thrills [ ... ]
sports
Muhammad Ali, James Bond And A Jetpack: The Best Ever Olympic...
Across all sport, the one event that inspires unity and collectivism are the Olympic Games. The nations [ ... ]
boxing
New Bundini Documentary Shows The True Mastermind Behind The...
History hasn’t been particularly kind to Drew ‘Bundini’ Brown. A difficult man to [ ... ]
boxing
The Mike Tyson Interview: ''Living Takes A Lot Of Courage.''
Mike Tyson’s life has been a well-documented roller coaster ride. A difficult childhood, then [ ... ]
snooker
Booze, Women and Snooker: How Alex Higgins Became The Greatest...
Judd Trump aimed for the pocket of the top-left. A difficult angle but potting the red would allow him [ ... ]
sports
Five Pivotal Moments That Made London 2012 The Greatest Spectacle...
2012 was supposed to be the end of the world, remember? The ancient Mayans predicted a civilization-ending [ ... ]
boxing
Last Round, Folks: When Boxing’s Invisible Champion Was Blitzed...
History has not been kind to Floyd Patterson. Countless world champions have drifted through the annals [ ... ]
cycling
The Music Man And The Machine: When Wiggins And Froome Went...
Brits, find a better sporting highlight reel than that of 2012. We dare you.  Simply put, it was [ ... ]
golf
McIlroy’s Open Victory: When Neither Garcia, Fowler Nor Fowl...
“The Open is the one that we all want, the one that we all strive for and to be able to hold his [ ... ]
sports
Hero, Record-Holder And Tarzan: The Life Of Swimming Sensation...
Me, Sportsman. You, Reader. He hung around with chimpanzees, rode around on the back of wild animals, [ ... ]
football
James Brown In Japan: Around The City That Turned To Football...
There is a freshness to the air in the Earthquake Memorial Park in Kobe harbour in Osaka Bay. For those [ ... ]
sports
Make War, Not Love - From Barton To Boet, The Times The Sport...
The case was announced on July 9, 1975: The State of Minnesota vs. David S. Forbes. It became the first [ ... ]
rugby
From Wilkinson's Heroics To Nelson Mandela - Every Rugby World...
Dan Carter's brilliance, Jonny Wilkinson's boot, THAT image of Francois Pienaar and Nelson Mandela... [ ... ]
football
Japan’s Seismic Soccer Success That Helped Heal A Hurt Nation
Japan experienced the biggest heist in the nation’s history on May 12, 2011. The perpetrators [ ... ]
tennis
The Reign Of The Renshaws: When Tennis' Twin Rockets Smashed...
Starter for ten: which male tennis player has won the most consecutive men’s singles titles at [ ... ]
This website uses cookies
Cookies help us and our partners provide statistics. By browsing this website, you consent to the use of cookies in accordance with our Privacy Policy and Cookies Policy.
Accept & Close