This article first appeared in The Sportsman on 31/03/20

What do Alan Turing, The Doors frontman Jim Morrison and the comedian Lenny Bruce have in common? These high-profile 20th Century icons have all been granted a posthumous pardon, exonerating them of past accused malpractices. In May 2018, it was finally the turn of the legendary one-time heavyweight champion of the world, Jack Johnson, the first African-American to reach the apotheosis of boxing but who had been condemned by an unjust law.

On 31 March 1878, John Arthur ‘Jack’ Johnson, the man who would come to be known as ‘The Galveston Giant’, was born in the Texan coastal town from which his moniker derived.

The third of nine children, quite remarkably, Jack Johnson would rise to the top of the world when the repressive Jim Crow laws were in full effect in the United States, his individual story an anomaly of a narrative within racially-segregated society that both amazes and shames to this day.

Johnson was 60 when he finally hung up his gloves professionally, finishing with a career record of 73 wins, 13 losses and 10 draws. He died as a result of a traffic collision in Raleigh, North Carolina, at the age of 68. Eight years after his tragic death, in 1954,  Johnson was inducted into the Boxing Hall of Fame.

For a system based solely on the concept of white superiority and blackness fundamentally seen as lesser, it can’t be understated how powerful an image and statement it was to have an African-American on top of the world in a sport that demands the most gruelling feats of athleticism and endurance. To succeed when you’re being explicitly instructed not to, to sprint fastest when the most hurdles are placed in front of you, takes some doing.

Johnson was the apex sportsman at a time when a black person couldn’t even accuse a white person of lying, be seen to laugh in their direction, or, heaven forbid, even light a cigarette for a white woman. A time when white people were encouraged to attack without impunity when the laws were believed to have been broken. The Jim Crow era actually had delayed Johnson’s title shot and would ultimately try to tarnish his legacy.

Finally, on 26 December 1908, Johnson - at the time the World ‘Coloured’ Champion’ - had his moment, defeating Tommy Burns in Sydney, Australia to become the World Heavyweight Champion.

On 18 October 1912, Johnson was arrested. He was travelling with the (white) woman who would become his second wife, Lucille Cameron, the tentative Mann Act - which hadn’t yet passed - levelling that the boxer was “transporting women across state lines for immoral purposes”, with Cameron accused of being a prostitute. Though the case was dropped, Johnson was arrested again just a month later in the company of Belle Schreiber. Schreiber however, testified against Johnson, leading to him being sentenced to a year and a day in prison.

As Johnson himself commented, “The search for the white hope not having been successful, prejudices were being piled up against me, and certain unfair persons, piqued because I was champion, decided if they could not get me one way they would another.” 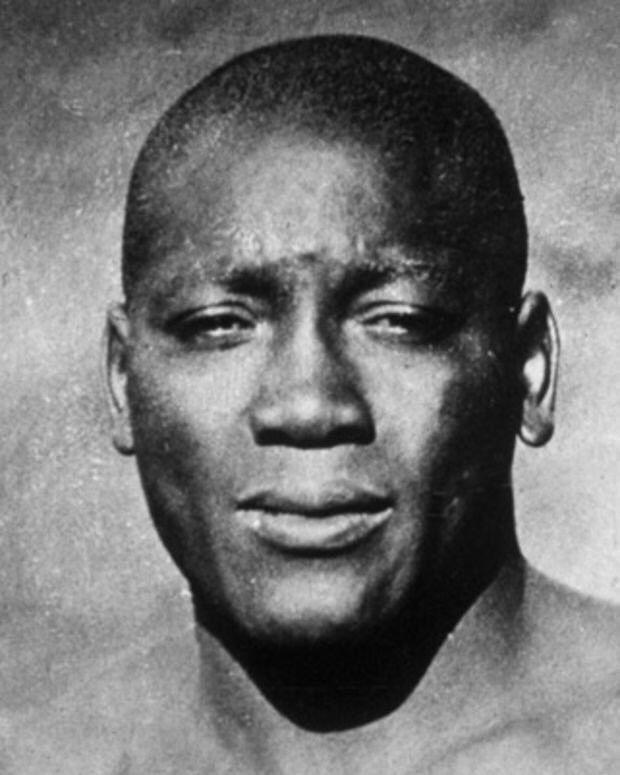 The ‘Great White Hope’ had come in the form of the undefeated ex-heavyweight champion James J. Jeffries, anointed by the white American public to knock Johnson from his lofty perch and bring pride back to the race by returning the title. On 7 July 1910, Johnson and his compatriot Jeffries faced off in the downtown ring for the World Heavyweight Championship, in Reno, Nevada.

Jeffries came out of a six-year retirement for a bout that would be labelled quite bombastically as ‘the Fight of the Century’. His subsequent loss to Johnson would be the first and only of his career, the two knockouts he suffered being an entirely new experience for Jeffries, and it would ultimately be the last time he stepped into the ring as a professional pugilist.

Johnson later stated that he realised the fight was over as early as the fourth round. Landing an uppercut to Jeffries' face, Johnson said he saw the look in his eyes. "I knew what that look meant. The old ship was sinking."

Eventually, Jeffries' corner threw in the towel in the 15th round.

For his first ever fight, Johnson took a prize purse of $1.50. For his win over Jeffries, Johnson was awarded an eye-watering $65,000, the equivalent of around $1.5m in today’s money. However, riots and racial clashes were also triggered across the United States.

Just three years after that victory, Johnson was a man on the run having broken his bail conditions in the aftermath of the Schreiber case. He moved abroad with Lucille, travelling around Europe and South America, not returning to the US to serve his sentence for another seven years. He was released on 9 July 1921.

Johnson purportedly revelled in the controversy his racial relations brought, with all three of his documented marriages being to white women. He also owned a mixed-race nightclub on Chicago's South Side, ‘Cafe de Champion’. The filmmaker and documentarian Ken Burns stated in his documentary about Johnson’s life, ‘Unforgivable Blackness’, that “for more than 13 years, Jack Johnson was the most famous and the most notorious African-American on Earth”.

A full 72 years after Johnson’s tragic death in a car crash, and well over a century after he was convicted of an unjust crime by an all-white jury, President Donald Trump signed the presidential pardon conceding the historic wrong. It was an act over a decade in the making, with the movement to grant Johnson a presidential pardon beginning in 2008. The bill had passed the House of Representatives, but still, 103 years after the racially-motivated charge, was denied in the Senate.

Upon the eventual decree in 2018, Johnson’s great-great niece informed the President, "For so long, my family was deeply ashamed that my uncle went to prison. By this pardon being issued, that would help to rewrite history and erase the shame and the humiliation that my family felt for my uncle, a great hero.”