Football
Features
The 19-year-old has added a new edge to United's play down the left under Solskjaer
Graham Ruthven
07:00, 07 Jan 2020

When he arrived at Manchester United as a £30 million 18-year-old England international, Luke Shaw was meant to be the Red Devils’ left-back of the next generation. Five-and-a-half years later there is another teenager wowing the Old Trafford crowd, and threatening to make Shaw a thing of the past at the Theatre of Dreams as a result.

Brandon Williams was initially thrust into Ole Gunnar Solskjaer’s side through necessity, with Marcos Rojo, Shaw and Ashley Young all suffering from injury earlier in the season. But the 19-year-old fully grasped that opportunity, and has usurped Shaw as United’s new long-term left back.

Of course, Shaw has had something of a hard-luck story since arriving in Manchester in 2014. His first season was frustrated by regular niggling injuries, his second decimated by a sickening leg break just as he was beginning to show his true quality. When he returned, Jose Mourinho was his new manager but the Portuguese’s particular brand of tough love seemed to be of greatest detriment to Shaw of all United’s players.

A brief return to form in 2018-19 was rewarded with a new four-year contract and by the end of the season Shaw was being named United’s Sir Matt Busby Player of the Year. But just eight months on, his future looks uncertain again thanks to the rise of Williams.

The Manchester lad is the quintessential modern full-back. He provides a contrast to Aaron Wan-Bissaka on the right side of the United defence - while Wan-Bissaka is one of the best defensive full-backs in the game, Williams is an attacking force, often breaking beyond the frontline to disrupt the opposition.

Perhaps most importantly, Williams already looks to have struck up an understanding with Anthony Martial and Marcus Rashford. They both play better when the former Under-18s captain is on the pitch. He's a humble, understated young man too, which means he's always paying attention and willing to learn. His manager could not be a bigger fan.

“He’s never let us down,” Solskjaer gushed after a particularly impressive display from Williams in the 2-0 win over Burnley at the end of December. “He’s a top young kid, he’s got great attitude and confidence. He’s got everything a Man United kid should have.

“You’re never scared of putting Brandon in any type of game. He’s a kid you want to help, he’s got everything physically, he’s one of our own. He’ll just get better and better. He’s got his best years ahead. He’s been a leader this season and shown great maturity.” 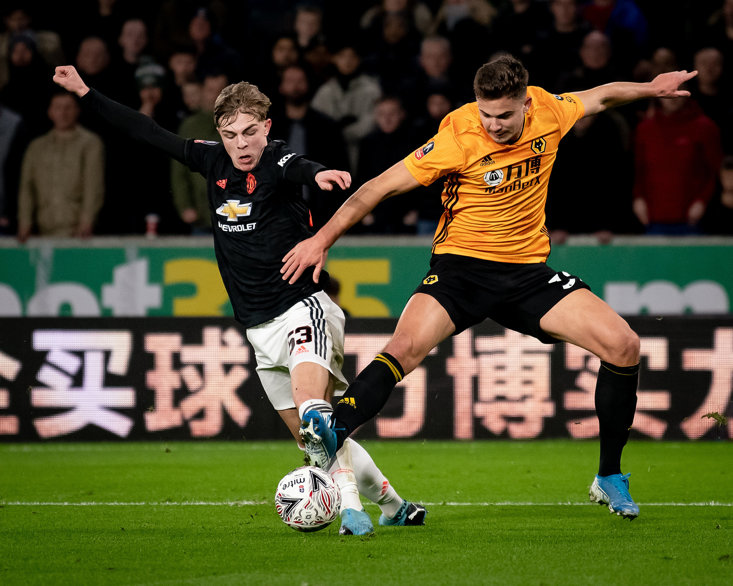 It was Williams who sparked a comeback from 2-0 down at Sheffield United with a deadly first-time strike which led a magnificent seven-minute, three-goal spree which had seemed more than unlikely until the full-back’s intervention.

Latterly, he has been able to show that he has what it takes to match one of the most rampant wingers in the Premier League with his performance against Adama Traore in the FA Cup draw at Wolves on Saturday.

“He’s not giving me headaches, he’s giving me a nice decision to make,” Solskjaer told his post-match press conference at Molineux. “Brandon played against one of the quickest, strongest wingers in the Premier League, the one with the most dribbles in the league, and Brandon did fantastic.

“He’s just improving day by day. He’s keeping his feet on the ground and he’s always ready when called upon.”

Solskjaer is right to praise Williams so emphatically. It’s been years since Man Utd had a left-back who gave them such an outlet down that side of the pitch. Both Shaw and Young struggle to get up and down and so the teenager’s mobility has given him an edge over the competition in the Old Trafford dressing room.

Of course, there are still areas of his game in need of development. Williams remains somewhat vulnerable when facing his own goal and as a teenager he is lacking on the physical side. Over the hectic Christmas period, for instance, Solskjaer had to rotate Williams in and out of his team purely because the 19-year-old would have suffered fatigue more than most. And there is, of course, the inevitable question of consistency in a team full of younger stars.

When fit, though, Williams must now be considered Man Utd’s starting left-back and there is every reason to believe that will be the case for years to come.