Across all sport, few events, if any, inspires unity and collectivism in the same way the Olympic Games opening ceremonies do. Nations across the globe congregating together for a celebration of peace, joy, nationalism, and athletic heroism - such an occasion always deserves the most glorious of red carpets.

Over a century’s worth of Olympic Games opening ceremonies, with countries stretching the globe providing the dazzle to announce the commencement of most prestigious and gruelling competition, making sure their city, their country is illuminated, and their place in sporting history is cemented, there have been some incredible highlights. Here are five of the most memorable moments. 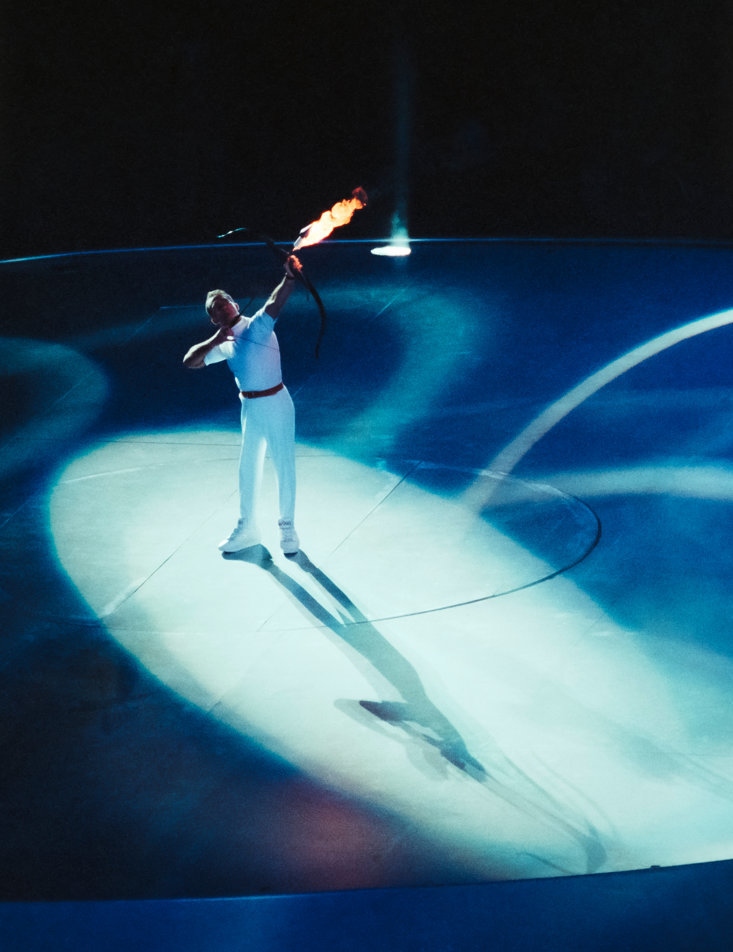 Talk about holding your nerve. Barcelona 1992 culminated in the most dramatic of Torch lightings, when native Paralympic archer Antonio Rebollo held out his bow for his arrow to be lit by the journeying flame as it made its way through the Estadi Olímpic de Montjuïc in Catalonia, where it would be fired high and true to announce the Games had begun. The beautiful moment, however, almost didn’t happen, with Rebollo in danger of being overawed by the sheer bombast that Barca had brought.

“I didn’t get to see when the torch arrived into the stadium,” Rebollo later regaled, “but only when it was time for me to come out with my bow, when [Spanish basketball player] Juan Antonio San Epifanio was carrying the torch.

“I see him running in the middle of all the athletes towards where I am standing, and that is when I got slightly distracted, because everything was dark.

“All I can see is the lights that were given to the spectators in the stadium. With all the bustle from the crowd, I was trying not to lose my concentration so I got fully focused.

“I remember that [San Epifanio] got on the platform and he starts a rotation to show the torch to the public.

“And that’s when I got into auto-pilot.”

Mercifully, the Apollo-like Antonio aimed for the heavens and his arrow flew beautifully into the cauldron, consequently creating one of the most serene, sensational moments Spain would offer. 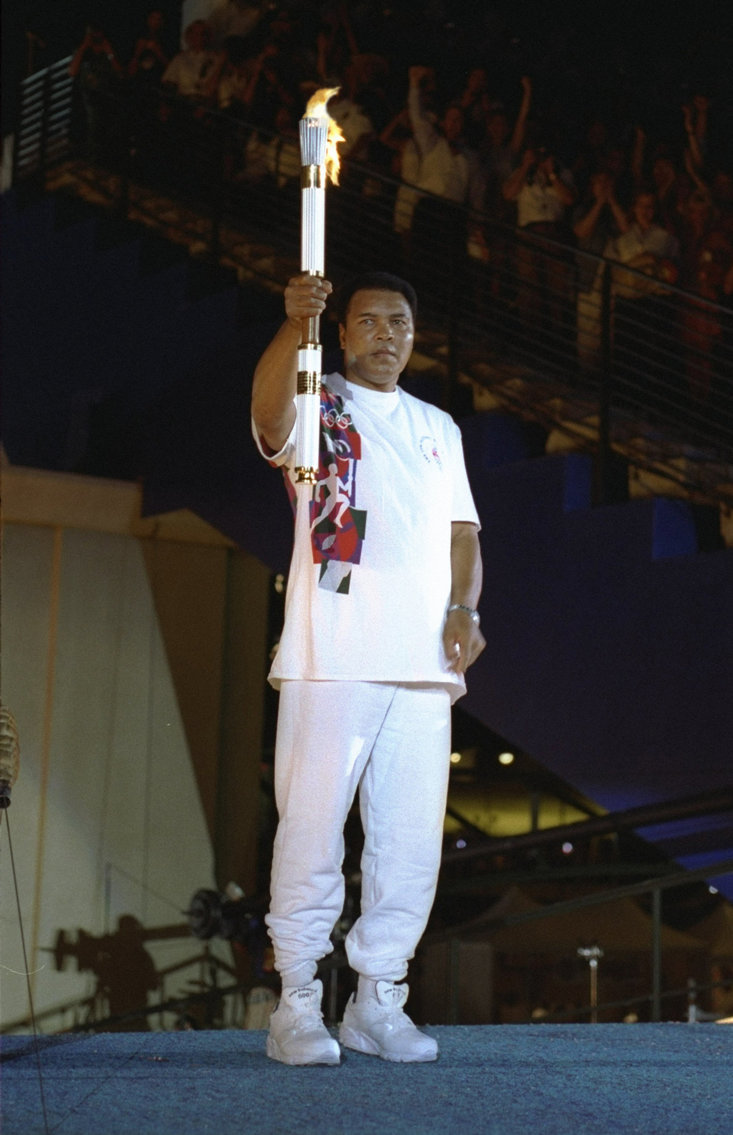 “Once the most dynamic figure in sports - a gregarious man now trapped inside that mask created by Parkinson's Syndrome. So in one sense a poignant figure, but look at it - still a great, great presence, still exuding nobility and stature. And the response he evokes is part affection, part excitement, but especially respect. What a moment.”

NBC commentator Bob Costas immortalized the already-immortal Muhammad Ali, as the great boxer, shaking, frail, but still stronger than anyone in attendance shuffled towards the fuse that would light the Torch at the 1996 Atlanta Games, taking place 36 years after he earned his Olympic gold medal and 12 years after he was diagnosed with Parkinson’s disease. 3.5 billion people worldwide watched the flame sail up to the grand tower to ignite the cauldron overlooking the Centennial Stadium in Georgia.

The Olympics had produced yet another iconic moment from the greatest icon of them all.

James Bond and the Queen 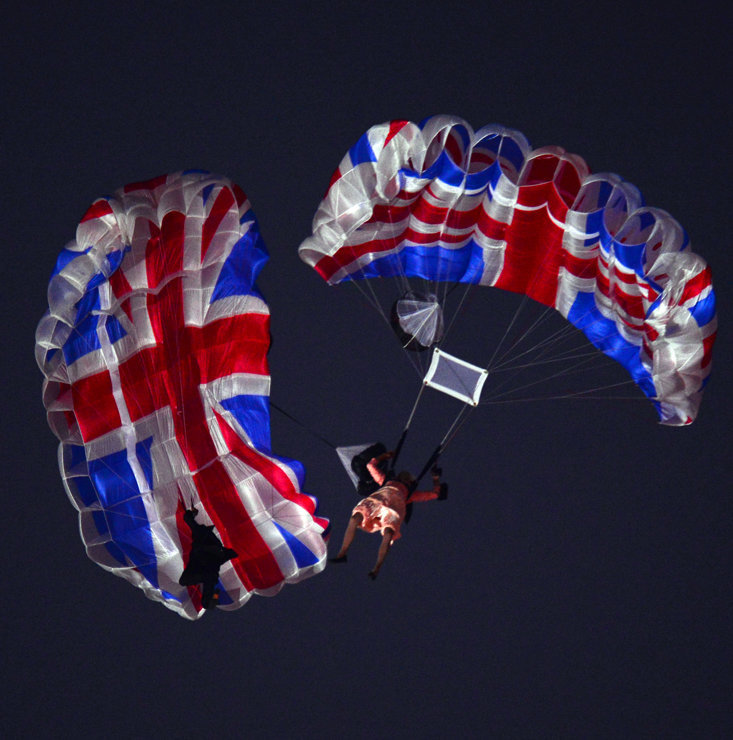 The 2012 opening ceremony may well be seen as esteemed Oscar-winning director Danny’s Boyle’s magnum opus. From the auteur being announced as the artistic director, Boyle outlined he would be working with a budget about a quarter of the cost of the Games four years before, at around £27m, whilst having the inevitable task of emulating perhaps the most vivid and awe-inspiring opening ceremony in living memory.

Boyle made every penny and every performer - human and beast - count. From the moment Bradley Wiggins bonged the bell to direct a young choir to launch into Jerusalem, Danny Boy, the Flowers of Scotland, and Bread of Heaven, and Sir Kenneth Branagh to emerge (as a last minute replacement for Mark Rylance) in the form of Isambard Kingdom Brunel to spout Shakespeare’s soliloquy from The Tempest, Boyle’s Britain vision was glorious. Never work with children or animals? Pah!

Boyle had stated that his first Olympic memory was Bob Beamon jumping out of the pit at an incredible s29-2½ feet (8m90) at the Mexico City Games in 1968, and over half a century later, for a whole generation it was another jump, this time orchestrated by Boyle, that will prevail in collective consciousness. When the action cut away from Stratford to Buckingham Palace to show Daniel Craig’s James Bond being allowed into Her Majesty, The Queen’s office, another rolled out look-a-like of the head of state would be forgiven to be expected.

“Good evening 007,” declared the actual Queen Elizabeth II, and with that the pair took off in an awaiting helicopter, soaring through the capital to the Olympic Stadium before jumping out and parachuting to the ground to the tune of John Barry and Monty Norman’s iconic score. Brilliant.

Los Angeles '84 And The Jetpack 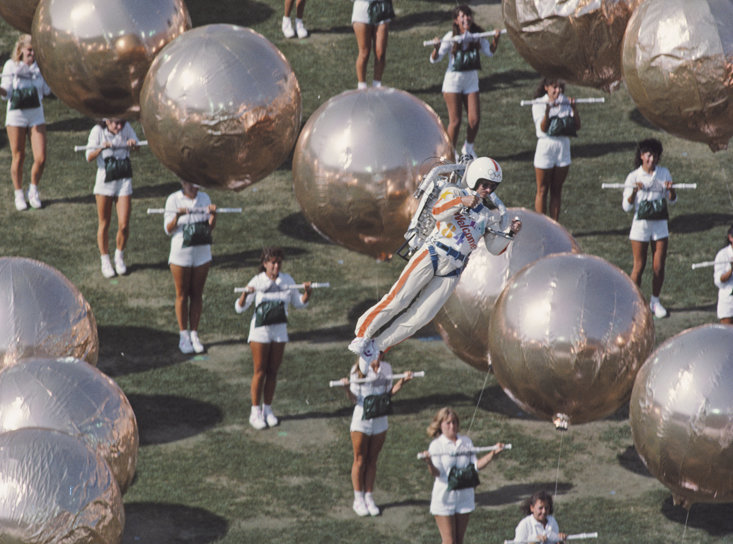 The Russians weren’t at the 1984 Olympics in Los Angles, because the Americans had refused to attend the 1980 Olympics in Moscow. The reason the Americans stayed at home? They were protesting about the Russian invasion of Afghanistan. Seriously, how they kept a straight face during Operation Desert Storm is anyone’s guess. Nevertheless, the Russian missed one of the finest moments in any event, anywhere in the world, ever: Jetpack man.

In front of a packed 100,000 strong crowd, Bill Suitor, resplendent in an American Flag jumpsuit that put Evel Knieval to shame, launched from the top of the stadium and rocketed into the air, shooting around in a large arc along the running track, before landing perfectly on a small white circle. It was Bond in Thunderball. It was Buck Rodgers in the 21st Century. It was bloody brilliant.

"That thing literally exploded off that stage. I have never had it take off like that in my life," Bill said when he realised he was still alive. Mr Suitor, we salute you. 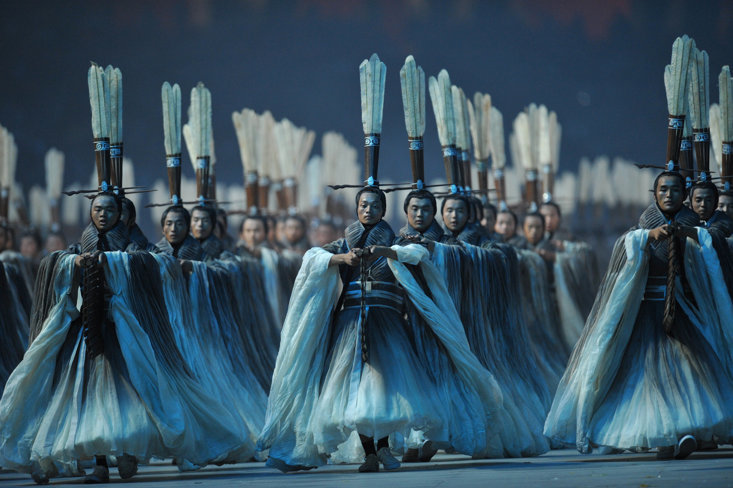 Where do we start? Seriously terrifying and awe-inspiring in equal measure. Based in the Chinese capital you knew a helluva lot of fireworks would be involved, but the sheer scale and amount of them was simply astonishing.

Featuring 15,000 performers, and costing an eye-watering $100million, Beijing ‘08 didn’t just raise the bar, but has likely set the standard for similar stages for the next century. 2008 will no doubt be talked about in 2108. Everyone will likely have a particular moment, through the two segments of the ceremony named ‘Brilliant Civilisation’ and ‘Glorious Era’.

At the now-iconic Bird’s Nest stadium, breath couldn’t help but be taken away as the flame was passed on to former Olympic gymnast Li Ning. Li, to the shock and delight of the audience, appeared to spontaneously jettison off into the air, before circumventing the inside-roof, skywalking spectacularly around the arena’s neck suspended by wires, then appeared to run horizontally along the top of the stadium and lit the Olympic cauldron. A nation of over 1.3billion people has produced the grandest of opening ceremonies.