Daytona International Speedway, Valentine’s Day, 1988 and the sound is deafening. A 13-strong, V8 powered NASCAR line-up of rolling thunder hurtles around the 2.5-mile circuit at close to 200mph. Five laps to go. The tuned engines roar almost as loudly as the capacity 160,000 fans clutching at the fences and the cars slot into line, slipstreaming their way ever faster towards a place at the front, the chequered flag and eternal Daytona 500 glory.

In his Number 28 Buick, 27-year-old Davey Allison works his way through the pack until he is sitting just behind the race leader, both cars less than a foot from each other; beaten lumps of steel, sweat and engine travelling at the same speed as the Japanese bullet train.

Two laps to go. Time is running out if Davey is going to make a move. He pulls as close to the car in front as he dares and the huge Miller sponsor lettering ‘High Life’ emblazoned on the rear of the leading Number 12 Ford fills his cockpit screen. Now his life is quite literally in the other driver’s hands: If the lead car blows a tyre, clips a wall or even just makes an aggressive defensive move, their proximity is enough to wipe out both in a heartbeat.

But Davey trusts the lead driver. He knows him as well as anyone. Known him his whole life. Because that man is Bobby Allison, Davey’s dad. The pair are setting Daytona history. No father son duo has ever crossed the finish line numbers one and two, and Davey has no intention of going into the history books as second.

“Now, are you going to honour your father at the end of this, if it gets down to that?” a commentator had asked Davey at the start of the race. The response was immediate: “Not if I can help it."

One lap to go. Davey follows his dad in turn two high against the wall, catching as much speed as he can and then, suddenly, as they roar into turn three, he pops his car out into clear air. "Oh Davey, what you gonna do?" gasps the commentator.

Davey knows what he’s going to do. Win. He pulls briefly alongside his dad and then he’s gone, hurtling away like a screaming Spitfire into the final turn. All or nothing. The Allison family way.

“You got all kinds of emotions going there”, explained Judy Allison, Bobby’s wife, in a 2011 NASCAR Hall Of Fame documentary. “It’s your husband, it’s your son… somebody walked up to me and said ‘well, who are you pulling for?’ I said, ‘the one who pays the bills’, what else can you say?”

If he could just hold his son off for this final attack, the one who paid the bills was about to set a second record because even by NASCAR standards, where big beaten up old cars tend to resemble their drivers in much the same way weathered dogs look like their owners, Bobby Allison was old. Born in 1937 and having celebrated his 50th birthday three months earlier, Bobby had long cemented his reputation as a racing legend by the time of the ‘88 Daytona 500.

In 1979, at the same circuit, he watched his brother, Donnie, tangle and crash with Cale Yarborough on the final lap. Bobby finished the race, then in true Southern style drove back around the circuit to join his brother in the ensuing fist fight. It was all in a day’s work. Recalling the outcome, Bobby always insisted he wasn’t to blame and that Cale simply, “ran his nose into my fist several times”.

In 1987 at Talladega, the year before he found himself being tailgated by his own son, Bobby’s car had dramatically defeated gravity, lifting off the ground at 210mph, spinning while airborne before smashing into 100 yards of protective fencing. It’s just part of a career that would see Bobby become one of the greatest NASCAR drivers of all time, becoming inducted in the Motorsports Hall Of Fame in 1992 and the NASCAR Hall Of Fame in 1993.

But right now, at the 30th Daytona 500, with half a lap to go, Bobby watches his son make his move, and keeps his nerve. A younger driver might have put in a knee-jerk defence, but Bobby doesn’t flinch from the racing line and Davey, now low in the turn and no longer slip-streaming, runs out of speed and has no choice but to slot into second place again as they cross the line. It’s over. Three Daytona wins for Bobby, the oldest man to win at Daytona and the first father/son, one/two win at Daytona. History had been made several times.

“You know when I was a little kid I always dreamed about racing with my dad and having a one-two finish but…I wanted him to be second”, laughed a beer soaked (by his dad) Davey after the race. And even though he won, for Bobby, it felt like the changing of the guard.  “I could see the nose of Davey’s car out of the corner of my eye. It was a great feeling at the finish to look back and see somebody you think is the best coming up in the sport and know it’s your son.”

Bobby Allison is still alive today, but he doesn’t remember a single minute of that ’88 victory. Halfway through that same season he was in a crash that nearly killed him and ended his racing career. Declared dead on arrival at the hospital, Doctors saved his life, but they couldn’t save his short-term memory. Davey died at Talladega in 1993. 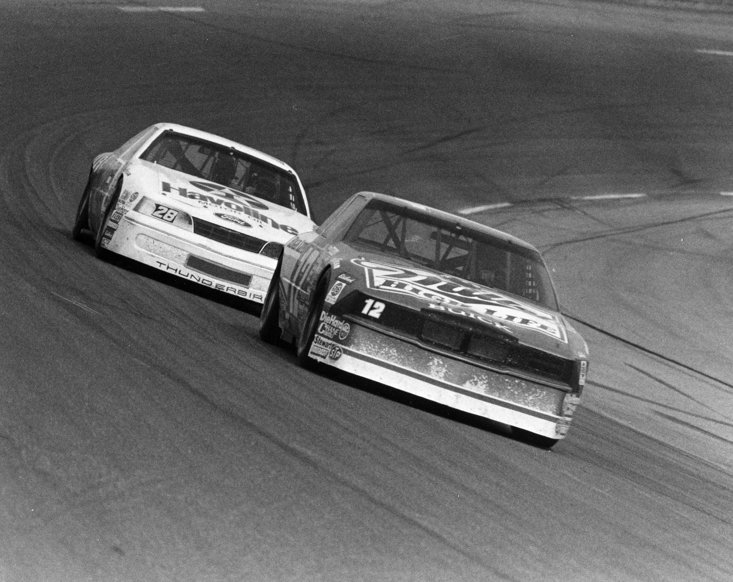 x
Suggested Searches:
Tyson Fury
Manchester United
Marcus Rashford
Lewis Hamilton
F1
Air Jordan
More
football
You Can't Blame Messi For Dropping Not So Subtle Hints To His...
There they are, the group celebration shots. There’s the training images too. Scroll a little [ ... ]
motorsport
How Mick Schumacher Used Fake Names And Ace Moves To Follow...
In the year 2000, the greatest racing driver in the world introduced his son, aged just one, to the [ ... ]
boxing
Inspirational Anthony Yarde Looking To End Harrowing 2020 With...
Anthony Yarde has one focus, and that’s knocking out Lyndon Arthur when the pair meet in their [ ... ]
boxing
Now Or Never For Billy Joe Saunders, It's Time To Step Up And...
Controversial but supremely-talented WBO super-middleweight champion Billy Joe Saunders fights for the [ ... ]
football
Lionel Messi The Younger, The 'Tiny Little Thing' That Took...
It is December 2000. Three men have congregated in the Pompeia del Montjuic tennis club cafeteria. One [ ... ]
boxing
Self Confident And Self Aware, ‘King Arthur' Is Relishing Anthony...
Lyndon Arthur is quick to interject even if we are reeling off a list of his impressive boxing credentials [ ... ]
football
Everything You Think You Know About José Mourinho Is Wrong
It’s 20 years now since José Mourinho first tried his hand at football management. A journey [ ... ]
boxing
The Secrets Behind Anthony Joshua’s Gruelling 14-Hour A Day...
Anthony Joshua is a man mountain of a heavyweight champion, standing at 6’6 and weighing in at [ ... ]
us-sports
Remembering ‘The Big Cat’: The NBA Icon Who Paved The Way For...
At the last census, across 30 different franchises, just under 75% of National Basketball Association [ ... ]
football
£9M Deals And 2.7M Insta Fans, It's The Top Teens In European...
Youssoufa Moukoko made history in November, becoming the youngest player ever in Bundesliga history, [ ... ]
football
Bugattis, Ferraris, Lambos, Top Five Motors From Ronaldo’s Insane...
On paper, Cristiano Ronaldo has everything. A chiselled body, a giant mansion and a delightful family [ ... ]
motorsport
First Men In: Jennie Gow Talks To The Heroes Who Pulled Grosjean...
When the first responders, Dr Ian Roberts and Alan van der Merwe, pulled up to the stricken Haas car [ ... ]
boxing
The Home Of The $1BN Boxing Deal Lands In The UK, All You Need...
Are you ready to get into DAZN? Finally, it’s sunlight for the British-based blockbuster subscription [ ... ]
sports
Feast Your Eyes On Our Five Fantasy Gifts For The Fitness Fanatic...
Every family’s got one, the fitness fanatic. The one who’s a slave to the strava, the one [ ... ]
cycling
How Emily Chappell Went From Courier To Conquering The 4,000km...
Emily Chappell was once an imaginative inner-city courier, who thoroughly enjoyed riding round metropolitan [ ... ]
sports
Bow Down To Keegan Hall, The Artist Behind This Amazing Drawing...
With just a handful of pencils, a $5 sheet of paper and a whole lot of talent, Keegan Hall blew up the [ ... ]
football
Money, Moods And Mario: Micah Richards On Life At Manchester...
Micah Richards has admitted that Manchester City’s takeover more than a decade ago split the dressing [ ... ]
sports
Big Waves, Exotic Dancers, The Life Of UK’s First Pro Surfer,...
Hawaii is a lost paradise. Ted Deerhurst was drawn there as a dreamer. It was his Mecca, the ultimate [ ... ]
football
With 313 Goals Between Them, It's Football's Greatest Ever Goalscoring...
It’s one of the sights which makes football fans giddy, a goalkeeper striding up for a corner. [ ... ]
boxing
Anthony Joshua And Me: Legendary Team GB Coach Reveals All About...
“He was shaking like a leaf!” Paul Walmsley, Anthony Joshua’s former Team GB [ ... ]
sports
Career Ending Dogs And Huge Gatecrashing Alligators, When Animals...
We love all creatures great and small but sometimes pesky critters and colossal creatures, [ ... ]
rugby
Wales Face Strong England Against A Backdrop Of Departures,...
It has been 20 months since Wales lifted the Six Nations trophy as Grand Slam champions. Wayne Pivac [ ... ]
boxing
The Mike Tyson Interview: ''Living Takes A Lot Of Courage''
Mike Tyson’s life has been a well-documented roller coaster ride. A difficult childhood, then [ ... ]
football
The Secret Boot Camp And Drills That Made Marcus Rashford The...
If we’ve learned one thing about Marcus Rashford in 2020, it’s that he doesn’t rest [ ... ]
boxing
35 Years Of Rocky IV, 10 Hard-Hitting Facts About Balboa’s Greatest...
Can you believe it’s been 35 years since Sylvester Stallone’s Magnum Opus, Rocky IV, premiered [ ... ]
sports
How The Art Of Ice Climbing Saved The Life Of Teenage Drug Addict...
At just 12 years old, Margo Talbot was using drugs and drink to help medicate her juvenile depression. [ ... ]
boxing
When's It On? How To Watch? Why No Knockouts? Your Tyson-Jones...
Haters gonna hate. For Taylor Swift 2014, read Mike Tyson 2020. He’s back in the ring this weekend [ ... ]
sports
Ruqsana Begum, The Kickboxing Champ Who Kept Her Career A Secret...
Muay Thai kickboxing isn’t for the faint of heart. Pain is a bedfellow. An adrenaline-fuelled [ ... ]
sports
Meet The Man Who Can Hold His Breath For 7 Minutes And Freedive...
“The look, of love….is in your eyes...”  One hundred metres underwater, with [ ... ]
boxing
Anthony Joshua's £1M Car Garage Boasts A Stretch Roller And...
Killer speed, energetic and ferocious, Anthony Joshua’s car collection is just like his boxing [ ... ]