Football
Features
How is the Leicester talisman better than ever at almost 33 years old?
Jack Porter
16:20, 09 Dec 2019

The age at which Liverpool legend and former Ballon d’Or winner Kevin Keegan retired. France’s first World Cup-winning captain Didier Deschamps had already called it a day at that point in his life. Dutch behemoths Frank Rijkaard and Marco van Basten had stopped even younger, at 32 and 31 respectively, the latter having not played for the previous two years after being beset by injury. Manchester United King Eric Cantona? Forget about it, the Frenchman had already packed it in by that point.

A month away from turning 33, he is far and away the Premier League’s top goalscorer in 2019/20 with 16 goals in 16 matches, five more than Chelsea’s Tammy Abraham (a player 10 years his junior). He is one of the driving forces behind the Foxes’ best run of form since their title-winning campaign of 2015/16.

Quite impressive for a forward who unabashedly revealed that he existed on a pre-match diet of fags, Red Bull, and Port from a Lucozade bottle.

“I can't say why it started, because I genuinely don't know, but I decided to drink a glass of port on the eve of every game in the 2015–16 season,” Vardy stated in his autobiography in the aftermath of that title triumph, “I fill a small plastic water or Lucozade bottle to halfway and just sip the Port while watching television.

“My diet is not unorthodox. I just eat like anyone else - that's just how I am.” 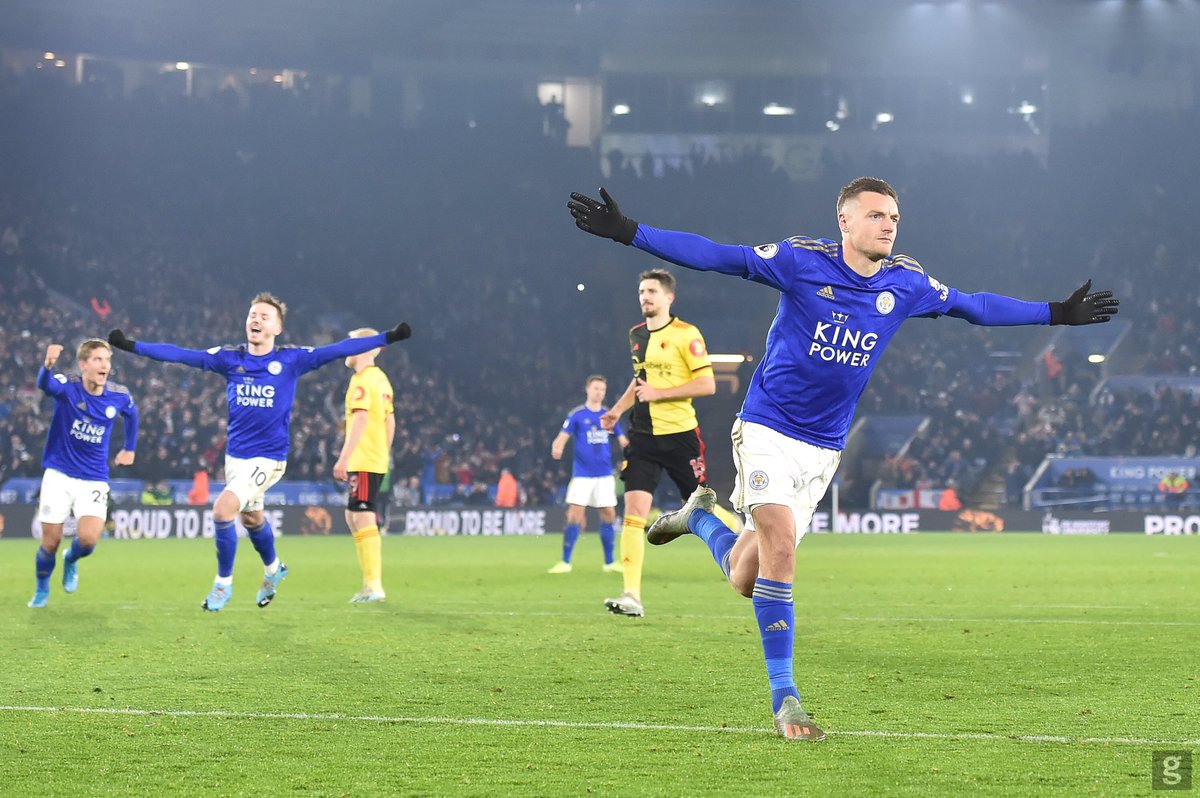 But is it how he still is? To many Vardy is a changed man under Brendan Rodgers, with the Red Bull and Port believed to be a thing of the past. But on the field he's different too, he has become a different style of forward to the one peeling off the shoulder of defenders for Claudio Ranieri’s historic title-winners, and is scoring at an even greater rate now.

With his brace in a 4-1 win at Aston Villa, Vardy became just the second player in Premier League history to score in eight successive games on two separate occasions, after Van Nistelrooy did so with the Red Devils in January 2002 and August 2003. He’s the first to hit the mark since he did it himself with than 11-game run in the Ranieri era.

It is the adaptation of his game that is most striking though. Once upon a time he relied on pace, sneaking in behind the lines to take advantage of the high lines of the opposition, latching onto acute balls from Riyad Mahrez, Danny Drinkwater and the ilk.

Now he plays in a forward line which sees pressure provided by younger teammates Kelechi Iheanacho and Ayoze Perez, Vardy embodying ‘evolve or die’, and being more talismanic than ever as a result. He is truly making the most of a superb supply from Youri Tielemans, Harvey Barnes and James Maddison, with the focus on more intricate, swift, aesthetically pleasing movement under Brendan Rodgers.

Premier League
@premierleague
It's party time… 🎉
@vardy7 is your @EASPORTSFIFA Player of the Month for April!
#PLAwards @LCFC
414
3659

With every passing week, the Foxes are convincing more and more people that they are the most viable candidates to deny Liverpool their first-ever Premier League title. Jurgen Klopp’s Reds are currently undefeated and sitting pretty snug at the summit, leading the way by eight points.

Since a controversial narrow defeat to the leaders at Anfield, Leicester have galloped to eight league victories on the bounce. Not only do their put the rest of the top tier’s defences to shame (they a league best seven clean sheets so far, with Liverpool the only side to score more than one goal against them), but they’re being spearheaded by an evergreen Vardy.

Proving people wrong is his speciality.

Whilst players such as Mahrez, Drinkwater, and N’Golo Kanté jumped ship after bathing in the glow of the most surprising of title victories, Vardy resisted the overtures of Arsenal, a decision that has looked more and more sensible as this particular season has progressed.

After their next game at the King Power against struggling Norwich City, two mouthwatering heavyweight clashes with champions Manchester City and apparent champions-elect Liverpool await for second-placed Leicester.

Vardy is in such a thick vein of form that he is a clear favourite to finally claim that Golden Boot come the end of the season, but Leicester should have full confidence in facing the sides they’re coming up against thanks to their mercurial number nine. Who better to certify that that 15/16 season wasn’t an anomaly than the man who is adept at proving it about himself.

Red Bull or no Red Bull, Vardy has given Leicester their wings this season.

More
football
President Vs Player: One Year On From Rebel Rapinoe Being On...
"I'm not going to the f*cking White House. No, I'm not going to the White House. We're [ ... ]
tennis
The Day A Flawless Fred Perry Stormed Wimbledon To Win A £25...
“Packed Centre Court sees strenuous struggles for Championships!’ screamed the Pathé [ ... ]
boxing
Five Unmissable Big Screen Boxing Masterpieces That Aren’t Rocky...
Like almost no other sport, boxing is tailor-made for the silver screen. There’s something in [ ... ]
us-sports
The Luckiest Man On Earth: When Lou Gehrig Bid A Fond Farewell...
In the Friends episode, The One Where Old Yeller Dies, the character Phoebe Buffay (Lisa Kudrow)  [ ... ]
motorsport
Why NASCAR Maverick Wendell Scott's Battle With Bigotry Is As...
It is less than two weeks after the assassination of John F Kennedy. On the dirt oval at the Jacksonville [ ... ]
sports
From Daring Sea Rescues To Shunning Hitler: The Greatest Acts...
Nothing warms the cockles and brings a lump to the throat as seeing, hearing or regaling acts of sportsmanship [ ... ]
football
Sun, Sand And Bicycle Kicks: The World Of Beach Football Deserves...
The dying minutes of the game, down one goal. Former Liverpool midfielder Jamie Redknapp composes himself, [ ... ]
boxing
From Hammering Holmes To Blitzing Berbick: Mike Tyson’s Five...
With a boxing comeback in the pipeline, a hugely popular podcast and a 400-acre cannabis ranch opening [ ... ]
boxing
Cassius Clay vs The United States: The Greatest Fight Of Muhammad...
On June 20 1967, it took an all-white jury just 21 minutes to find Muhammad Ali guilty of draft evasion. [ ... ]
boxing
Assault In The Ring: The Dirtiest Boxing Match In History
On June 28, 1997, Mike Tyson and Evander Holyfield shared arguably the most infamous night in boxing’s [ ... ]
sports
The Sportsman Interviews Anthony Curcio, Football Player And...
Anthony Curcio is the world’s nicest bank robber. Friendly, talkative and generous with his time, [ ... ]
football
From Van Basten's Volley To Müller Magic: When The Olympiastadion...
It has been 15 long years since a football was kicked at the Munich Olympiastadion in official club [ ... ]
tennis
History Makers, Record Breakers And Pimms: Why Wimbledon Is...
Weep in the realisation that this should have been the week of Wimbledon, arguably the most anticipated [ ... ]
boxing
From Knocking Out A Horse To Missing Gold Medals: Five Of Boxing's...
Boxing has had its fair share of pieces of folklore since the introduction of the Queensberry Rules, [ ... ]
boxing
Joe Louis, The Third Reich And The Most Politically Charged...
On June 22, 1938, with the world on the brink of war, two boxers from opposite sides of the Atlantic [ ... ]
motorsport
Fighter Pilot, Racer, Transgender Pioneer: The Brave Life Of...
Robert Cowell was naturally left-handed but forced to use the right at a young age. The child of a decorated [ ... ]
boxing
Blood, Guts And Determination: Remembering Lewis And Klitschko's...
After 44 fights, 41 victories, 32 knockouts and three heavyweight championships, on June 21, 2003, Lennox [ ... ]
boxing
The Brawl In Montreal: Sugar Ray Leonard’s Rude Awakening At...
Four decades ago, when the ink had dried on Sugar Ray Leonard’s contract to face a Panamanian [ ... ]
football
The Danish Club Giving Locked Down Fans The Ultimate Virtual...
English football fans got their first taste of the ‘new normal’ this week as the Premier [ ... ]
mma
Prevention Better Than Cure - Confronting Head Trauma In MMA,...
Oh, the ignominy. ‘Baby’ Jay Dee ‘The Prodigy’ Penn, an inspirational martial [ ... ]
sports
From Keano Vs Big Mick To Chicken Wing-Gate: When Players And...
The wonders of the modern world: the Taj Mahal; Kiyomizu Temple; Fenway Park. The home of the Boston [ ... ]
football
Henry, Rodgers And Klopp: Remembering Liverpool’s Love Affair...
“We're here to win,” declared Mr. John W. Henry, in November 2010.  The Liverpool [ ... ]
golf
Flying Kicks, Epic Insults And Hilarious Advice: The Very Best...
“He is who he is. You can ask him about anything and he’s never going to short-change anybody. [ ... ]
motorsport
James Hunt: The Motorsport Maverick With The Playboy Persona
James Simon Wallis Hunt was born on August 29 1947 in Belmont, Surrey. The seventh British man to win [ ... ]
football
The Wrath Of Oliver Kahn: Germany's Greatest (And Angriest)...
'Der Titan'. 'Vol-kahn-o'’.  In order to get on his good side, we’d [ ... ]
sports
From Babe Ruth To Canadian Icons, The Five Priciest Pieces Of...
On June 19, 2019, a rare game-worn shirt from the Sultan of Swat himself, Babe Ruth, sold for an eye-watering [ ... ]
us-sports
Shoes, Rings And Billions: Michael Jordan's Chicago Bulls Revolution
On June 14, 1998, Michael Jordan won his final NBA Championship with the Bulls. Six months later, he [ ... ]
sports
Meet The Man Who Climbed Everest, Partied For A Week, Then Climbed...
There’s nothing normal about Nirmal Purja. After realising that the record time for conquering [ ... ]
football
Stadiums, Prodigies And No Diana Ross: Why We Can't Wait For...
On the surface, 2014 wasn’t much different to today’s world of 2020. There was a space exploration [ ... ]
us-sports
Phil Jackson, The NBA's Zen-Master And Its All-Time Greatest...
“Not only is there more than life to basketball, there’s a lot more to basketball than basketball.” [ ... ]
This website uses cookies
Cookies help us and our partners provide statistics. By browsing this website, you consent to the use of cookies in accordance with our Privacy Policy and Cookies Policy.
Accept & Close