Football
Features
The Reds are having to balance the Carabao Cup with the Club World Cup this week
Elliott Bretland
17:05, 17 Dec 2019

Liverpool are set to field their youngest-ever team in a competitive fixture when they take on Aston Villa in the Carabao Cup on Tuesday night.

With the Reds’ participation in the Club World Cup clashing with the League Cup quarter-finals, Jurgen Klopp has elected to take his senior side to Qatar.

Under-23s coach Neil Critchley will oversee a second-string side at Villa Park to ensure Liverpool honour their fixtures domestically.

Here, The Sportsman profiles six of the young Reds expected to feature in the match.

The Irishman is no stranger to the competition having already played two League Cup games this season.

Kelleher played in the Reds’ 2-0 victory over MK Dons before being given the nod between the sticks again for the epic 5-5 draw with Arsenal, saving a Dani Ceballos penalty as Liverpool won 5-4 on spot-kicks to set up tonight’s tie with Aston Villa.

He was an unused substitute in last season’s Champions League final victory over Tottenham.

Still only 17, the Dutchman has been tipped for a giant future in the game.

The centre-back arrived from Ajax in 2018 and scored in the win at MK Dons, making him the fourth-youngest goalscorer in the Anfield club’s history behind Ben Woodburn, Michael Owen and Jordan Rossiter at 17 years, eight months and 10 days.

It will be hoped he can replicate the rise of his compatriot Virgil van Dijk to become a long-term option at the back for the Reds.

Another defender from the Netherlands, he only turns 18 on December 20 but stands at 6’2”.

A towering, athletic centre-back, he made 15 appearances in the Eredivisie for PEC Zwolle before catching the eye of Jurgen Klopp.

He started the 5-5 game with Arsenal at the end of October, and though the Reds conceded plenty, Van den Den Berg impressed with his positioning and timing. Certainly a huge prospect. 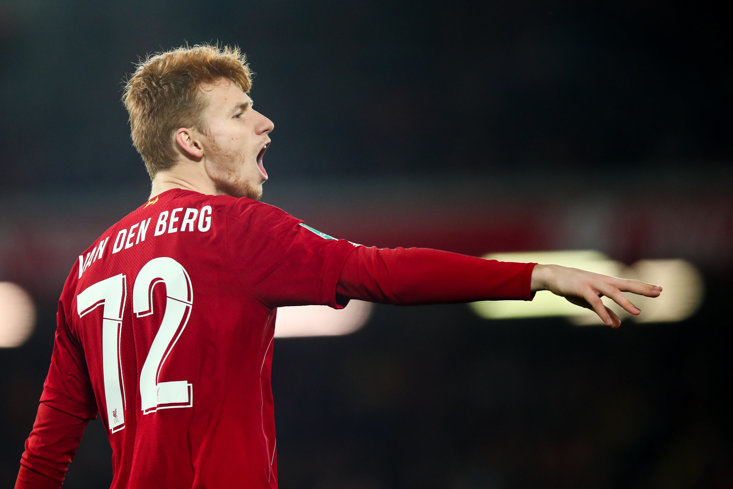 Snapped up from Fulham in the summer, Elliott is another youngster with League Cup connections as he is the youngest player to ever feature in the competition.

Making his debut for the Cottagers at just 15 last September, it is strange to think the playmaker is still only 16 considering he travelled with the Liverpool squad to this summer’s UEFA Super Cup clash with Chelsea.

Likely to be a key player, he will be the creative hub for Critchley’s side at Villa Park.

Already an England Under-17 international, Elliott has all the ability to make the grade as a Premier League regular in a few years’ time.

At 22, Chirivella will be something of a seasoned veteran in this team.

Tipped to captain the team against Villa, Chirivella has been at Anfield since 2015 when he signed from hometown club Valencia.

Tonight will be his eighth appearance for Liverpool having spent time on loan at Go Ahead Eagles and Willem II in the Netherlands before a spell with Extremadura in Spain.

With Rhian Brewster a doubt for the clash, winger Luis Longstaff could be handed a chance to start in one of the attacking slots.

Having played for Newcastle as a kid, though no relation to the Magpies’ brothers who share his surname, he joined the Reds four years ago.

Adept at playing on either wing, the 18-year-old is skillful with neat control and can use both feet to whip balls into the box.

Longstaff has already tasted silverware success having been part of Liverpool’s FA Youth Cup-winning squad in 2019.