As Aston Villa’s summer spending ground to a halt at £133m and Sheffield United splashed out almost £50m, the other newly-promoted club were doing things slightly differently this time around.

At Carrow Road, Norwich City spent just £3.7m, the least amount of money that any newly-promoted side has spent in the last decade and instead decided to trust and reward the players that got them to the Premier League.

Instead of bringing in a plethora of new signings, Daniel Farke and Stuart Webber have gone about their business with a more long-term strategy in mind, signing up all of their young talents on long-term contracts.

Young right-back Max Aarons was hotly linked with a move to either Manchester United or Crystal Palace but instead Norwich rewarded the 19-year-old with a five-year contract. He will play a vital part for the Yellows in the upcoming season and it wasn’t just the Englishman that extended his contract at the East Anglian club.

Emi Buendia, Christoph Zimmermann, Onel Hernandez and Ben Godfrey who were all key to the Yellow’s success last season also put pen to paper and now Farke knows he has a long-term core of players that he can rely on. Delia Smith does deserve credit for the way she runs the football club, and the long-term stability she has prioritised and the comparisons to other newly-promoted sides are stark.

This season, Aston Villa have broken the record for the most money a newly-promoted side has spent in their first window, splashing out a ridiculous £133.74m on a whole host of players. However, spending big is not always a guarantee of success and for Villa, loose comparisons have been made to Fulham of last season and it is easy to see why, the Cottagers spent £104.85m and flopped massively, finishing second bottom.

However, spending big is not always a bad thing. Wolves also spent over £100m last season and had the best campaign we have seen from a newly promoted side in the last decade - finishing seventh and qualifying for Europe. Two seasons ago, when Huddersfield, Brighton and Newcastle all stayed up, they all invested over £35m on new players.

In fact, perhaps Norwich have learnt from the last two time they were in the Premier League. Last time up, in 2015, they splashed out £42.8m on players such as Steven Naismith and subsequently finished 19th. However, in 2011 they only spent £13.73m and finished 12th and they will be hoping to recreate that finish this time around.

But how have other low spending clubs fared in the Premier League? Aside from Norwich this time around, the last newly-promoted club to spend under £15m was Burnley in 2014, although they finished 19th. In fact, in the last decade just seven sides excluding Norwich this season have spent less that £15m as a newly promoted side.

Of those seven, just three ended up getting relegated with teams such as Newcastle and West Brom flourishing in 2010.

Norwich have played this transfer market incredibly well, even if they get relegated the club are in a much better position financially than they were. They will also be able to command big fees for these young talents they have tied down on long-term deal which could sustain the club for years to come.

They get a fair amount of stick but it is refreshing to see a low-spending well-run club tackle the top flight with a different strategy than we are used to. 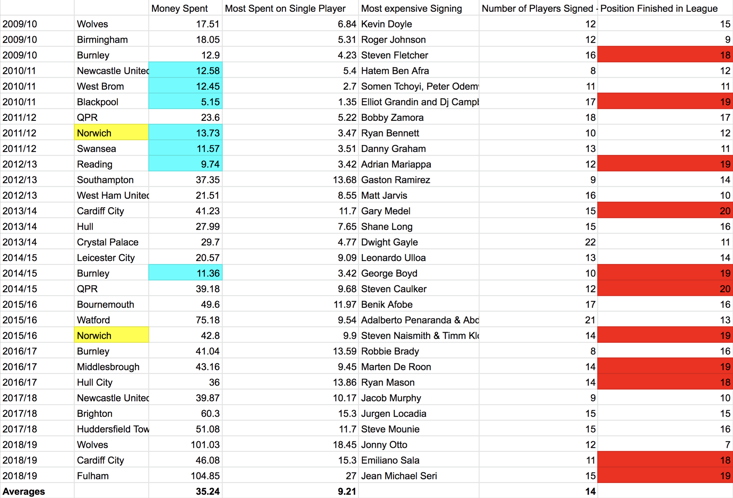