What do you do when you’re given a 42/1 ‘not-a-chance-in-hell’ price for victory?

Those are the odds that bookmakers at the Mirage Casino in Las Vegas had given James ‘Buster’ Douglas to win the fight against the undefeated and undisputed heavyweight champion of the world, the holder of the WBC, WBA, and IBF titles: Mike Tyson.

Instead Douglas became the first boxer to beat ‘The Baddest Man On The Planet’ in a professional bout, on February 11, 1990 at the Tokyo Dome in Japan’s capital, with Iron Mike floored in the 10th round after a flurry of punches in a largely dominant display by the unfancied boxer from Columbus, Ohio.

Douglas, as one commentator noted, “had every reason to come into [the] bout depressed and downtrodden” amid circumstances which would have affected the most mentally tuned of pugilists.

Eight years earlier in 1982, Douglas’ 17-year-old brother, Arthur, died when a gun fell from the top of a refrigerator at a friend's house and shot him in the head. Then, weeks into 1990, Buster's marriage was all but over and the mother of his 11-year-old son, Doris Jefferson, was lying seriously ill in hospital.

Most devastating of all, just 23 days before facing off with Tyson, who at that point possessed a 37-0 record, came the unexpected death of his mother.

"You know, she came over to my house a few days before she passed, just to check up on me, to see how I was doing, because I was going through a lot of things at that time.” Douglas would later say in an interview with The Scotsman. “Everything was going awry.

“I had my biggest fight ever and there were these storms going on in my life. Then she died. A stroke, right out of the blue. I went over to her house to be with her.

“She'd always told me not to let anything get in the way of my dream and I decided then that, if nothing else, I had to do it for her.” 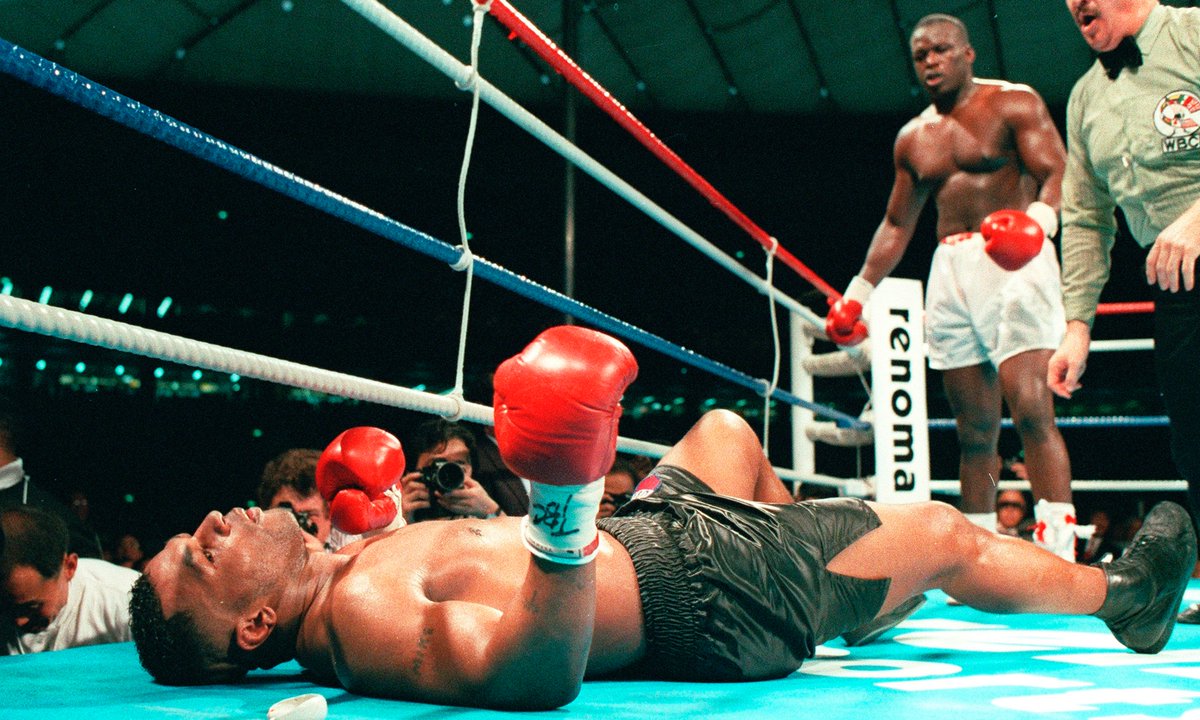 Such tragic happenings ahead of the biggest fight - scrap that, the biggest moment - of his life were avalanching, and there was no reason to suspect the bookies were wrong. Douglas’ professional record was also not overly flattering have posted a 29-4-1 return to that point.

Weighing 232lbs in a 6ft 4in frame and with a reputation for lacklustre training and a beleaguered backstory, ‘Buster’ came into the ring to face one of the most feared fighters on the planet.

Douglas was supposed to be a ‘tune-up’. Evander Holyfield was in the eye-line (ultimately Tyson and Holyfield wouldn’t actually meet inside the ring for another six years).

But 10 rounds later, Douglas’ hands were in the air and Tyson was flailing around trying to find his gum shield and searching for some safety and support from referee Octavio Meyran, after suffering a four-punch combo that made him taste canvas. Tyson had put Douglas down in the eighth round with a stinging uppercut, but the underdog had regained his feet and kept working away at his opponent’s increasingly-closed left eye and by the time he delivered the crushing finale Tyson’s legs resembled little more than jelly.

The fight was over and there was a new king. Boxing had witnessed its biggest ever upset. Like David v Goliath entered lexicon, so too has Douglas versus Tyson become the modern-day tagline for the triumph over adversity.

Ahead of a 2019 documentary centred on the notorious bout, called ‘42 to 1’, both Douglas and director Jeremy Schaap were interviewed by ESPN. The pair were adamant that this wasn’t necessarily the narrative it has been mythologised to be, and denounced claims that some of Tyson’s actions - such as him having cut ties with his trainer Kevin Rooney - meant that he was the architect of his own downfall in Tokyo.

“People think of it as ‘Mike Tyson lost’ rather than ‘Buster Douglas winning’,” said Schaap. “Buster Douglas didn’t get lucky in this fight, it wasn’t a fluke. It was really about Buster Douglas, a guy with tremendous potential and talent realising all of it, tapping into it in a way we hadn’t seen before and being highly-motivated.”

Douglas concurred, “[I had] mixed emotions. I just kept my eye on the prize. I felt strong about the fight, even more so after my mother’s passing. Every other day somebody would call me on the phone and a tragedy would happen.

“Everybody else thought that I was going to an execution. It was like ‘here comes another one who is going to bite the dust.’ At the time he was like a wrecking ball, going through the contenders left and right. I felt very confident in my abilities. I felt strong. I fought on six undercards with Mike so I was aware of his potential.”

That $4000 would have been collected had Douglas stayed down in the eighth, and the length of the count after Douglas had been floored has been disputed, with allegations suggesting the allotted time was notably extended - ‘The Long Count’ - particularly in contrast to the countdown that was applied after Tyson was floored two rounds later.

“Don King, who was promoting the fight was supposed to be neutral,” said Schapp, “He’s protesting saying that Mike Tyson won the fight before Douglas; Buster won in the 10th round, Tyson in the eighth.”

The immediate celebrations were put on hold due to protestations from the Tyson camp, particularly from King. The controversial showman was supposed to be promoting both fighters but proclaimed that his Tyson had suffered an injustice in receiving an eight-second count instead of 10..

King’s consternation was expunged, and Douglas was crowned. “He was forced to back down in the immediate aftermath and allow Buster to be acknowledged as the new undisputed heavyweight champion of the world,” said Schapp.

The feeling of euphoria from Douglas, a man who had reached the highest high in his sport, was all too fleeting. Later the same year, he fought Evander Holyfield in a bout for which he was paid $24 million. ‘The Moment Of Truth’ took place on 25 October 1990, ironically at the same venue at which those long odds against Douglas had been offered eight months earlier, The Mirage in Las Vegas.

It has now been 21 years since Douglas’ last professional fight. The mantle of the underdog who could triumph in the most unexpected of arenas, is something that, unlike those titles he all too briefly held onto, will never be removed.