“Weekends will never be the same again,” boasted Sky Sports presenter Richard Keys. He didn’t know the half of it.

Sunday 16 August 1992 brought football fans just the slightest glimpse of what the future would hold. The very first Ford Super Sunday was a five-hour broadcast for a single game of football, with extensive highlights of the previous day’s games, in-depth pre-match analysis and even a post-match phone-in. This really was a ‘Whole New Ball Game’, as per the tagline.

In the seasons running up to the advent of the Premier League, live coverage so often involved a quick studio introduction before immediately heading to the match itself, and post-match reviews were limited to whatever was left of the rushed two-hour window that had been reserved for the entire coverage.

But the opening weekend of the brand new top-flight was most notable for the dedication of hours of airtime to the big game. We all knew of the huge amounts of money Sky had spent for the privilege – this was the first of 60 games per season over a five-year deal costing the satellite giant £304m in total – but Nottingham Forest v Liverpool on this day 29 years ago was an eye-opener when it came to the depth of coverage which would become second nature before long. Sky were now delivering the kind of spotlight usually reserved for FA Cup final day.

It was Teddy Sheringham who scored the first live Premier League goal. The Forest striker had been desperate to make a move to Tottenham Hotspur after hearing of the north London club’s bid for him. Brian Clough had turned it down and told Sheringham to get on with the job. Cutting in from the left, Sheringham wasn’t tracked by any Liverpool defenders as he shaped up and lashed a right-foot belter beyond David James in the visitors’ net. 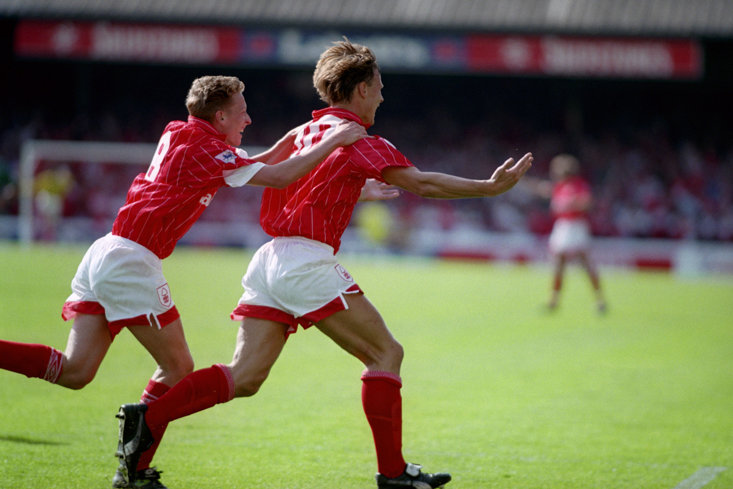 SHERINGHAM CELEBRATES AFTER NETTING THE ONLY GOAL

It would be Sheringham’s last goal as a Forest player. A week later he finally got his move to Spurs, leaving Clough’s side with a struggle that would end with them being relegated by May. For Sky though, that was just the start.

The following night’s Monday Night Football debut between Manchester City and Queens Park Rangers brought with it a dance troupe, overhead plane banners, cameras in dressing rooms, a firework display on the pitch, and a parachute team delivered the match ball from the skies. This was not what a 1992 audience had been used to.

Of course, we’ve witnessed so much more in the intervening years, and the money involved has reached astronomical levels. As the investment has grown, so has the level of talent, and we have become far more familiar with pomp and ceremony around the most routine of fixtures. These days we have 200 televised games rather than the initial 60, with the schedule spread across three different providers. Four and five-game weekend footballing feasts are now the norm.

But it was on that Sunday back in 1992 that the national sport made its most dramatic step into the future. With the Premier League came a new window into the football world, and weekends really have never been the same again.