“To begin with, I have a question for you… Is there a diving school in London?” It was Jurgen Klinsmann’s first press conference following his move to Tottenham from Monaco in 1994.

His arrival at White Hart Lane was met with derision, partly because he was a member of the West Germany squad that knocked England out of the 1990 World Cup at the semi-final stage and as he’d developed a reputation as a diver. Klinsmann infamously went to ground a little easier than expected in the final against Argentina, which resulted in Pedro Monzon’s sending off.

Of course, in 1990, Monzon’s shin-high challenge on the German was considered fair. In the modern game, it’s unlikely the Argentine’s challenge would have been met with outcry and the red card deserved. Nevertheless, Klinsmann was criticised from the moment he stepped off the plane in England to sign for Spurs. Andrew Anthony even penned an article for the Guardian titled “Why I hate Jurgen Klinsmann” before the season had started.

A couple of months later, however, and the tone in the country had changed completely, and for the better too. “Why I love Jurgen Klinsmann” was the headline for a Guardian piece written by Anthony six weeks into the 1994/95 campaign. Klinsmann quickly won over the hearts of football fans for his sense of humour and charm. The striker was not the archetypal, cold-hearted German they came to expect, but rather an incredibly likeable man and a fine goalscorer to match.

Klinsmann still holds the record for the most Premier League goals scored by a German, having notched 29 times across two spells with Spurs. However, it was his famous celebration after netting his first goal in England that endeared himself to supporters across the country and the idea for the decision to dive after scoring came from teammate and England international Teddy Sheringham. “Teddy advised me to do a dive after scoring my first goal and that kind of turned everything around. The joke made me popular in England but I was also lucky at that time because I was scoring the goals,” Klinsmann said in a 2004 interview with FourFourTwo. 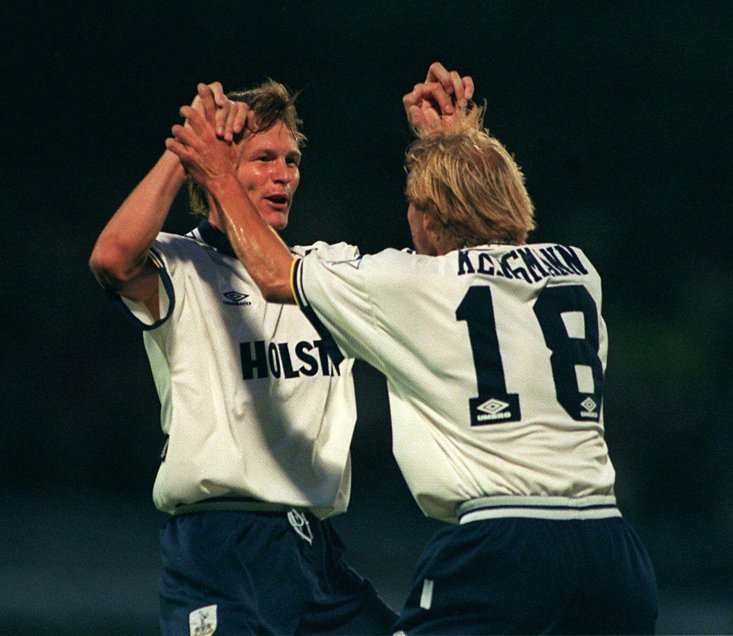 Of course, in the same interview, he insisted he was not a diver, but the decision to celebrate the way he did certainly helped sway any doubters and critics. He was the loveable German in north London and his goals meant supporters saw the dive on a regular basis. Klinsmann bagged seven goals in his opening six Premier League appearances for Spurs, including five in August that helped him land his one and only player of the month award in England’s top tier tier. A further 10 assists to add to his 20 league goals in his solitary full Premier League campaign ensured Spurs finished seventh as Klinsmann won the FWA Footballer of the Year, while his performances were enough to earn him a place in the PFA Team of the Year alongside Chris Sutton and Alan Shearer, who had fired Blackburn Rovers to their solitary Premier League title.

Klinsmann did his reputation no harm by returning for the second half of the 1997/98 season and, with Spurs in peril and close to relegation, his nine goals in 15 appearances helped them keep their head above water. Spurs ended the season on a five-match unbeaten run, which included wins over Newcastle and Wimbledon, the latter a predictably memorable one for those close to the club. Spurs needed to win in order to effectively confirm their place in England’s top-flight and were four minutes from heading in at the interval 2-1 down. Klinsmann drew Spurs level just before half time, before adding his second, third and fourth goals in a stunning six-minute second half spell for Christian Gross’ side.

He netted in his final ever club appearance - a 1-1 draw with Southampton - before retiring from playing in the summer of 1998, with his legendary status secure with Tottenham. However, it was his initial move to north London in 1994 that turned heads and paved the way for foreign players to both move to England and succeed in the physical rigours of the Premier League. While he spent just one full season with Spurs before a switch to Bayern Munich in 1995, he remains a cult hero among fans on the back of his surprise arrival from Monaco for a then princely £2m. Indeed, 23 years after his move to Spurs, he remains one of the Premier League’s greatest ever foreign imports.