In the midst of the summer transfer window 2021, we rewind the clock 21 years, look back at the most controversial transfer of all time. Enter Luis Figo.

We’ve had Neymar, Sol Campbell and Carlos Tevez but on this day in 2000, Luis Figo completed the most controversial transfer in football history; moving from Barcelona to Real Madrid in a move that shocked the footballing world to its core and began the legendary Galacticos era at the Santiago Bernabeu.

Over the course of five joyous seasons Figo had inspired Barcelona to two La Liga titles, two Copa del Reys and a UEFA Cup Winners’ Cup. The Portuguese was the star of the show, adored by the Nou Camp faithful. One tale that typifies how symbolic he was to Barca at the time was that after one league title win, he died his hair blue and red and proclaimed: "White cry babies, salute the champions.”

In 2000, Figo was the best player in the world and would go on to deservingly win the Ballon d’Or ahead of Zinedine Zidane whilst wearing the shirt of the ‘white cry babies’ in question. 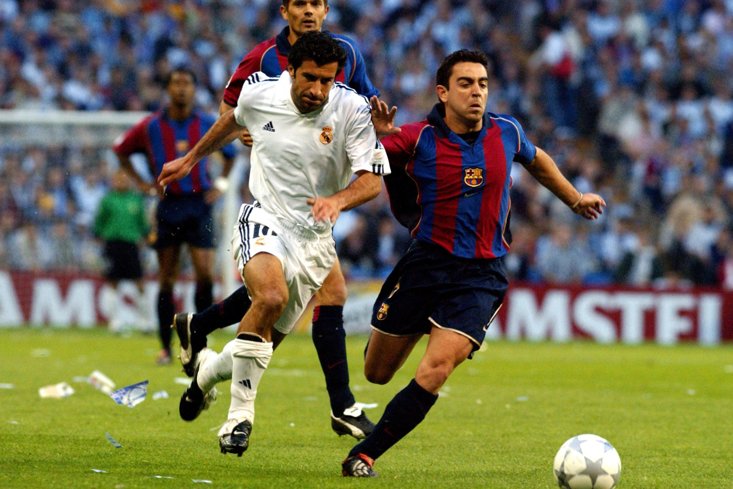 So how on earth did this move come about? Madrid were actually enjoying success of their own at that time. They had won two of the last three Champions League titles and the club president Lorenzo Sanz looked set to win another term in the upcoming elections due to this European success.

But then came Florentino Perez.

As one of the richest men in the country, Perez knew he had to do something impossible to wrestle the presidency from Sanz. He wanted to do the unthinkable and bring the icon of Barcelona - the best player in the world - to the Spanish capital in an act that would prove Real Madrid were the biggest club on the planet.

The Spanish businessman had a plan. He approached Figo’s agent with, what looked like on paper, a perfect deal for his client. The proposition was that the Portuguese winger would get £1.6m up-front for signing a contract that said he would join Real if Perez won the election and even if Perez lost, he would get to keep the entire sum of money.

With all signs pointing towards another term for Sanz, this seemed like the best deal in history for Figo and his agent. Money had just fallen into their lap, no strings attached. They didn’t count on the deal being leaked to the press leading to turmoil and uproar from the Barcelona fans. Figo, who still vehemently wanted to remain at Barcelona, denied all allegations and put the blame firmly at Perez’s door, claiming he was saying anything he could to win the election and president Sanz backed up these beliefs. In a press conference Figo reassured fans with this statement:

“I’m not so mad to do a thing like that. I want to reassure fans that Luis Figo, with all the certainty in the world, will be at the Camp Nou on July 24 to start the season."

Perez had the Real Madrid members, who voted in the election, and the player himself on strings. He was the puppet master of this incredible performance and made an epic pledge to those at the club. If he won the presidential election and Figo didn’t sign, every member would go to Madrid home games for free over the next season.

Perez, although he probably could have afforded it, would not pay for this out of his own pocket. Smartly, he had inserted a clause in the contract Figo signed that stated if he refused to join Madrid after Perez’s successful election win, he would owe the club £19m in compensation. With his pledge, Perez won. All Los Blancos had to do was pay the £38m release clause and the deal would almost be completed. There was just one thing that could stop them and that was Barcelona’s newly elected president, Joan Gaspart.

Figo begged him to block the move and Gaspart could indeed prevent Barcelona losing their best player by paying Madrid the £19m that Figo would owe them. To put that in perspective, that equated to the fifth highest transfer fee in football history at the time, and they would be paying for their own player not to join their biggest rivals.

“I couldn’t do it. I’m the new president of Barcelona and I pay for Real Madrid’s fans to watch them every week? I would die, die!”

Figo was presented at the Bernabeu the following day as the world’s most expensive player and given the famous number ten shirt by the legendary Alfredo Di Stefano. He did not look happy. Despite the controversy and hatred surrounding his transfer, he performed well again on the pitch and led Madrid to the La Liga title in his first season and the Champions League title in 2002, but his returns to the Nou Camp were haunting.

Missiles were thrown at him - the infamous pig head the most shocking of the lot - but perhaps it was the banner unfurled on his return that will have hurt him the most. It simply read:

“We hate you now, For we loved you then.”

Zidane, Ronaldo and David Beckham would all become marquee signings in subsequent years and form the Galacticos, but no transfer will ever send shockwaves like this one did. The world’s best player forced to move away from his beloved Barcelona to their fiercest rivals Real Madrid. Perez’s risky powerplay paid off.