Boxing
Features
The legendary Filipino has announced his retirement after 26 glittering years in the ring
Kieran Spratt
11:58, 29 Sep 2021

"I knew without a doubt I would become a fighter - I knew that the underdog can, and often does, win."

When James ‘Buster’ Douglas stunned Mike Tyson in Tokyo more than 30 years ago the impact of the infamous heavyweight classic was felt worldwide, and, just under 2,000 miles away from the Japanese capital, the fight’s shocking outcome had just influenced a future boxing great to commit his life to the ring - the story of Manny Pacquiao was just about to begin.

It’s crazy to think that had a 42/1 underdog in Douglas not stopped the seemingly invincible Tyson on that February night, the young man from the Philippines might never have pursued a career in boxing, and we could have been robbed of one of the sport’s greatest students.

Born into immense poverty, Pacquiao and his family were so poor they’d often be unable to even afford basic provisions such as rice. Living with his parents, two brothers and sister in a tiny single-room shack, the future world champion, who would go on to generate approximately 19.6 million in pay-per-view buys and $1.2 billion in revenue, wouldn’t even lay his eyes on a TV set until he was 10. 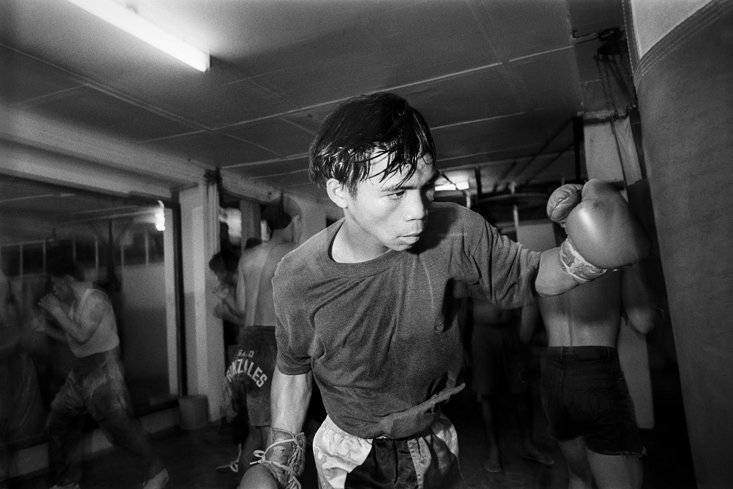 When Pacquiao began to box seriously, he made the decision to drop out of school and move in with his uncle Sardo Mejia in a one-storey home in the southern Philippine city of General Santos. Mejia, a boxing fanatic, would become Manny’s first trainer and his introduction into the world of prizefighting.

Pacquiao later wrote in his autobiography: "Even though he had no formal training, we both took it seriously and knew that we were going to be champions one day."

By 15 he was regarded as one of the best junior boxers in the country and often fought from an open-air park in General Santos, taking on anyone who dared face him and beating all with relative ease.

Seeking bigger challenges, the young fighter stowed away on a boat to the nation’s capital, Manila, where he would sleep on the streets or inside a gym’s boxing ring as he continued to put all his focus on his training. The hard work and sacrifice would pay off and, a year later, Pacquiao turned professional and the rest, as they say, is history. 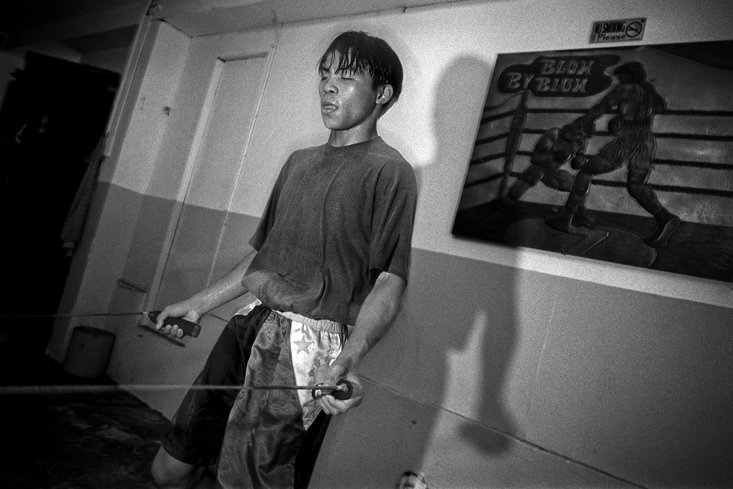 Now 42 and with a promising career in politics on the cards, the Pac-Man has announced he will hang up his gloves. He retires as the only man to win titles across four decades and with a 25-7-2 (11 KOs) against former or current world champions.

"To the greatest fans and the greatest sport in the world, thank you," he wrote in a statement. "Thank you for all the wonderful memories. This is the hardest decision I’ve ever made, but I’m at peace with it. Chase your dreams, work hard, and watch what happens. Good bye boxing."

Pacquiao’s rags-to-riches story continues to inspire millions around the globe, especially in his native Philippines, and his tale will no doubt encourage waves of future fighters for generations to come. There’ll never be another Manny Pacquiao.

x
Suggested Searches:
Manchester United
Liverpool
Manchester City
Marcus Rashford
Premier League
More
football
Sheriff Tiraspol - The Champions League Club With Two Faces
On the surface, it has been the underdog story of the Champions League so far. Never before has a club [ ... ]
boxing
From Taming Tyson To Bashing Buster, Evander Holyfield’s Best...
Today marks the 59th birthday of one of the best boxers to lace up a pair of gloves in the modern [ ... ]
football
Fernando Torres - Atletico's Local Hero, Liverpool's Tainted...
‘This means more’ is Liverpool’s oft-derided motto, but when they face Atletico Madrid [ ... ]
football
On This Day In 1987: The Rangers v Celtic Shame Game
Whatever the circumstances when Rangers face their Glasgow neighbours Celtic the [ ... ]
athletics
On This Day In 1968: The Greatest Sporting Protest Of All Time
Some sporting images will stay with us forever. Muhammad Ali standing over Sonny Liston, Michael Jordan’s [ ... ]
football
Dorking Wanderers Aiming To Complete The FA Cup's Ultimate Underdog...
Something is stirring in the sleepy, stockbroker-belt Surrey market town of Dorking. And if the Wanderers [ ... ]
boxing
Outside the Ropes: Jennings Gym - Training, Tunes And Gardening...
Jennings Gym is not your average boxing gym. Tucked away on the ground floor of a former cotton spinning [ ... ]
football
Thierry Henry - ''The Best Player To Have Ever Played In The...
"No, number one is not Alan Shearer - number one is Thierry Henry. Thierry Henry is the best player [ ... ]
football
93.20: The Moment Sergio Aguero Changed English Football
The greatest moment in Premier League history. Sergio Aguero’s goal against Queens Park Rangers [ ... ]
cricket
Assessing England's Ashes Squad: The Strengths And Weaknesses...
So we know the 17-man squad that will go Down Under to try to win the Ashes for England this winter, [ ... ]
rugby-league
Naiqama Seals His Perfect Ending After A Year Of Personal Turmoil
Less than a year ago, Kevin Naiqama looked destined for anything but a fairytale ending to his St Helens [ ... ]
football
Alan Shearer: Newcastle's Boyhood Hero Who Won The Hearts Of...
Footballers in this day and age are judged by how many trophies they win. But when Alan Shearer, the [ ... ]
rugby-league
French RL Ready For Momentous 2022 After Toulouse Promotion...
French rugby league had never known as important a weekend as this one. Catalans Dragons were in their [ ... ]
football
Paul Scholes - The Unassuming Magician Who Ruled The Premier...
England don’t produce these types of players often, but every now and then a footballer will come [ ... ]
football
Frank Lampard - The Intelligent Goalscoring Genius Who Helped...
During the 90s and early 00s, the influx of money into the Premier League had led to a whole new era [ ... ]
football
Roy Keane: The Midfield Enforcer Who Was So Much More
Roy Keane is held up as the defining defensive midfielder of the first half of the Premier League era. [ ... ]
boxing
Bare-Knuckles, Blades And Broughton: The Evolution Of The Boxing...
From oxhide to metal, hemp rope to horse hair, it’s fair to say those shiny, top-of-the-line gloves [ ... ]
football
John Terry - England's Last Truly Great Defender Who Won Everything...
When looking back at John Terry’s footballing career, Chelsea fans can do so with misty eyes. [ ... ]
football
Ashley Cole - From ''Next Tony Adams'' To Chelsea Great Despite...
Ashley Cole was an Arsenal legend in the making. An academy starlet, he rose through the ranks and established [ ... ]
football
Merry Go-Round Or Hornets Go Down? Watford Appoint Yet Another...
The sack race is a hotly-debated topic every year, as fans postulate on which manager will be the first [ ... ]
football
Branislav Ivanovic - Chelsea's Iconic Right Back Turned Prolific...
Branislav Ivanovic’s start to life in London was far from smooth. After joining Chelsea in January [ ... ]
football
13 Goals Conceded, 24 Clean Sheets: Petr Cech's Iconic 2004/05...
This morning we announced Petr Cech as our greatest ever Premier League goalkeeper, as we run through [ ... ]
us-sports
Before LeBron, Kobe, Shaq And Magic There Was Jerry West, The...
Kobe Bryant’s tragic passing at the beginning of 2020 brought calls for the National Basketball [ ... ]
boxing
Muhammad Ali's Fall, Larry Holmes' Rise And Mike Tyson's Revenge
It’s impossible to overstate Muhammad Ali’s impact on the world of boxing. The man [ ... ]
boxing
On This Day In 1975: Ali And Frazier Thrill The Entire World...
More than any other facet of sport, boxing lends itself to delivering nights that become cultural landmarks. [ ... ]
rugby-league
Smith Has ''Fallen Back In Love With Coaching'' With Super League...
When Tony Smith took the Hull KR in 2019, I’ll confess, there was part of me that was asking; [ ... ]
boxing
Boxing’s Most Poignant Night: When Hopkins Outclassed Trinidad...
In April 2001, when Bernard Hopkins and Felix Trinidad knew they would meet each other at Madison Square [ ... ]
rugby-league
The Last Tackle: Who Makes The Grand Final And Who Suffers Semi-Final...
The Last Tackle: And then there were four. We wondered last week if the Betfred Super League eliminators [ ... ]
football
Bill Shankly - The Teenage Miner, Midfield Star And Managerial...
Bill Shankly wasn’t only a great football manager, you know. He was one hell of a player too. [ ... ]
football
Rooney's Dream Debut: The Night Manchester United's History...
It was a quirk of fate that brought Wayne Rooney to Manchester United in 2004. Sir Alex Ferguson hadn’t [ ... ]