It may have ultimately only been a consolation in the overall scheme of the game, but Cristiano Ronaldo netted his 700th career goal on Monday when scoring from the penalty spot in Portugal’s 2-1 European qualifying loss to Ukraine in Kiev.

The defeat may have taken off some of the gloss, but Ronaldo’s sensational achievement cannot be discredited. The guy has simply scored goals wherever he has gone.

His 95 international goals dwarf Pauleta’s previous Portuguese record of 47, while he also made light work of superseding Raul’s Real Madrid high by tallying 450 goals in just nine years at the Santiago Bernabeu.

Even at Manchester United, where he arrived as a raw 18-year-old winger, he struck 118 times in a six-year span including a 42-goal campaign in 2007-08 which ranks third in the Red Devils’ long history.

With three years still to run on his Juventus contract there is every reason to believe that there is plenty of life in the 34-year-old just yet. Having become only the sixth player in football history to score 700 goals in official senior competition, Ronaldo’s sights will now be set on the five who preceded him.

Who would be brave enough to bet against him usurping all of these legends of the game and become the greatest goal scorer football has ever seen?

The vast majority of German hero Gerd Muller’s staggering haul came in his 15-year tenure at Bayern Munich. He remains the highest goalscorer in the Bavarians’ history by some stretch, with almost twice the number of nearest contender Karl-Heinz Rummenigge. ‘Der Bomber’ was also the record scorer for the Germany men’s national team for a 40-year period between 1974 and 2014 until Miroslav Klose nudged past his tally of 68 goals in the famous white and black colours of Die Mannschaft. 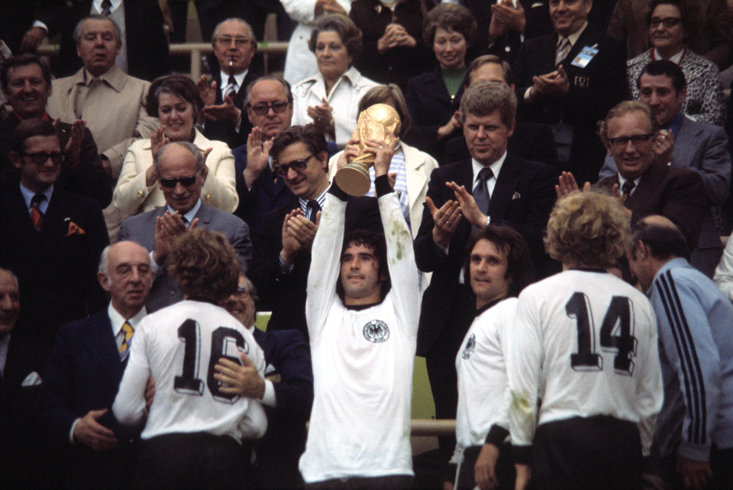 For the national team of Hungary, the legendary Puskas recorded an incredible 84 goals in 85 appearances and was an intrinsic part of the iconic ‘Aranycsapat’ (The Golden Team) which collected gold at the 1952 Olympics and destroyed England 6-3 at Wembley Stadium the following year in what became known as ‘The Match of the Century’.

His prolificacy at club level for Real Madrid after moving from his home city of Budapest is legendary. Upon his death in 2006, his former Los Blancos teammate Alfredo di Stefano stated: “The man was a super-talent. I have lost a friend and quality player. That’s how Puskas was as a person and a football player. He was one of the greatest players of all time.”

It is a stat the Brazilian may argue with - Pele claims to have scored 1,284 goals in 1375 games. Basically, if you want to compile a similar statistic, work out how many goals you bagged on the field after school.

However, 767 goals across two decades and 831 games is still a fantastic haul, with 77 goals in 92 internationally for Canarinha an exceptional bragging right to go alongside his three World Cups.

Pele, voted the Player of the Century ahead of the new millennium,  also won six Brasileirão titles and a brace of Copa Libertadores in an 18-year career in his homeland with Santos. “I was born to play football,” Pele has stated, “just like Beethoven was born to write music and Michelangelo was born to paint.” 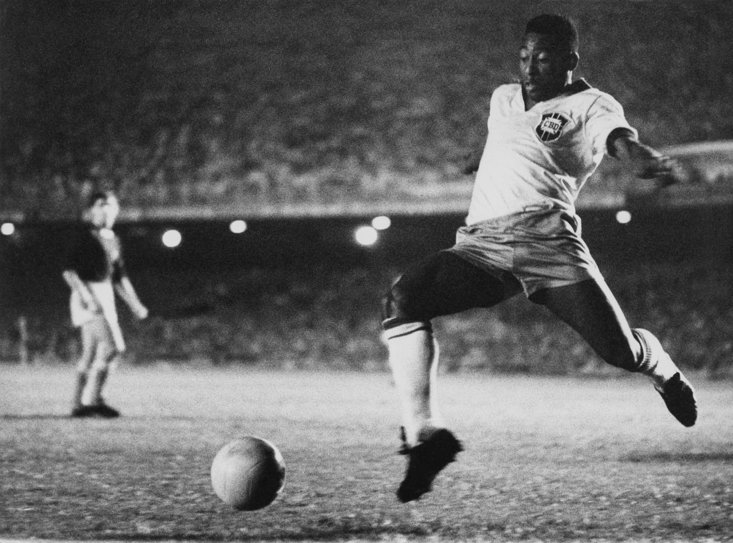 Boasting a career which spanned 14 clubs, Romario’s talent was spotted at 13 and he began his professional career with Vasco da Gama after scoring four goals against them in a single match. PSV Eindhoven is where his status erupted thanks to a prolific goal-scoring rate, before Johan Cruyff - not a bad player himself in his day - procured him for Barcelona.

At the 1994 World Cup tournament in which he emerged with the Golden Ball, Romario’s goal against Sweden took Brazil to their first final in 24 years and the forward then scored one of the decisive penalties to best Italy in the showpiece. He was unfortunate to miss out on 1998 and the 2002 triumph through injury.

At 39 years old, he continued to play at the highest level of Brazilian football before retiring as the world’s second-highest scorer of all-time.

The only player to have broken the 800-goal barrier, Josef ‘Pepi’ Bican scored more than 500 of overall for Slavia Prague from the late 1940s to the late 1950s. Bican - who passed away in 2001 - was inducted into the Czech Football Association’s Hall of Fame on what would have been his 100th birthday in 2013, but he also played for Austria’s storied national team in the 1930s and Bohemia & Moravia during the uncertain political times that existed during his career.

As documented by football historian Radovan Jelinek, via Radio Prague International: “He was a very complex player; he used both of his feet, he scored with his head, and from long and short distance shots. That’s very rare now. He was also extremely fast – he ran 100 metres in 10.8 seconds, just 0.5 second slower than the world record at the time.“

Since recording of match data across parts of his career was sketchy at best Bican’s total could actually be more than 805, and he is known to have scored at least 1468 times across all official and unofficial matches.

More
mma
How Dana White Used 20 Million Instagram Followers To Take On...
When Polish fighter Joanna Jedrzejczyk went to war (and lost) with China’s Weili Zhang in the [ ... ]
sports
Prince, Tyson Fury, Jose Mourinho - Sport's Greatest Ever Press...
It is strange how quickly new trends become traditions. Every afternoon at 5pm, when most people used [ ... ]
sports
Donors, Helpers, Providers - The Sports Stars Stepping Up To...
In times of crisis, there really is something to be gained from looking around at all the good that [ ... ]
football
Speaking The Same Language As Carlo And Jose - The Life Of A...
“What do you do in the bedroom?” “I sleep with your wife.” The life of a football [ ... ]
sports
'Quarantini' Anyone? How To Stay Healthy In Mind And Body At...
Keep those spirits up, dear reader! For many of us, being confined to our homes for the foreseeable [ ... ]
football
Exclusive Leon Osman Interview:The Rooney Explosion And Ancelotti...
Leon Osman couldn’t believe what he was seeing. The Everton midfielder had heard about a young [ ... ]
mma
''A Warrior Poet...Beautiful Man'' UFC Legend Frank Mir Shares...
Former UFC heavyweight champion Frank Mir has told The Sportsman of his admiration for WBC world boxing [ ... ]
boxing
54 Years In The Game, 400 World Title Fights, Bob Arum Is Still...
1966 is a special year in sport for a plethora of reasons.  It was the year the England football [ ... ]
football
'' I Believe In Fairies'' - The Life And Times Of The Extraordinary...
Brian Clough wasn’t just one of the most quotable managers in English football’s long history, [ ... ]
sports
Retired Jersey Numbers: When Sports Stars Become Immortal
Basketball creates universal icons who transcend the sport itself. Over the past three decades or so, [ ... ]
football
From Jules Rimet To The FA Cup, The Sporting Trophies That Went...
When the World Cup trophy was stolen in London on 20 March 1966, it threatened to plunge the most famous [ ... ]
motorsport
On The Ground In Australia As Coronavirus Threw F1 Into Chaos
The beginning of a season is normally a time of high excitement as we wait to see which teams have hit [ ... ]
football
'Wizard Of Dribble' Sir Stanley Matthews Was The First Gentleman...
Sir Stanley Matthews was no ordinary footballer. His was a career which spanned some three decades, [ ... ]
winter-sports
From Wheelchair To World Title, The Amazing Katie Ormerod
Katie Ormerod is at her family home in West Yorkshire, fresh from the news that she has just become [ ... ]
football
''It Will Always Niggle'' - Leon Osman Reveals Hurt At How His...
Leon Osman has told The Sportsman of the hurt that still lingers as a result of finding out by text [ ... ]
football
The Man Behind The FA Cup: How Charles Alcock Made A Modern...
There might never have been a more significant game of football than the one played at The Oval on 16 [ ... ]
boxing
The Mike Tyson Interview: ''Living Takes A Lot Of Courage.''
Mike Tyson’s life has been a well-documented roller coaster ride. A difficult childhood, then [ ... ]
football
60 Years In Football, Sacked 37 Times...There Really Is Only...
When it comes to jobs for life, Barry Fry has it covered. The 75-year-old has been in football for a [ ... ]
football
Exclusive Arthur Numan Interview: Rangers, Romario And Rock...
“You just cannot explain it,” insists Rangers legend Arthur Numan of the intense rivalry [ ... ]
mma
Exclusive: ''I Was Mentally Broke'' - UFC Legend Frank Mir On...
Few heavyweights have ever made more Ultimate Fighting Championship appearances than that man from Las [ ... ]
sports
Real Life Forrest Gump Is On A Mission To Discover What It Means...
Rob Pope is a 42-year-old vet from Liverpool who describes himself as “your average talkative [ ... ]
football
Pele On Tour - The Times The Brazilian Legend Brought His Brilliance...
One of the most recognisable names in football, and a player who pretty much did it all at the highest [ ... ]
football
Beauty, Drama, Passion And Tragedy - Why Italia '90 Was The...
You only have to listen to the classic opening title sequence used by the BBC for their Italia '90 [ ... ]
motorsport
All Action Superhero Barry Sheene - He Loved The People And...
During my time working in the MotoGP and F1 paddocks I’ve been lucky enough to meet some great [ ... ]
motorsport
''DAS Ist Good'' - Can Anyone Really Better The Brilliant Benz...
The fireworks are exploding overhead, the music is pumping from the PA system and Lewis Hamilton, along [ ... ]
boxing
Remembering The Fight That Sparked Sports Greatest Rivalry:...
“I hated Ali. God might not like me talking that way, but it's in my heart.” Amidst [ ... ]
rugby
Know Your Knight From The Full Kit With Our Handy Rugby Fan...
The Six Nations may be all talk of the new Coronavirus and a blistering quick France, but there’s [ ... ]
football
Superclásicos Serve Up A Soap Opera Of A Final Day, With A Cameo...
Last Saturday afternoon, Hernan Crespo walked out onto the pitch at River Plate’s Estadio Monumental [ ... ]
cricket
Don Bradman - Cricket's Greatest Ever Player Set The Bar For...
He has a career Test batting average more than 50 per cent higher than any other player in history, [ ... ]
sports
Meet The Oiled-Up Tongan Going For His Third Crack At Olympic...
Now you might not recognise the name Pita Taufatofua, but you’ll likely know him. A supreme athlete, [ ... ]
This website uses cookies
Cookies help us and our partners provide statistics. By browsing this website, you consent to the use of cookies in accordance with our Privacy Policy and Cookies Policy.
Accept & Close