Football
Features
The midfielder is out injured again and some United fans think it's time to sell him
Kris Voakes
16:01, 03 Jan 2020

He arrived back at Old Trafford amid a blaze of flashlights. There was the world-record £89.5million price tag dangling from his neck, the new blonde hairdo, the music video with Stormzy, and the #Pogback takeover on social media.

As a former Italian Football Editor working as Manchester United Correspondent in 2016, I was as excited as anyone at the prospect of Paul Pogba repeating his magnificent Juventus form at the Theatre of Dreams.

But almost four years on it is fair to say that Pogba’s second United spell has not gone to plan. His latest ankle injury, after just two substitute appearances in three months, has helped to cast more doubts on the Frenchman’s future at a time when his club are struggling to have any kind of impact on the top of the Premier League.

The injury has been exacerbated by Pogba’s agent, Mino Raiola, again piping up about his role in the midfielder’s transfer from Juventus with a dig at Sir Alex Ferguson, who infamously referred to Raiola as a “s**tbag” for coaxing Pogba away in 2012.

“I didn’t threaten anyone at Manchester United with a gun to buy back Paul Pogba,” he told Voetbal International. “Alex Ferguson has gone straight against me and Paul, that is allowed, but where was he when his successors bought Paul back?”

For many, though, Pogba’s current situation is entirely typical of his United career. His 2019-20 season has just not got going, and that tends to be the overriding feeling at almost every turn when it comes to Pogba and the Red Devils.

In his first full season as a United player under Jose Mourinho in 2016-17, his regular deployment at the defensive base of a 4-2-3-1 system simply didn’t get the most out of a player who is at his best when exploiting space in opposition territory.

The following season he was finally given a go by the Portuguese in a more advanced position and began to show more of what he was capable of. Pogba was particularly inspiring when playing as a number 10 in a 2-0 victory at Everton on New Year’s Day 2018 and there appeared to be a changing tide on the horizon, with Mourinho even jumping to his defence after the match following previous criticism from United legend-turned-pundit Paul Scholes.

“Paul [Pogba] tries to do his best all the time. Sometimes he plays well, sometimes he doesn’t play so well,” he said in his post-match press conference at Goodison Park. “It’s not Paul’s fault that he has made much more money than Paul Scholes. It’s not Paul Scholes’ fault either, it’s just the way football is. I think Scholes will be in history as a phenomenal player, not as a pundit.” 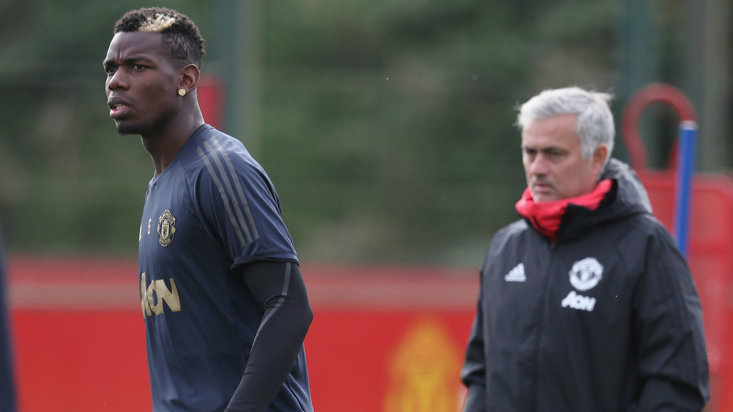 The problem for Pogba was that within six weeks his relationship with the manager had completely disintegrated and he was regularly being left out of the team for United’s biggest matches, including both legs of their Champions League exit to Sevilla.

Pogba and Mourinho were never close again, with the atmosphere between the two on the training ground becoming poisonous as United’s struggles became too much for the board to bear any longer. When Ole Gunnar Solskjaer replaced Mourinho in December 2018 there seemed to be an immediate positive effect on the midfielder.

In the Norwegian’s first nine Premier League games as United boss, Pogba scored eight goals and registered five assists. He had become the phenomenon of English football that people had expected upon his return to Old Trafford back in 2016.

But that didn’t last either, with his only goals in the 11 months since having come by way of a match-winning brace against West Ham last April. Constant ankle problems haven’t helped this season, but his clumsy attempt to open avenues for a transfer last summer was hardly the best move either.

To some fans, Pogba is - and always will be - trouble. But when he is at his very best there can be little doubting the impact he can have. For all the consternation, United have a 55% win record in the league with Pogba in the starting XI since his arrival from Juventus, but only a 45% record when he is missing. Yet he has rarely reached the heights he managed at Juventus when playing under Antonio Conte and then Massimiliano Allegri in a more advanced midfield position.

According to Understat.com, Pogba has recorded an Expected Goals (xG) output of 0.30 and an Expected Assists (xA) return of 0.18 when playing as a midfielder since 2014 compared to 0.34 xG and 0.27 xA on the rare occasions when he has started as a number 10.

Sky Sports News
@SkySportsNews
"If he is your squad, you build your team around him" ðŸ”´
Ole Gunnar SolskjÃ¦r wants Paul Pogba to be his main man this season - and gives an update on possible arrives this summer
354
3206

Solskjaer claimed before he took over as manager that he would build a team around Pogba if given the chance, and he doubled down in the summer when asked again whether that was the way forward for Manchester United.

“Paul is a fantastic player and a fantastic human being. He has always been a great professional,” he told reporters in July.

“When I was at Molde I said ‘If he’s in your squad, you’d build a team around him.’ I would say the same now.

“Manchester United fans know their football. We know Paul has been criticised by a few but he’s loved by loads more.”

But beyond those first nine games in charge Solskjaer has struggled to play to Pogba’s strengths despite Mourinho additions Nemanja Matic and Fred having both been identified as keys to unlock the best from the Frenchman. United desperately need a new midfielder who can add some defensive consistency to their side but also create a platform to get Pogba into opposition territory more often.

Failing that, it might be time for them to cut their losses on a player who will forever be a disruptive influence thanks to the cult of personality which exists around him. If Solskjaer follows Mourinho in proving unable to spark Pogba to life, then there’s no point in him being a United player.