Sport is often the be-all and end-all of an athlete’s career.

But Aberdeen defender Shay Logan has revealed this week that he has secretly been working as a plumber to supplement his football salary and to tee him up for life after his on-field career. So it got us thinking... what do sports stars do once they hang up their boots/gloves/clubs if they don’t stay in the sport?

Some of them have found it difficult but others have made their big money after calling time on their careers. We take a look at five of the best examples.

One of the greatest boxers of all time made more money from a fortuitous brand deal than he ever did inside the ring. The deal that has kept him comfortable well into his retirement was the one he struck for his name to be used on a grilling machine, something he wasn’t even keen on for the first six months.

“I looked at it and said, 'I'm not interested in toys,'" Foreman explained.

Six months later his wife had got him on board with the revolutionary grill and Foreman had struck a deal meaning he was set to earn 40% of the profits in exchange for his naming rights. He earned millions.

Having lost in his final fight against Shannon Briggs, he was sat feeling gutted in the dressing room. Then somebody came in and gave him a cheque for $1 million, his earnings from sales of the grill. He never fought again, instead focusing on business before eventually being bought out in 1998 for the handsome sum of $137.5m.

Not a bad bit of business for the boxer, who has invested in a few other products, but none as successful as his lean mean grilling machine.

The mad dog. Former Real Madrid and Everton player Thomas Gravesen was a bit of a nutcase on and off the pitch but has played an absolute blinder since retiring in 2008, living the high life out in Las Vegas until he returned to his native Denmark in 2019.

After a few incredibly smart investments left Gravesen in the black, he headed to the bright lights of Vegas with a remarkable talent for poker. It may be that stern stare or his intimidating aura but Gravesen won big and is now worth more than £100m, according to his own estimations.

He dated models and was even neighbours with superstars Nicolas Cage and Andre Agassi in Vegas but is now living back in his homeland. 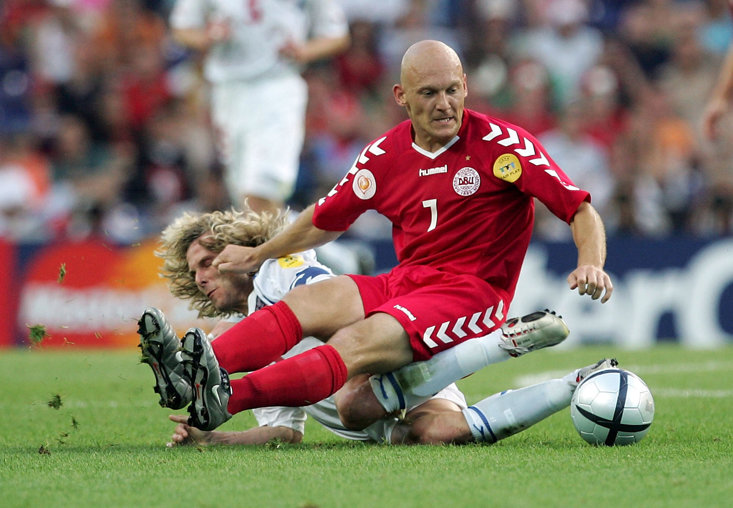 Premier League Golden Boot winner Dion Dublin is now an inventor, a daytime tv presenter and an all-round great bloke. He may not be making millions like those mentioned prior but he is often found on our screens on everything from Homes Under the Hammer to Football Focus.

His love for property and warm tones make him an ideal presenter for the daytime show, while his “stairs leading up to the bedrooms” line has now become iconic. He also had a crack at inventing a musical instrument with his Dube, although we are not sure that has quite taken off as much as his broadcasting career.

Another former Premier League footballer who has turned out to be a business genius, Mathieu Flamini may have earned millions while playing for Arsenal and Everton but he has made even more money since retirement in his attempts to revolutionise the energy industry.

In 2015, Flamini revealed he had founded GFBionchemicals and had been working on mass-producing sustainable alternatives to oil-based products. Now it is believed the Spaniard is currently worth £20m, but he is looking to ‘attack’ a market worth £30bn in the future. His wealth is only going to continue to grow.

The former Chelsea goalkeeper hung up her gloves in August 2019 at the age of just 25 and has done remarkably well since being employed by Goldman Sachs, the investment bank. Working in the Prime Brokerage Division, with wealthy hedge fund clients, she is earning more than she was in football but says it is more about challenging herself than the salary.

"I felt I was missing the intellectual stimulation that a career in finance could give me," she told the BBC. As women’s football continues to grow in this country, hopefully we will see fewer players moving away from the game in search of a different challenge.