Brighton & Hove Albion goalkeeper Mat Ryan doesn't want to worry about relegation this season but instead for the club to cement its place among the Premier League heavyweights.

Promoted to the top flight in 2017, Brighton spent the past two seasons battling to avoid the drop. The Seagulls finished 15th in 2018 and 17th last season, a mere two points above the relegation zone.

As the club readies for another Premier League campaign, with new manager Graham Potter at the helm and signings such as Neal Maupay, Markus Suttner, Ales Mateju, Ezequiel Schelotto and Leandro Trossard, Ryan is feeling optimistic.

Brighton start the new season away at Watford on Saturday.

“Safety is always the minimum goal and then everything above that is a bonus,” the keeper said. “But I think now, coming into our third consecutive season... everyone talks how hard the first season was, and in the second season probably being even hard.

“Now that we’ve come into the third season hopefully we can use those first two seasons as a launchpad for our best season yet.

“The closer we can get to the top ten would be nice, I feel, but there’s no reason why we can’t push even further. The signs and the positive vibes here are good and we’re all looking forward to it.”

Ryan has been one of Brighton’s most impressive performers since joining the club from La Liga side Valencia two years ago.

Last season the 27-year-old made 34 appearances and 97 saves, ranking him eighth-highest across goalkeepers in the Premier League. The ambitious Australian was shocked to see manager Chris Hughton get axed in May, after a bitter relegation battle, but is confident Brighton will recover.

“The more points you get earlier on in the season you’re mathematically safe earlier, the easier it is,” he said. “It got down the wire there last season, as it did in our first season. “It came as a bit of a shock that the club relieved Chris from his role.

“But us as players, it’s our industry we’re in and we have full faith in the club and in the people, the directors and everyone who are making the decisions with the club’s best interests at heart. I’ve always had the utmost respect for Chris as a manager and as a man.

Maty Ryan
@MatyRyan
Was nice to be back at the Amex in front of you all and to have a good confidence building win against my former club.
Me dió mucha alegria a volver a ver mi familia del gran @valenciacf. Mucha suerte esta temporada #amunt 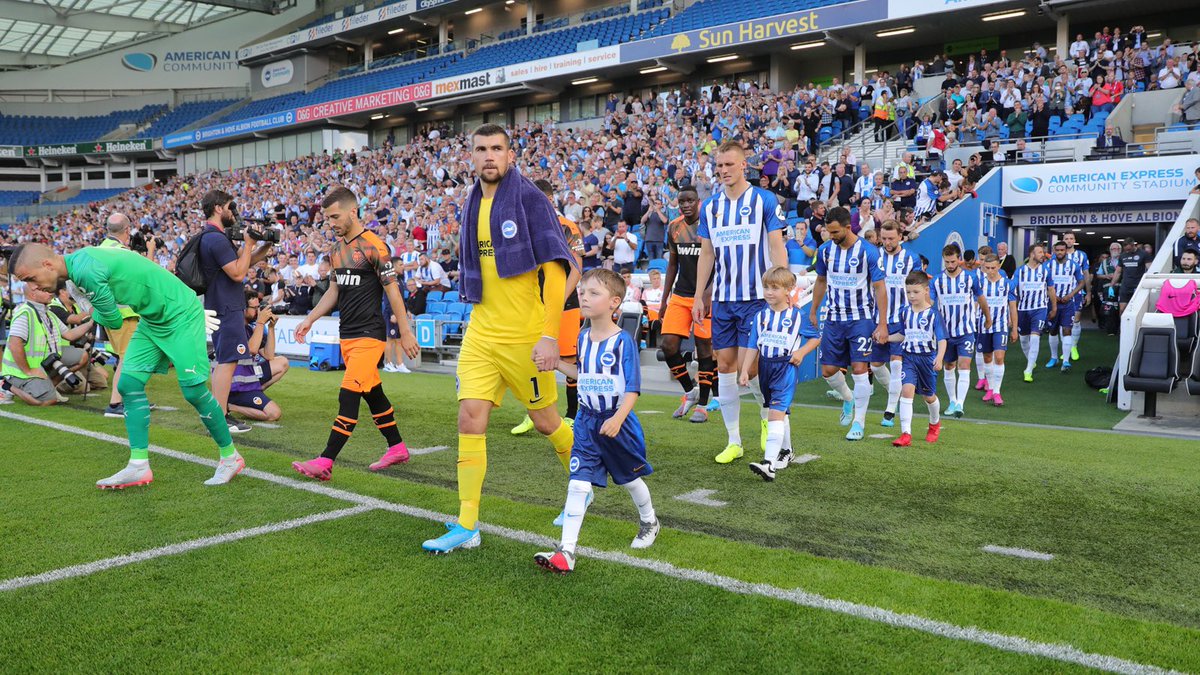 “He was successful in what he did and where he took the club from and to. We’re always just now embracing the change because there is no other alternative.

“Everything moves on and you just have to adjust to these sorts of changes and do the best you can do as an individuals to keep contributing to the team.”

Former Swansea City manager Potter has been given the job to replace Hughton at the Amex Stadium.

Potter made his name in Sweden at club Ostersund and the 44-year-old is overseeing a big change in playing style at Brighton.

The Seagulls will be looking to play a more attacking, possession-based brand of football, compared to the more defensive-minded, conservative approach of Hughton, and Ryan is excited.

“Graham’s very approachable as a person,” he said. “Any queries or questions as players he wants us asking amongst the group. He wants everything clear.

“He wants to play out from the back and an aggressive style of game defensively as well with high pressing. He’s a very much a younger manager and is trying to adopt this modern way of playing.

“He’s very similar to that of Gareth Southgate with the national team as well. It’s been refreshing to have this new approach and new philosophy coming in, it’s one I can relate to quite a bit with my time in Belgium.

“I’m looking forward to this season as so far the progress has been there for us as a group. It’s creating a lot of excitement moving forward.”