An off-hand comment at the United States Women’s team unveiling in New Jersey in June 2019 subsequent created a national furore, thrusting the flippant statement’s spokesperson Megan Rapinoe further into the spotlight and into direct conflict with President Donald Trump, and subsequently making the summer’s tournament in France, for the World Cup the US squad were aiming to retain, even more of a must-watch.

Rapinoe, who turned 35 this week, was preparing to head to her third international tournament, and first as captain of the US team. The Californian winger was becoming increasingly known for her outspokenness as her skill with a football. She was also, of course, a well-known critic of Trump. 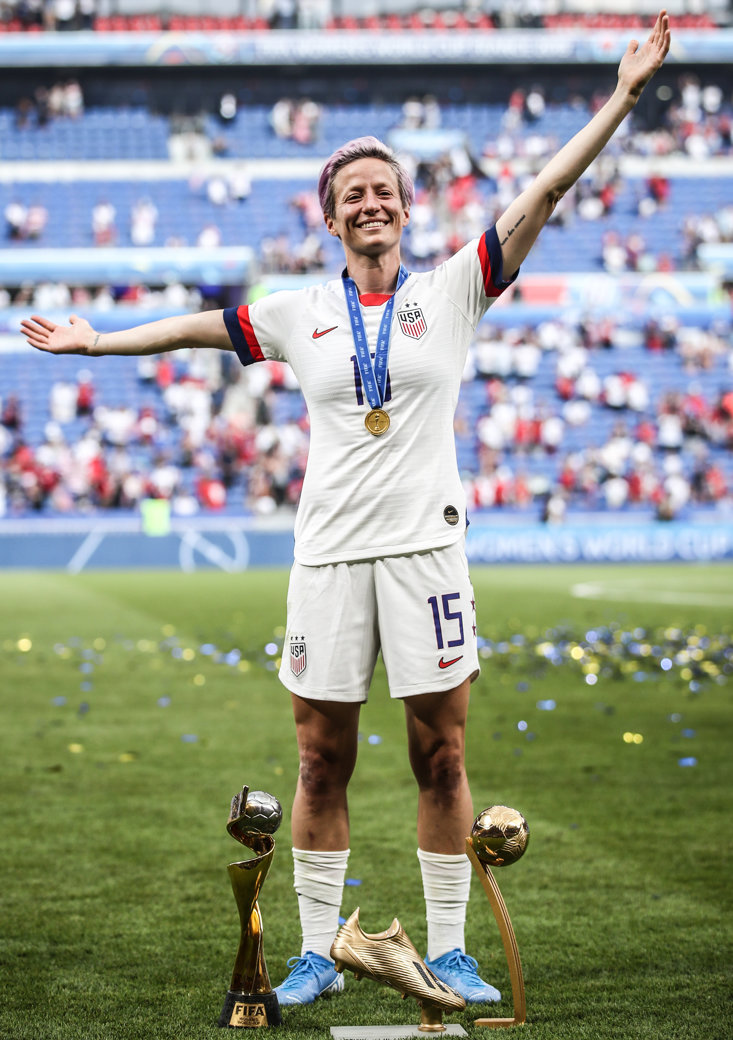 “I am a big fan of the American Team, and Women’s Soccer, but Megan should WIN first before she TALKS!" Trump furiously scribbled on Twitter in the midst of the American team marauding in France, "Finish the job! We haven’t yet invited Megan or the team, but I am now inviting the TEAM, win or lose.

"Megan should never disrespect our Country, the White House, or our Flag, especially since so much has been done for her & the team. Be proud of the Flag that you wear. The USA is doing GREAT!"

In fact, Rapinoe, eye-catching with not just a plethora of goals, an exceptional, almost peerless squad around her, and of course, fantastically coiffed bubble-gum hair, made it her tournament. 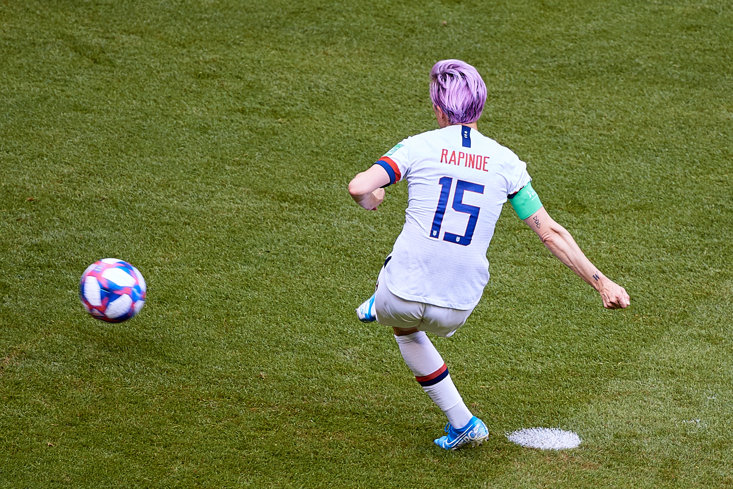 This war of words between an astounding football player and a petty President who should have known better provided an explosive backdrop to an already highly-anticipated tournament that was prepared to posit record numbers with the accelerating growth, popularity, and yes, ever-improving talent, of the women’s game. Later it was revealed that the final between the US v Netherlands on July 7 set a new record for viewership, broadcasting to 82.18 million live viewers and 260 million in total.

Rapinoe did in fact do her talking also on the pitch. She was anointed Player of the Match in the USA’s 2-0 victory over the Netherlands in the Final at the Parc Olympique Lyonnais, having scored the opener from the spot and become only the second female player to start in three finals. Rapinoe then claimed the tournament’s Golden Ball award for Best Player, Golden Boot as the top scorer of the tournament with six goals and three assists, and by the year’s end she was the Ballon d'Or Féminin’s second ever recipient.

Epitomising the musings of the American writer Elbert Hubbard that ‘he who does not understand your silence will probably not understand your words,” Trump had however also taken issue with Rapinoe’s conduct away from the game. She hadn’t just decided to rebel with speech, she showed that silence can boom. Rapinoe had remained standing stoically during the national anthem of ‘The Star-Spangled Banner’'' before the United States’’ World Cup games, hand defiantly away from heart, mouth closed. Trump called the gesture ‘inappropriate’. 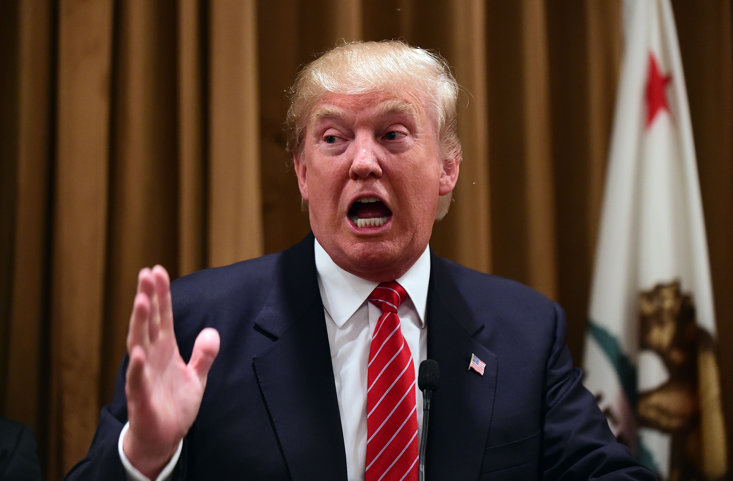 Her actions were far from atypical. In 2016 - well before Trump’s appointment - Rapinoe had become one of the first visible athletes to join former San Francisco 49ers quarterback Colin Kaepernick's protest against racial injustice by kneeling during the national anthem, and had already deemed the 45th President "sexist," "misogynistic," "racist" and "not a good person”. Rapinoe, a gay woman, had long been a prominent equality advocate standing vehemently against The White House increasingly becoming The White Misogynistic Power House.

It had however been a different story four years earlier when Trump’s predecessor, President Barack Obama, welcomed the country's 2015 FIFA Women's World Cup winners to the White House in the October in order to honour their achievement, three months after Jill Ellis's team - which included Rapinoe - beat holders Japan 5-2 in Canada. Even prior to this, Obama had announced the designation of a Presidential Delegation to attend the final in Vancouver, with Vice President Joe Biden present at BC Place. 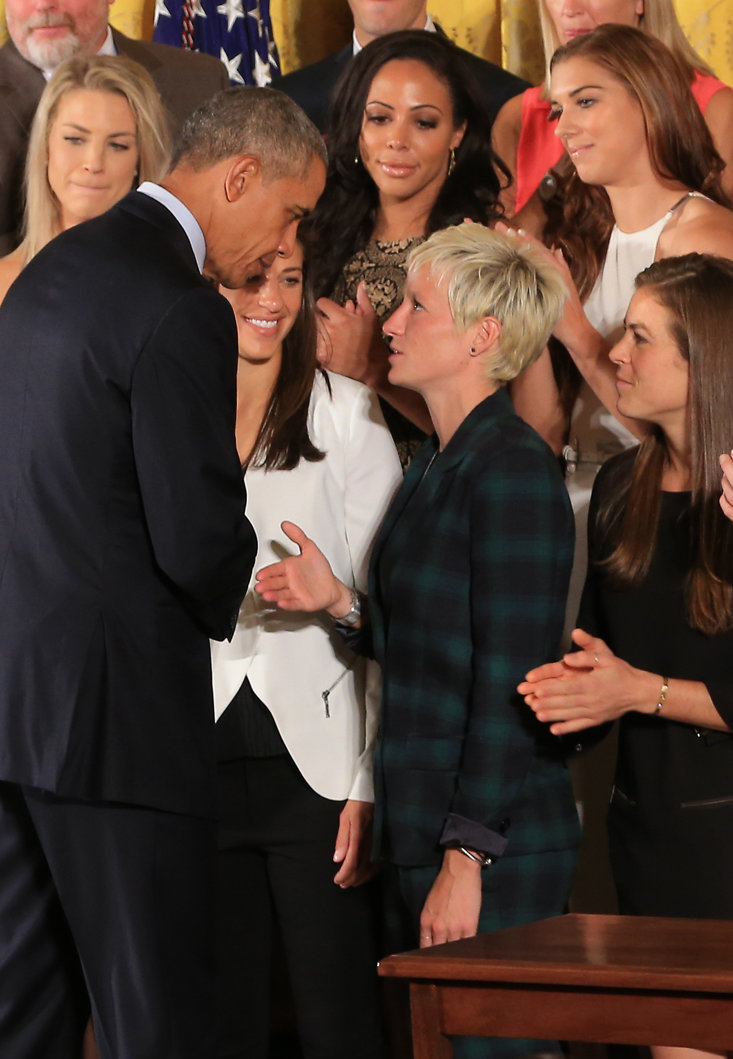 After her second victory on the international stage, instead Rapinoe, as co-skipper on behalf of her team, accepted an invitation from Senate Democratic Leader Chuck Schumer and House Speaker Nancy Pelosi, to visit the Capitol and Congress. This was alongside the ticker-tape parade that shut down New York City, and in which Rapinoe charged the congregated crowd in typical fashion to “be better, we have to love more and hate less. Listen more and talk less. It is our responsibility to make this world a better place.”

Those words still resonate, though it is hard to argue, one year on from Rapinoe ‘finishing the job’ against the Netherlands that the world is a better place. There is, however, even more of a place and need for a warrior of Rapinoe’s pluck, prominence and persistence.

“I meant all of it. And every word of it.” Rapinoe later unapologetically informed CNN anchor Anderson Cooper, her World Cup noticeably positioned next to her like a giant middle finger. Commenting on the rejection of an invitation to the President’s residence she continued, “I don’t think anyone on the team has any interest in lending the platform that we worked so hard to build, and the things that we fight for, and the way we live our lives be co-opted or corrupted by this administration.

“I think it’s an opportunity for this administration to put us on display as ‘guests for the day’ and I don’t think that makes sense for us at all.” 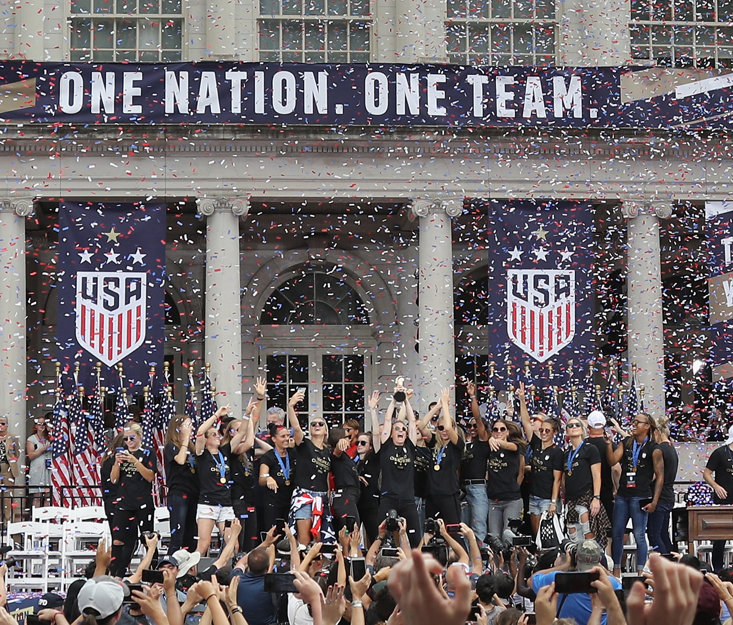 Staring directly into the camera, determined, fearless, unrepentant, on Cooper’s show, she then addressed the President.

“I think that we have a responsibility, each and every one of us. You have an incredible responsibility, as the chief of this country to take care of every single person and you need to do better for everyone.”

The World Cup is primarily about inclusion. Nations, races, religions are coming together from around the globe for the showcase sporting event. There is a fundamental reason why every four years they are the most watched on the planet. Megan Rapinoe chose to grab the competition by its throat, shook it at her commander-in-chief and ‘leader of the free world’. Imperatively, on a platform of inclusivity, Megan Rapinoe had chosen to speak out against exclusion.